New bar, restaurant and cafe openings for 2021 (part one)

In normal times, we’d publish an article about new food and drink openings at least once a month. You don’t need us to remind you that these are not normal times. With Manchester in tiers/tears for the second half of last year and the current lockdown open-ended, most restaurants, new or otherwise, have been unable to actually open.

Although the situation remains dire, we want to stay optimistic and look forward to visiting all the new places that may be on hold but will open as soon as they can, as well as those that opened in the past six months but have closed temporarily or are offering take out options.

We’ve been storing these up, so the list is a bumper one in two parts.

We can’t wait to try them all and give you a more in-depth look at some of them when the time comes. 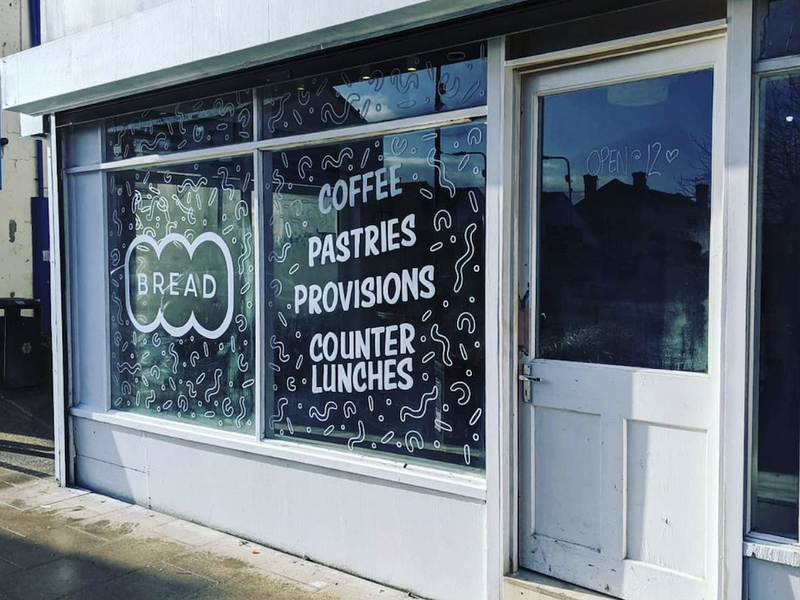 This utterly un-googlable new cafe in Levenshulme opened up a couple of days ago up in the former Indulge Dessert Cafe on Stockport Rd - opposite Isca. Expect a celebration of all things yeasty but this is no greasy spoon. Menu standouts include a potted crab croque monsieur, Comte croissant loaf French toast, and English muffin with fennel sausage patty and IPA cheese sauce. Consider our hopes risen. 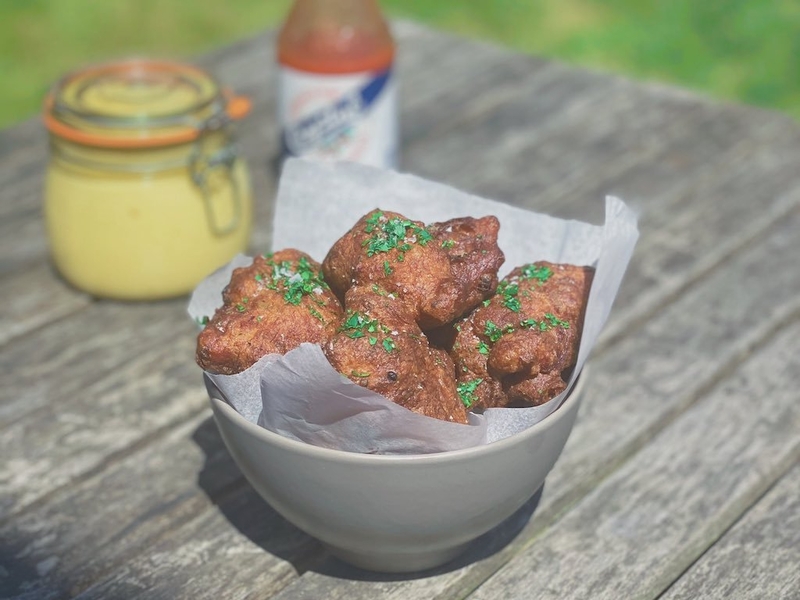 This newbie from Nick Riley who helped launch Ducie Street Warehouse has been in development for nearly two years but rumblings suggest it's getting ready to open soon. With a huge influence from the food and the tunes of New Orleans, the romanticised, insta-filter inspo is all there - let’s hope it’s as good as it looks. The menu’s not been revealed yet but expect the Cajun and Creole seasonings of good ole Louisiana soul food. Teases on social channels suggest crispy chicken, crab, andouille and okra fritters with malt vinegar aioli and a, er, gumbo du jour.  We’re so ready, breaux. 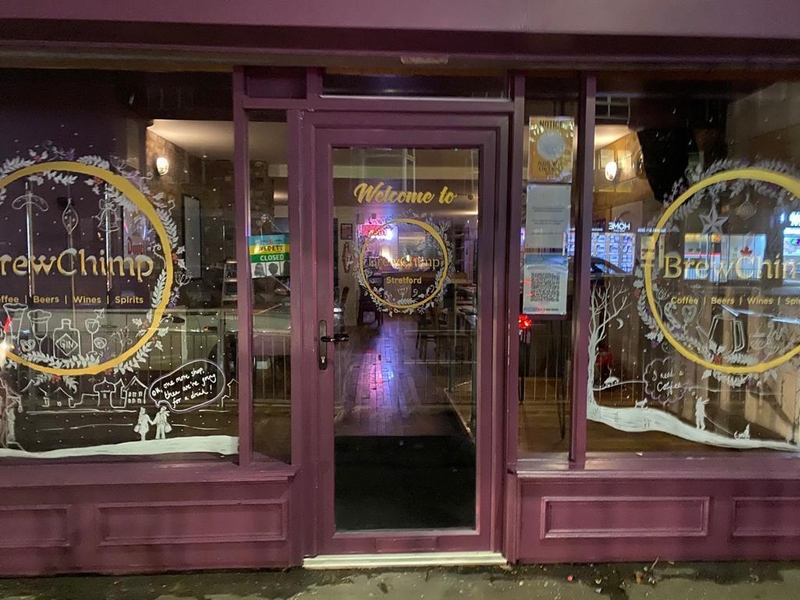 When: as soon as rules allow

The team behind BrewChimp has only been in business for just over two years, already has successful bars in Urmston and Flixton and is now taking over the former Sip Club in Stretford. Two venues in one, BrewChimp will provide a modern bar with music and events in the downstairs space - in-house band Chimp Jam has been raising spirits during lockdown with online events. Upstairs will be the BrewChimp Rupee Room serving 'authentic Southern Indian cuisine’ but in a ‘tapas style’ to go nicely alongside plenty of beer drinking. This young, ambitious independent team hope the bar will bring the community together. When lockdown’s over, we’re all going to need some of that. 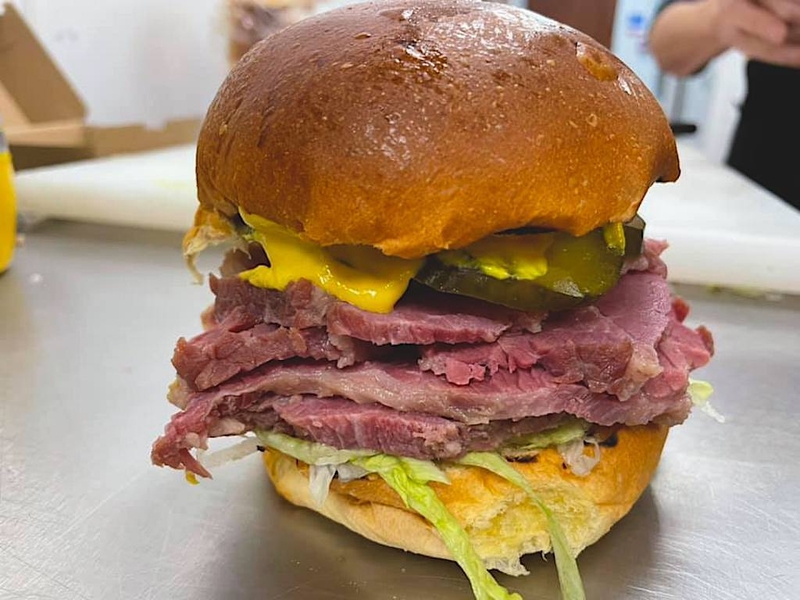 When: open now for takeaway and delivery

‘We do liver and we deliver’ is the brilliant tagline for Celia’s deli and delivery service which opened late 2020 in the space formerly occupied by JS in Prestwich. But if you’re not offaly fond of liver, don’t worry, there’s salt beef on rye, latkes and triple burgers too, amongst other things. If you’ve ever been to a bar mitzvah or a Jewish wedding in Manchester, chances are you’ve already eaten Celia’s food. She’s long been a formidable figure on the party catering scene and now you can hold of her kosher deli food whenever you fancy, no chair bumps necessary. 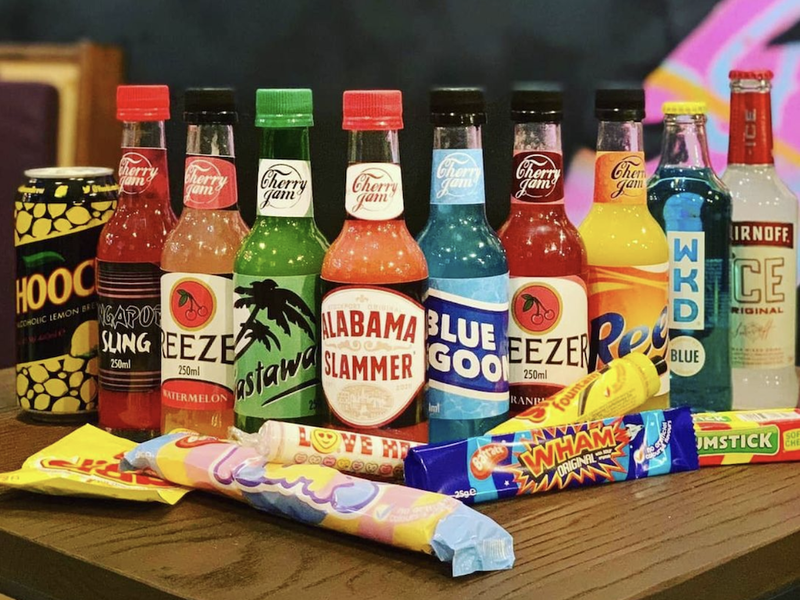 We love the look of this kitsch cocktail bar at Stockport market. We’re talking a dash of nostalgia, a spritz of neon and a few shots of pop-up food (including bottomless brunch) from another local fave Ate Days A Week. Cherry Jam opened briefly back in October but has been doing the hokey cokey like the rest of us since. You can get some super fun bottled cocktails for delivery for the time being though, including a new range inspired by your ‘favourite’ 90s alcopops.

When: open now for delivery and collection only

There are many things we absolutely wouldn’t want importing from the States, including quite a lot of the food actually, but sometimes only deep-fried, carb-laden, melted cheese-smothered junk food will do - and we have to hand it to Uncle Sam for that one. Heading north of the NOLA of the aforementioned Breaux but south of the Colonel’s Kentucky, Cleo’s food is inspired by the country music capital of the USA, Nashville. The menu keeps things simple, centring around spiced, fried chicken with various degrees of chilli-heat. There are hot sauce-dunked burgers, tenders, loaded fries and hot dogs if you’re too chicken. 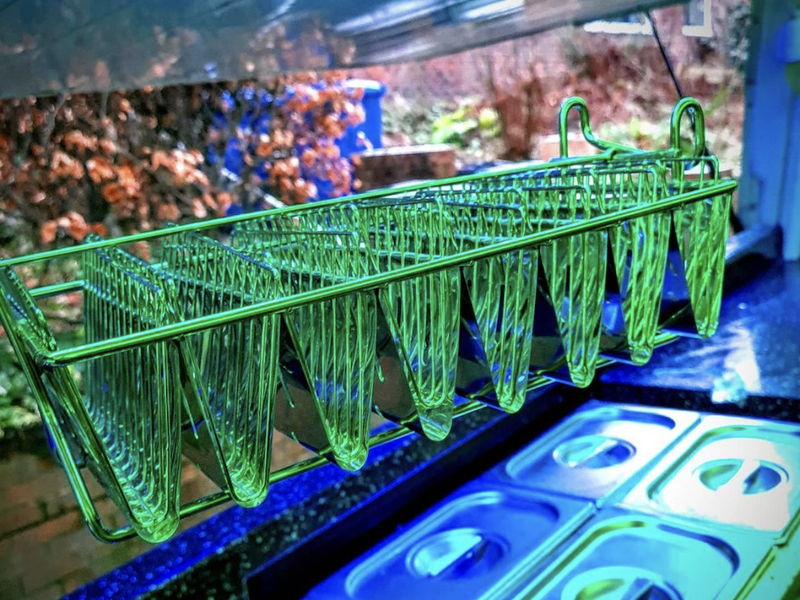 Where: all over Manchester

Crunched - Manchester’s first hard shell crunchy taco truck - plans to dish out its ‘party fuel’ in a different spot every day of the week - lawd knows there are plenty of options. Expect freshly fried, crunchy corn tacos stuffed with exciting stuff like cornflake fried chicken with buttermilk crema, crispy duck with spring onion and hoisin or fried cauliflower with salsa macha. Frozen Margaritas will be pumping from an in-truck slush machine to really get the party started. The man behind Crunched, Ciaran Foy, also runs successful Kenyan-inspired food truck Nyama Choma, which is a regular at the likes of Grub, Levy Market and Media City.

From the team behind Altrincham’s brilliant retro footy bar Libero comes Draft. This team of football, beer, food and wine obsessives are now bringing their passion for all of the above to Sale. Expect interesting local craft beers from the likes of Pomona, Cloudwater and Track as well as conventional and natural wines. 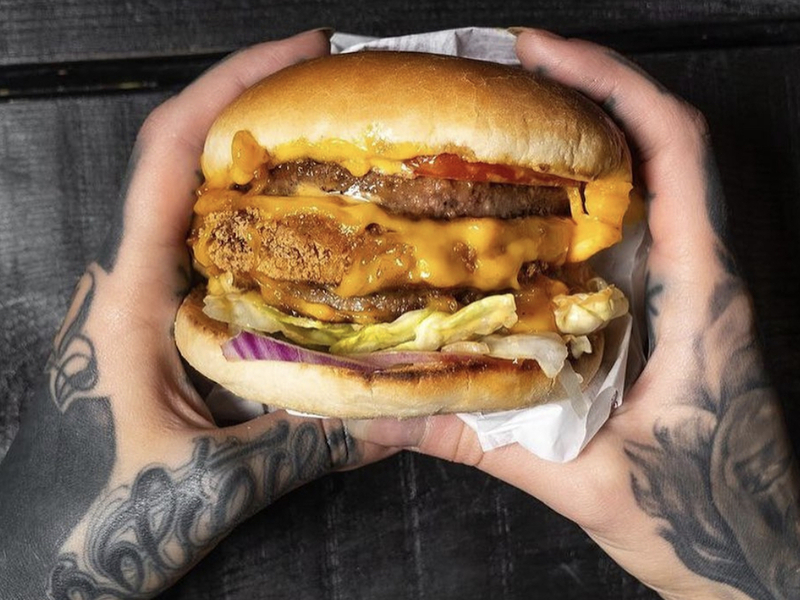 Who knew that having food delivered would ever be as hot as it is now? And ironically, Frost Burgers was already pretty hot. This Instagram sensation with heavily tattooed, You Tuber Monami Frost at the helm finally opened in Manchester a week ago following its runaway success in Liverpool. Everything on the menu is vegan and ready for its close up. This one’s on a delivery only basis, which we might normally gripe about - but right now, that's cool. 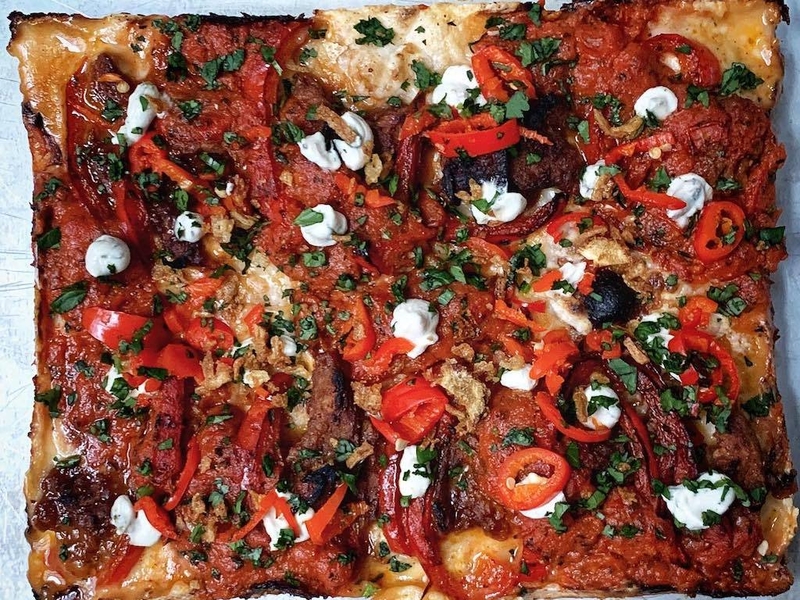 What: Four Side Vegan Pizza

This pop-up pizzeria joins the vegan empire of Dan Hope; the man behind doughnut bakery Krum and its savoury counterpart Plant Grill, both now based at Escape to Freight Island. Launching in what was Earth Café, in the basement of the Northern Quarter’s long-standing Buddhist Centre, it promises a uniquely vegan-only pizza menu - using 72-hour dough, homemade sauces, vegan mozzarella and meat substitutes - in a casual alcohol-free space. If you fancy something sweet afterwards, there’ll be Krum doughnuts on-hand too.

One of a plethora of new openings in new hotspot Prestwich Village, Gorge plans to offer a 'BBQ-enthused flame-grilled bar and bistro with a Latin American vibe.’ Expect lots of wood, tropical plants, vintage knick-knacks and a menu that spans Brazilian feijoada and calabrese sausage to fresh salads and a sun-soaked drinks menu with cocktails and mocktails aplenty (plus lots of red wine, obvs). Work is well underway at the site, previously home to financial offices, with an opening date expected soon, covid permitting. 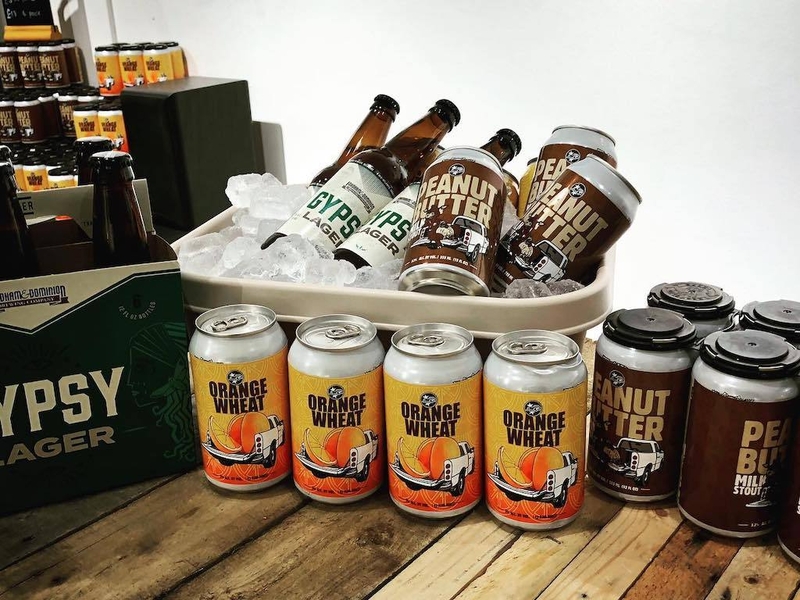 What: Hops and Boogie

Describing itself as a 'vinyl and bottle shop', the tag belies the taste and discrimination that has gone into the liquid element at Sale’s Hops and Boogie (we can’t speak for the records just yet). When it comes to the hard stuff there is a concentration on local producers, such as rum from Salford and vodka from Lancashire. The wines take a more international outlook while the ales are a good selection from basically everywhere. Ideal for this thing we used to have in the old days, I think we called them parties. Until then, check out the owners’ Spotify playlists.

Read again: The French's Adam Reid on why you should (or shouldn't) order his menu boxes 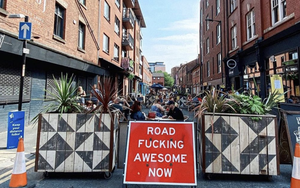 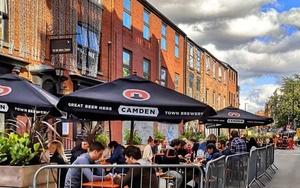