Dan Hope has his fingers in a lot of vegan pies, his empire now includes Krum, an excellent doughnut bakery - in partnership with Paris-trained master patisserie chef Vanessa Regan, and its nutritional antonym Plant Grill — both trading from the much-lauded Escape To Freight Island. He’s now touting his brand new vegan pizza joint, Four Side Pizza which will open in what was Earth Cafe in January. Not bad for a bloke who started out selling fried chicken burgers.

The founder of Firebird Hope which has been feeding kool kids at Hatch and Yes for a few years, Dan became vegan about 18 months ago. A friend, worried about the effect his ‘hedonistic’ lifestyle was having on his health, challenged him to try it for 22 days and he never went back. He reckons it might even have saved his life.

He watched the films Cowspiracy and What the Health? and found the science compelling.

“Someone talked to me about this notion of ‘health span over life span’. It’s not how long you live, it’s how you live. There’s a lot of medical evidence that suggests a plant-based diet gives you a better chance of avoiding common diseases like cancer, heart disease and diabetes. I don’t eat only a whole foods diet, I allow myself to eat the more processed stuff. Nobody is going to argue that pizza is healthy. But I eat a lot of organic vegetables.”

There was an awkward period of a year or so - including a brief stint at The Arndale market - when he had gone vegan but was still running Firebird Hope - selling chicken as well as the vegan alternative. Firebird is now on ice while he concentrates on his newer ideas.

“I started pushing the vegan burger at Yes by making it really cheap and increasing the price of the chicken burger. It worked, but one of the few good things about the coronavirus is it forces you to stop. I thought, actually this is the time. Something good’s got to come out of this and that is that I don’t want to be involved in selling animal products anymore.

“We don’t want people to feel like they can’t eat it if they’re not interested in veganism. It’s got to be completely non-judgemental and non-preachy. I follow a vegan diet but that doesn’t mean anybody else has to. We have a silly phrase: ‘P.S. it’s vegan’. Like, ‘Ha! We got you!’”

The vegan community isn’t exactly known for its lack of preachiness though.

“People who have been vegan for a long time have probably felt they were’t getting heard. When voices aren’t heard they have to shout louder. For a lot of people that follow a vegan diet, it’s much more than that. It’s about doing the best thing for the planet. I think things are changing and the way the vegan community at large is choosing to present itself is becoming more nuanced. There must be an understanding that if you want people to come with you, you can’t alienate them at the beginning. People will increasingly go out and have a vegan meal, or they’ll have a meat-free Monday and they feel good about that. It’s important to ‘allow’ that.”

Dan’s other new(ish) project is Plant Grill, which he describes as ‘high-quality food that’s fun and has a nod to the ‘whole food’ movement.’

“It’s not purely healthy but it’s full of great ingredients. We do a burger made with organic tofu from Yorkshire, an aubergine dish with zhoug, a plant based bowl with giant cous cous. We’re nodding to cuisines that do great vegan food like Asian and Middle Eastern - bringing all those things together. It’s not too expensive and it’s delicious. We’ve got a celeriac shawarma on there. It’s a thing. Noma were the first to do it. We’ve got Holly Fitzgerald who used to be head chef at Allotment Vegan.”

But Plant Grill has so far only managed to trade for 3 days due to the lockdown and new tier 3 regulations. Dan tells us everyone at Freight is hoping for a move to Tier 2 on December 16th.

Back to the pizza. There are a lot of heavy hitters at the Manchester pizza party right now. Is he nervous about opening a new one?

“I’d be lying if I said I wasn’t a bit anxious. I love Nell’s Pizza. Their vegan slices are amazing. It’s bad news for my waistline that they’ve opened in Chorlton. I love Honest Crust at Mackie. There’s already a great Detroit-style pizza place in Failsworth called Corner Slice and there’s a wonderful pizza shop called Bakehouse just opened in Stretford. They’re all delicious and all a bit different.”

However, although most places tend to offer a vegan option, there aren’t any 100% vegan pizza places. Dan says that gives him confidence. He’s also enthused about the space he is moving into, the former Earth Cafe in the basement of the long-standing Buddhist Centre in the Northern Quarter.

“There’s something about that space that makes me feel quite secure. I always felt better about my place in the world when I walked out of there. The way the light comes in through those windows. It’s ace.

“It’s good pizza - we’ve learned how to make pizza properly with a 72-hour dough. It’s a lovely environment. You can come in and get a Krum doughnut and a coffee - assuming we’re in tier 2 - then at night we switch to pizza. Yeah, there are already great doughnuts in the Northern Quarter. Siop Shop and Gooey make amazing doughnuts. But there’s room for another - that’s all vegan.

“So those four things, it’s a lovely space, Krum doughnuts, Four Side pizza and also the fact that it’s alcohol-free. I think that’s enough to say we deserve to be here."

Was it a conscious decision to go alcohol-free?

“It’s alcohol-free because the building is. We had a lot of conversations with Manchester Buddhist Centre about this because alcohol sales form a big part of where you anticipate you’re going to make your profit. It wasn’t something we originally thought of, but now I’m really excited about it because I can’t think of anywhere else that’s like that.

It’s certainly good to have more places to go in the evening that don’t revolve around drinking.

“The 'no and low' sector, as they call it, is the fastest-growing in the beverage service industry. I think particularly younger people are saying, actually, I don’t want to go out and get hammered. Maybe even don’t want to drink at all for a while. It’s a good thing. It’s a point of difference. There might be more people than we know about who want to go to a place where alcohol isn’t present.”

So what about vegan cheese? A controversial subject.

“The best vegan cheese I’ve ever eaten,” says Dan, “is made in Manchester by The Walnut Gatherer. They sell it in Unicorn and Eighth Day. I think it’s cashew-based. There’s nothing processed about it. It’s just delicious. That’s the high-end version - it’s too expensive for us to put on a pizza. We’re trying not to use too much but we’ve got a blend of two vegan mozzarellas. To create Detroit style pizza you push it towards the edge and if you get the temperature right it creates a kind of crown around the pizza which they call a frico.

“We’re also making our own sauces that are not wholly vegan cheese. We’re blitzing up sunflower seeds with miso to make a paste that goes on our mushroom pizza. There’s a cheesiness that comes from nutritional yeast.

“A very small amount of vegan cheese, I’m down with, because it does give the pizza that oozy quality. But you can’t have too much of it. Nell’s vegan slices are amazing and they don’t use vegan cheese at all. Whereas, I’ve tried some of the big hitters in London who use loads of vegan cheese on them and I honestly couldn’t eat it. There’s a middle ground. We’re making some of our own cheeses as well - a vegan mozzarella, which is nut-based. It’s probably more like a vegan burrata but I’ve got to be careful with how I phrase that because an Italian cheesemaker who heard me say we’ve made a vegan burrata would rightly say, ‘You haven’t made a burrata, you’ve made a vegan white ball of niceness.’

“We’re making our own vegan ‘meats’. Jess who worked with us at Yes has worked really hard to create a vegan pepperoni and a vegan n’duja.

“One of our team, Tristan, who used to work for me at Yes had been banging on about Detroit pizzas. It gave us a space to put something out there that wasn’t already there. Detroit pizza is going to have its moment and we thought we were going to be the only one in the city centre. It’s genuinely delicious pizza.”

If you’re embarking on dry January or veganuary in 2021 - or if you’re going the way of the Buddha and attempting both - this should be music to your ears. But whether you’re following a plant-based diet or not, Dan is confident that Four Side pizza will get you in his corner. 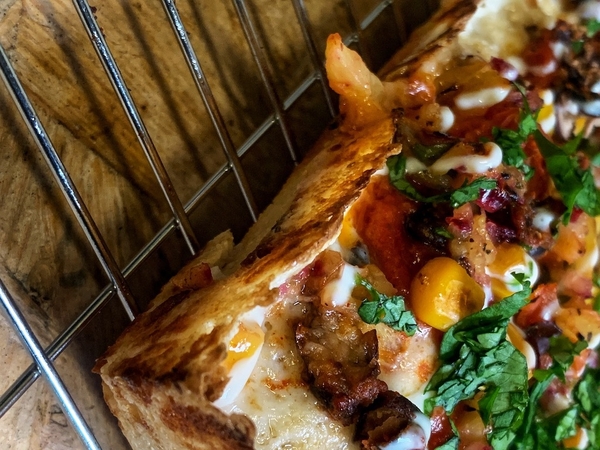 What is Detroit style pizza?

Detroit style pizza, while born in the USA, owes a lot to its Sicilian cousins

It’s a square (or rectangle) pizza with a thick, porous, focaccia-esque base

Its dough and cheese topping are pushed into the corners of the heavy-duty tins it’s baked in to form a golden crust or ‘frico’ of crisp, burnished cheese

Often, the cheese is topped with everything else - including the tomato sauce - giving it its nickname ‘red top’

Pepperoni is the classic topping, Four Side pizza has its own vegan version