The Spärrows – spätzle, sauerkraut and sake in a (very well) hidden archway

Thanks to the engineering works being carried out on the bridges outside Manchester Arena, referring to The Spärrows as ‘a hidden gem’ is definitely fact rather than a cliché. Pathways to the already hard-to-find archways on Mirabel Street are currently camouflaged by scaffolding and plastic sheeting, meaning that you have to go through some kind of obstacle course to get there.

Spätzle translates as ‘sparrows’ because when you traditionally scrub bits of the wet dough into the hot water, they spread out and look like flying birds

But once you do, you’ll find yourself in a calm world-apart. For opposite the Zen-like Umezushi Japanese restaurant, a new venue has opened, serving continental pasta and spätzle. 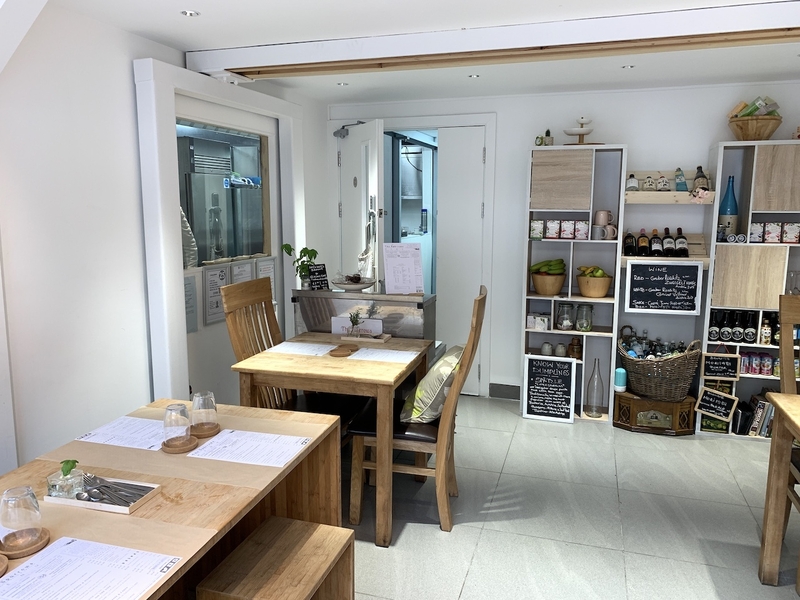 The interior of The Spärrows is a calm, neat and neutral space with room for only ten diners on German engineered, pale wooden tables. Polish radio crackles out chat and tunes in the background and, on the back wall, wooden shelves display a small selection of wine, beer, sake and soft drinks. An interior window offers a view of the spacious kitchen behind. But don’t let co-owner Kasia Hitchcock hear you refer to all this as ‘fusion’, because she considers that nonsense. To her, this natural cultural melange makes absolute sense.

Kasia is Polish and her partner, chef Franco Concli, is from Trentino in the very north of Italy, which shares food influences with neighbours Austria, Germany and Switzerland. “What we’re trying to bring here is ‘beyond the borders’ cooking,” explains Kasia, “so we picked a dish which represents all those countries and we’re going to bring the best spätzle to Manchester.” 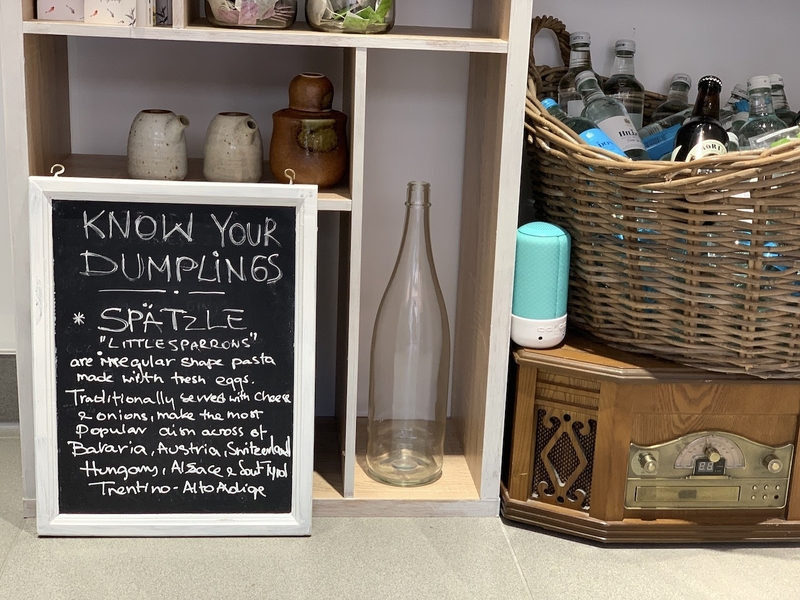 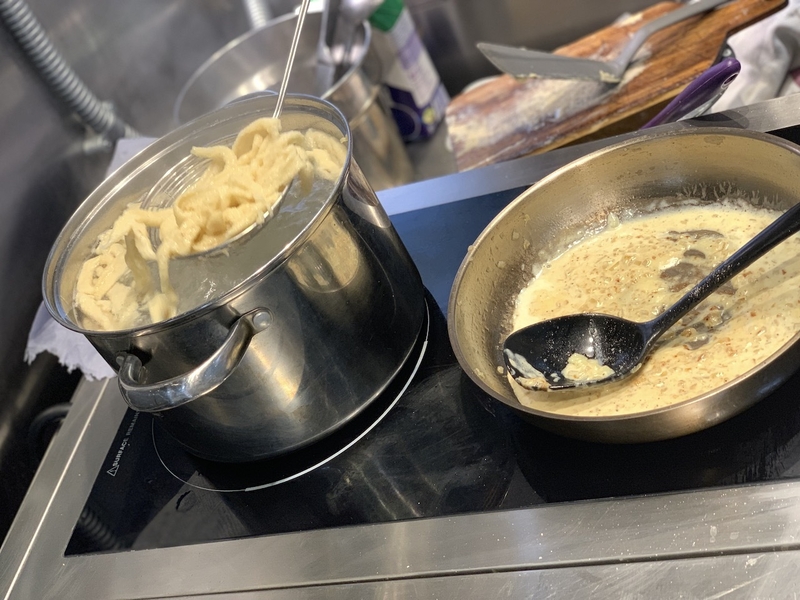 Kasia’s background is in supplying Japanese sake to various clients including Umezushi. The couple upped sticks from London only recently and moved to Manchester, attracted by the city’s vibrant energy and size.

The Umezushi team has refurbished the arches opposite their restaurant, converting them into ‘Kitchen In An Arch’ - a production kitchen.  Kasia asked if they could utilise the space to establish their new brand, The Spärrows, in the hopes of moving to bigger, more permanent city centre premises in the near future. 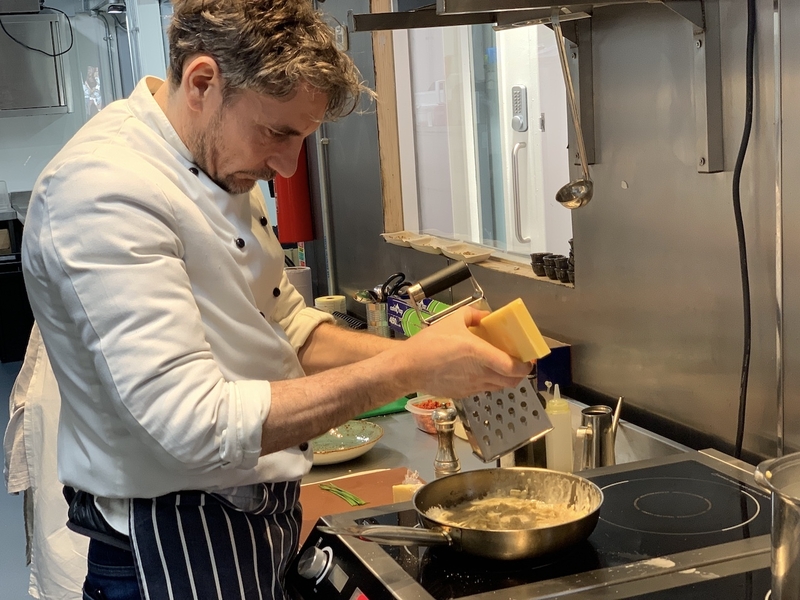 But first things first, what exactly is spätzle?

“It’s Swabian dialect from the south of Germany,” explains Kasia. “Spätzle translates as ‘sparrows’ because when you traditionally scrub bits of the wet dough into the hot water, they spread out and look like flying birds. It’s a fresh, pasta dough made with eggs, water and flour, salt, pepper, nutmeg. Very easy to work with and you can add all kinds of ingredients and sauces to make them even more delicious.”

At The Spärrows customers can choose to eat their spätzle in several ways including simple butter and sage, the traditional Alpine way of Emmental cheese and braised onion, or with an indulgent mixture of chorizo, cherry tomato, spinach and cream. Its richness easily balanced thanks to a chilled glass of Austrian Grüner Veltliner and a side of Kasia’s wonderful sauerkraut super salad with seeds, fresh coriander and dried cranberries. These are dishes that have been designed for fuelling a climb up mountains or skiing down them.

Franco also makes a range of central and eastern European dumplings, as well as handmade ravioli, fresh cut papardelli and gnocchi. “If you ask the average person on the street about dumplings, they’ll probably mention Asian rather than central European dumplings such as dim sum or gyoza,” says Kasia, “but the range is actually amazing.”

Kasia was born near the Ukranian border where they love to argue about who invented pierogi. Could it actually have been the Mongolians who spread dumpling culture across both Asia and Europe? “I don’t think so,” laughs Kasia, “I like to stick to the idea that it was my grandmother who invented them.” They make two types at The Sparröws, one with potato and cheese and another with sauerkraut and mushroom.

I try a plateful of Russian pelimeni, stuffed with minced veal and garnished with a coating of crunchy panko breadcrumbs laced with garlic butter. They’re much more delicate than you’d imagine, and you can see the Italian influence has given them a lighter touch.

The Spärrows opens from 10am (Tues-Sat) and is currently doing a roaring breakfast trade supplying the bridge engineers with freshly baked focaccia sandwiches and their special Sparrows breakfast of scrambled eggs, spätzle (of course) onion, cheese, peas, pickles and Vilenska smoked sausage. 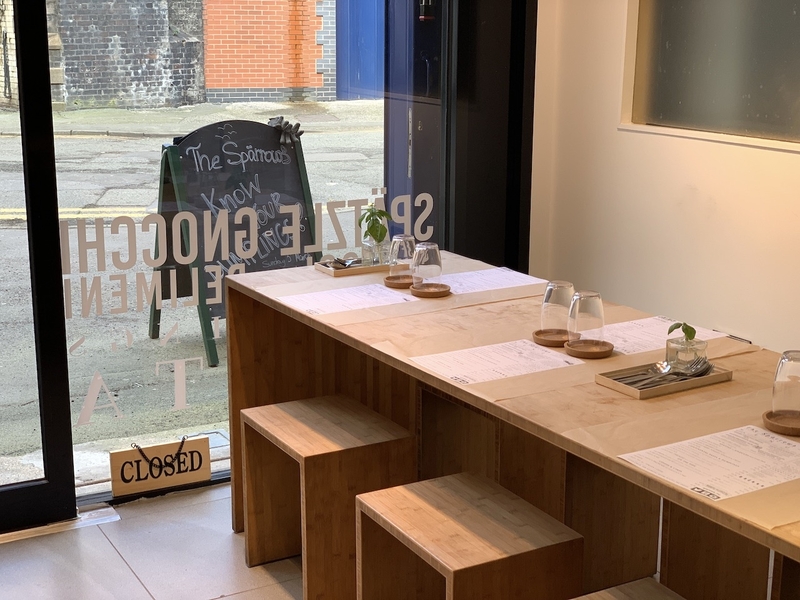 They have proved an immediate hit with their neighbours who live in the surrounding flats, many of whom pop in for a mid week dinner, a take out or even ask Franco to cater for parties and events. They also run a series of hands-on supperclubs through Eventbrite where guests can make their own spätzle, gnocci or dumplings before sitting down together to eat and drink.

So after spending an hour talking to Kasia, the natural coming together of these seemingly different cultures really does make sense. After all, when you eat a fry up along with a cuppa made with tea leaves from Sri Lanka, India or China, no one thinks to call that fusion food. And so it is with the ubiquitous dumpling, which goes equally well with Japanese sake as it does with Austrian wine, Russian vodka or Italian soft drinks – all of which can now be found in Manchester’s newest spätzle place.