Blue Monday is looming large. The crucible of constant scrolling bad news, social deprivation and miserable weather means that any way we can bring a little bit of joy into our lives right now is worth noting.

Although some hardy souls are making a good go of veganuary or giving up the booze for Dry January, many of us are not up for any extra self-flagellation.

If funds allow for such luxury, a lovingly put together meal kit from one of our many incredible chefs and restaurants - themselves feeling their way through the darkness and disorder right now - can bring a very welcome bit of sparkle in the gloom.

Whether you’ve an upcoming birthday or another anniversary to celebrate, you want to send a pick-me-up to a loved one, or you just feel like doing something to cheer yourself up in these utterly cheerless times, these boxes of culinary cuddles will see you right. 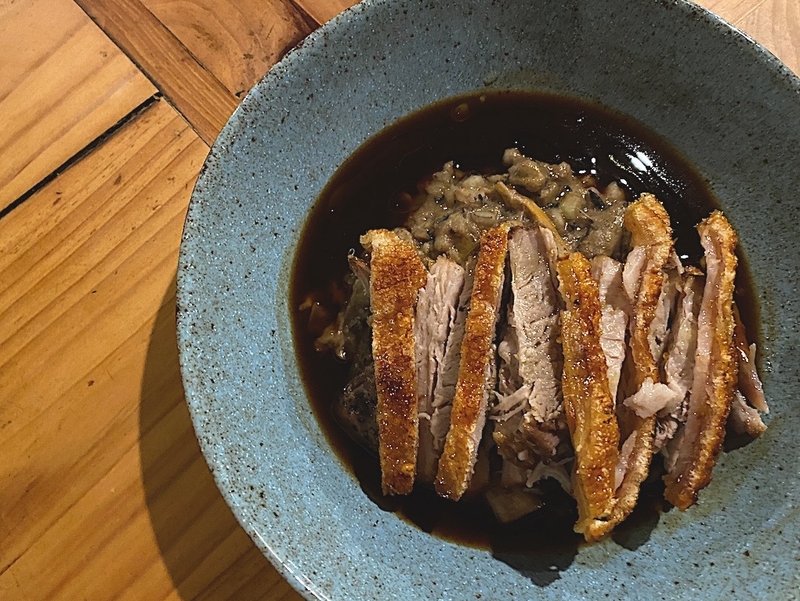 What: Menu Box by Adam Reid

How much: £90 for two including nationwide delivery

Executive chef at The French at The Midland Hotel and star of the Beeb’s Great British Menu, Adam Reid’s menu boxes are an ever-changing homage to impeccable local produce, meticulously prepped by the man himself. They’re remarkably easy to put together, thanks to Adam’s down-to-earth, detailed instructions and empathic understanding of the limits of the home kitchen. But effortless as they may feel, the end result is a seriously decadent affair. This week’s box contains Pollen bakery ‘French’ malt loaf & beef butter, hand-rolled strozzapretti pasta with chicken cream sauce & truffle vinaigrette, roasted lamb rump, aubergine mash & pickled peppers and Yorkshire rhubarb jelly, cold custard & ginger biscuit. We've tried this twice now, and both times it's been an absolute joy. 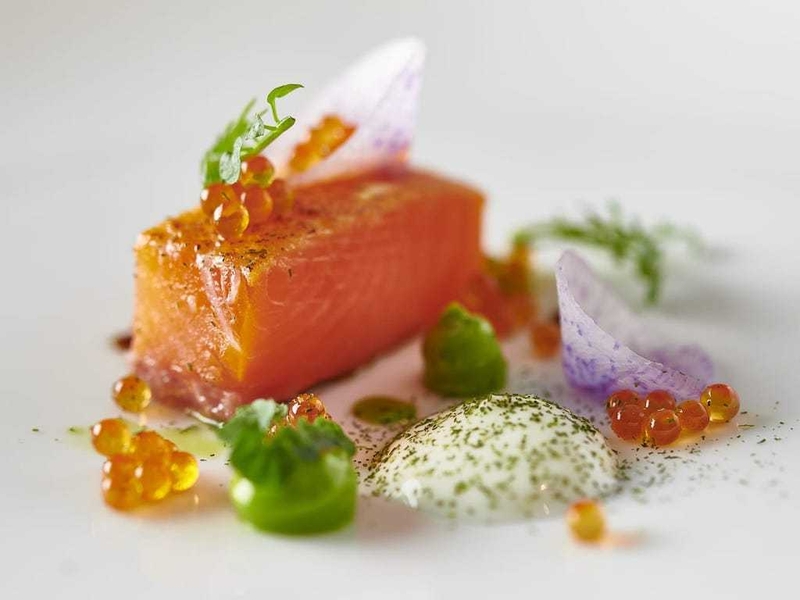 What: Angel at Hetton

How much: £60pp including nationwide delivery

Awarded a Michelin star in the most recent distribution - last year’s has been postponed, The Angel at Hetton’s head chef Michael Wignall has won a Spangler for every kitchen he’s been in charge of since the 90s. So it’s a whole constellation that has sprinkled its dust over this particular meal kit from up in th’ills near Skipton. The menu changes regularly with the current selection incorporating dishes like lightly cured chalk stream trout, ponzu roe, seaweed salad, dill oil & yoghurt and Lakeland lamb loin, Jerusalem artichoke, boudin noir, kale & Douglas fir. There’s cheese from Courtyard dairy too. 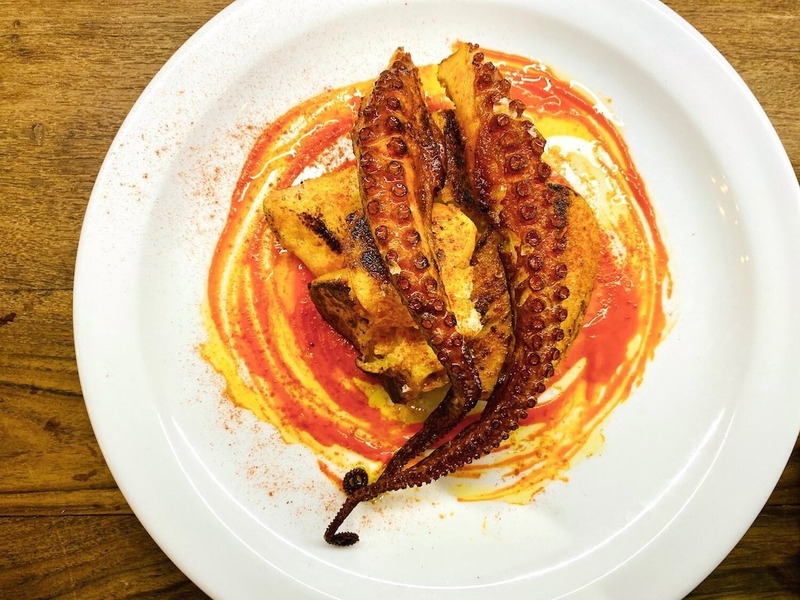 We’re big fans of the Basque-tastic Baratxuri but while we’re keeping our movements to the minimum, neither a trip to San Sebastian or its North of England equivalent, er, Rammy is on the cards for us right now. We were thrilled to welcome a Baratxuri outpost to the city centre at the brilliant Escape To Freight Island but even outdoor venues like these remain off-limits. Never mind, the recently launched meal kits for two from Rachel Stockley and crew are the next best thing. There are various main course options to choose from including a Pintxo box (sold out at time of writing but keep an eye on socials for a restock), squid ink rice with Argentinian red prawns or a hefty Galician fillet steak with mushrooms in Oloroso sherry & black garlic potato purée. You can add a bottle of wine or two if you like, recommendations for good matches are given on the website. Delivery is mainly to North Manchester within a close radius of Ramsbottom but email bar@baratxuri.co.uk to see if they can come your way. 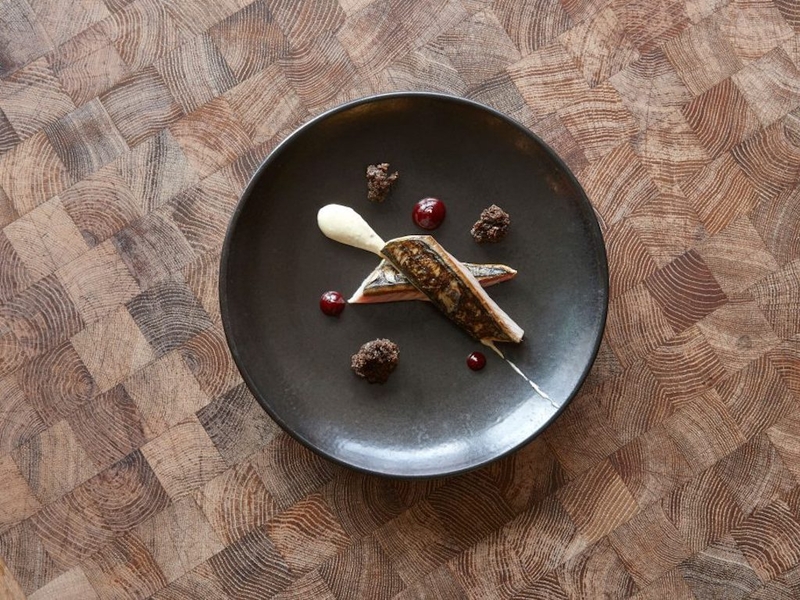 This Chorlton shrine to all things unctuous is probably on a lot of people’s hit list for those ever-more-doubtful ‘when things get back to normal’ dinner parties of the future. But let’s try not to dwell on that uncertainty and instead focus on the certainty that owner/chef and all-round wonder woman (see her work with Eat Well) Mary Ellen McTague will look after you very well - albeit remotely - if you order one of these meal boxes. About to start up again after a short post-Xmas hiatus, from 23rd Jan the new style menu boxes will provide Saturday night suppers featuring wines and dishes from different regions. Kicking off with Greek wines and dishes on Saturday 23 January, then Northern Italian food and wines on Sat 30 January, there are plans to also explore Istria (northern Croatia), Germany, Southern Italy and Northern France. Delivery is only to M21, M16, M20, M32 (you can collect if you’re elsewhere) but there will be some special nationwide delivery hampers for celebration dates like Mother’s Day in the future. 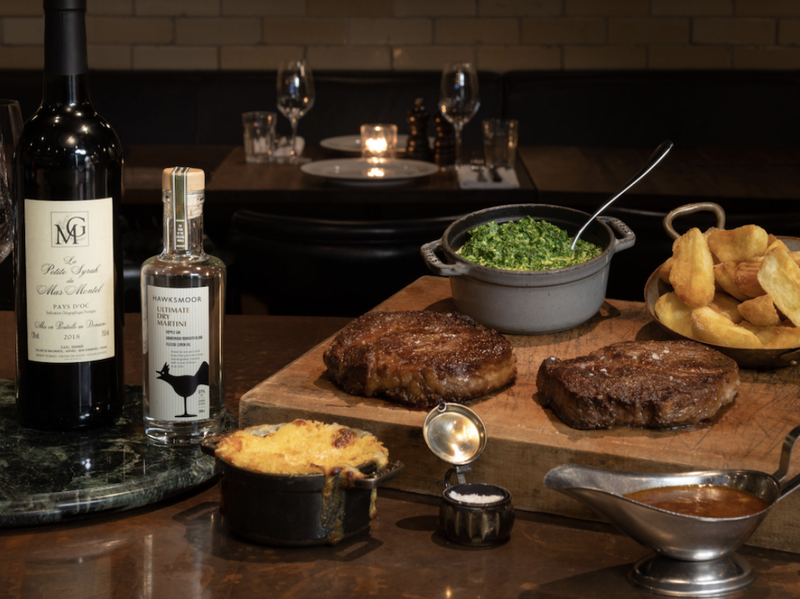 What a treat it used to be to visit Hawksmoor, it’s hard to find a carnivore that doesn’t adore it. It’s also one of the places we miss more than any other for a proper cocktail. While the reverberation of lively chatter, clinking glasses and energetic buzz of a bustling dining room are hard to recreate at home, Hawksmoor has packed in as much of what you love about a real-life visit as possible to its at-home kits. The current rib eye box for January includes two British 35-day dry-aged rib-eye steaks, Matt Brown’s ultimate oven chips, creamed spinach, macaroni cheese, bone marrow & Madeira jus (for bone marrow gravy), Hawksmoor’s Ultimate Dry Martini for 2 and a bottle of Montel Petite Syrah. We really rated the porterhouse box we tried last year. These also sell out sharpish so you might want to get ahead and order one for Feb now. 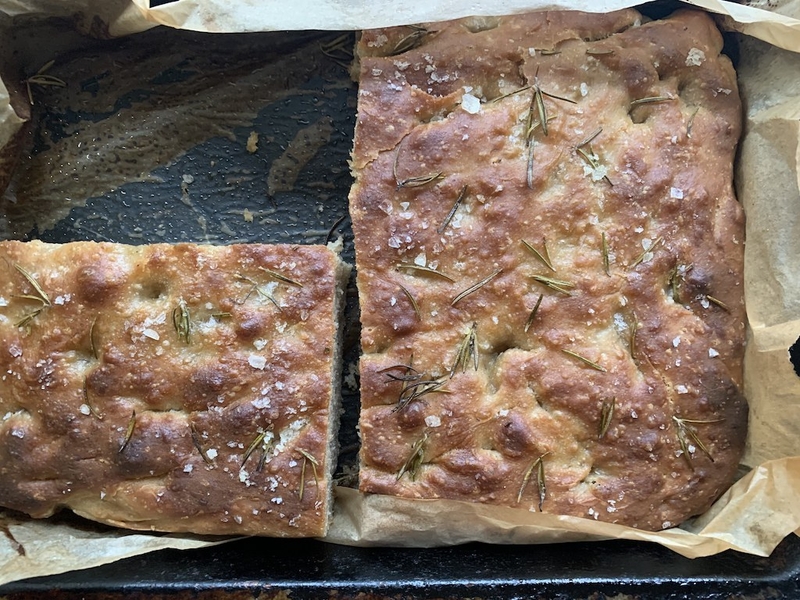 What: ISCA at home (main pic)

A newcomer to the meal kits crew and still relatively new on the Levenshulme food scene (especially if you rightly consider last year a write-off), Isca’s owners Caroline Dubois and Isabel Jenkins are far from new to the hospitality game. The former an experienced sommelier specialising in natural and biodynamic wine and the latter a supper club queen with a passion for all things local and low-impact, this dream team is bang up to date in its approach to dining well. Launching on Friday 22 (on sale from the 15 Jan) each kit will contain snacks, a main & side dish and a dessert for two - the first menu includes rosemary sea salt focaccia, miso onion, caper & Ogleshield tart, roasted beetroot, smoked ricotta, pine and walnut and Pump Street chocolate cremeux with blood orange and sesame  - along with either a bottle of natural wine or an Isca-made soft drink. Kits will be limited so put a note in your diary. Delivery to M1-M4, M12-M21 and SK4-SK6 is £3 or you can collect between 12-5pm on a Friday. 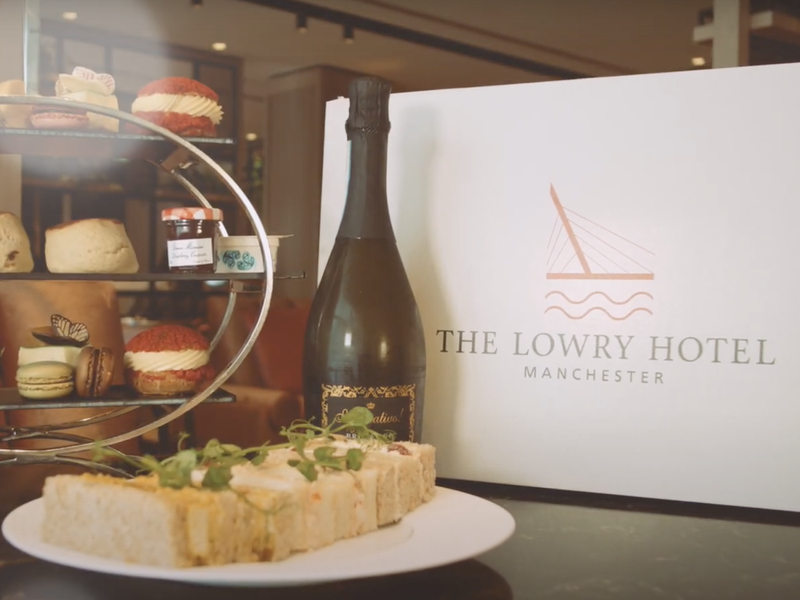 How Much: £60 for five courses and a bottle of wine for 2 people

Executive Head Chef Dave Ashton has put together a number of cook-at-home packages including Sunday roast and Afternoon Tea ones. But it’s the five-course dining package that you don’t want to scroll past. The menu changes regularly, but the current one includes sourdough with chef’s special chicken fat butter, Cornish mackerel with peanut sauce, compressed cucumber and pickled carrot, pork fillet wrapped in Parma ham & basil, and both cheese (blue, with gingerbread) and dessert (chocolate cremeux) courses. We’ve tried the Sunday roast and the attention to detail and luxurious feel left us seriously impressed. We’ve no doubt this one is worth your attention. 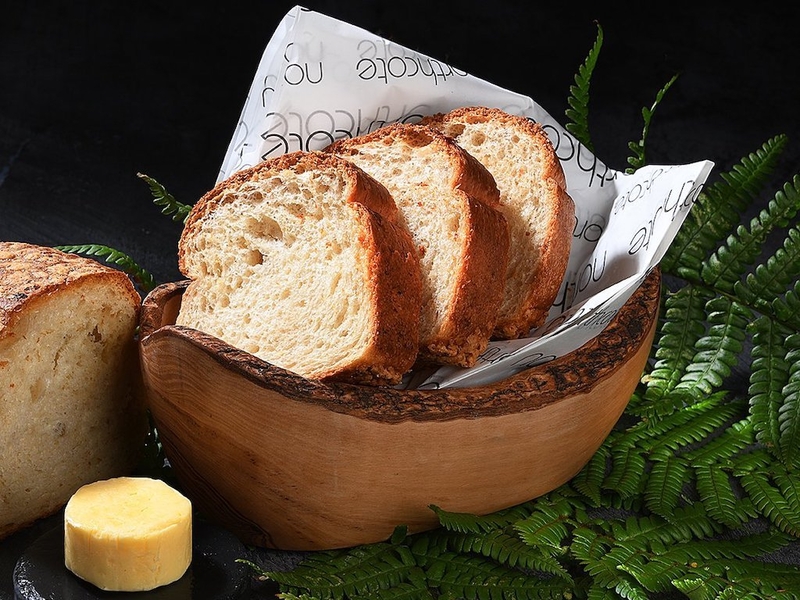 How much: £120 for two including nationwide delivery

It was easy to root for Lisa Goodwin Allen when we watched her on The Great British Menu at Christmas. She’s humble, generous, and a proper Northern lass - as we found when we interviewed her a couple of years back. She’s also a damn fine chef, having been part of the Michelin star brandishing team at Northcote since she was just 20 years old. Now with the title of exec chef, Lisa creates some of the most perfect fine dining menus in the land up in those rolling Lancashire hills. Her gourmet boxes provide a taste of that perfection at home and include dishes from or inspired by her appearance on the telly as well as restaurant favourites like her famous Lancashire cheese bread. These boxes always sell out on the day of release, so set an alarm and get Glasto-ticket-giddy. 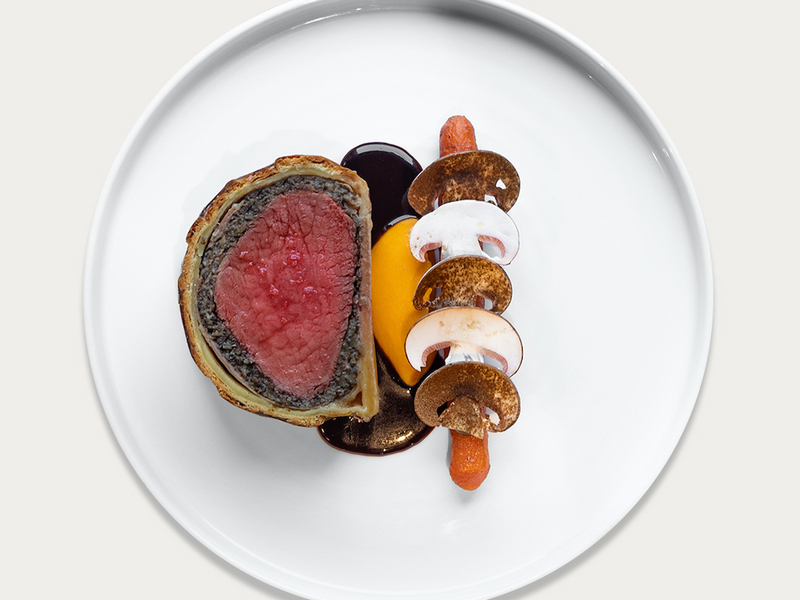 What: Six By Nico Masterclasses

How Much: From £30 for two with a half bottle of wine

Does Nico Simeone, the godfather of the Six By Nico brand, ever sit still? While half the world is spending lockdown learning to play the ukulele, completing Netflix or rocking in a foetal position much to the perturbment of the cat (just me?). Nico has reinvented his brand multiple times. The man obviously likes variety, as his six-weekly-rotating six-course menus in multiple cities attest. It doesn’t seem like five minutes since he launched HOME-X, following on from the original Home By Nico kits. Now, the sprightly Scotsman has launched a series of masterclasses in which he guides you, by er, ‘private video’, through the creation of a number of special dishes. So, cookery classes for the lockdown generation then. His first week of boxes sold out fast - possibly to do with the fancy half bottles of wine included for gratis - but keep an eye on the website for the new release coming this Friday at 9am. 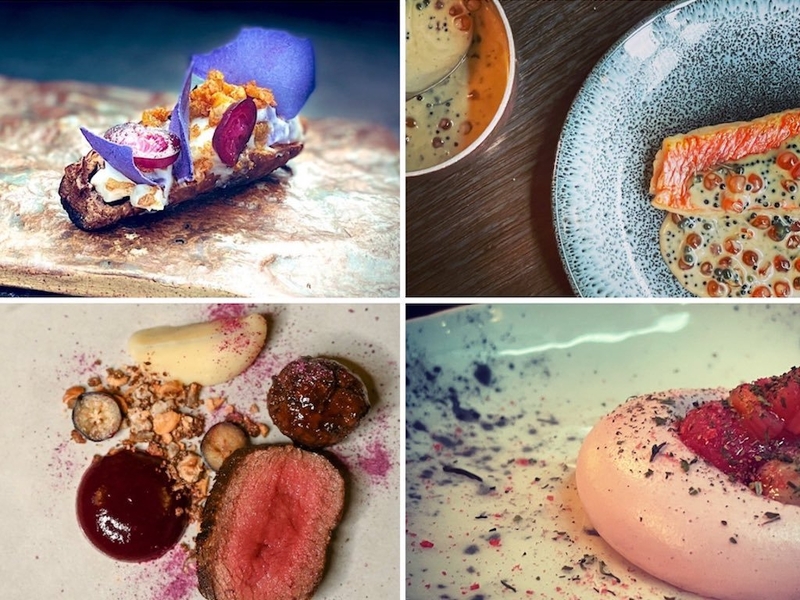 Simon Wood was on it like a cartouche bonnet with cook-at-home kits back in the heady days of lockdown 1.0. His was one of the first we tried, feeling like we were putting together a gigantic, culinary kinder egg toy. He’s since tweaked, perfected and got creative with brand new menus. Not one to stick to mundane ingredients, Simon’s menus are full of the kinds of fine dining fodder that until now you would never dream could be included in a home delivery. Along with slightly more familiar fare like red mullet, Jerusalem artichoke and rhubarb, the current five-courser features lacto blueberry, mugwort cream and Meadowsweet which all sound like they’d be more at home at a Hogwarts banquet than a home kitchen in Salford. One for the adventurous.

Hungry for more? Here are a few others worth exploring...

All of these deliver to (or can be collected from) Manchester:

Duchess’s Choice from the Devonshire Arms - Another in the culinary Mecca of the North that is Skipton, many a chef from this stable has won a Michelin star.

Made In Oldstead by Tommy Banks - This youthful Michelin star chef is a regular on TV shows like The Great British Menu and Saturday Kitchen. Well established meal boxes, now with veggie options.

The Art School - These are click-n-collect only from Liverpool but well worth your time if you live nearby or when travel rules relax a bit. Head chef Porky Askew is magic, as we found when we tried a box last year last year.

Evuna cook-at-home tapas — Evuna isn’t delivering these but has just launched its heat-at-home version of tapas for collection, a welcome alternative to the danger of squashed, lukewarm croquetas delivered by bike.

Read next: 15 of the best vegan menus delivered in Greater Manchester

Read again: Updated - Where can I still get... a roast dinner?