As Manchester's hospitality scene buzzes with pride following last night's Manchester Food & Drink Awards, we want to tell you about some newcomers. You'd think this year would have been totally bereft of new openings but they keep on coming. Here are some places have recently opened or are just about to.

Far from slim pickings, we welcome Slim Chickens, buffalo dumplings and long bois as well as a flurry of activity in North Manchester. 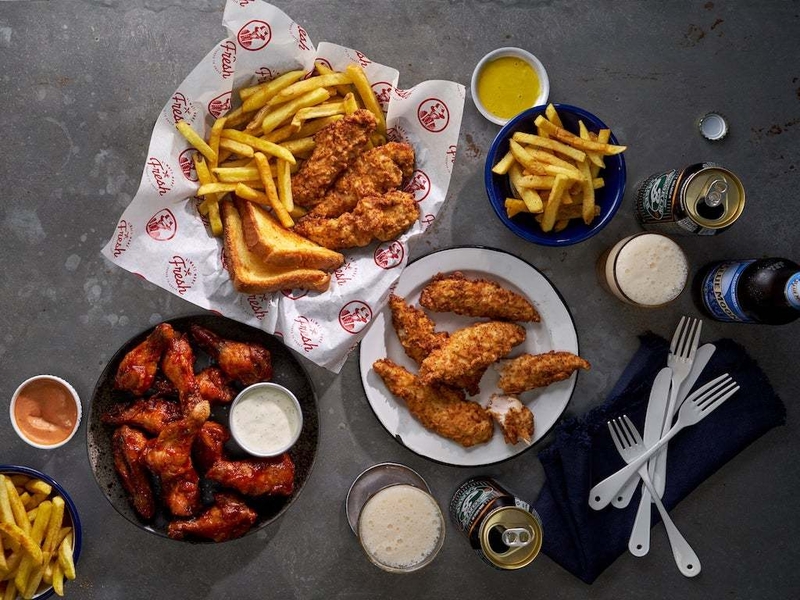 Yankee doodle do! This USA-hatched southern fried chicken brand will open its biggest restaurant to date in Manchester in November. Tom Gordon and Greg Smart tested recipes in their garage before going on to open the first Slim Chickens in Fayetteville, Arkansas, in 2003. There are now over 100 sites in the US and this is the 9th in the UK. Their buttermilk-marinated, hand-breaded and cooked-to-order premium chicken is served alongside a batch of 14 dipping sauces including Slim’s signature sauce, blue cheese, honey BBQ, sriracha garlic and ‘the fiery Inferno’. Pluck in to your chicken in the form of tenders, sandwiches, wings, salads or wraps with sides including ‘Texas toast’ fries, fried pickles and mac & cheese. There’s also milkshakes, a Slims IPA and cocktails including the Corn Star Martini. Deliveroo, Just Eats and Uber Eats will bring it straight to your coop. 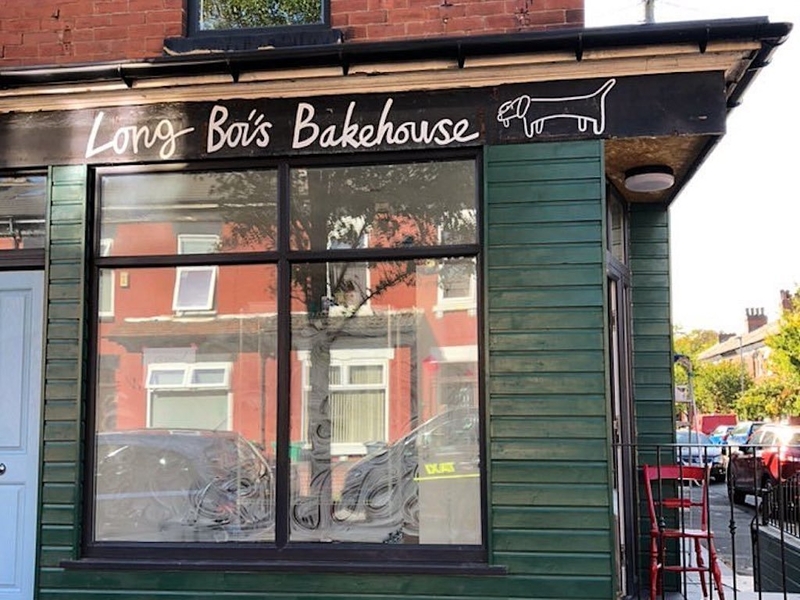 Whether the name is in reference to the sausage dog on the sign, an obscure internet meme or... something else, we’ve been anticipating this one for a very long time, boi. Ever since whispers emerged after a much praised pop up at Full Fat Festival well over a year ago. Now it’s so close we can almost feel the sugar rush. The trio of bakers behind Long Boi’s have the likes of Siop Shop and Pollen in their back catalogues and have been baking sweet treats like homemade vegan pop tarts for Common of late . Now joining the ranks of Leve’s enviably diverse food and drink scene they are putting the final licks of paint to the walls of their very own place and getting ready to, 3, 2, 1… BAKE! 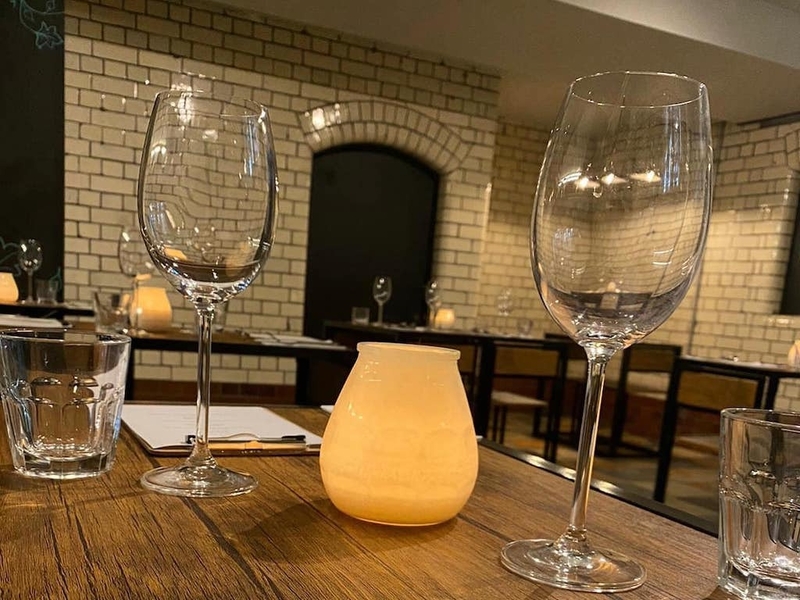 What’s going down at vegan NQ cocktail bar Alvariaum? The restaurant. It’s moved to the basement and has relaunched with a new name and a fresh approach to go along with its subterranean makeover. Black Leaf is Masterchef semi-finalist Adam Leavy’s latest creation. Gone are the casual small plates replaced by a more formal three-course affair. But the traditional approach doesn’t extend to the dishes themselves, you’ll find innovative vegan dishes like white onion and espresso risotto with shallot & redcurrant jam, confit aubergine & onion ash, roasted banana blossom with courgette peperonata, charred gem lettuce, curried yoghurt & crushed peas, and an alarmingly realistic looking vegan scotch egg made from.... turnips.

View this post on Instagram
Hope you all had a great weekend and thanks for all of you that made it over to see us. We appreciate your continued support 😉⠀ ⠀ We will be back open from Thursday @ 10am.⠀ ⠀ If you want to book a table, drop us an email on bookings@thegoodsin.co.uk ⠀ ⠀ ❤️❤️❤️⠀
A post shared by The Goods In (@thegoodsinmcr) on Oct 5, 2020 at 9:59am PDT

What: The Goods In

From the team behind local favourite All The Shapes comes this substantially sized drinking and dining spot on the periphery of Heaton Park, a short stagger for the tram stop.  This former warehouse, that opened in July, has been given a thoroughly modern makeover with lots of gleaming glass and a bright, colour-pop interior. The bijou menu features impressive-sounding dishes like roasted globe aubergines with green hummus, sumac chickpeas, tabbouleh & pomegranate yogurt or a pork and apple hotdog on brioche with celeriac slaw. There’s brunch available too along with doughnuts and other sweet treats by local Italian Lupo Caffe. With a wide range of local and guest craft beers & curated cocktails as well as home comforts like a wood burner and a social-distancing friendly outdoor seating area, this should be a great addition to Prestwich. 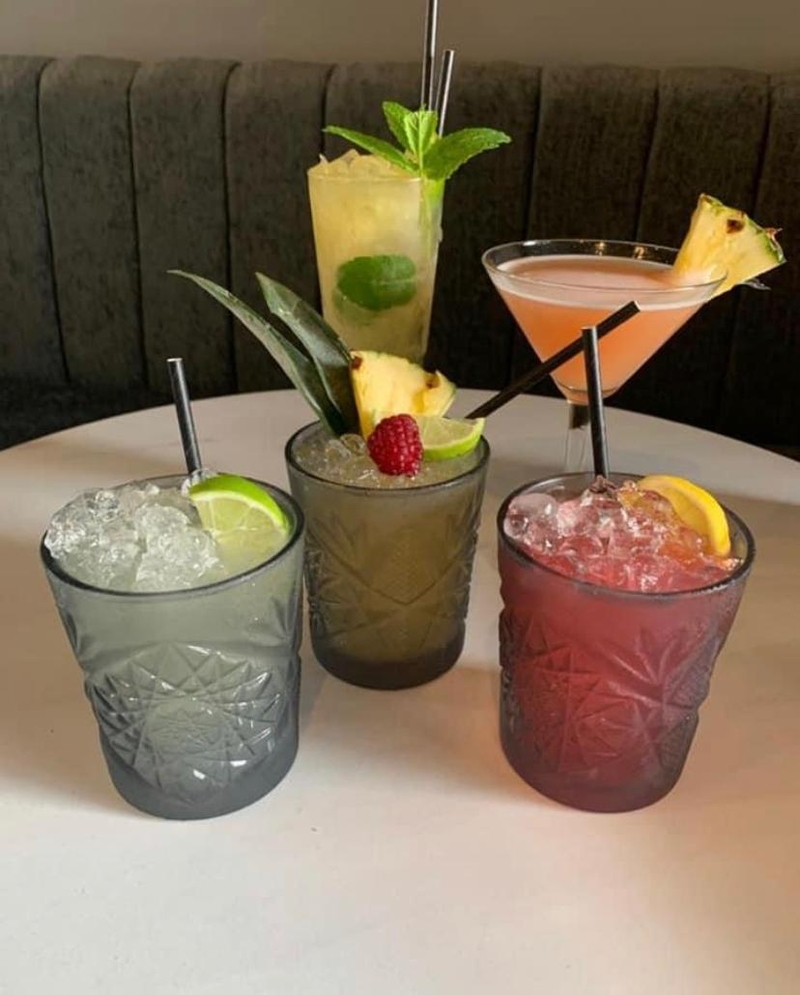 From seasoned restaurant-opener David Gale (Abode, One88, Peru Perdu…) comes a hot new place to eat in… Denton. The Post Room is a stylish new neighbourhood restaurant bringing something fresh to Tameside. On the menu, expect smartened up British classics like a honey glazed bacon chop with duck egg and griddled pineapple, a spicy take on fish n chips with gunpowder potatoes and a classic burger. There are cocktails and an extensive wine list and something for the Instagram generation too, in the form of a giant mural of spray painted wings to pose in front of. 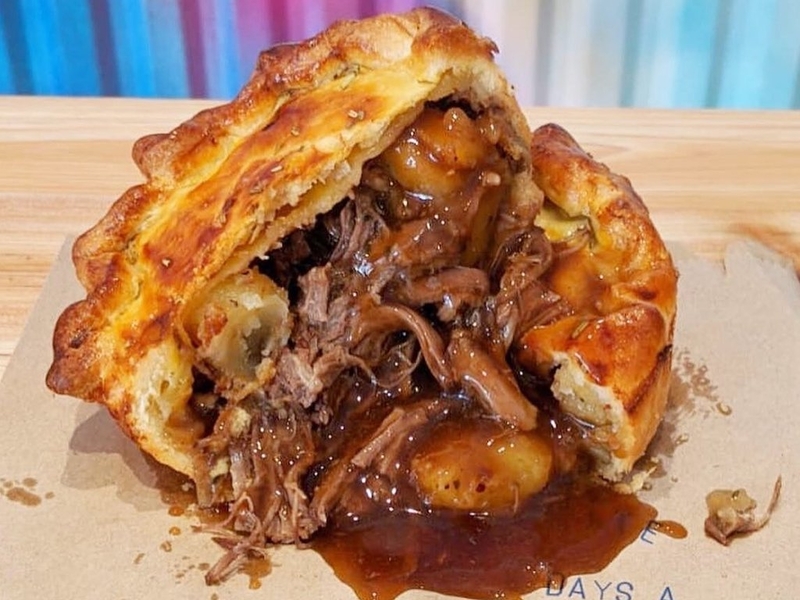 What: Ate Days A Week

It’s certainly pie season and the Confidentials team have spent an unhealthy amount of time ogling pictures of the ones at this new gaff in Stockport. Pies come in a choice of steak & red wine gravy, rosemary lamb, potato & mint, honey roast ham, cheese & onion or wild mushroom & sweet potato and are served with mash or triple cooked, hand-cut chips & gravy. This ‘gourmet delicatessen’ also does a puntastic line in chunky toasties and butties all named after songs, sort of: ‘Favourite Wurst Nightmare’ (with grandad’s sausages), ‘The Bartender & The Beef’ and (oh christ) ‘Live Forcheddar’. There’s a range of craft beers, cocktails and the usuals too. 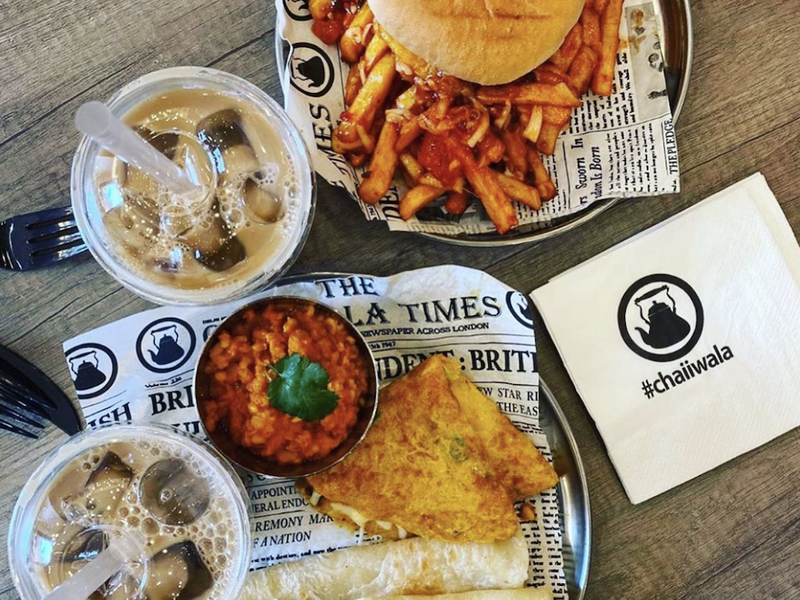 This Delhi-born chain - founded in 1927 - was given a new lease of life by the grandkids in 2015 and is now growing worldwide faster than you can say Madhur Jaffrey. Its first Manchester store recently opened in Cheetham Hill with this second one in Leve hot on its heels. Expect saffron and cardamom scented Indian karak chai to take away or linger over in a slick coffee shop setting with an ace little street food and brekkie menu to boot. How does a masala chip butty or a deli breakfast with omelette, roti and dahl sound? There are other hot and cold drinks too including the famous Indian falooda - an ice cream milkshake with vermicelli and rose syrup. 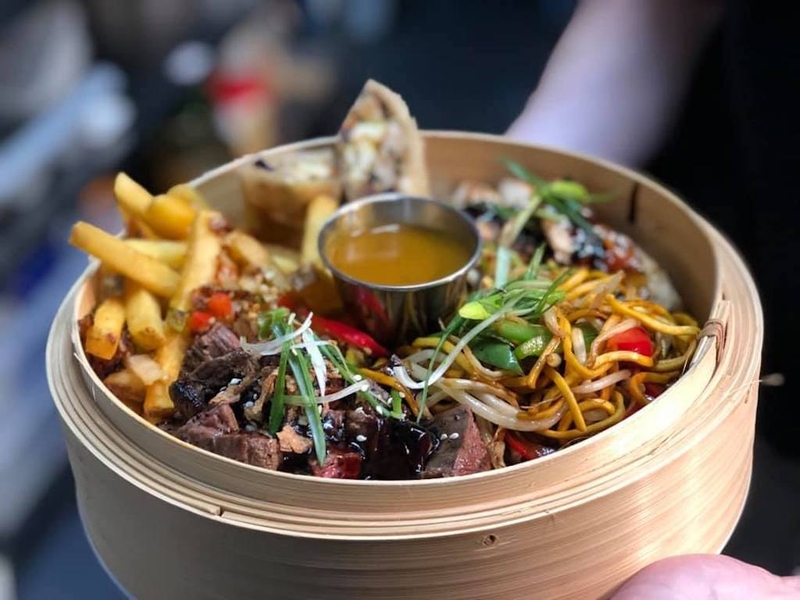 When: soon, we hope

Back in early 2019, Ruth Allan reviewed the then new ‘British Chinese’ restaurant in Altrincham and declared that there would be ’wows everywhere before you know it’. A second branch in Rochdale - currently temporarily closed - opened just few months later and now there is to be a third in Swinton. Lucky locals will be able to get a load of Henry Yau’s modern Chinese menu. Highlights from Alty include HK beef brisket curry, the new buffalo chicken dumplings and  Yau’s many ways with crispy duck: on nachos, in bao, loaded up on fries and stuffed into spring rolls. How soon is Yau? 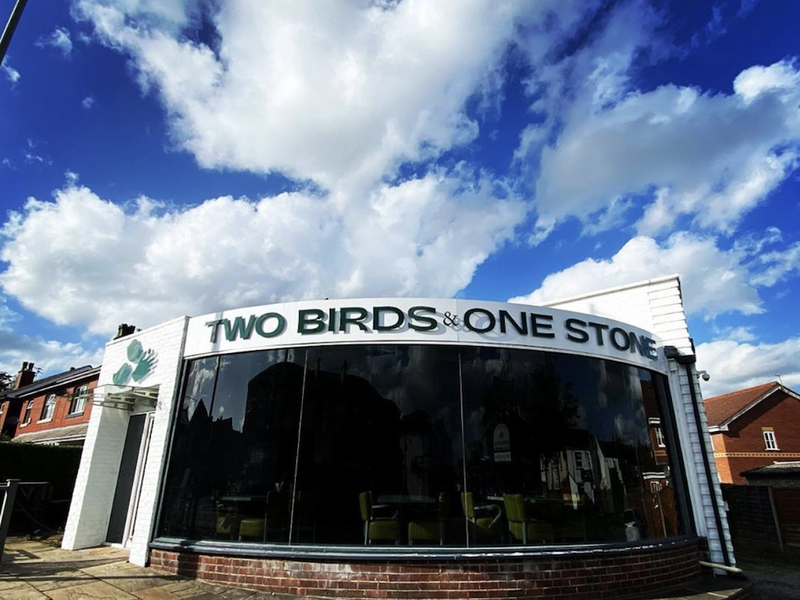 What: Two Birds & One Stone

This family-run brunch bar and cafe is one of a flutter of fledglings helping to build a dynamic dining scene in the Whitefield and Prestwich area. There’s a focus on organic and locally sourced produce and a substantial selection for kids and babies. The menu is split into breakfast bowls, all day brunches and sharing boards with classics and touch of Middle Eastern influence in the form of dishes like shakshuka and mezze. But it’s not just a cafe, you can pop in for a couple of cocktails too. Ironically, they’re on Instagram but er, not Twitter. 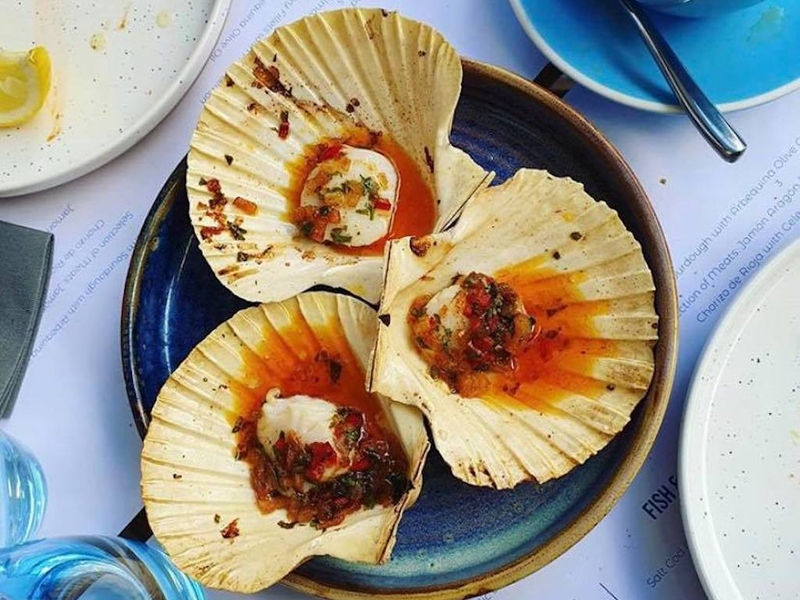 Prestwich residents must be buzzing at the moment with all the exciting new openings in the area. Another place we’ve heard good things about is this new tapas spot at the Longfield Centre. All the usual suspects are there, from patron peppers to patatas bravas but there are some wildcards too like roasted cauli with romesco sauce & almonds and BBQ queenie scallops with chimichurri. This buzzy, modern restaurant is already very busy so make sure you book a table if you want to check it out.

Read next: And the winner is…. Manchester Food & Drink Awards 2020

BYOB's yer uncle: bring your own booze restaurants in Manchester
What you say
Read Next
● / Mediterranean