Jonny Heyes and his wife Charlotte are key players in Manchester's restaurant, bar and pub scene and the city would arguably have been quite a different place without them.

They are behind a number of venues including Northern Quarter stalwart Common Bar, beer-enthusiasts' drinking hole Port Street Beer House, as well as ‘the pub that Manchester built,’ The Pilcrow. They are also behind Manchester’s hugely successful Indy Man Beer Con and Summer Beer Thing (which has been postponed until 11th -13th June 2021).

I’m incredibly proud of what we have done in our own small way to contribute to what is now a burgeoning scene of breweries, bars and events across the city and the region

Jonny’s projects and events always manage to be serious but with a playful edge, as well as incorporating ethical working practices. How has he managed to keep his energy and enthusiasm up, spinning so many plates in such a notoriously difficult industry, for so long?

“I guess the founding principles of the businesses have always been about spotting an opportunity to do something a bit different,” he says. “We pride ourselves as being a bit of a disruptive force in the industry, if only on a small scale.

“We’ve never really played the ‘game' and I guess we’ve always been the perennial outsiders, which is maybe why we have maintained our appeal over a good period of time with a certain group of customers - even though we may never have achieved the financial success of some of our peers.

“Independence has always been at the core of what we’ve done, we never really set out to make loads of money, we just wanted to make a living doing something I enjoyed and I feel privileged that our customers and this industry has allowed me to do that - so thanks! It’s been a real up and down journey for us, we’ve made some great decision and some pretty crap ones which have pushed us close to the edge a few times.”

But 2020 has been a kick in the teeth for everyone. How has he coped? “In a funny way I feel like the rough times we’ve had over the years have prepared us for COVID, I feel like I knew quite quickly what needed to be done. We’re long way off saying we got through it but I feel confident that we can, it ain’t over yet by a long way.”

We’ll come back to what kept Jonny busy over the enforced lockdown period, but let’s go back to the beginning when he launched Common on Edge Street at the end of 2004. The venue soon became the favourite haunt of many thanks to their top beer selection, rotating art exhibitions, poetry nights, musical performances and arts workshops.

“Common came about as a reaction against all the brassy high street bars which were in vogue at the time,” explains Jonny. “We didn’t really think they represented us as young people we wanted to create something more social and stripped back.

“The NQ was the obvious choice as it was cheap (at the time) and really well connected to the music and arts scene which we were in to. We were lucky to be in the right place at the right time really.”

Jonny then opened Port Street Beer House (PSBH) on the other side of the Northern Quarter in 2011. Given the amount of top quality craft beer producers and venues that can be found in Manchester now, it’s hard to imagine how ground breaking it was at the time.

“There was clearly an emerging new craft beer scene which wasn’t really being showcased in Manchester and it was something that we were really excited about, so we jumped in to Port Street with both feet,” Jonny tells us. “I’m incredibly proud of what we have done in our own small way to contribute to what is now a burgeoning scene of breweries, bars and events across the city and the region. I think it speak volumes that you can’t go in to a pub or restaurant now without being offered a craft beer selection of some sort and to have been part of that story has been a real privilege.”

Taking it one step further, Jonny launched Indy Man Beer Con in the same year, which The Financial Times described as having 'rewritten the rules on what a British beer festival looks like.' The annual four-day festival (which would have celebrated its ninth year in 2020) is no doubt the event of the year for craft beer lovers and brewers with more than 80 taps serving up local, national and international beers on both cask and keg.

“Indy Man Beer Con was something that led on from PSBH and is probably the single most disruptive / influential thing we’ve done within the craft beer industry” reckons Jonny. “Before we started there wasn’t a single beer festival which highlighted the new array of craft brewers in the UK, as none of their beer qualified to be at CAMRA affiliated events (they only allowed real ale at their events, new craft beer generally isn’t real ale).

“The devotion that our customers and brewers have to IMBC and the happiness it seems to bring to people gives me an amazing kick and is one of the things I’m most proud of. We also have a little sister event called Summer Beer Thing which is an offshoot of IMBC.”

Not all Jonny’s venues are in central Manchester; he is also behind The Beagle in Chorton. “The Beagle again is a great source of pride, for many years it was our problem child, we didn’t get the offer right to start with and had to make lots of changes to the offering, but in recent years, thanks to our amazing team, it’s one our best performing sites, particularly since lockdown with so many people working from home.” 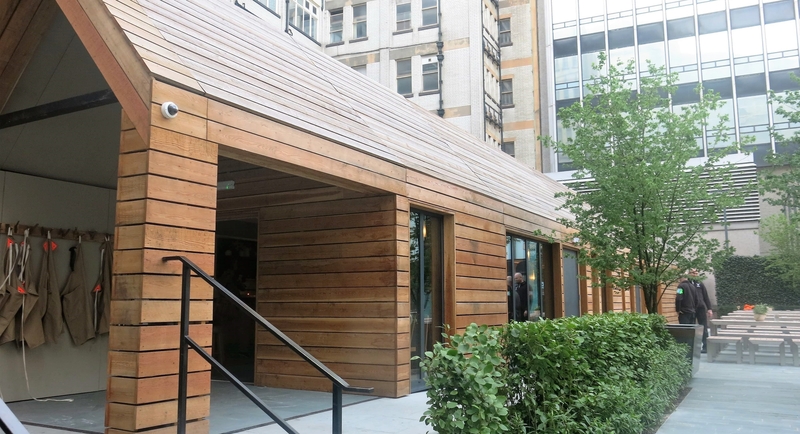 In 2016, Jonny partnered up with Cloudwater Brewery’s Paul Hughes and others to create The Pilcrow (read more here) a handsomely crafted wooden lodge, built by volunteers as part of the Co-operative’s £800m work-in-progress reinvention of its ‘quarter.’ “It’s been really fun project creating a nice little neighbourhood pub down at NOMA,” he says.

But let’s return to Common, where it all started back in 2004.

Common was an important part of the rise of Manchester’s Northern Quarter and has remained a really popular venue. “Obviously we had a fairly major overhaul in 2015 which some of our old regulars have never fully forgiven us for,” laughs Jonny, “but we thought it was important that Common didn’t just become a dinosaur harking back to bygone days. We needed to appeal to the next bunch of young people looking for a place to hang out and I think that willingness to rip it up and start again has stood us in good stead.”

The kitchen has also has an overhaul and is now home to Jonny’s latest concept Nell’s Pizza (the name is derived from the initials of his kids' names, Nell, Edith and Lenny.) Thanks to Jonny’s typically detailed research, giant 22-inch New York inspired pizza pies are now available in Manchester.

“Nell’s is really a passion project,” explains Jonny. “Pizza is something that I’ve been talking about doing for a long time but we never really had the right opportunity to do it. I toyed with lots of different styles and was inspired a lot by the pizza scene in the US, but finally settled on a big by-the-slice option.”

So he’s eaten a lot of pizza during lockdown then?

“It was a joy really to have the time and space to really dig deep in to the development of the project, hours spent perfecting the dough, baking off pizza and eating a lot of (mainly cheese) pizza. I’m really proud of what we’ve created, I think it’s delicious and we are challenging for best pizza in the city, no joke.”

Nell’s also formed part of Jonny’s plan to get out of this COVID mess. “Very early on in lockdown I started referring to pizza as being our lifeboat plan,” he tells us. “I felt like this could be a way for us to build the business back up, it was something that I could do myself too.

“I’m now back in the kitchen after a ten-year hiatus,” says Jonny. “I’m prepping the dough, making pizza, retraining the kitchen team and washing the dishes. I knew that getting out of this was going to take a special effort and I didn’t want to get to the end of it and feel like I wished I’d worked harder. All the time I’m working 70 hours a week Charlotte has been at home home-schooling our kids whilst picking up emails and fitting bits of work in between. She has been the real hero behind allowing me to do what’s necessary to get the business back on track.”

Jonny invited me to come down to Nell’s and try the pizza. I was slightly apprehensive in the face of such a gigantic disk of carb-loading stodginess, but it wasn’t what I expected. The crust was light and delicious with a definite crunch. Quite different from the slightly soggy Neapolitan styles you can get on the other side of town. The dough is slow-fermented over 36 hours to allow for a perfect combination of strength for folding and lightness for enjoyment, so I didn’t need to lie down for the rest of the afternoon.

“I’m really glad you liked it,” says Jonny, looking a little relieved. “We say that it’s NYC inspired as I was very much influenced by a trip to Brooklyn listing the best pizza spots, such as Lucali, Di Fara and Scarr’s Pizza in Manhattan. However we’re not really trying to replicate the exact same dough recipe, we’ve gone our own way.

“We’re using seasonal British ingredients where possible such as British flour from Shipton Mill and we’re using lots of cheese from the North West thanks to the crafty Cheese Man as well as amazing meat from Littlewoods butchers.”

Part of the drive behind Nell’s was to create a food business which was more gentle on the environment, using less power, creating less waste, using less meat, buying locally grown responsibly sourced meat and vegetables from small local suppliers.

What’s the future for Nell’s Pizza? Jonny had been developing the concept for over a year with the intention of creating a new business at a new site in the city, but the onset of COVID-19 threw a fairly major spanner in the works. Instead, he used his time to perfect the recipe and made it available at Common. “I’m really proud of what we’re producing and I really believe that it will get better and better,” he says confidently.

Now the local Council has invested in outdoor seating, Edge Street and the rest of the Northern Quarter has become a fantastic and cosmopolitan place to sit and soak up a sunny afternoon. Common even has an app allowing you to choose and order from your phone to make social distancing no problem at all.

As for the future standalone Nell’s Pizza venue…watch this space.