“Where there is muck there is brass,” is a famous farmers’ saying, and they aren’t talking about buried treasure.

But these days, the money in farming is just as likely to come from being on telly than actual crop yields. Take Jeremy Clarkson’s Big Fat Escape To The Farm (I approximate), which, thanks to its national exposure, sees people queuing for hours to get into the shop. Now that’s making money out of manure, or as polite company prefers to call it, diversifying one's income stream.

When The Lambing Shed in Knutsford recently won the Farm Shop and Cafe of the Year in the Farm Retail Awards, it seemed like a must-visit. Farm shops have always been something of a guilty pleasure for me. Despite knowing they aren't a strictly accurate depiction of the process of food production in this country, the abundant heaps of produce tumbling from wicker baskets (always wicker) gives me a serious case of the Marriette Larkins. Pass me a gingham bustier and tie a flower in my hair, I’m home.

True to form, The Lambing Shed has everything the farm fancier could want – a cheese counter that you could bathe in, like a fermenting Cleopatra. A symphony of rose and blush and damson on the meat counter. Chutneys. Pies. Locally distilled Gins. Biscuits so fancy the Queen would save them specially for visitors. I want it all.

And so do plenty of other people. A veritable peloton of cyclists pause here to refuel on the extensive breakfast menu and, this being the Cheshire countryside, there is often a Bentley or Porsche in the car park.

Despite being as much of a sucker for the country dream as the next urban wage slave, something I really like about The Lambing Shed is that, while it ticks a lot of the National Trust boxes, you can also see the real farm between the cracks. Yes, the interior is one of lovely rustic dressers and bouquets of flowers tied with twine, but look up and you can see the corrugated plastic that farm buildings all through the country are roofed with.

The reason for this is that the shop and cafe are housed in what used to be the actual lambing shed at Moseley Hall Farm. In fact, there is still an outbuilding next door which is currently home to a group of fleecy mamas and their bouncy offspring, which is simultaneously adorable and a bit uncomfortable for someone about to eat one of their brethren.

The Mitchell family has been farming this land for decades, no Jeremy-come-latelys here. This is a genuine working farm and not just a tourist attraction, despite the pleasantly-styled surroundings. Meat is naturally the star, butchering their own meat and meat from farms around. Everything they sell is as local and seasonal as possible.

Head butcher Richard Silverman was previously at The Butcher’s Quarter and one of the Lambing Shed’s trainee butchers, Justine, set up Meat Co (a meat delivery box service) over lockdown. Justine posted a video of herself making sausages on Instagram and her DMs were full of job offers (all legit) but The Lambing Shed won out, presumably tempting her with its ethos and string of awards.

According to Jenna Scott, The Lambing Shed’s marketing manager, “The quality of our food is more like a restaurant than a cafe.” While there is quite a bit to unpack in that statement (plenty of rubbish restaurants, plenty of great cafes) I would agree that it is of excellent quality and the menu is designed much more like a restaurant than a café. The lunchtime crowd are gorging on pan-roasted hake and spiced lentil dahl, the usual sandwiches nowhere to be seen. I later figured out that if you want something a bit more lunchable, you can buy panini and sandwiches on the deli counter, which is also groaning with sausage rolls, pork pies and the like. No one goes hungry here, not even vegetarians.

I am not a vegetarian though, so I had to try the lamb. Specifically, the lamb shank with red currant jus, braised red cabbage and sweet potato mash (£15). The shank was everything you’d expect it to be, tender strips falling off the bone, coddled in melting fat. Wonderful. The sweet potato mash was a good accompaniment but the redcurrant jus was just a drop too sweet for my taste. That lamb though. I still think about it now, in a kind of weird inversion of a Jodie Foster moment.

My lovely mum had the beef burger (£14.50), which is not her usual wheelhouse. In fact, she exclaimed “it’s got cheese in it!” which indicates that she may have never eaten a burger before in her life. Still, she let me try a bite (thanks mum) which was dense with quality meat. The fries were good too.

Normal farm shop service was resumed with the cakes - a raspberry and white chocolate brownie (£2.95) was fudgy and dense, while I really enjoyed the spiced apple cake (£2.95) with a cup of tea, all served on classic blue-and-white willow pattern china, of course. This was more like something from Ma Larkin's table. It really is a slice of pastoral bliss, with scrubbed pine tables and toy tractors outside for the little ones to play on, you can forget all the bad things in the world for a second or two.

The further removed we become from the origins of our food, the more farms occupy an odd place in our collective psyches. The classic British landscape of a patchwork of fields, farms and villages linked by hedgerows and lanes still lives on in the imagination as a kind of pastoral heaven even if the closest many of us might get to it is an evening in with Clarkson on Amazon Prime. Capitalism being capitalism, there is always a way to buy a piece of heaven. While most of us might not want to put in the hard yards on an actual farm, eating the dream will do nicely. Very nicely indeed. 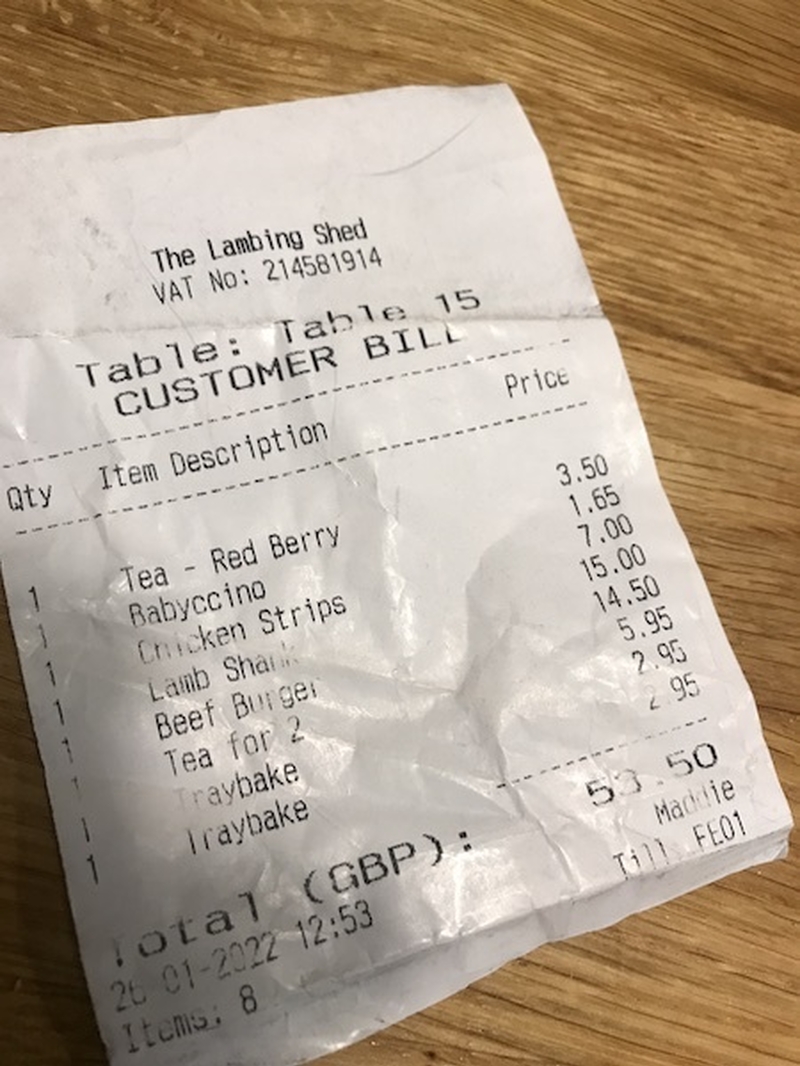 Fold, the bistro and bottle shop serving squid bolognese in Marple Bridge
What you say
Read Next
● / Indian