Brace yourselves. This month's new openings roundup is MASSIVE. And for the first time this year, you can actually sit inside at most of them, we say, as our eyes dart around the office looking for the nearest wood to touch. Fingers crossed they get to stay that way.

Here’s to full tums, comfy bums, and no more sitting outside getting drenched whilst frantically trying to stab away at the last chip between mouthfuls of rain-diluted pint.

Here is our round-up of what's opening on Manchester's bar and restaurant scene in May and beyond. 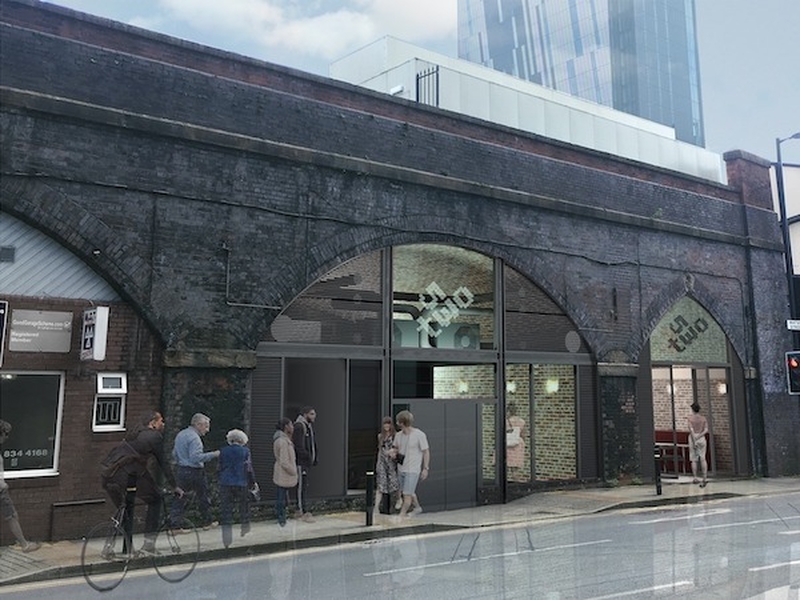 It’s been a long, hard slog to bring many exciting plans to fruition during the pandemic and this is especially true of 53Two, launching its long-awaited theatre and arts bar at the end of the month. Spanning two Grade II listed railway arches next to Three Little Words, it will be home to an accessible bar and 150 seat theatre that will also act as a community space.

Similar to its previous home at the old Bauer Miller showrooms, visitors can expect breezy coffee shop vibes by day with entertainment and pints by night at the bar. The beer selection will be local, with the likes of Brightside Brewery on the taps. Pies come courtesy of Bolton pasty champs H.M. Pasties (one that made our Manchester pie chart a few months ago.

As well as being a nice place to chew your mate’s ear off, the bar will operate as a member’s club for artists post-11pm, complete with a members-only entrance. The theatre, when it opens later in the year, will be the first fully accessible one in the city centre. In the meantime, it will be used as a much-needed studio and film screening space. 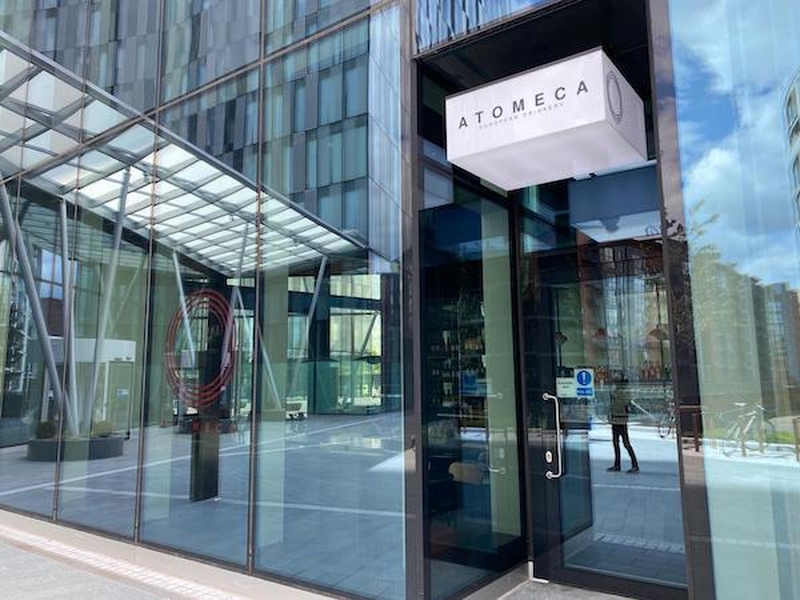 You wait ages for a bar from Manchester's Schofield brothers and then two come along at once. Hot on the heels of Schofield's Bar, Atomeca is the second hometown bar from the Manchester pair and will open at the glittering, skyscraper-ed Deansgate Square on 21 May. Calling itself a "European drinkery" (no comment), the bar has been designed by award-winning architects Lister+Lister and will offer a range of European style drinks, beers, cocktails and wine in association with wine expert James Brandwood. A cake-heavy cafe menu will operate during the day with "tapas style plates" in the evening. We'll be in for a nosey very soon. Deansgate Square is more and more worth a visit. 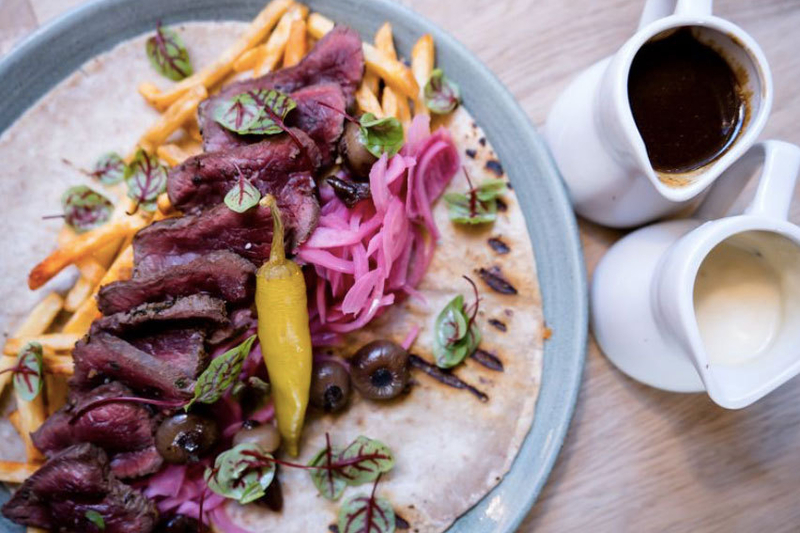 The Northern Quarter gourmet kebab restaurant is expanding and will be bringing its "kebabs worth sitting down for" to Bramhall. Discerning Bramhallians will get to enjoy Bab's now-famous freshly made flatbreads, house marinades and creative ways with protein - about as far from a sobering, post-pub carb-fest as you can get.

Trademark babs include classic flat iron steak with whipped blue cheese and truffle, chip shop halloumi with wasabi peas or harissa octopus with pickled samphire. Sides include the famous Greek-style fries with tzatziki, chilli sauce, feta and olives. Grab a jug of your Mediterranean-inspired cocktail of choice and you’ll forget all about your local rotating meat slab. 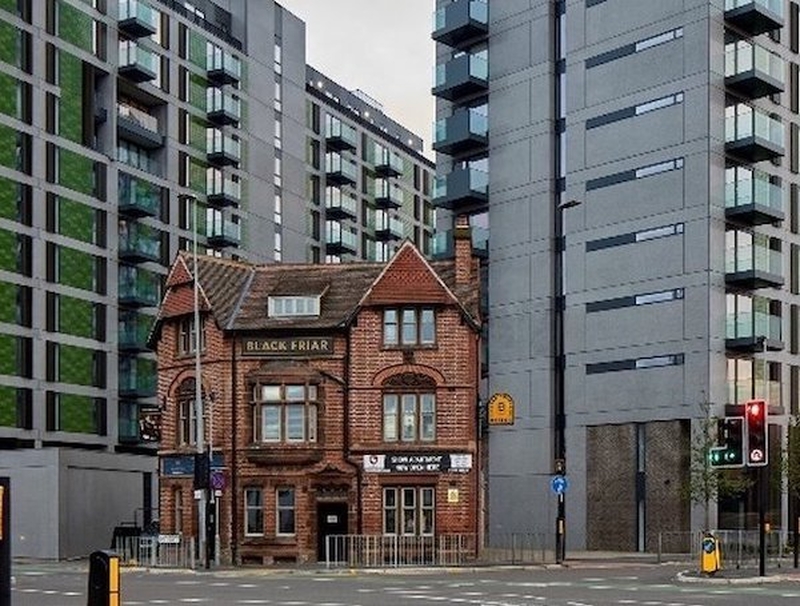 What: The Black Friar

This long-suffering and criminally neglected Salford institution was at the centre of a lot of fanfare in 2019 when Manchester House's Aidan Byrne announced he would be reopening The Black Friar. That, er, never happened as Byrne decided to concentrate on his Church Green pub in Lymm. Nonetheless, the pub's been given a cash injection of over a million quid by developers Salboy (and others) and another chef - Neil Burke, who used to be regional manager of the Jamie Oliver group - has taken the helm. Details are thin on the ground for the menu but we reckon there's plenty of room for more really excellent gastropubs in Manchester so we have high hopes for this one. 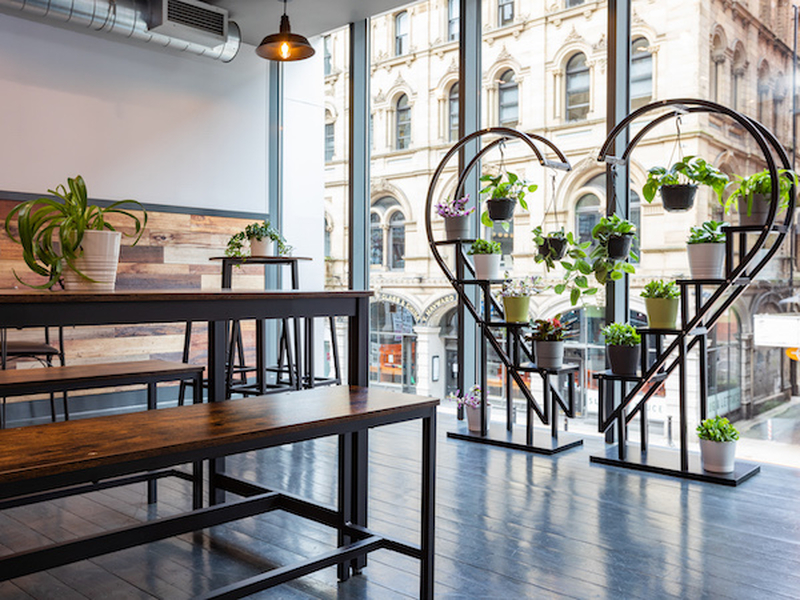 Manchester’s latest CBD Coffee shop, Bloom is bringing some greenery to Deansgate. With the option to add a drop of calming CBD to your morning cuppa, the cafe aims to improve the wellbeing of Manchester residents. Having softly launched during lockdown, the cafe is ready to welcome guests indoors now. Manchester Loaf provides the all-important cakey accompaniments in case you get the munchies. 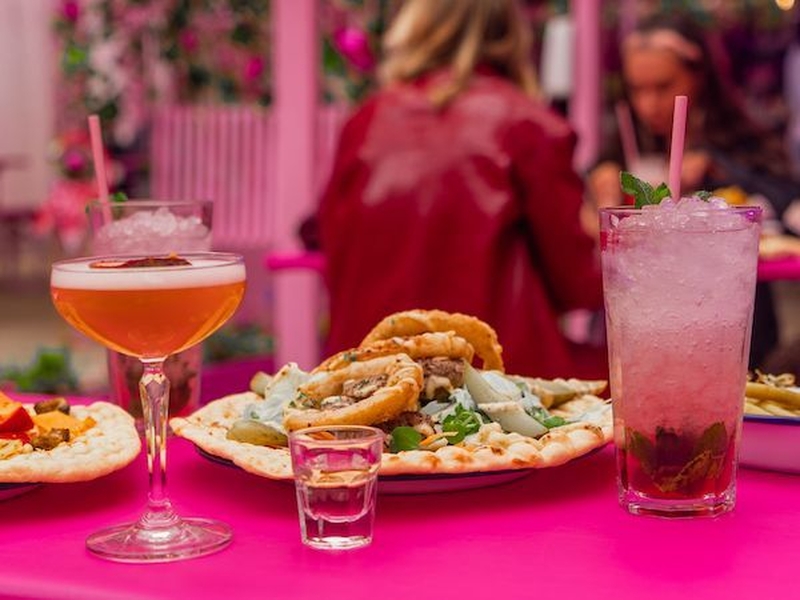 Not to be confused with 202 Kitchen (actually, it's very confusing), Boujeee is pink. Everything is pink. And when it’s not pink it’s nearly pink, sort of purple although there is green too - in the form of mock foliage attached to pink flowers. Occupying the old (and massive) Vanitas nightclub site on Bridge Street, it’s owned by Lystra Adams - of The Real Housewives of Cheshire fame - and it’s a place that will appeal to fans of the show.

A pink menu, with little high heeled shoes to signify gluten-free options, offers diners a sushi roll heavy selection, as well as meaty small plates including popcorn chicken, steak sliders, and spiced lamb chops. There’s Prosecco on tap and if you go there enough, you might get on the telly. It’s pink marmite but as some people walk past and grumble, others inside will be having the time of their lives taking copious selfies for the 'gram. 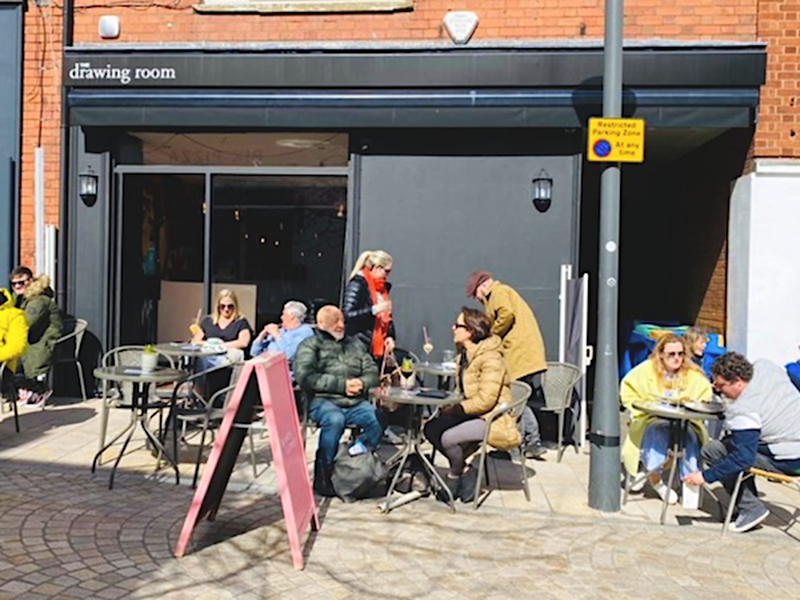 What: The Drawing Room

A new addition to The Drawing Room family of bars has popped up at the former site of The Cellar in Altrincham. Originally set for a Withington location but with licensing issues throwing a spanner in the works, it's found a home in Altrincham’s Market Quarter and will be walk-ins only. Less of an emphasis on cocktails and more of an intimate pints spot, greasy burgers to soak it all up come via Big Grillie Style. 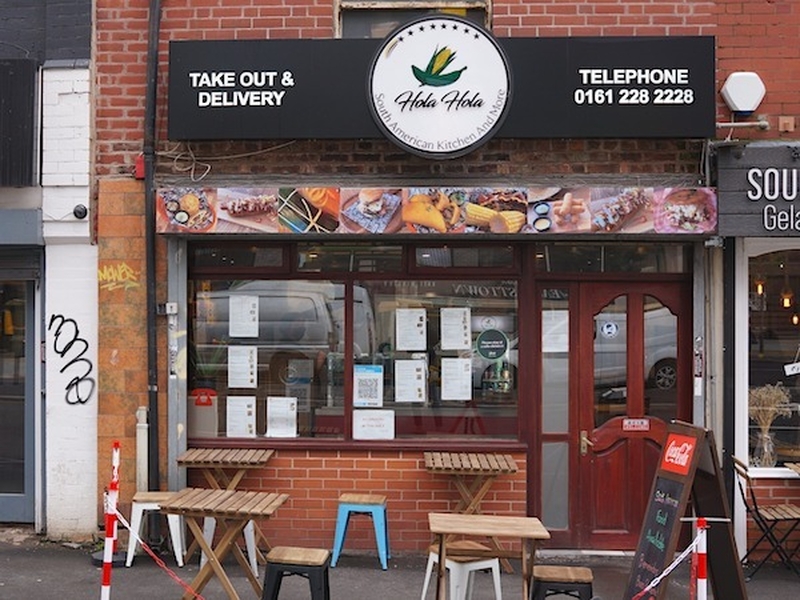 Fun fact: the family behind Blue Eyed Panda and Chop Chop in Ancoats are from Venezuela and they’ve been itching to go back to their culinary roots for a while. That itch has now been scratched with the opening of Hola Hola which specialises in Latino snacks. Open for takeaway and outdoor eating, the menu is a genuine labour of love with highlights including freshly made empanadas, pastelitos and a revolving selection of specials.

The Empanadas and pastelitos come in both meaty and vegetarian options but for something different try the buñuelos. A Venezuelan tradition, Hola Hola's version of the fried dough balls comes with salty cassava, melted cheese, and sugar cane syrup. There are also imported malt drinks and sweets for extra authenticity. 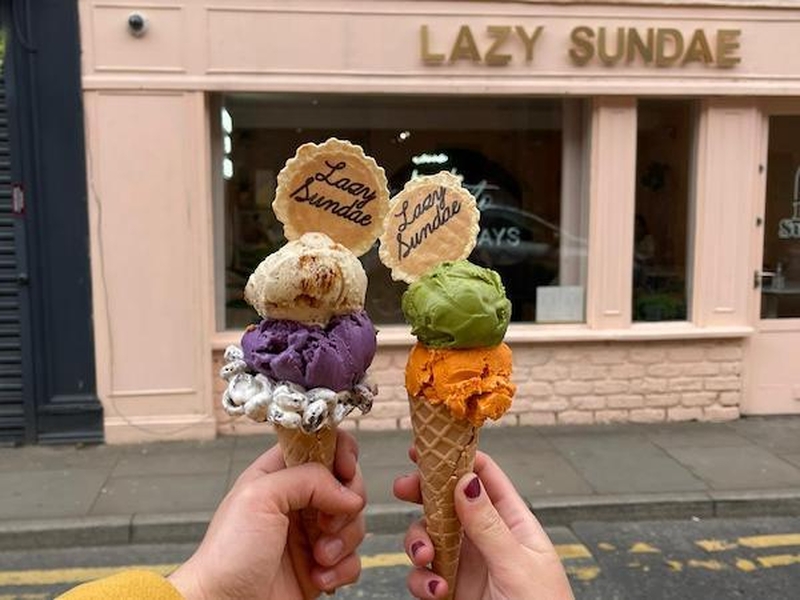 If you like pastel colours and you’re bored of classic ice-cream flavours, you are in for a treat at Lazy Sundae. Serving a sweet-tooth trifecta of soufflé pancakes, premium bubble tea and not your run-of-the-mill ice cream flavours (think milk tea, cereal milk and taro), you can also expect pineapple bao ice cream sandwiches and strawberry matcha oat lattes. Vegan flavours and dairy-free options are also available and the whole setup is an Instagrammable dreamscape. 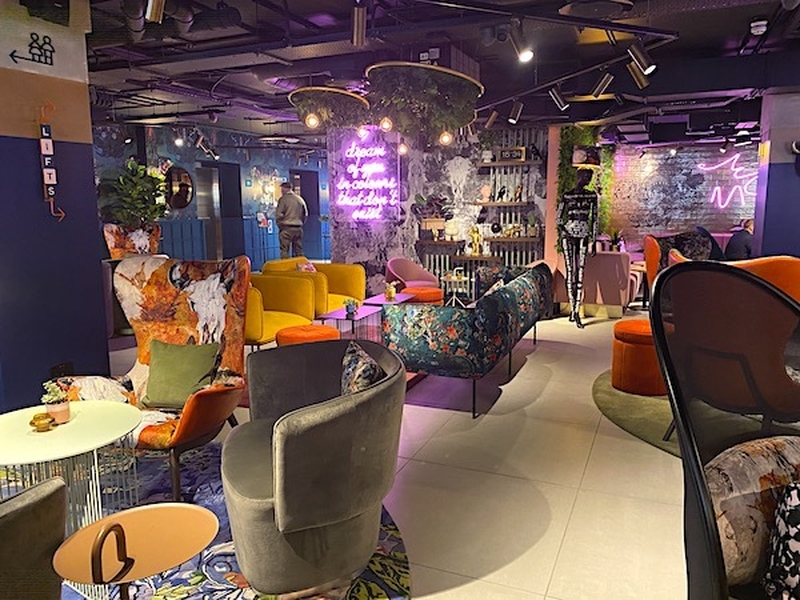 Taking up the ground floor of the newly opened, design-led Qbic hotel in the middle of Deansgate sits Motley. A bar and restaurant with a people-watching-friendly street-side terrace and private events rooms. Think neon quotes on the walls, loud Manc-inspired decor equally suited to catching up with a group of mates or squirrelling yourself away in one of the hot-desking booths. There are also rooms for private karaoke if that’s your bag.

With its own Motley lager and locals Shindigger, Seven Brothers and Runaway providing the rest, the menu follows a pragmatic route of classics with quirky touches like a cornflake encrusted chicken burger. The fish tacos went down well on a recent visit, as did the charred broccoli and asparagus with sweet miso and hazelnuts. Keep an eye out for the mannequins. When: Open / later this summer

Sleek coffee shop and cocktail bar Mule has already opened one location during lockdown on Blossom Street in Ancoats and is now brewing up another as part of hip new neighbourhood Deansgate Square. With Scandi minimalist interiors and, it says here, "transportive desert-bar environs" it’s probably no coincidence that its name rhymes with cool.

That said, as the world opens up we’ll all be looking to hot-desk again from a comfy but stylish chair and a passive-aggressive battle for the nearest plug socket. The barista-standard coffees will be free-flowing and there’s a fancy breakfast and brunch menu to keep you occupied between 8 am and 4 pm, spearheaded by a substantial-looking chorizo hash. 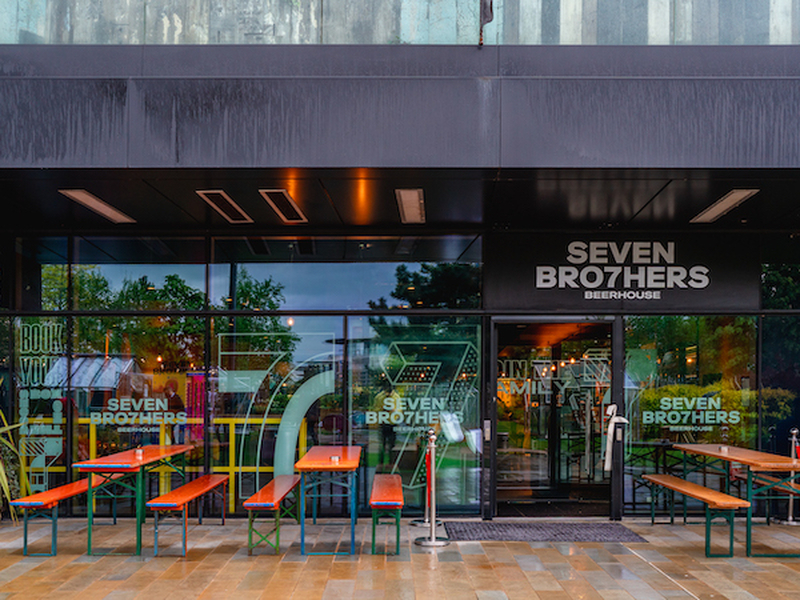 The latest Seven Bro7hers beer house is now open in Salford Media City with the Mayor of Salford himself cutting the ribbon. Tucked between Pret and The Botanist, it’s currently doing walk-ins for pints and beer snacks. Said beer snacks are plentiful, including burgers (try the jerk), fish bites (surprisingly good with an IPA) and salt and pepper chips.

There are seven-plus beers on tap, including the Easy IPA and the Sling It Out Stout - and loads in the fridge too, including a choice selection from other breweries near and far. There’s also an option to book separate spaces at Box on the Docks if you need a bit of private pint time. If you’re confused by the "established in 2004" tagline (guilty) it’s because Seven 54 Café’s previous incarnation was The Deli. After a big old refit during the pandemic bringing new interiors to match the brasserie-style menu, Seven 54 Café is now complete and ready for walk-ins. It’s a comfortable, dog-friendly place to sit and enjoy dishes like chicken schnitzel and grilled lamb rump with aubergine coconut cream curry. 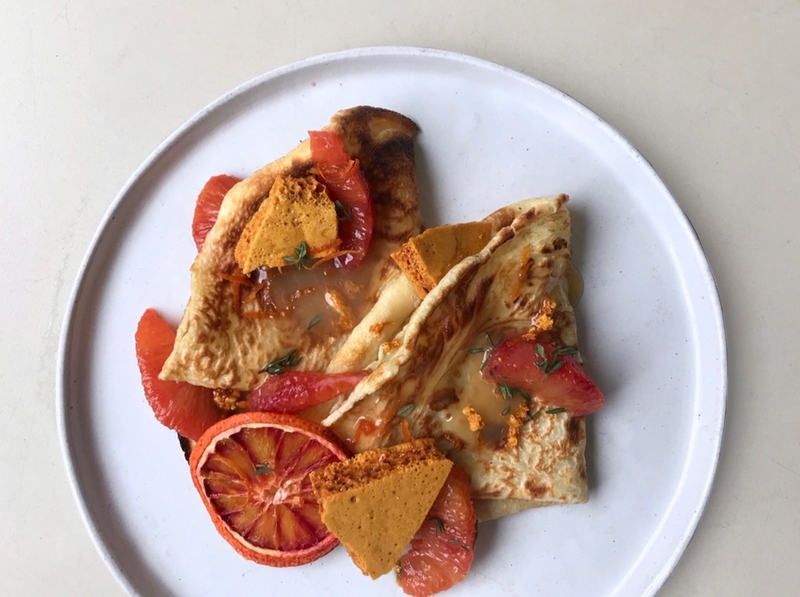 Levenshulme sourdough pioneer Trove is adding a third location to its roster this summer. Taking up a spot at the latest Bruntwood Works venture on the corner of Fountain Street and Marble Street - home to the infamous Brewdog Beer Hotel, the opening will coincide with the 10th anniversary of the opening of its original Levenshulme bakery. The new spot will get a brand new brunch menu, with coffee from Allpress Espresso and freshly-squeezed juices from One Zero Zero. From the younger generation of the Namaste Nepal dynasty, Wanago takes inspo from the family biz, partners with Zumu and makes it Instagrammable. The restaurant sits among cool company on Burton Road and describes itself as a "Pan Asian street food eatery and bar". It's already doing a roaring trade after opening for outdoor dining during lockdown.

Inspired by the street food of East Asia, the menu features Thai curries, ramen bowls and phad Thai in various guises along with shareable small plates like butterfly prawns, duck gyoza and Korean chicken wings. Indoor and outdoor dining is available as of 17 May.