Brewdog is a clever operator. It’s marketing and boosterism is second to none in the world of beer production and bar operation. It is one of those cunning Digital Age companies that exude an air of the homespun and the small-scale. This reputation is aided by ordinary folk owning 25% of the business through a crowd-funding scheme.

This states loud and clear that clever operators feel all the economic and social life we have lost in the city centres will return.

Brewdog remains charmingly fleet of foot despite its scale, rushing out a ‘Barnard Castle Eye Test IPA’ after Dominic Cummings’ lockdown breakout. The ale was marketed as a 'shortsighted beer for tall stories.'

Manchester is going to find itself the focus of more Brewdog love in January 2021. As we mentioned briefly in last week's bitesize food and drink news, we’re going to get a big new bar but also a restaurant to complement the existing outlets on Peter Street and at the University.

Here are more details. The unit on Fountain Street in the city centre will host a 3,512 sq ft bar and restaurant 'featuring a large outdoor terrace with 28 taps of fresh draft beer.’

More startling news is the arrival of a Brewdog Hotel on the floors above the bar. This 'Beer Hotel' could happen by summer next year. It would have 18 bedrooms. There are existing Brewdog hotels in Columbus, Ohio, and in Aberdeen but this would be the first in England.

We’re told as part of the deal when staying over, there would be:

A sleepover at the hotel would come with:

● The option to order BrewDog food delivered to the room

● A record player, selection of vinyl and guitar in every room

● All rooms dog friendly with dog beds and treats for canines

It all sounds tremendous fun. The location is interesting too. This is an odd area of the city centre betwixt and between the busier nightlife zones.

Of course, Beermoth is close by and there’s some action round the corner at the top end of King Street but The Shakespeare pub next door to the proposed Brewdog is a shocker at present, rundown and gloomy, a lovely building that needs lots of investment.

The new opening is an alliance.

Manchester-based property developer Bruntwood Works is the country’s finest restorer of 60s and 70s commercial properties by a mile. Instead of tearing the latter down, the company builds on the innate qualities of these tough, often unpopular, structures and breathes new life into them. Given the industrial strength of much of Brewdog’s beer, the fact they are working with Bruntwood Works seems apt.

The Lowry building, now renamed The Bloc, is one of the toughest of Manchester’s concrete structures dating from 1973 by Robert Swift & Partners. It’s just about the most concrete building we have, a festival of precast brown concrete (some people think it pale pink – really?) that includes a tower on the unintentionally ironic Marble Street and a lower element on Fountain Street opposite Primark. It’s the lower element that will host Brewdog.

The positivity implicit within it is encouraging. It states loud and clear that clever operators feel the economic and social life we have lost in the city centres to this vile virus and the government’s reaction to it will return.

It’s a concrete (you might say) rejection of the worriers and the naysayers. 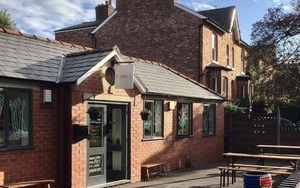 Allie Crewe: 'I know what it is like to suffer and to be silenced'
Web Design Manchester MadeByShape