Well, this was quite the list to compile. Sale is currently off the charts when it comes to eating and drinking and with even more new places due to open soon, the choice can get overwhelming.

According to The Guardian, Sale has seen a 43% net increase in the number of restaurants since the pandemic - that's the highest of all areas surveyed. For contrast, hipster Dalston in London had just 20%. And it's not just new openings that count. Sale has also been nominated for an MFDF Foodie Neighbourhood of the Year award and we hear it's in with a very good shot.

But enough of the stats and noms. Yes there has been a boom in Sale and we've included the newest places to eat and drink that make this Trafford's in-demand spot, but you'll find some old favourites here too.

Here’s our list of the very best places to eat and drink in and around Sale.

Originally from Hong Kong, experienced pastry chef Jeffry Koo and his sister-in-law Venus Tay decided to open their own patisserie when they moved to Sale - and made a splash when they appeared on Bake Off: The Professionals not long afterwards. First and foremost this bijou place sells impressive pastries and knockout special occasion cakes. However, they are also a handy source for specialist baking supplies and ingredients for shabu shabu. They can also introduce you to other Hong Konger businesses, making a scroll through the website a must.

Tucked down Hope Road, a two-minute walk from the tram stop, Amphora specialises in coffee and cakes - and does some great breakfasts as well. There is a classic full English of course but we recommend giving the baked eggs in house sauce or yoghurt eggs a go. Here for the sweet stuff? The cheesecake is definitely worth a look.

Ashby's is the brainchild of Ashley and Abby. While the shop is very definitely a greengrocers bursting with organic produce, they also have great bread from Holy Grain and a well-edited selection of provisions, condiments and sauces - basically all you need to make those healthy fruit and veggies pop. Lunchtimes see them do a brisk trade in imaginative salads such as charred broccoli with sesame and chilli or roasted cauliflower with a tahini dressing.

As long as it's got an egg on it, Blanchflower can make it into a delicious brunch dish (the pastrami benny is a current fave). Almost everything is made in-house or sourced locally at this new Sale outpost of the Altrincham favourite. Open daily, but a sunny Sunday morning is the obvious time to visit.

Cork of the North

This independent, family-owned wine merchant business started life in Heaton Moor but soon decided to reach out across the Mersey to Sale. In addition to shelves of interesting wines (including an orange beauty from Bulgaria and some intriguing Croatian wines) there is a small but perfectly formed selection of beers and spirits. Best of all, you can stop in for a drink at the bar and have a chat (read: geek out) with the knowledgeable staff about your next purchase.

Does one expect a rustic wooden Canadian shack serving authentic poutine on Washway Road? It doesn't matter, you've got one. As well as the cheesy curd-fries-gravy combo that is the Canadian national dish, there are burgers, steaks, wings and milkshakes that are as hearty and chunky as the decor to help you brave the harsh Sale winters, eh? 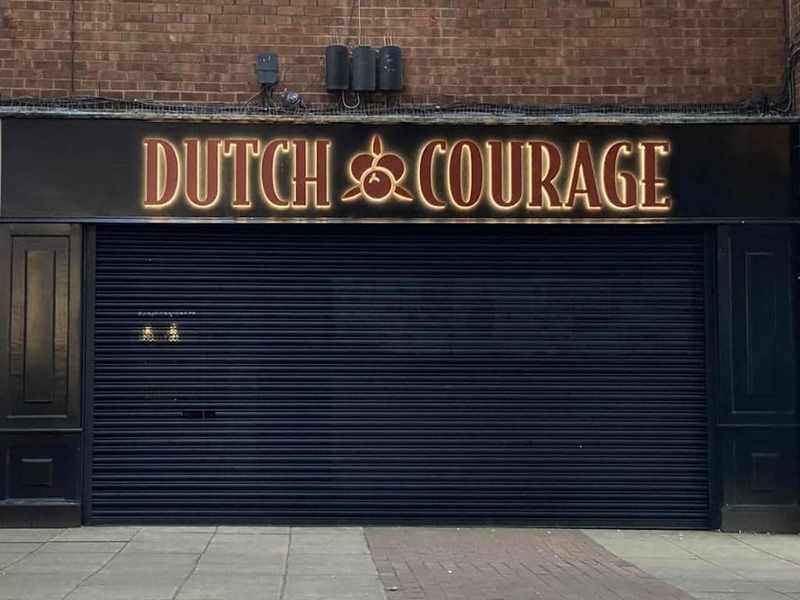 Apparently the term "Dutch courage" comes from the bravery-inducing effects of jenever, or Dutch gin. Although you won't need any false bravado to head into this cocktail spot. You can try modern classics such as a French martini or tour the world with destination cocktails such as Pomona's Arbour (creme de peche, blood orange, prosecco and bitter lemon).

After an earlier iteration as Groceries and Beer, which became an instant hit, the General Stores empire took on a bigger unit round the corner and Sale Foodhall was born. Similar to its Stretford cousin there are three kitchens that rotate street food offerings, meaning you could encounter pizza, Malaysian noodles and boozy ice cream one week, burgers and Swedish vegan junk food the next. There is also a shop that concentrates on wine, beers and premium snacks.

Grapefruit has become such a fixture on the Sale scene, it's hard to believe it has only been open for three years. It came into its own during lockdown when a coffee and a cinnamon bun served from the hatch was the ultimate daily walk treat. Coffees are sourced from around the world and home-baked treats such as raspberry lamingtons, blueberry friands and fig galettes to go with them.

Didsbury's, nay Manchester's, premium veggie spot took 30 years to get a second site and when it did the team plumped for Sale. A more relaxed, sharing plates-style restaurant than its big sister, it nevertheless has become a go-to for occasion dinners and Sunday lunch, with dishes such as barbecued hispi with pomegranate, harissa and almond or tempura cauliflower with gochujang and furikake. The roof terrace is opening soon and is sure to be a draw on sunny afternoons with a jug of rose sangria (or two). 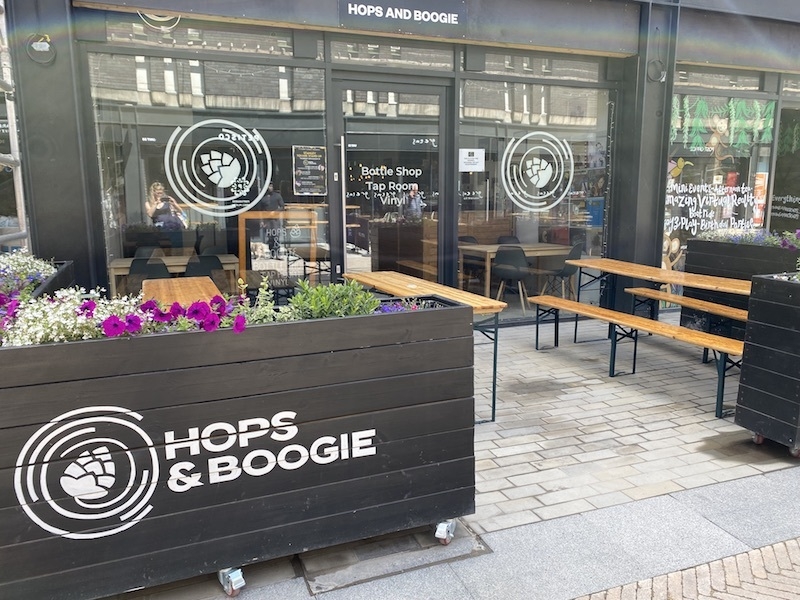 Music and alcohol is a combo that stretches back to the dawn of time, and if it ain't broke then please, don't try to fix it. This independent bottle shop, taproom and record store serves a range of craft beers from the likes of Brew York and Wander Beyond brewing; hosts meet the brewer days, live music and comedy and spins nothin' but WuTang all Wednesday. 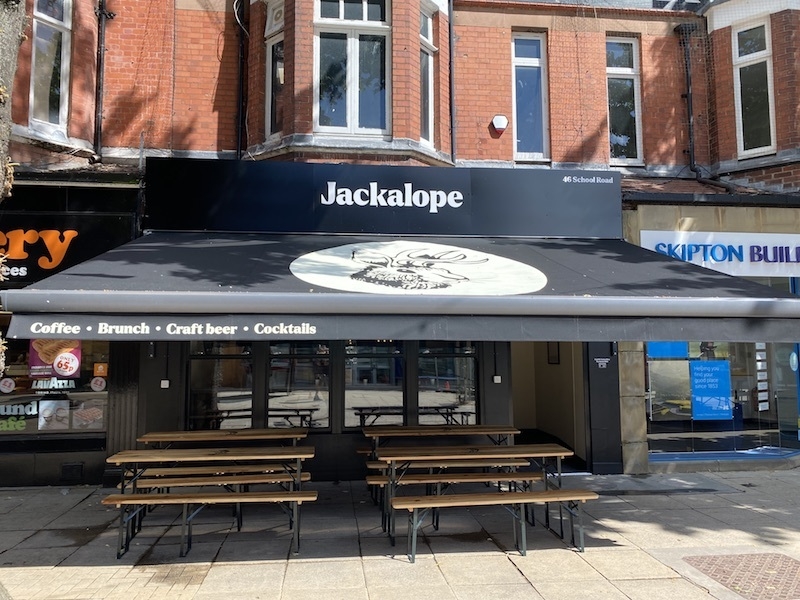 Even if you've never heard of kombucha, the gut-loving drink made from fermented tea, there is plenty of "regular" stuff on the menu here - coffee, brunch, cake, all the usual suspects. If you are a fan of the 'booch though, here is something you might not yet have tried. Owner Jake Filson brews his own kombucha and has developed his own "hard" alcoholic version. The result is a range of craft cocktails that might just be a tad bit kinder on your tummy than the usual variety. We think that depends on how many you drink of course. Worth finding out.

Another excellent family restaurant, this spacious Italian overlooks the Waterside Plaza and is tucked under the theatre and arts centre of the same name, making it an ideal choice for a pre-performance nibble or drink. Pasta and pizza (although Roman style this time, to ring the changes) reign supreme, though we love the sharing boards and it even has its own mini gelateria to visit on a sunny day.

Part of the original Northenden Road vanguard of restaurants, this cosy diner serves all-American classics such as Louisiana BBQ ribs, Buffalo Mac n cheese, all sorts of wings, steak Benedict and a glorious selection of burgers. It's a favourite with families and has a great kid's menu, as well as milkshakes for days. There is also an outpost just down the road in Altrincham.

For a while there, a good bar (as opposed to pub) was hard to find in Sale. Then Num6er came along and shook things up. The independent, family-run bar specialises in gin and whisky, a nice complement to the wine-focused Cork of The North next door, which makes this stretch of Northenden Road ideal for a cosy drink.

A really good fish and chip shop will never not be popular; but Off The Hook has thought of a few different iterations to make the British classic a tad more inclusive. Vegan fish and chips, halloumi fritters and vegan hotdogs mean no one has to miss out on a Friday night chippy tea. Gluten-free versions of some dishes (including the all-important gravy) are also available.

This sushi joint was primarily a takeout, with katsu curry and donburi competing with beautiful bento boxes for Sale's affections. Then it moved to a shiny new unit up the road and has become more of an eating-in place, with the noodles being a popular lunchtime choice. We still heart those bento boxes though.

The Perfect Match is a restaurant that revolves around simple but genius concept - each course is matched with a wine chosen to complement it perfectly. That could be chalk stream trout paired with a honeyed fruit Sicilian Fiano or basil panacotta with strawberries, matched up with a late-harvest Tokaji. Our reviewer was blown away, and the Michelin Guide was impressed too. Currently nominated for the MFDF Neighbourhood Venue of the Year.

Sale's whirlwind tour of European cuisine stops off in Portugal, figuratively speaking, with this blue-tiled newcomer. Small plates such as saffron poached octopus salad with bashed new potato and onion pickles; pork belly, pig cheek and curly quaver with artichoke puree or Portuguese classic tomato rice served with salsa verdi all get our vote. Some gems on the wine list too.

Fun and family-friendly Italian, that yes, does classic Napoli-style wood-fired pizza but also Southern Italian street food delights that are often decadent, deep-fried and dough-based. Not for the healthy eater perhaps (the pizza dough fried and decorated with Nutella puts paid to that) but a great place for tea with the fam.

Fusion food and then some at this Scottish-Indian mash-up, which reflects the roots of owner Ryan Singh. Dishes such as haggis pakora, (Indian) Scotch egg and duck biryani are served tapas size in traditional metal tiffin boxes while the Irn Bru negroni is a bit of a must-try.

The pizza empire now stretches out further than even its double-fermented dough can manage, with outposts in Leeds, Liverpool and London. The Sale branch has been doing a roaring trade in their panuozzo, a traditional Neapolitan sandwich. A typical pizza might be fior de latte and taleggio with roasted pepper and speck ham. Vegans will also be glad to know there is usually a vegan-friendly pizza on the menu too.

A slice of old-school Sale via Greece. The "2' on the sign we presume refers to the fact that Sokrates 1 lives in Horwich. The meze is the popular choice (this can also be tailored for vegetarians/vegans or gluten-free but make sure you let them know ahead of time) but we love the comforting and fragrant lamb kleftiko and a cold Mythos. Handy when you've missed out on a summer holiday in Mykonos yet again.

Another Altrincham transplant, Sugo barely needs an introduction, but just in case - this Southern Italian joint confidently eschews pizzas and concentrates on what really makes Italy great, pasta. From the scoglio (mixed seafood with cavatelli) to the meaty House Sugo ragu and monthly must-try specials, there are no bum notes in the tightly edited menu. The drinks are pretty decent too.

Read next: Another 20-odd new restaurants and bars for Greater Manchester

Read again: A look around the new Greens in Sale with Simon Rimmer: 'I'm loving what we do'