Now you can help the local economy, support the vulnerable and access some amazing food

Eat Well Mcr, the project that began in lockdown, initially as a way to feed frontline NHS staff, is launching it’s next phase – The Eat Well Mcr Marketplace.

The Marketplace is an online shop where customers can access food from some of the best independent local producers, brewers and growers. Any profits get ploughed back into the charitable organisations Eat Well Mcr work with, which aim to feed more vulnerable members of the community. Win, win.

Things are quite shit at the moment, so this just feels like a beacon of niceness

Customers who live in the delivery area (M1 to M9, M11 to M23, M25, M27, M28, M30, M32 to M35, M40, M41, M43, M45, M50, SK1 to SK5 and SK8) are now able to purchase a range of locally grown organic veg boxes, meat boxes from Meat Co Manchester, cheese selections from the fantastic Courtyard Dairy and a selection of other pantry items including chilli oils from Pippy Eats, fresh pasta from Konoba and sweet treats from Gooey (which means you can avoid the queue). Customers can also order beer from Cloudwater, unique bottled cocktails from Into The Gathering Dusk and a range of natural and low intervention wines.

The marketplace will also stock a range of high quality meal kits from a rotating cast of Manchester's best chefs and restaurants including Baraxturi, Tampopo, Blackbird Pantry from Radcliffe market and Honest Crust Pizza.

Since April, Eat Well Mcr has prepared and delivered over 20,350 meals to homeless people, people experiencing food poverty, women seeking refuge, and people who would benefit from extra support in difficult times across Greater Manchester. Every purchase from the Marketplace helps Eat Well MCR to continue supporting our community with nutritious meals, offers customers exclusive access to the best local makers and growers, and also gives back to the wider community.

Eat Well Mcr collaborates with local organisations and charities that already have a deep understanding of the issues and strong links with local communities, to make sure our meals get to those who really need it, quickly.

We managed to have a quick word with Eat Well Mcr’s founder, chef Mary Ellen McTague who also owns and runs The Creameries in Chorton, to find out more. 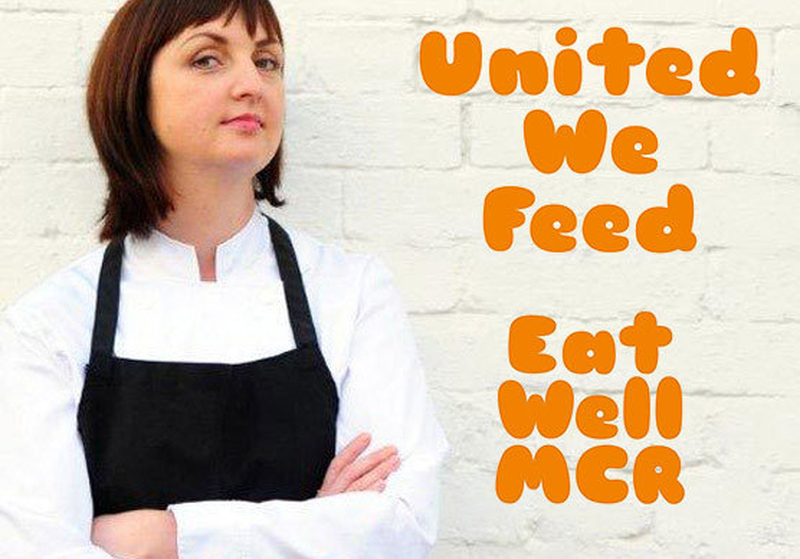 How did the Marketplace come about?

MEMcT – “The idea came up in conversation with Paul Jones from Cloudwater, who is on the Eat Well Mcr board. The idea was to engage with people involved in the local food industry who aren’t people you would normally buy from, so it was about opening up a route to market and supporting food businesses who have been through really hard time.”

What else are you trying to achieve?

MEMcT – “The aims are three fold: We want to support food businesses who have been working really hard over the last six months supporting Eat Well by feeding people who really need it. It feels like a way of giving something back economically.”

“Then, obviously, we need to raise funds so that we can continue the support work we are doing. That’s really important because we’ve started this and just because the main lockdown is over, the food policy hasn’t gone away. We always wanted to try and build something that was going to be there for the long term, so it’s a way of sustaining that.”

“Also, part of it was about people being able to get access to really good produce that they wouldn’t normally have access to - ace stuff like the ready meals cooked by really good chefs. So we want it to be a really nice shop for customers and we want it to be profitable for our vendors. Although we really want to raise funds, we don’t have shareholders that are demanding huge profits. We just need to cover our costs and have a bit on top.”

“I think it’s a massive cliché, but it feels like a bit of a Robin Hood situation. We’re not trying to compete with supermarkets, but we’re trying to offer really nice stuff, we’re going to price it so that the people who supply us can make what they need to make, and we can still make enough money to keep supporting people. So that’s the principal behind it. Things are quite shit at the moment, so this just feels like a beacon of niceness.”

What kind of people does Eat Well Mcr support?

“We’re currently working with Shared House who work with homeless families in and around Greater Manchester. Families who are being housed in B&B’s who don’t have access to a kitchen or cooking facilities and who live off Supernoodles. That also includes paediatricians, a dietician and a nutritionist who go around to these places to make sure developmental checks aren’t missed, because these are families who often fall through the gaps from not having permanent addresses. We’re working with them to provide nutritious, tasty food that can be reheated in microwaves.

“There’s another organisation called Home Start who support really vulnerable families with children under five and we’re going to start a pilot scheme in January where we’re going to provide meals, but also hopefully veg boxes and recipes and things that are, not just support, but kind of enhancing life skills and things.

“Each organisation we work with is really individual and they do specific things. We talk to them and then we figure out what we can do and how. So it’s gone from just being a massive scramble at the start where we were feeding NHS wards, which we’ve stopped now, to focussing on homeless individuals and families and then vulnerable people and food banks and that kind of thing. I think it feels like the right way to go about it. The long-term plan is to keep building these relationships."

View this post on Instagram
CHEESE! ON THE MARKETPLACE! Cheeseboards from @thecourtyarddairy 😍 There's only a few days left until launch day - get signed up if you haven't already. #EatWellDoGood
A post shared by Eat Well MCR (@eatwellmcr) on Sep 30, 2020 at 9:27am PDT

You must be pretty chuffed with what Eat Mcr has achieved in such a short time.

MEMcT – “Yes. I’ve never been involved with anything like this before, but what was surprising but really, really nice was that the appetite was there from people in hospitality to just feed people and for it not to  be about showing off or having a great restaurant or anything like that. Everybody just wanted to cook for people; for somebody, somewhere. And they just really valued having that connection with the wider community and it not just being about customers with disposable income, but thinking about the much bigger picture.”

Do you think you’ve been fundamentally changed by your experience of lockdown? Not just as a chef and a restaurant owner, but because of the experiences you’ve had over the last six months.

MEMcT – “Well, yes. I don’t think you can experience something like this and for it to not impact on you in so many ways. Like the way you see basic things like food and shelter. Seeing how it has been for so many people and it’s such a basic human need. Everybody’s had particular work related difficulties, familial difficulties, vulnerable people who you are really worried about and that all goes on and it’s a lot to deal with. I’m just really glad that I’ve had a focus during this time and that I’ve been really busy, because I honestly think I would have gone under without it. Not being able to work. Being stuck at home. I’m very glad to have had this.”

View this post on Instagram
The Eat Well MCR Marketplace is now OPEN 🧡 #EatWellDoGood
A post shared by Eat Well MCR (@eatwellmcr) on Oct 2, 2020 at 4:31am PDT

Will this whole experience change your direction because it’s an on-going issue. Won’t there will always be vulnerable people who need feeding?

MEMcT – “I don’t want it to stop. It’s been the absolute joy of my life in the worst time. It’s obviously been horrendous in so many ways for so many people, but to get to be able to do something during that, it’s been incredible and the plan is not for it to stop.

“We’ve got a plan now to hopefully make Eat Well Mcr sustain itself so that we’re fundraising for ourselves through the marketplace. At the same time, we’re creating jobs, we’re creating a route to market that’s open to anyone who cooks and does interesting stuff around Greater Manchester and so, no, I definitely don’t want it to stop. It is quite hard having The Creameries and Eat Well Mcr, but I’ve got an amazing team there and quite a number of them have really stepped up into more senior roles, which has enabled me to split my time, which is really good.”

Are you managing to fit in some sleep?

MEMcT – “I love the restaurant and it’s been so wonderful to be back and cooking and serving customers and pouring wine and being with the team as well. I’ve missed it. I’m definitely ready for a little rest, I’m knackered but I don’t want the restaurant or Eat Well Mcr to stop. It feels like such a good thing.”

Visit Eat Well Mcr Marketplace to see if you're in the delivery area, to browse the full range of stockists and to place your order.

The Eat Well Mcr Marketplace opens on the 2nd of October

Monday the 5th of October - deadline for the first delivery.

There 80 delivery slots available, plus an option to collect from Cloudwater Brewery.

Friday 9th and Saturday 10th of October - your order is ready for delivery/collection.