10 of the best dishes to try around Manchester this April

Here's the best things the team have chewed, nibbled and gorged upon in recent weeks - we think you should this month too.

Some dishes don’t need tweaking. And Yuzu’s 'organic salmon don’ has been on the menu at the tiny Chinatown restaurant since it opened because it’s perfect. Served on a beautiful tray - nearly as beautiful as the ingredients themselves - freshly cut salmon melds with sticky rice in the mouth, while parting clouds of miso forming a satisfying backdrop to the main event. An album of flavours if you will, it's the kind of thing you can enjoy time and again. Which I do. With promise of spring in the air, it’s particularly suited to this time of year - and at lunchtime it’s yours for a remarkable £10.50. Ruth Allan 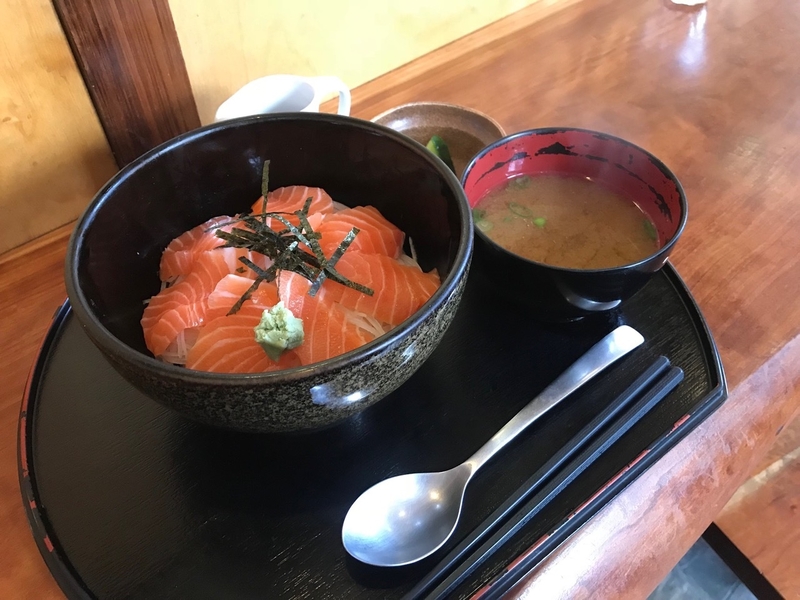 This dish came as part of Ben’s ‘British Tapas’ menu (available at lunch and teatime) and is a bowl of pure crabby pleasure. Some poor bugger in the kitchen has the job of dealing with these local, cold water brown crabs - some of the world's most handsome specimens - and is sorting them well. The flavours are deep, glorious and, if you’ve been to Moelfre Bay in Anglesey, will take you right back there. We scored it 10/10, worthy of any Michelin-starred gaff in the UK, for under a tenner. Fill yer boots. Gordo 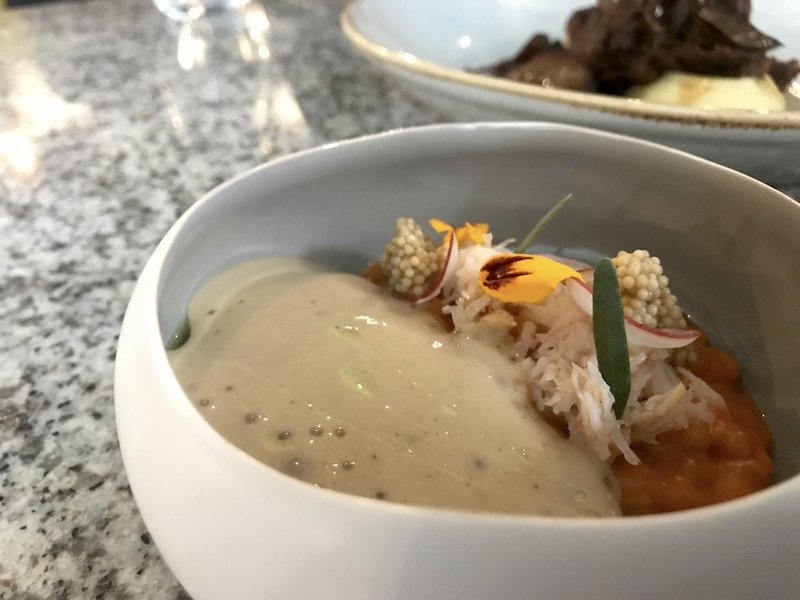 Let’s address the downside first. Yes, this is a lot of money to fork out on a piece of meat, and no, that doesn’t include any sides or sauces. It does however, come with a 360 degree view of Manchester (if that’s your sort of thing) and a bit of pre-meal ceremony. 20 Stories own dedicated meat man will come over with his special meat trolley and respectfully talk you through his display of different cuts, going into as much detail as you want about breeds, the ageing process, name of the farm, name of the cow etc. Aside from that, this giant steak will happily feed two or even three with a few added sides. It was cooked to perfection; tender and delicious. Deanna Thomas 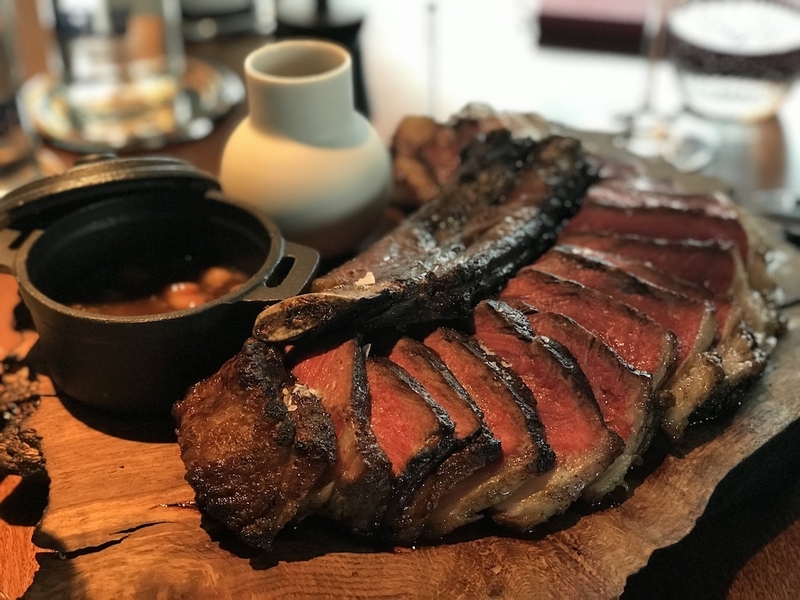 Squeezing into a 1970 Fiat 500 with a handsome Italian chap named Andrea and a large bottle of Limencello di Capri. What better way to toast Festa Italiana - Manchester's upcoming summer Italiano extravaganzo? Propping up Salvi’s Terrazza Bar in the atrium of the Corn Exchange with owners Maurizio and Claire Cecco, we were washing down a fine evening meal which included a stupendous seafood stew (top image) and, my favourite, Salvi's calzone fritti - a tomato and mozzarella pizza, fried and folded. Yep, fried pizza. Frying is, we're told, the traditional Neapolitan way to make pizza. It's also fucking brilliant (but of course it is, it's fried pizza). Doesn't look much at first glance, a bit like a large Cornish pasty, but cut yourself in to its hot, chewy, cheesy belly and you're winning, mio amico. David Blake

I’ve been to visit some vegan friends recently and while, as ever, I’m in awe of just how vibrant and delicious really good vegan food can be, I came back from my travels ready to break a few rules. This breakfast is a vegan’s nightmare, from the hearty slow-cooked ox cheek (‘you ate something with a face? And you actually ate part of its face?’), buttery, lemon-infused hollandaise sauce and tremulous poached egg spurting sunshine yolk all over the place. The only way I could do worse - from a vegan perspective - is if I smothered it in honey and ate it wearing a full leather catsuit. I went for homemade Sriracha and a bib instead, but I fear I’m still in the bad books. Never mind, because it was delicious. Lucy Tomlinson 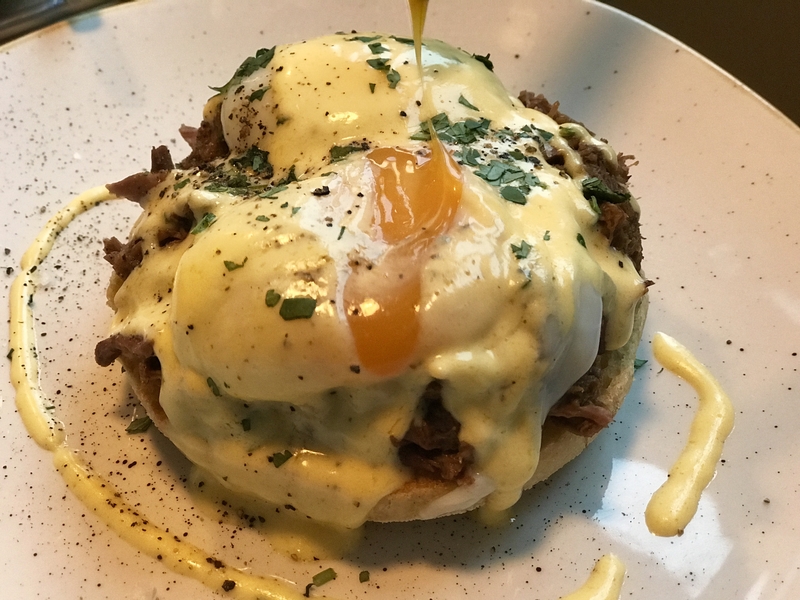 Squid and ox tongue (cooked yourself) - Annyeoung (£9ish each)

I don’t trust chefs anymore, I find them shifty, devious and unreliable except when they are talented, honest and brilliant. It’s almost like they are normal human beings, aside from the fact normalers don’t have a hundred people a night judging their every move. And taking photographs of their handiwork, posting it somewhere. Maybe up their own arse. Best restaurant joke, waiter to customer: “Do you want me to send your food back to the kitchen?” Customer to waiter: “No, it’s absolutely fine. Why do you say that?” Waiter to customer: “Well, you haven’t taken a picture of it yet.”

If you really don’t trust the chef go to Annyeoung and cook your own bbq, get the squid (£9.90) and the ox tongue (£8.90), cook them through on the kit in the middle of your table and then wrap them in the recommended sauces and lovely lettuce - it’s superb. And suddenly you’re your own chef. And if you’re doing it wrong and you don’t like it, then jump onto Tripadvisor and give yourself a terrible one star rating, maybe read it through a few times thinking your clever, and destroy your own one moment chef's career. Jonathan Schofield 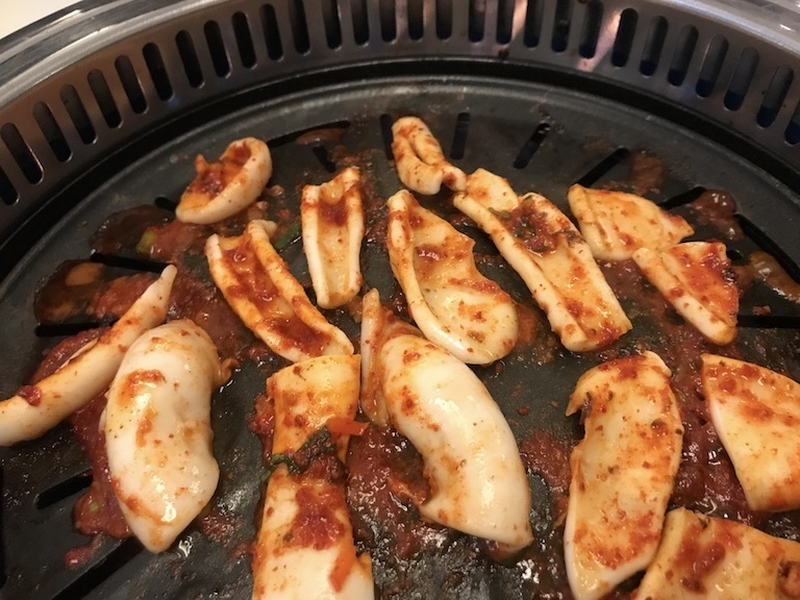 A Peach Mitchell doesn’t really have a ring to it. Mebourne-born Nellie Mitchell adopted the stage name Melba to further her career as an operatic soprano, gaining immortality as a dessert. What’s not to lick? Peach Melba was invented around 1892 by great French chef Auguste Escoffier at the Savoy. In the same London hotel Arnold Bennett had to settle for being a haddock omelette. In the hands of Simon “Did I tell you I won MasterChef 2015” Wood the Melba template of peaches and raspberry sauce with vanilla ice cream gets deliciously deconstructed. Hats off to the transformative addition of basil ice cream and meringue swirls. You can find it on the tasting menu. Simon is also not averse to tinkering with a Pavlova, named after Russian Ballerina Anna. Who needs to cross the street for a culture fix in HOME? Neil Sowerby 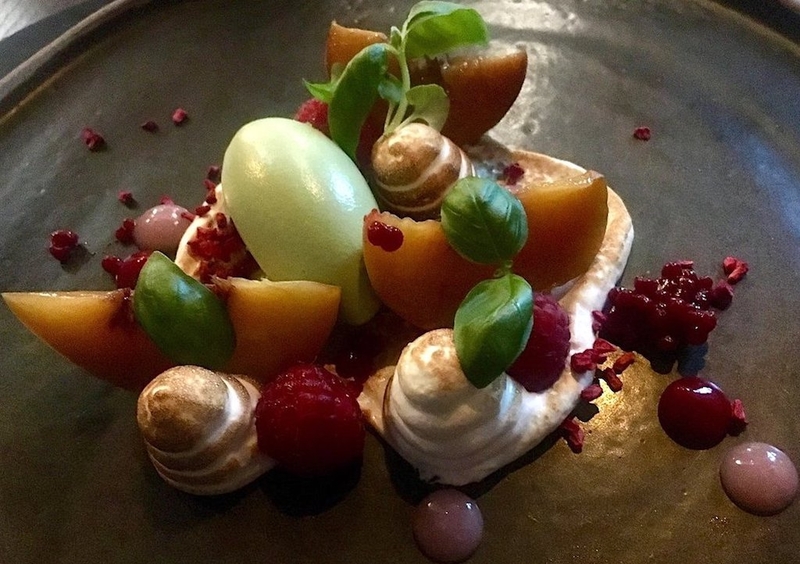 Gordo sat down one very cold Saturday lunchtime in Côte Brasserie, a bit miserable. 'Sod it,' thought Gordo, 'I’ll try this fish soup off the specials, it might be somewhere near the real thing'. It arrived. 'Fuck me,' thought Fatty, 'that looks bangin’'. Ok, a crouton smeared (thickly) with rouille, dropped on top of volcano-hot soup with a big, fat pinch of grated gruyere on top. Get a spoon in, fight the cheesy strands sticking to the marmite, burn mouth, go to heaven.

Côte are good. Gordo enjoys a civilian lunch here, reading the paper and pretending he’s in Brasserie Lipp. It’s also great value. Alright, so the soup was not made on the premises, but by the Goddess of Soup, this was utterly fabulous. It suited being made in a bloody big vat somewhere. Not sure how long this special is on, so get in there. Gordo 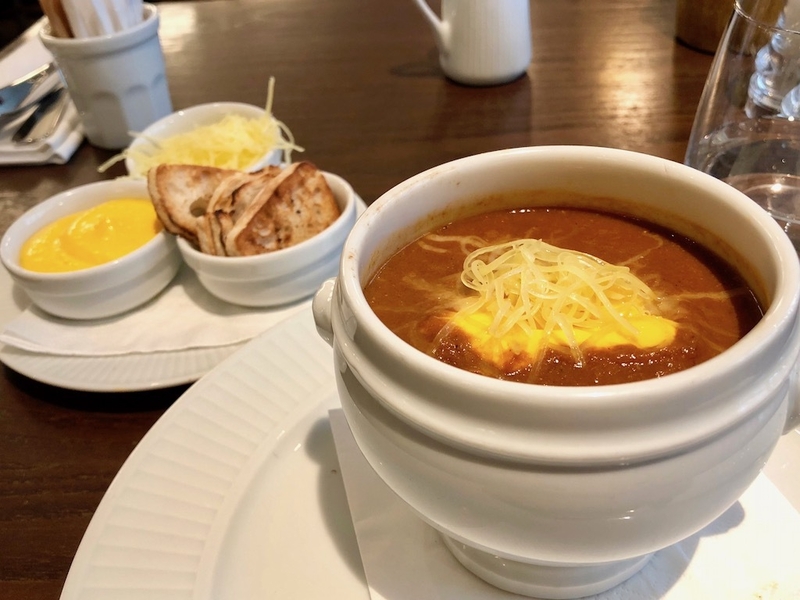 One thing the Catalans know, aside from their football, human towers and unauthorised referendums, is their onions. In particular, calçots, a large variety of scallion grown around Barcelona and Tarragona. Now, calçots looks like lanky spring onions, only more slippery, and taste like, er, spring onions... only milder... a little sweeter... maybe more like a leek... a wet, oniony leek. I'm not really selling this, I know, but it's probably the most fun you'll ever have with an onion.

Every year, sometime between January and April, Catalans celebrate the calçot harvest with calçotada, best described as a boozy onion barbecue. You'll find them gathered, sometimes in their hundreds, in public squares, gardens and parks, whacking great piles of calçots over flaming vines. Take one by the leaves, pinch the bottom and remove from it's BBQ-blackened skin to reveal the long, dripping green and white bit. Now, dip it in romesco sauce, tilt your head back and down it in one. If you're hardcore (and most Catalans are), you'll follow this by emptying a full porró of wine, at arm's length, down your gullet. Now repeat a dozen times, belch and fall off your stool. Viva Catalonia! David Blake 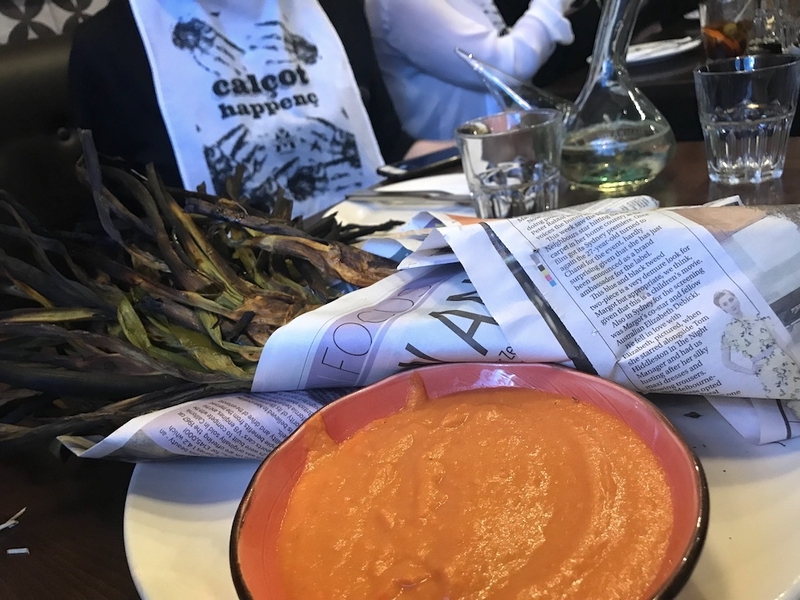 Oh, by the way, Lunya's smoked sardines are genius: plumper than your average, tender and oily with a mild smoky tang. Love, love, loved them. David Blake 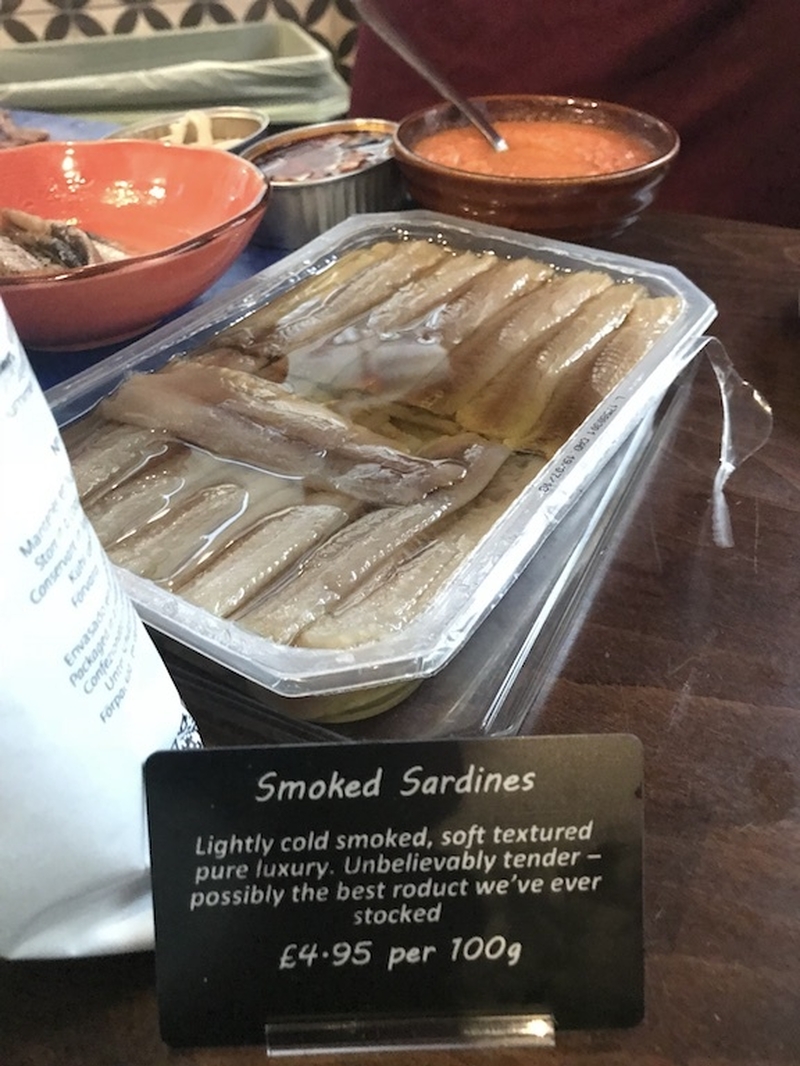 Enjoy this? Why not tuck into our best dishes from March 2018...