10 new restaurants on our radar

As if Manchester wasn't already one of the most eclectic places to eat in the world, we welcome 10 new restaurants serving, amongst others, Italian, Mexican, Indian, Peruvian, Japanese and Georgian cuisine.

Where will you start your world tour of Greater Manchester? 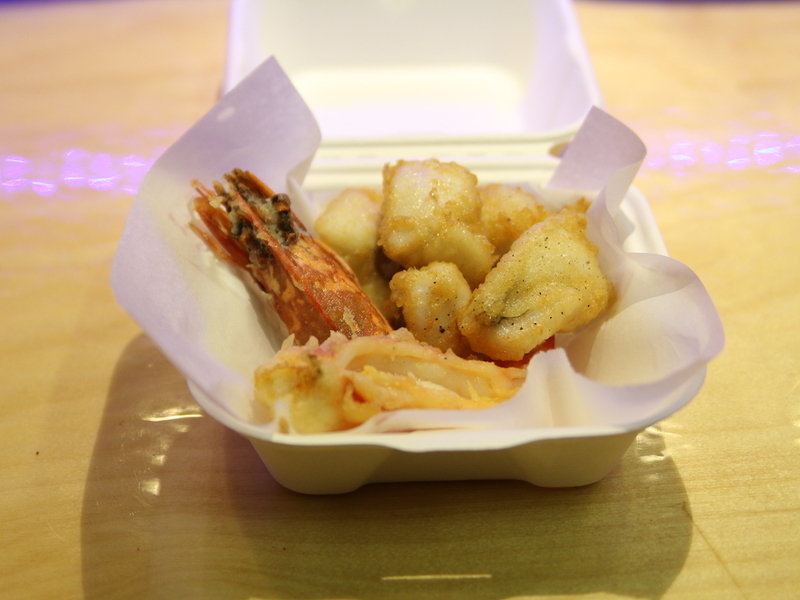 In a further surprise twist following the already shocking announcement that everybody’s favourite sushi restaurant Umezushi was coming to a close, it reopened this month as… a chippy.  In a frank interview with Confidentials, owner Terry Huang explained that the dramatic closure was due to ever more unsustainable running costs  - especially following the referendum in 2016 which saw the value of the pound drop overnight. Chish and Fips specialises in tempura fish and chips - along with other chip alternatives such as tempura aubergine or shiitake mushroom - with a choice of Japanese style sprinkles like nori of schichimi seven spice. Huang says this will also allow him to get a foothold on some other projects he has had up his sleeve for a while. 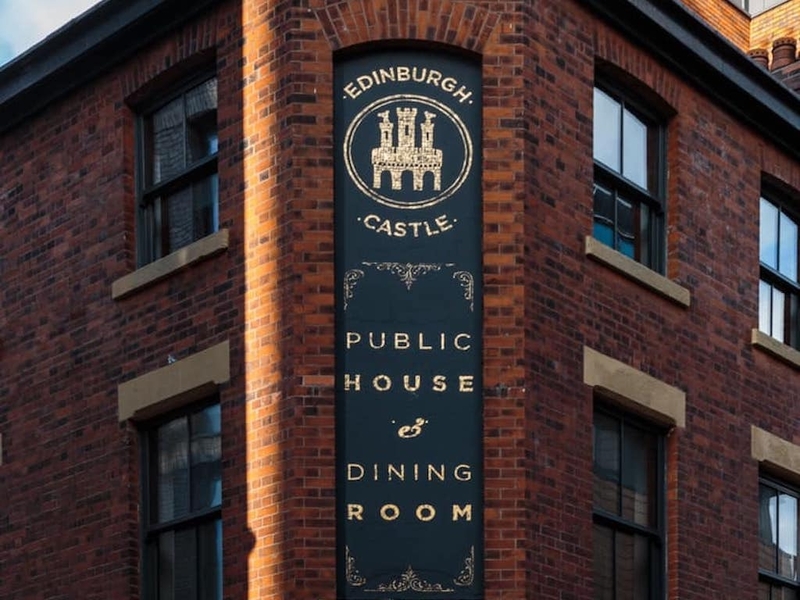 What: The Edinburgh Castle

The city has been all a whisper about this one for a while. Ex-Cottonopolis folk including Kiwi chef Julian Pizer have turned a well-loved boozer that has been standing empty for some time into a warm and welcoming proper pub again. Naturally, there’s a focus on local and interesting brews as well as quality wines and spirits. The pub food menu for now is full of comforting stick-to-your-ribs dishes with small plates including stout rarebit, crab toasties and an eclectic range of alternative scotch eggs. Mains span pies to fish n chips and bacon chop with cockles, while desserts include Vimto spiced Eccles cake. Sunday roasts look equally hearty, with everything from a milk-poached pork loin to a salt baked beetroot Wellington. A fine dining restaurant concept is set to open upstairs at the end of November. Read more here. 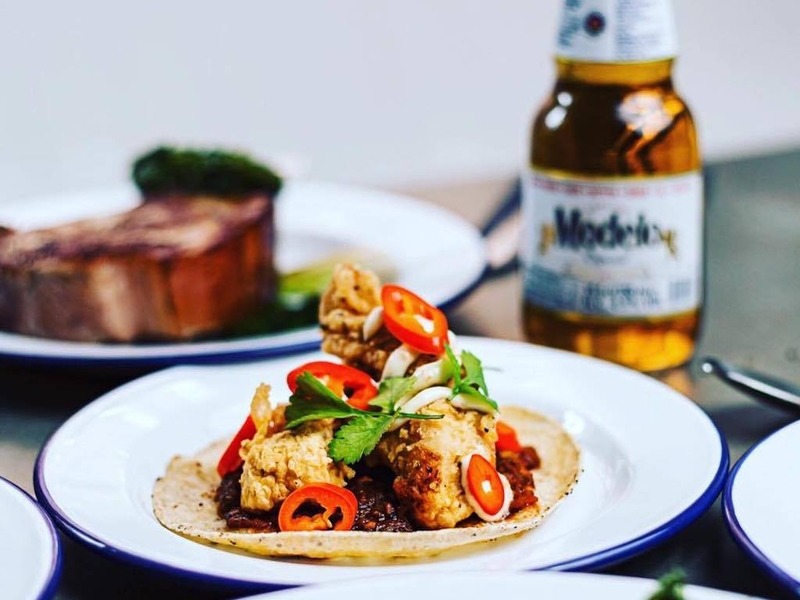 Following a successful three-month pop-up at The Cotton Factory at Whitworth Locke on Princess Street, El Camino has opened as a standalone restaurant. Situated in the former Get Chucked site in Urmston and with the same team behind proceedings, the monster burgers have been replaced with tacos, burritos and quesadillas stuffed with things like beer braised ox cheek, Baja fish, and chicken or jackfruit Tinga. Drinks include a wide range of tequila, Mexican-style cocktails and Spanish wine and you can even ‘Mexicanise’ your beer with either a lime and salt rim or by adding salsa, Worcester sauce and Tabasco. 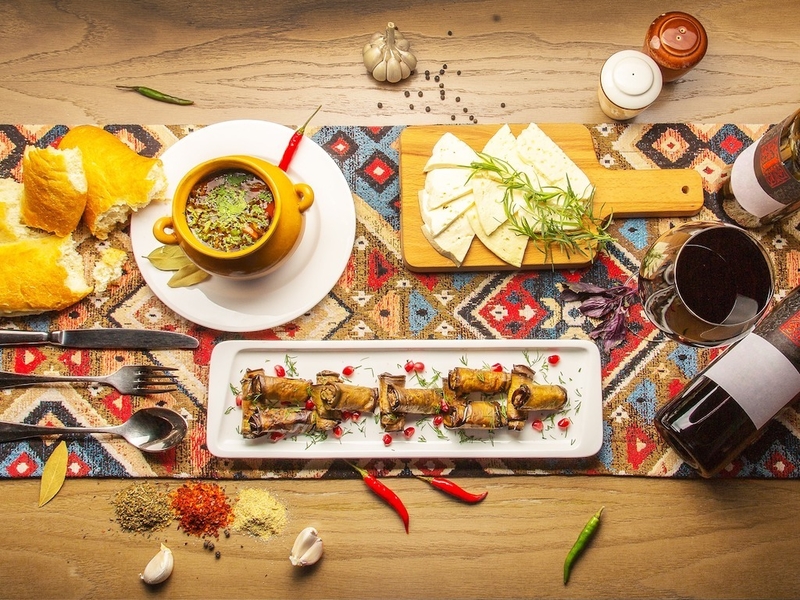 What: Georgia Kitchen and Wine Bar

Where: It’s shrouded in mystery for now

According to some wise folk, Georgian food is among the best in the world. So it’s odd that there aren’t many (any?) Georgian restaurants in Manchester - yet. Georgia Kitchen and Winebar is set to open around April 2020 and will not only be a restaurant and bar but will include a bakery and wine store. Expect dishes such as kebab platters, khinkali (soft dumplings) and cheese stuffed bread as well as excellent wine. Behind the project is founding director of Living Ventures and respected wine professional, Paul Newman, and it will be ‘introduced’ by MCFC legend - and Georgian native - Georgi Kinkladze. They are keeping the exact location close to their chests for now. 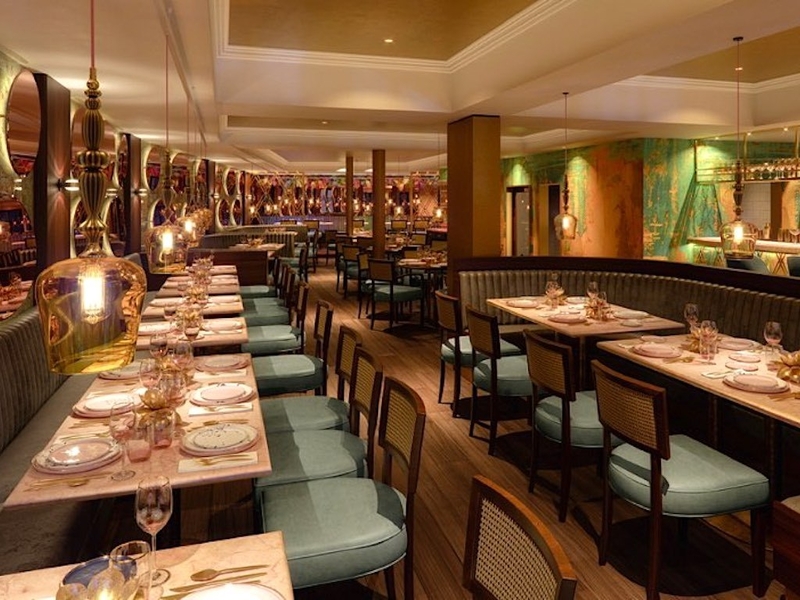 Over in Hale, a former NatWest bank building is undergoing a £1.5million transformation. Gupshup, Urdu for ‘chit-chat,’ is a new Indian restaurant from entrepreneur Raj Somaiya who you may be familiar with if you’re a fan of Real Housewives of Cheshire. With an interior design from the man behind the opulent decor of the likes Tattu and Australasia, you can expect something lavish and colourful. The menu itself promises traditional and modern Indian cuisine and will be open for both lunch and dinner. 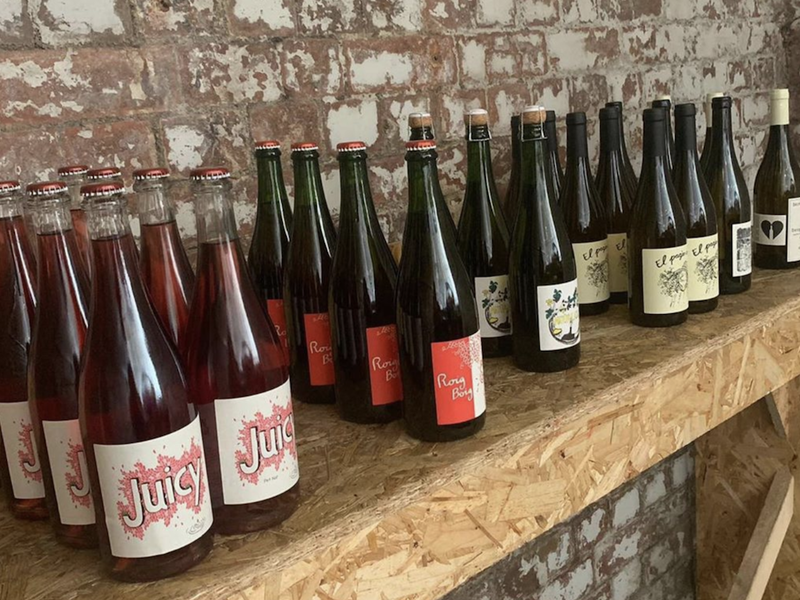 Proving yet again that Levenshulme is nothing if not eclectic, this natural wine bar with a focus on ‘celebrating the process from seed to ingestion’ is set to open next to the Cash Converters on Stockport road. The project comes from Issy Jenkins of critically acclaimed supper club Season’s Eatings, and Caroline Dubois - sommelier at Where The Light Gets In. Is-Ca - geddit? In keeping with the ethos of the biodynamic and natural wine movement, they are aiming to reuse and repurpose as much as possible so your table water will be served in ex-wine bottles and the lampshades are lovingly restored antique ones. With a vermouth workshop from Into The Gathering Dusk and a supper club from experimental chef Lorcan Kan (WTLGI) already on sale, this looks like one to get really excited about. 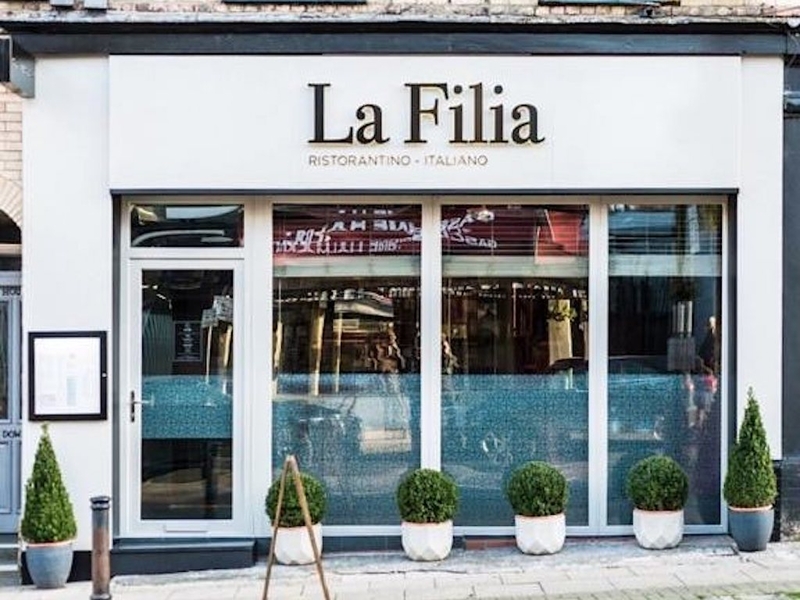 Altrincham’s diverse food scene just keeps on growing. Newest bambino on the block is Italian restaurant La Filia that opened on The Downs in September and is already proving popular. For owner Jenny Yacoumis, the restaurant biz runs in the family; she states her father George as her main inspiration. You can expect typical Italian dishes from this independently run ristorante but with some creative touches too. So there’s pollo Milanese, garlic and chilli king prawns, or spaghetti ragu (aka spag bol) but also a pizza topped with crayfish, anchovies and redcurrant jelly. 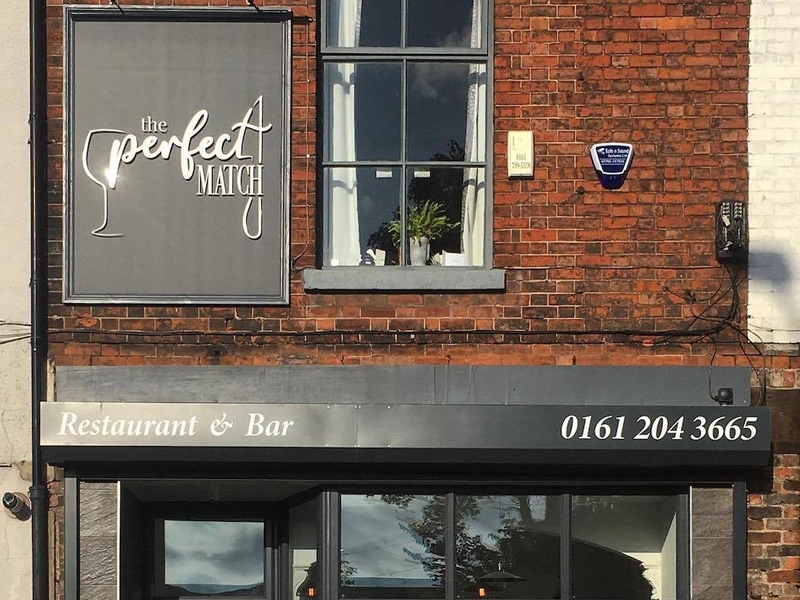 What: The Perfect Match

From head chef Jazz (who started at age 15 at The French at The Midland) and her sommelier partner Andrea comes a restaurant that centres around the art of matching food and wine. The pair met when both were working at Gordon Ramsay’s The Savoy Grill in London and, after bonding over a passion for the alchemy of a fantastic food and wine match, they decided to open their own restaurant. Each dish comes with a recommended wine (or other suitable drink) to create the ‘perfect match’. Expect dishes like fried squid, parsley and garlic mayonnaise paired with a South Australian Riesling, rib-eye steak paired with a Spanish Tempranillo/Cabernet/Merlot blend, or even seared rabbit loin served with a Brightside Brewery helles lager. 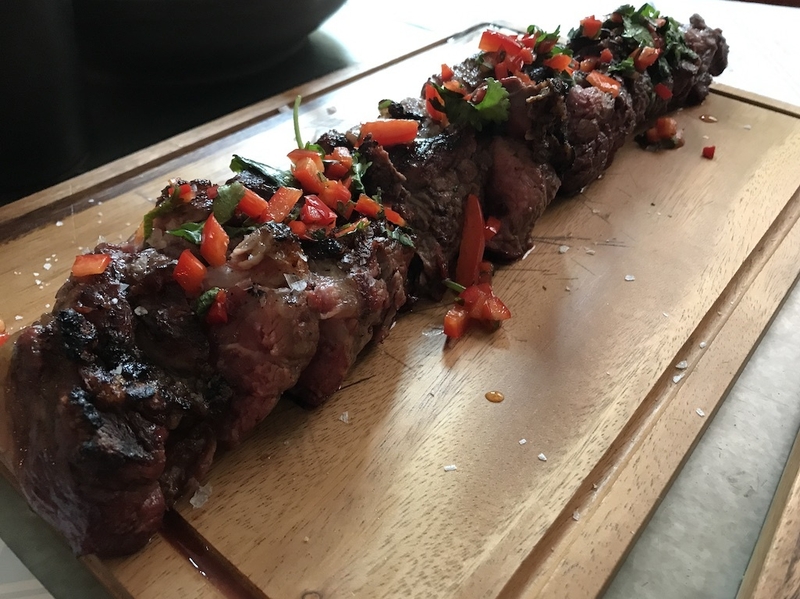 Taking over where El Camino left off, there’s a new pop-up restaurant in The Cotton Factory and it's staying for six months this time. Peru Perdu has been devised by Angus Pride and Jennifer Hughes of boutique northern hospitality consultancy Miam Miam Glou Glou. Heading South from Mexico, this is ostensibly a Peruvian restaurant concept but with dishes from other Latin American countries, like Cuba and Uruguay, thrown in for good measure. The menu has been designed with guidance from top chef David Gale, whose CV includes The Hilton, Abode and One Eighty Eight in Whitefield. It features everything from veg-centric quinoa bowls and coconut marinated ceviche to Uruguayan wet-aged steak served with straw potatoes. The Cotton Factory is a welcome addition to a part of the city that, notable exceptions aside, is a bit thin on the ground in terms of dining options. 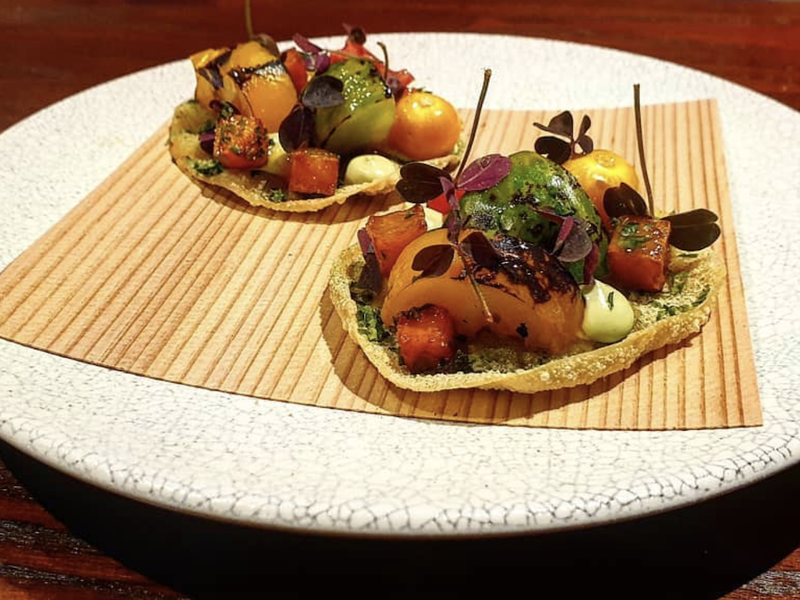 It may seem like a heroic attempt at creating a new kind of fusion food in a world where everything has been done before but Peruvian-Japanese has a longer history than you might imagine. Nikkei - a term used to describe Japanese people living outside of Japan - is also a unique type of Japanese cuisine made using traditionally Peruvian ingredients. It was developed by Japanese migrants to Peru during war times. You can now try it for yourself in the unlikely home of Salford in a new restaurant called Shoku. Dishes include Iberico pork belly & pineapple with algarrobina (carob syrup) and soy & pork popcorn, salmon tiradito: kombujime salmon (cured between layers on kombu seaweed), passionfruit tiger's milk, basil oil, squid ink and puffed wild rice or a dessert of sake plum dulce de leche ice cream, miso biscuit, orange blossom and meringue.