10 more Manchester artists you need to know about

From new urbanists to art activists, the local art scene is as lively as ever

Manchester’s artistic legacy is renowned. Showcasing over 16,000 works, its famous Art Treasures Exhibition of 1857 attracted 1.3 million visitors - including the likes of Queen Victoria, Charles Dickens and Napoleon - and remains the UK’s largest ever art exhibition.

But that’s not to say Manchester’s artistic talent all lies in the past; on the contrary, it’s as exciting as ever. That’s why we’re following up our 10 Manchester artists you need to know about with an equally diverse sequel, spanning intricate book sculptures to political installation and architectural embroidery.

From sketchbook doodles to hand-printed 3D animals, Kate Kelly’s whimsical critters are a long labour of love; right down to the ‘feathery hairdos and steel wire feet.’ Visit her studio in Manchester Craft and Design Centre - shared with Devines Designs and Wonderhaus jewellery - to see the full menagerie.

Tim Garner’s artistic career has taken him everywhere from Parisian squats to Breton villages (where he pissed off some of the locals) but it’s now his native North West he calls home. Renowned for his distinctive cityscapes, which blend painting and photography to slightly surreal effect, he’s become known as the ‘new urbanist;’ revitalising a genre that some may consider passé. Find out more here.

Founder of Affleck’s acclaimed Egoiste Gallery, Baiba Auria is perhaps best known for her vibrant portraits, which reflect well-known personalities as if through a refracted lens. Astonishingly, she partly credits her unique vision with…well, lack of her own. Born blind in one eye, and with the other deteriorating, Auria says ‘images and colours have a very powerful impact on me, frequently remaining in my mind`s eye permanently - like a library.’

Refuting the cliché ‘it’s grim up North,’ Cyprus’ paintings are vibrant celebrations of northern life; from rugged Pennine hills to old cotton mill towns with their own unassuming charm. Imbued with atmosphere, whether misty canals or the hazy glow of sodium lights, his work is nostalgic yet optimistic at once - inspired by everything from snatched conversations to brass bands on Whit Friday or a man wrestling with a wheelie bin. ‘The beauty is always right there in front of us…’

If you can say one thing about Emma Lloyd, it’s that she has patience. While the Kent native/adoptive Mancunian works in other materials, it’s perhaps her exquisite paperwork sculptures that she’s best known for. Pages are transformed into ammonites, cell structures and even people under the blade of her scalpel - making tangible the idea of books as otherworldly portals.

Winner of the first Great Manchester Arts Prize when it launched in 2016, Andrew Brooks uses photography, film and digital technology to explore both natural and urban landscapes. From futuristic collages to stereoscopic 3D and high definition SLR shots, his work offers surprising perspectives on familiar scenes.

Jack co-founded Paradise Works - one of several artist spaces in Salford including Bankley, Paper, Mirabel, Islington Mill and Hotbed Press - after being forced to relocate from Rogue (the North West’s largest independent studio group) due to property development. An artist activist, her multimedia installations often reflect societal issues; for example Host, nine bronze casts of wild plants that highlighted the politics of public and private space on behalf of the Manchester Homelessness Charter.

Originally a storyteller through photography and words, Len Grant added another medium - insightful sketches evoked in watercolour and fountain pen - on joining the Urban Sketchers; most recently publishing a lively tome on the ‘world famous’ Curry Mile. While we’re on the subject of illustration, some of our other favourites include Meha Art, Liz Ackerley, Reconsidered Retro and Guy McKinley but there are many more: check out the Manchester Print Fair for a handy taster.

Not only does Gina Kirby showcase other talented artists through GK Gallery, the enchanting gallery-slash-cafe she runs with her mum on Chapel Street, she’s also one herself. Literally weaving her love of architecture (which she studied at Manchester University) and textiles, her unusual embroidery pieces give new meaning to ‘urban fabric.’

He’s only just hosted his first solo show, with the aid of artist support agency Pool Arts, but Akinyemi Oludele has been making art for over twenty years; perhaps why Manchester Art Fair described him as ‘Manchester’s best known artist whose name you haven’t yet heard.’ Inspired by everything from black history to political satire, and the silhouette work of Jacob H. Lawrence, his work spans impromptu charcoal sketches to striking digital artworks (main image). 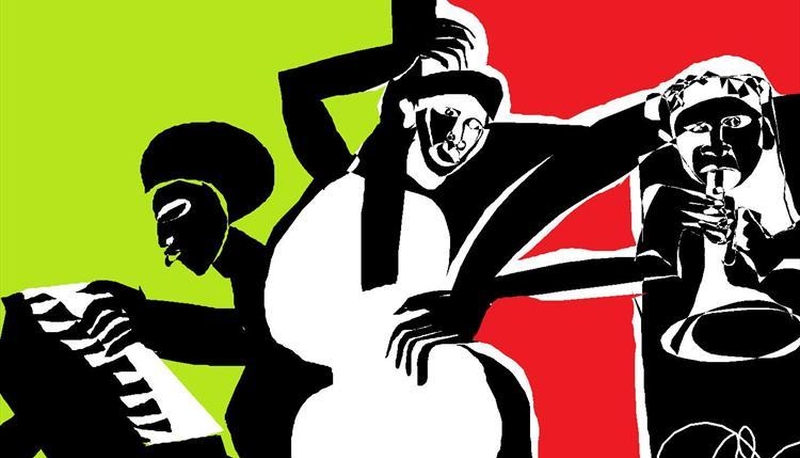 Enjoy that? Check out 10 Manchester artists you need to know about