Neil Sowerby gets battered at this new Far-Eastern inspired chippie

IT’S hard to translate the Japanese word shokunin - it means ‘mastery of one’s craft’ but it’s more like utter devotion. I revisited Jiro Dreams of Sushi recently, the cult foodie documentary where revered sushi chef Jiro Ono strives for perfection while his eldest son has trouble living up to his legacy.

Jiro’s now 94 and less often at the counter of his 10-seater three Michelin star sushi mecca in Tokyo. He probably needs a break after starting in kitchens aged seven and spending a lifetime perfecting one specific culinary skill.

Sukiyabashi Jiro is still one hot ticket. It was easier to get into Umezushi even in the wake of consistently glowing reviews. For Manchester it set the bar high. Then in October, after seven years in that cramped arch near Victoria Station, the city’s sole go-to place for quality sushi and sashimi shut. In a recent interview owner Terry Huang blamed the spiralling costs of ultra-fresh fish and difficulties in replenishing staff with the necessary skills. Bewilderingly the site has swiftly reopened as a chippy.

Chish & Fips isn’t an original name. Google it and Llandudno and Norwich each boast one. The C and Fs in Lincoln and Radstock are permanently closed, alas. Fast food is a pretty competitive market, which makes the new Umezushi tempura batter-based project a bold move.

The interior is now determinedly Spartan. Timber minimalist to the fore. They’ve even ditched the large night-time city mural from the lavatory. Sit in rather than take away and it’s canteen-like sharing tables and benches. The wine cabinet is gone. It’s just beer, cider and soft drinks now, served from a fridge behind the card payment only booth and next to a rack for wooden forks and spoons. It’s a chippy, so food will be served in cartons.

Still the fish looked spanking fresh under glass on the main counter behind which the deep fryer now resides. The first time I popped in, the blackboard special was monkfish cheeks. Disconcertingly on a return visit it offered chicken katsu with Japanese curry sauce.

Along with a variety of sides, the other seafood items on the menu have to be bought separately, though those monkfish cheeks did count as a box item. They and a single large prawn for £8.49 both impressed, utterly Umezushi fresh in the lightest of tempura batter. The optimum oil temperature for which should be 180 degrees but in Japan there are many intricate variations in this – and batter preparation beyond the basic made-fresh flour, egg, ice cold water formula.

So often our own traditional chippies don’t get the oil (or far superior beef dripping) hot enough, the fish isn’t steamed properly inside and the batter doesn’t cook through. Result: greasy aftermath in the mouth.

Thinner tempura should avoid this, yet aubergine tempura and zucchini versions here felt greasy as they quickly cooled. Shitake tempura on visit number two was much more attractive. Maybe the inconsistency is just teething problems. The alternative chippie delight here is the sides, spicy kimchi at £3.49 and a crunchy wakame seaweed salad (£4.99). Inevitably I couldn’t resist a pot of mushy edamame. I wish I had. Utterly bland, it’s no rival to proper pea stodge.

No wine or sake offering, but beer does stray beyond Asahi. Taiwan honey beer, anyone? I loved my Gari Gose, an Umezushi collab with local brewery Runaway, an East German sour beer style homage to palate-cleansing pickled ginger. The brew is apparently made with kombu, sushi rice, root ginger and preserved wah plums. It costs £4.99 for a 330ml bottle.

Alternatively they also stock Sassy cider and perry from Normandy. A high end tipple; Selfridges stock it too. Sassy Cidre L’Inimitable costs £5.59 for 330ml at Chish and Fips or you could share 750ml for £11.99. A nice floral nose, but too sweet for my taste.

The other floral presence in the room, though, evoked the lost Umezushi I still pine for, wiping grease from my fingers. On the counter a glorious flower arrangement created by the restaurant’s long-time associate Junko Popham, tutor in Ikebana, the Japanese art form that originated in offering seasonal blooms to the Buddha. Another example of shokunin in action. 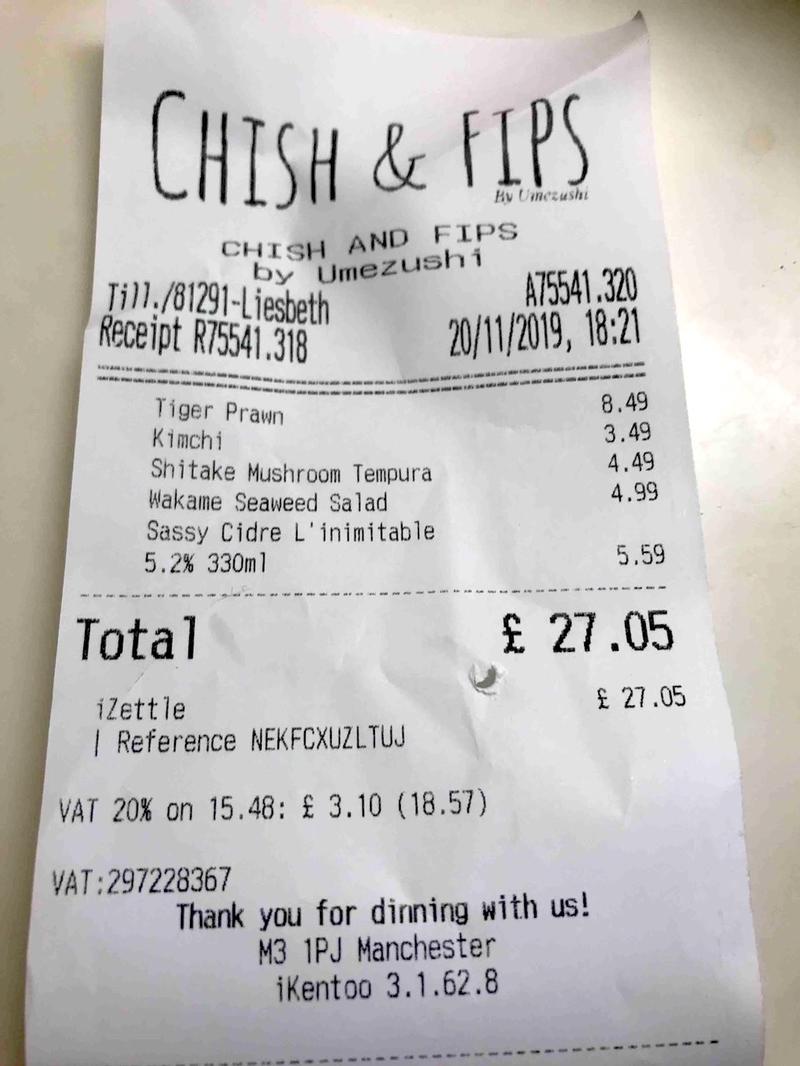 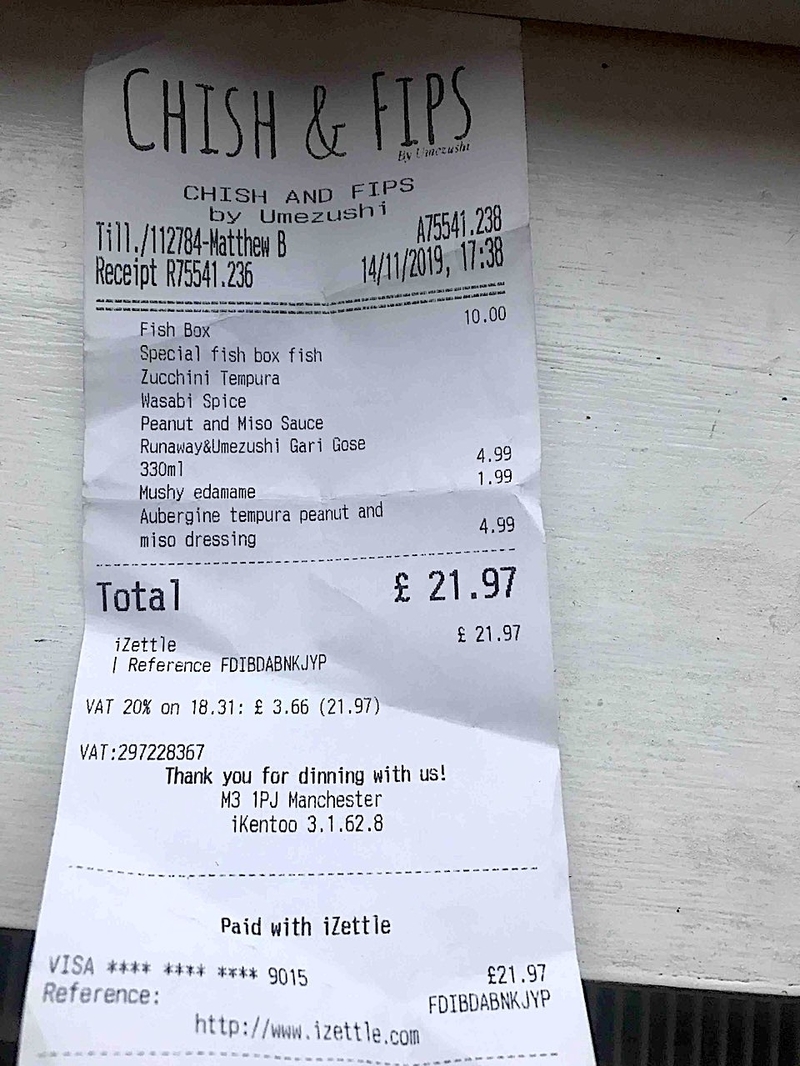