Twelve new bar, cafe and restaurant openings to get excited about

Manchester is ever expanding. It's getting more and more difficult to navigate the city centre landscape which seems to change on a daily basis. With that expansion comes a constant influx of new places in which to indulge. Whether you're a sucker for a new coffee shop, an influencer looking for a new elixir to gram, or are hungry and bored with the other 341648264 restaurants in the region, there is something here for you.

We have twelve new openings to tell you about this week - with a part two round-up coming hot on the heels of this one. These places are all either open now or will be open within the week.

Joining the myriad coffee shops of the Northern Quarter, Seed & Cherry's USP is that customers can try a variety of different beans with unique flavour profiles.

Just like with alcohol, they say there is a whole world of difference in taste and character between the many varieties of coffee in the world. The idea is to try as many as possible, learn to detect the nuances between different beans and find one that suits your personal taste. They also tick eco-friendly boxes as well as offering a tapas style menu with plenty of health focused and vegan options. 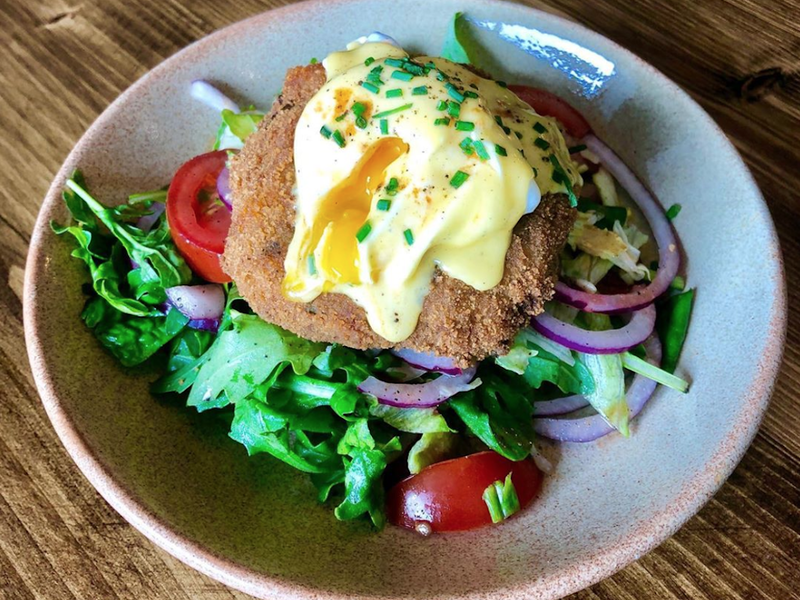 This tiny, welcoming cafe opened at the end of June and is slowly developing its offerings. With a focus on local produce and a community vibe. They source their coffee from Worker Bee in Stockport and their serious brownies and other sweet stuff from Moss Side’s The Bake Club. Word about their (BYOB!) brunch is spreading like pollen.

They recently started doing some exciting pop-up evenings such as ‘The Kennel’ with a focus on souped-up hot dogs with dirty great bangers from local street food hero Grandad’s Sausages. Keep an eye on their insta for details of future evening events, we hear burgers are up next. 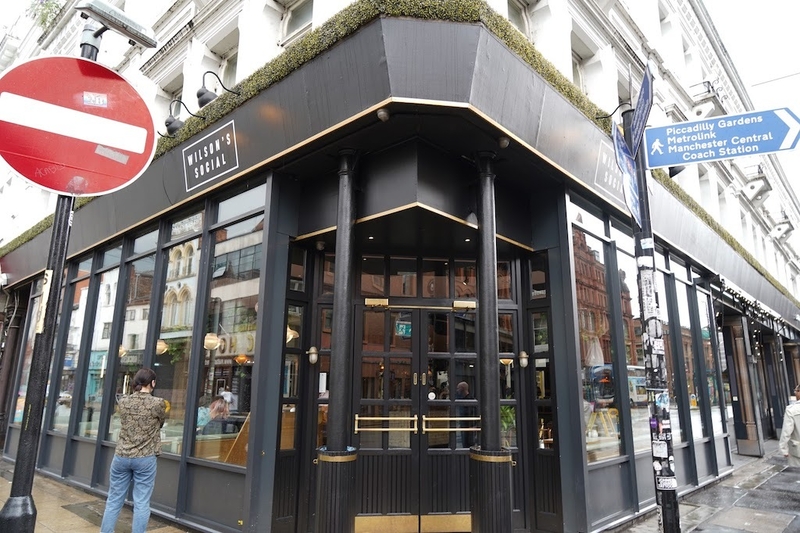 When - Open now, mostly, but with some parts opening later in the year

Taking over the space formerly occupied by Hatters Hostel et al, Latin-American born Selina NQ is not just one new opening but has its fingers in several empanadas.

It will incorporate a restaurant - Mr Wilson's (formerly The Patron), a cocktail bar - in association with the fabulous Speak In Code, a co-working space, a coffee shop -serving Grindsmith coffee, and an Irish pub - the refurbed Corner Boy. There will also be a basement club called The Cotton Club, in honour of Manchester's industrial heritage, with a programme of club-nights curated by Anton Stevens from Hidden. 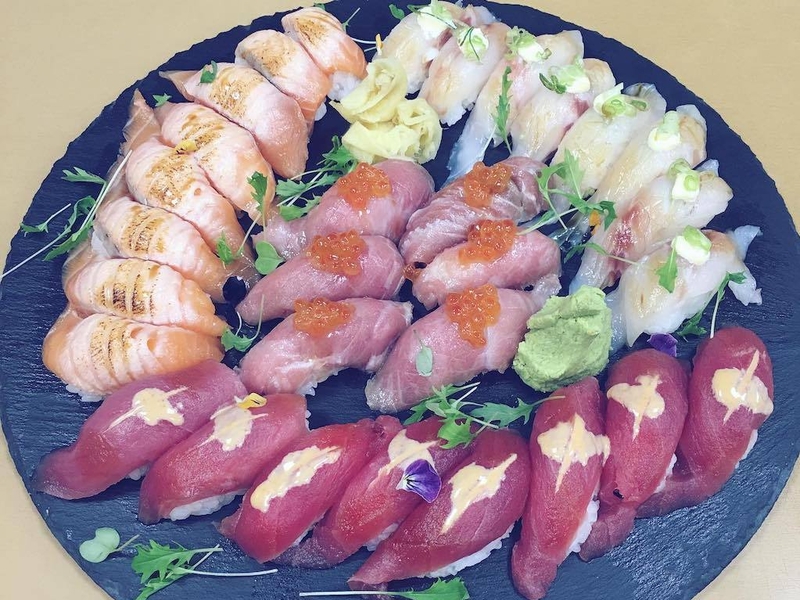 Following the success of their popular Chorlton branch, Sushi Marvel have recently opened in Ancoats. The creator of their menu trained in Hong Kong, Japan and London so has really mastered the fine art of rolling. Offering familiar sushi styles like nigiri, uromaki and futomaki filled with delights like raw yellowfin tuna, Otoro, a very rare cut of Bluefin underbelly tuna, surf clam, softshell crab and even wagyu beef. They also do larger dishes such as 'sushi burritos' and donburi bowls.

There is the option to eat in, take away or order platters for events. Unlike many sushi takeaways, almost all of their packaging is biodegradable or recyclable. 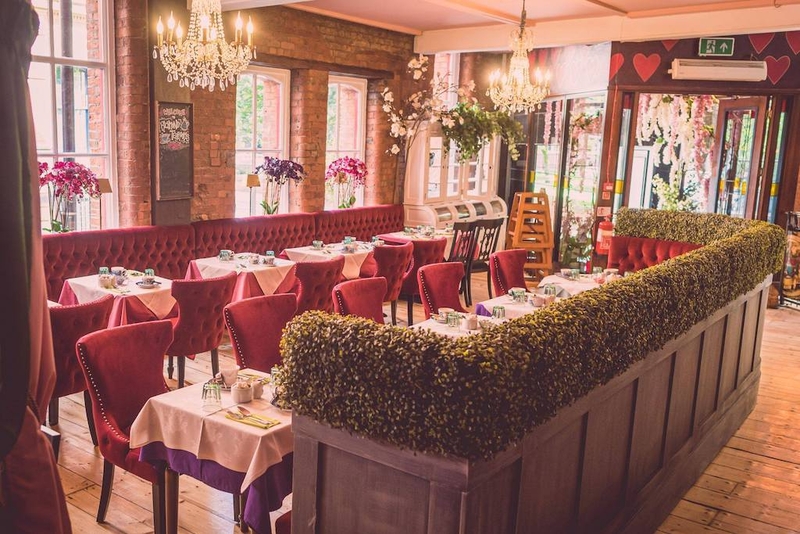 Manchester's maddest tea room has relocated and expanded in size. Famous for its extravagant afternoon teas and Alice in Wonderland themed decor, the tea rooms has always been busy and buzzing. The new site has retained many of the original features that regulars know and love: the diamond patterned walls, the silky draped canopies and the cute cake shaped counter complete with 'eat me' and 'drink me' signs.

As well as being bigger overall, there is a new 'orangery' which seems to have blossomed from the much coveted 'greenhouse' table in their previous home and now has space for several tables with wicker chairs, all surrounded by flowers and plants. But you will still need to book in advance for tables over four if you want a trip down this particular rabbit hole. 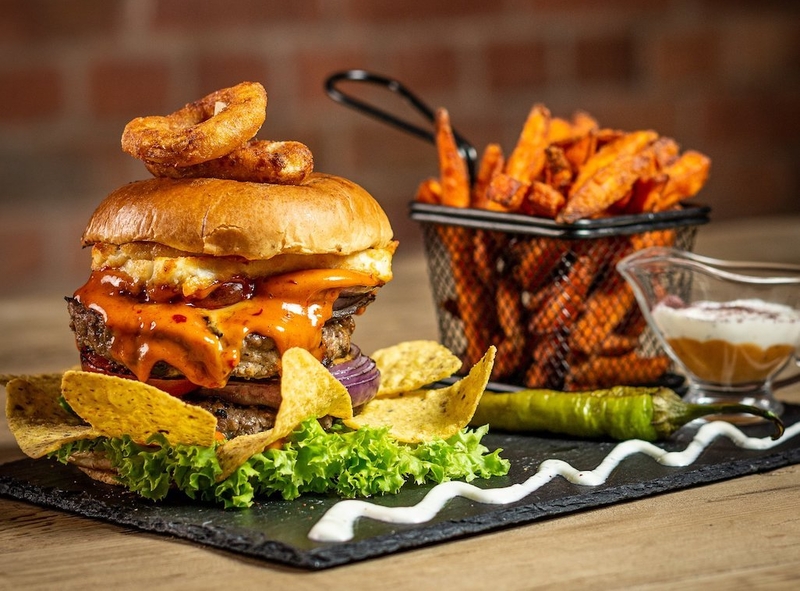 Just next door to the old Richmond Tea Rooms site, this Lebanese restaurant is a bit of a hidden gem in the Gay Village.  Recently bought out by local taxi company StreetCars and rebranded as Jasmine Grill, the menu has been updated to include dishes from all over the Middle East alongside its core Lebanese cuisine.

Expect Middle Eastern staples like grilled lamb chops and Turkish kebabs but also fresh and zingy chopped salads topped with pomegranate seeds and olives. There are even burgers with an Arabian twist. Their dazzling relaunch party was attended by Corrie stars and other celebs. 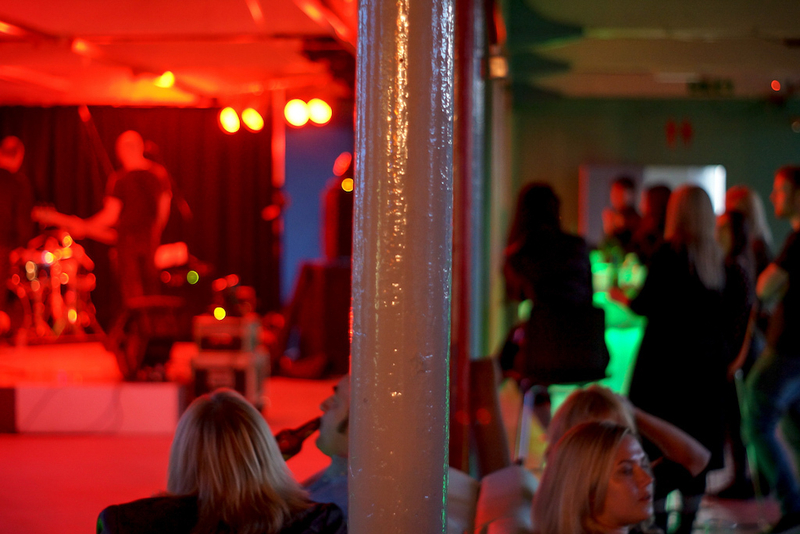 You may remember the story about a new mill conversion whose trendy loft apartments were only going to be sold to Mancunian owner-occupiers and not foreign investors. That mill was Crusader Mill and several new bars and social spaces have opened there recently, including Yerrrr Bar.

Only open Thurs-Sun for now, Yerrrr Bar is a super hip addition to Manchester's enviable music scene. It has the kind of decor you'd expect from a bar and music venue in a warehouse: exposed metal beams, painted pillars, and fixtures and fittings wrought from raw brick and wood. Vibe-wise it's somewhere between Aatma and Yes. Craft beer flowing, music playing and plenty of other events on the calendar for the future. Worth a visit, no? 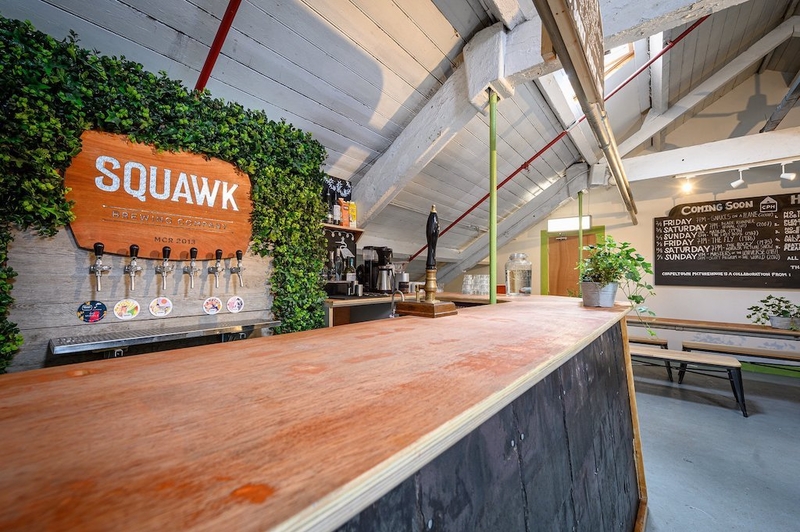 Also recently opened in Crusader Mill is a new taproom from local fermenters, Squawk Brewing Co. It's part of the brilliant Chapeltown Picture House who show quirky and cool films like The Lost Boys, Matilda and Scott Pilgrim Vs The World on their big screen, but you don't have to be watching a film to grab a pint.

Squawk was founded in 2013 with the aim of brewing experimental and high quality, hop-forward beers with traditional roots while maintaining their sustainable and ethical business methods. Recent brews include the jet black Corvus stout with notes of bitter chocolate, roasted hazelnut & burnt cherry and a Belgian beer aged in red wine barrels. 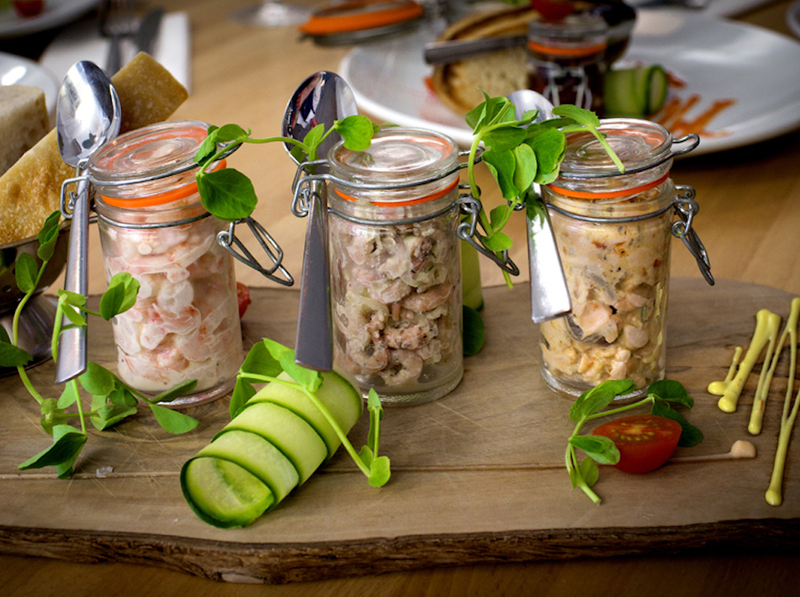 What - The Easy Fish Restaurant

The Easy Fish Company started with a quality fishmonger's in Heaton Moor in the late 2000s. This new restaurant in Wilmslow is their second, following one in Heaton Moor, and locals have been waiting with baited breath for it to open.

The a la carte menu is predictably aquatic with a couple of token meaty and veggie alternatives and plenty of sea-sonal flourishes. There are also shellfish and sharing board sections and a small plates based lunch menu. We expect nothing less than spankingly fresh fish cooked to perfection from this exciting newcomer. Review coming soon. 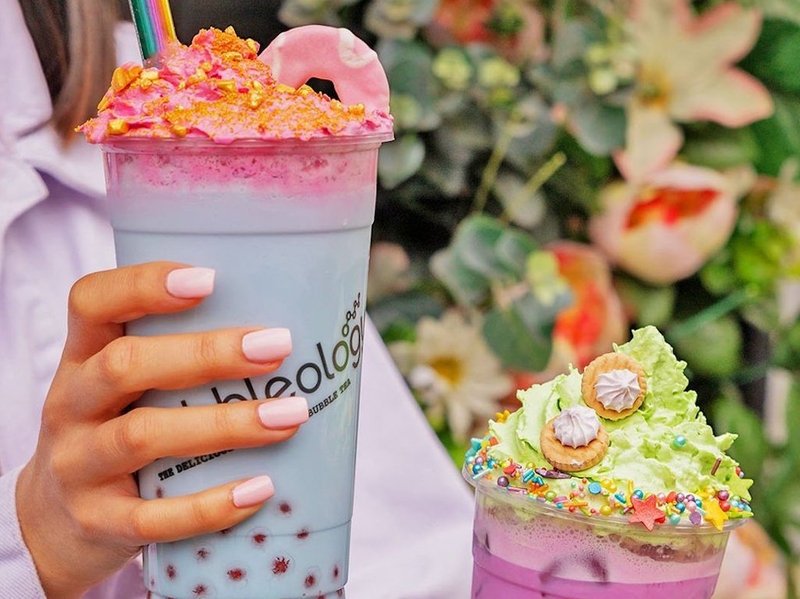 We Brits are renowned for our love of a good brew but Manchester has got bubbles on the brain these days as cute Taiwanese tea shops are popping up all over the city. Bubbleology's tea and waffle menu is bursting with colourful and creative ideas.

One possible reason for its popularity is that this place an Instagrammer's dream. The pastel coloured concoctions don't look anything like your average builder's brew but are topped with a kaleidoscope of whipped cream, crumbled biscuits, nuts, syrup and even tiny unicorns. Their bubble waffles crammed with ice cream, crunchy topping and sticky sauces are great for the 'gram too. Don't even think about sugar content. 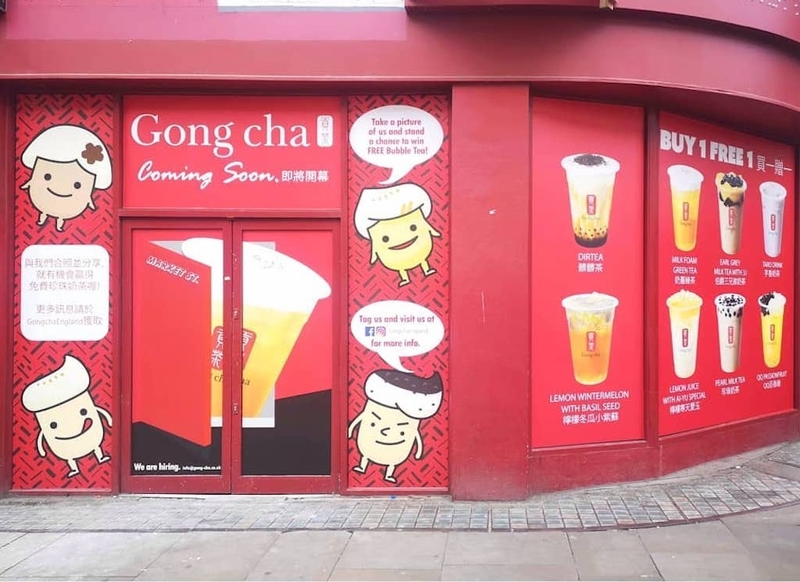 Another bubble tea franchise in Manchester and more proof that there is a huge appetite for the stuff. Gong Cha recently opened a branch next to Marks and Sparks on Moseley Street and their new one, just a few minutes walk away on Market street, is next to launch.

Gong Cha, which means 'tribute tea for the emperor' is a Taiwanese company that was founded in 2006. They pride themselves on using the freshest tea and 'pearls' (or bubbles) which are made freshly every four hours. With forty-odd different drinks to choose from, categorised as green tea, milk tea and slush with a choice of ice and sugar level. Specialities include the creamy, brown sugar enriched 'dirtea' and a special creamy (and slightly salted) foam topped tea which looks just like a pint of frothy lager. 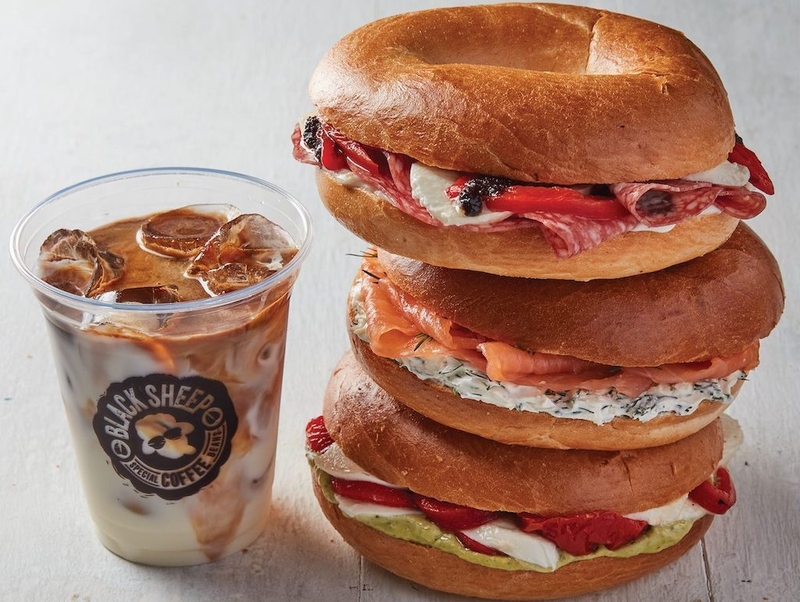 Black Sheep was dreamt up by a couple of coffee lovers in London who decided to quit their jobs and go it alone in the cafe world. Their goal was 'to challenge the establishment, take down the big corporate brands, and rid the world of boring, average-tasting coffee'. Making for a trio of outlets in Manchester, the new Deansgate branch of Black Sheep Coffee joins existing ones in Spring Gardens and Piccadilly.

Expect really good single origin coffee, tasty bites like bagels and pastries, and great cocktails. They get extra points for their efforts to reduce plastic.