ALL those compilers of the ‘Top Ten Hidden Gem Bars Only Cool Dudes Like Ourselves Can Let You Into The Secret Of’ – ever had the urge to kick them in the tumblers?

Quell your wrath. Take a walk up Jackson’s Row, after confusedly seeking an entrance in Lloyd Street, and you’ll arrive at the restrainedly Gothic looking entrance to Speak In Code.

If this sounds intensely po-faced, think again. Nathan Larkin and his merry gang have an ambitious agenda to make it onto the list of their choice – 'Best 50 Bars In The World', without sacrificing their principles. So no pressure there then. Yet they also want you to have fun – and that’s what we did. Twice. Fascinated by the focus on flavours the equal of tasting menus at Tast or Mana, in its own leftfield way.

For our second visit, Nathan, who started his bartending career at Hard Rock, was away in Cannes. He’d won a cocktail competition, with the prize being a trip to the Film Festival, so his oppos Connan (a Jamaican-Irish Brummie) and Joke (she hails from Merksplas in Belgium) were in charge of what is still effectively a pop-up. Though that may change.

Until 5pm it is the Jackson’s and Lloyds Kitchen coffee shop/brunch venue, entrance via 16 Lloyd Street. On your right, past the entrance and where the old Lloyd Street chippie deep-fryer used to be, you’ll find Greg Adam’s enticing spirits emporium, Tipples of Manchester.

By 7pm the big backroom is transformed into SIC, a separate business. The candles illuminate a rustic wood and brick setting, the MCRisSic cross-swizzle sticks branding in place. There’s a huge range of drinks, including beer, wine, spirits, even classic cocktails if you require – but you’d be mad to, given the twenty or so signature cocktails on offer, all given Roman numerals on the menu and costing £10.30 apiece.

This Roman Empire is one of equals. The waiting staff prepare the food, too, as well as crafting the various veg, fruit and spice-led concoctions that act as the bartender’s flavour palette. The artist analogy is very apt – the garnishes are real strokes of the brush stuff.

Take Japanese-influenced No. VIII (eight for those of you who didn’t do Latin at Eton with Rees-Mogg). The base is Suntory Toki Malt. It comes in a glass placed in a wooden vessel decorated Japanese-style by local artist Krystan Grace. A liqueur blend of pine, thyme and lemongrass is gently ignited to release their aromas. Stare into the glass and through a crystal clear ice block you’ll see the Suntory logo. There’s also a liquorice tincture and chai spices in the cocktail and on the side a pre-Prohibition-style medicine bottle bearing pink citrus soda to lengthen the drink from Old-Fashioned into Hiball.

Let me quote Nathan about the genesis of that soda: “The pink citrus soda is made from the offcuts and citrus fruits that we have squeezed out the fresh juice from, and then rather than throw them away, we make a citrus stock using the husks of lemons, lime and grapefruit. We mix that in a pan with water, citric acid, sugar, hibiscus flower, pink peppercorn and pomegranate molasses. We can generally produce around three litres of liquid from around twenty husks.”

This is symptomatic of how the bar ‘kitchen’ works. If this attention to detail helps makes VIII utterly delicious, regard the umbilical link between No. IV and the C-Dawgs that is one of the quintet of vegan snacks priced around a fiver. I’m not a huge fan of this ersatz ’furter in a bun, but I love that nothing goes to waste in the making of it.

They skin the carrots, then brine and cook them. Meanwhile the carrot skins are steeped in coconut water for a couple of hours. Strained, this goes to make SIC’s coconut, carrot and turmeric cordial – an essential part of Cocktail IV, essentially a tweak on a Colada, which also features Plantation 3 stars Rum, Green Chartreuse, fermented pineapple, coconut milk and lime juice. This is topped up with Cava, to form a kind of ultra-vegetal, alcoholic smoothie. Oh, and in case you pondered the fate of the carrot skins? They get fried off and dusted with coconut salt to form an edible garnish for the drink. Along with hops and cinnamon fried banana.

Pick of the vegan snacks was an intense beetroot hummus served with home-made flatbread (we expect the beetroot skin wasn’t made redundant) and mega savoury BBQ cauli wings with aioli. Jackfruit, also shown the grill, disappointed - as is its fate.

The other four cocktails we tasted displayed the range allied to a depth of innovation. From No.I, which was – as you’d guess – the launchpad for all subsequent fireworks. Smoked chipotle infused tequila with oodles of bitter infusions and, coup de gras – presented on a cassia bark chunk, a garnish of agar-agar gelled raisin pearls. Taste these first to get sweetness to prepare you for the bitter rush to come.

In contrast, No.XIX (19) is a simple shrub attack with London gin, Holy Basil tincture and lots of greenery allied to more of that pink citrus soda. Equally refreshing, but with more tang and complexity was the ‘Plant Potential’  IX (9), salt-rimmed margarita style with hibiscus, pomegranate, lime juice, bergamot oil and elderflower liqueur. Lip-smackingly summer in a glass.

Finally, a clarion call for sustainability – Cocktail No.2, featuring Ocho Blanco Tequila and Dry Curacao, eschews over-use of citrus in the bar by using a 'no lime' cordial with kaffir lime, kewra water, coconut water, orange blossom and oolong tea, boosted with malic acid. This is garnished with a rope aromatised with some of the above. 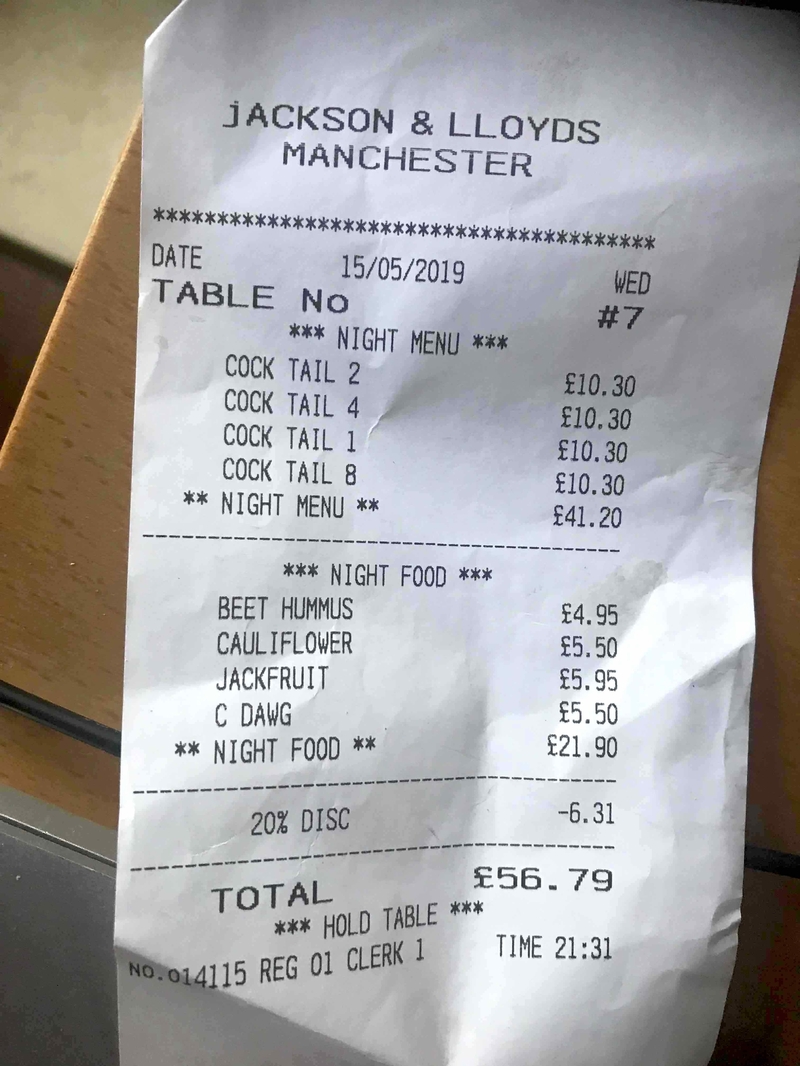 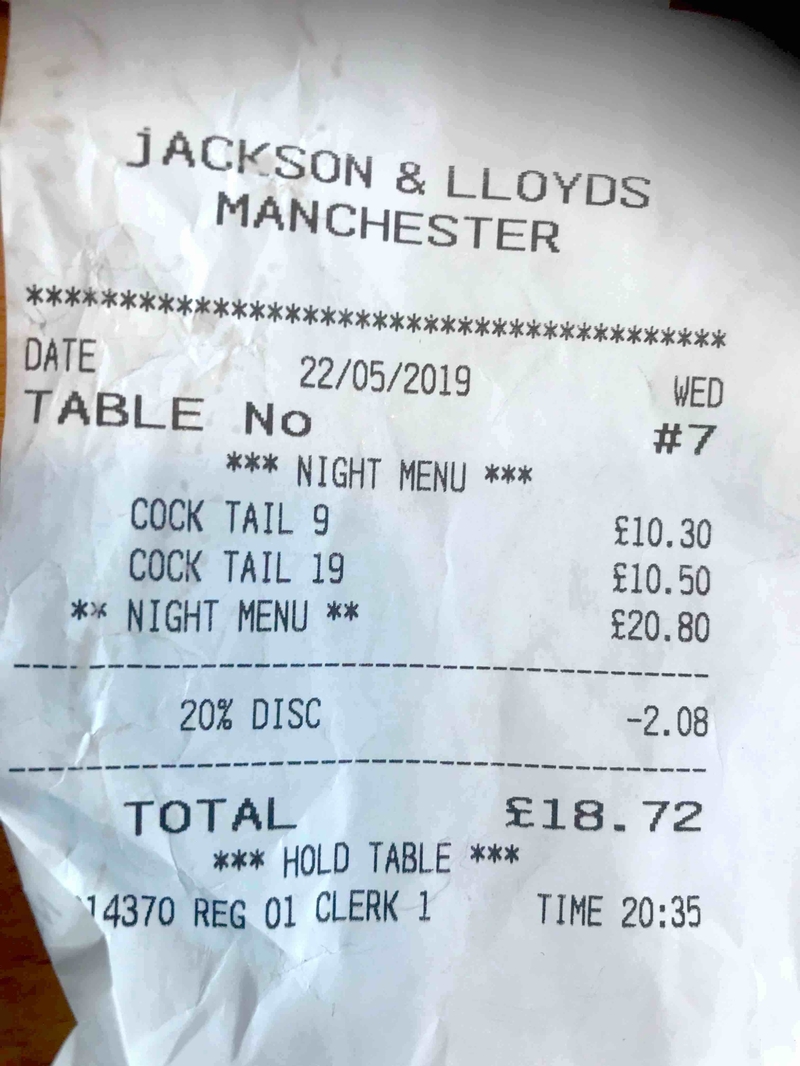