Clogs? The last time I reviewed in wooden soles was in another century at a gig by Bernard ‘Bolton Bullfrog’ Wrigley in some coalfield civic hall. Went well with the corduroy waistcoat I wore to Houghton Weavers hoedowns. Yes, punk passed me by.

To check out another famous Boltonian’s latest project I couldn’t resist dusting off those scuffed but still sturdy clogs. Particularly since The Northern, inside the Bolton Town Hall complex, seemed to offer the challenge of cobbles.

Alas, the cobbles (setts, really) turned out to be the pattern on the carpet of Paul Heathcote’s smart 100-cover homage to his North West food roots. Unlike that divisive pinewood patterned Wilton Simon Rogan introduced to The French, this made me smile.

There were welcoming smiles too from the young staff as a monsoon drove us in before the official evening opening hour of 5pm. The restaurant times are certainly ‘conservative’ – Thursday to Sunday, lunchtimes and early evenings, with a culinary curfew at 8pm.

I believe there might be chippy tea specials on other nights when the Albert Halls theatre hosts Sixties soul re-treads. It’s called putting bums on seats. You’ve just missed The Stylistics Greatest Hits tour but there’s still time to book for The Three Degrees on November 12.

The Northern launch, transforming what was the staff canteen, coincided with the recent council subsidised Bolton Food Festival, itself symptomatic of a great civic pride at odds with the bleaker reaches of the Bradshawgate bar drag at weekends.

Positive reinvention is a real struggle in towns that are effectively satellites of Manchester’s bright lights. But is the route to restoring pride paved with fake cobbles? Or a chance to play pre-prandial dominoes in the lounge? Which you can apparently…Or is it a dining room lined with images of the great cotton town it once was and every possible Bolton celeb since. Two Kays, Vernon and Peter, tick. Sara Cox and Fred Dibnah alongside sporting stars Amir Khan, Kevin Davies and Jay-Jay Okocha? I presume Nat ‘Lion of Vienna’ Lofthouse is leading the line, but didn’t spot him.

Back in Nat’s heyday the fans sported flat caps and so does the archetypal Northerner on the branding. I feared for a moment we might get served bread in a flat cap, which raised the hackles of critic Jay Rayner at one York restaurant. But no.

Confession – the clogs came out because the Northern menu offers a side of ‘clog o’dripping chips’ and I’m ever impressionable. Our server explained logistical hitches meant the fries would come in a more regular receptacle.

Compensation? What consummate triple-cooked chips arrived, accompanying my black pudding with grain mustard main (£10.95.) Little spud pillows under a mighty golden crunch, while the mushy peas had the essential stodge that no city slicker could mistake for guac.

Home-made black pudding is where I came in with Paul Heathcote 25 years ago, when his Longridge restaurant was hurtling towards two Michelin stars. He returned north from some pretty fancy kitchens to refine simple blood sausage into his smoother signature version, fat cube free, subtly spiced. I’m presuming the Northerner version doesn’t contain the sultanas and diced sweetbread of yore but at first bite it was a madeleine moment.

Ditto the gloriously bready-milky apricot-topped bread and butter pudding with clotted cream. A monster of a pud for just £6. Our other afters was a sherry trifle - a mite frugal with both cake and sherry. Treacle tart or Eccles cakes might have been a better nostalgic wallow.

The menu’s vegan option, salt-baked celeriac (£10) left the right balance of bite in the chunk of root veg roasted with hazelnut crust. The celeriac just about held its own against the strident nuts.

Three starters had set out the stall. The roast tomato soup (£4.95) contained malt vinegar, rapeseed oil and a swirl of treacle that made it ketchupy but soothing. When I told a Bolton exile my destination he rhapsodised over Warburtons - not the Robert de Niro endorsed bagels but the crumpet loaf. This duly arrived as carbs for a jar of dense, peppery potted salmon (£6), given oomph by dill and horseradish. Less impressive was a coarse, soggy dark rarebit and salad (£5.50).

Maybe in retrospect we should also have ordered Goosnargh chicken to commemorate the foodie equivalent of ‘Doctor Livingstone, I presume’, when 30 years ago the young Heathcote encouraged Reg Johnson, poultry rearer of that village to corn feed his birds. And the rest is history.

Which is what The Northern is about.

Both Bolton’s and Paul’s. He turns 60 next year and now concentrates on his events catering company, Heathcote & Co, which gave its usual slick performance at MIF 2019 but was a casualty of the Bolton Wanderers meltdown. One door closes, another opens. The Northern’s determinedly simple Heathcote & Co offering is generous and well-priced food with soul. Or before soul depending on the Albert Halls’ programme. 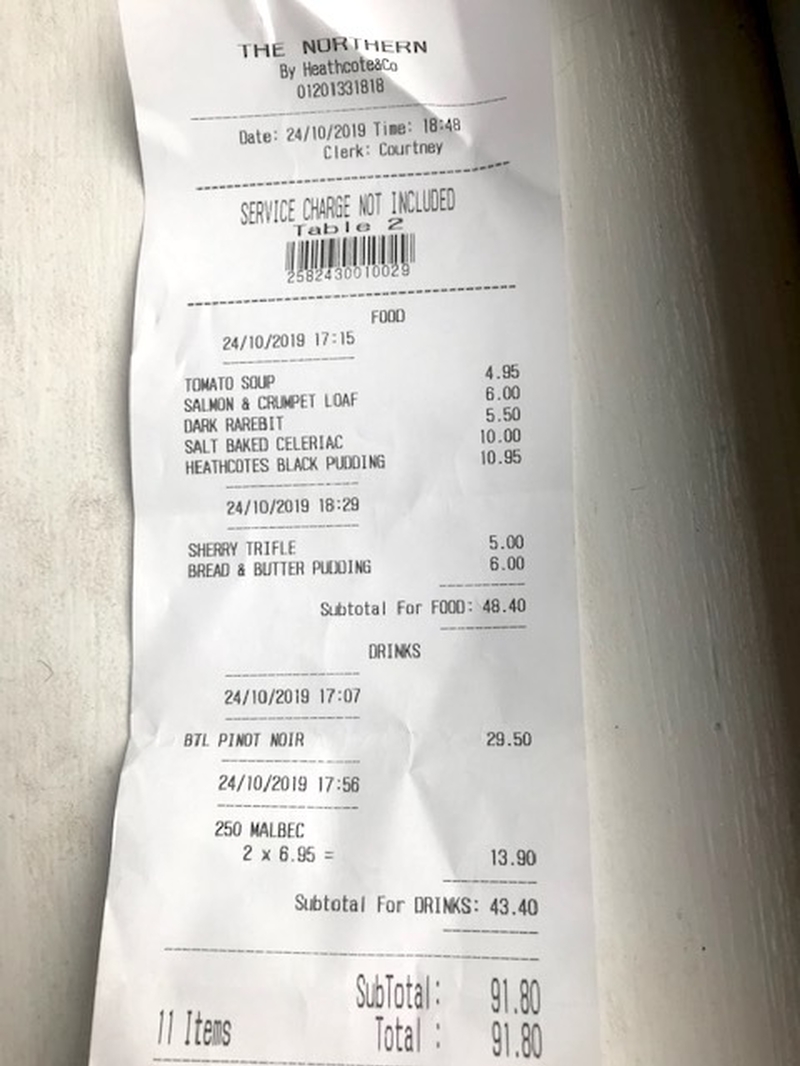