Alphabet, Beatnikz, Cloudwater and more feature in this beery roundup from Amelia Fearon

Manchester has plenty of fantastic pubs and bars that provide an opportunity to do some crafty drinking, but it's often easy to forget about where the magic (beer brewing) actually happens.

You can't get any closer to the freshly brewed hops than at the source itself and nestled away in railway arches and industrial estates are some of the best brew taps in the country.

Brewtaps are generally a laid-back experience with a major focus on the beer itself and relaxed vibes but you can find some decent food too, often provided by neighbouring venues.

It's worth venturing a little further out of the city centre than you might normally to be able to drink in a brewery. It's an experience quite like no other.

Here's our pick of ten brewery taps for a hop-infused drinking session.

Please note: All opening times are correct at the time of writing and articles are updated as often as possible but do double-check with the brewery in question before travelling. 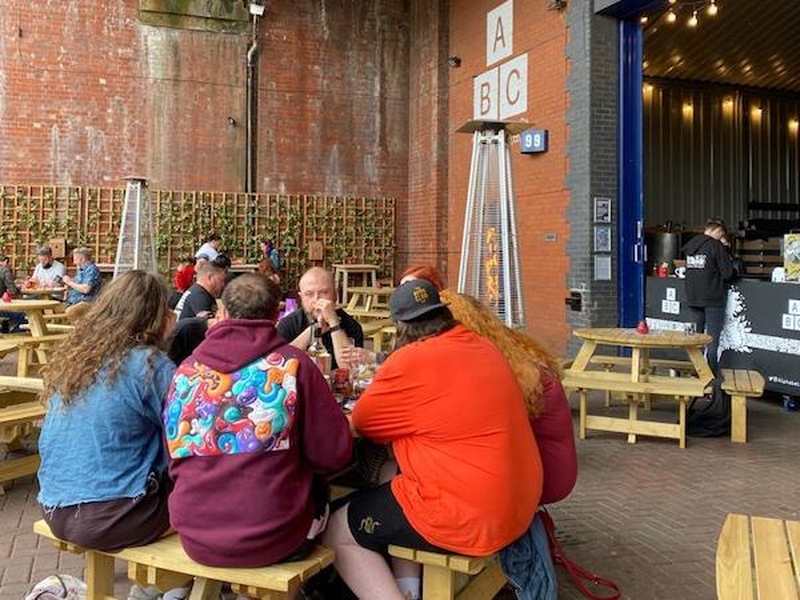 This Manchester-based brewery has been making hoppy and fruit-infused beers since 2014 and it is not one to miss from your radar. Alphabet is most famous on the craft beer scene for its vibrant and tropical Juice Springsteen (4.5%) but there are plenty more to work your way through with an impressive ten lines of beer on display. There's also a fridge full of cans - including their newest creations - that feature distinctive artwork drawn by Manchester illustrator and mural artist, Hammo - whose work you might recognise from the exteriors of Crazy Pedro's and The Bay Horse. Hammo's artwork also decorates the taproom walls and the brewery sometimes has live art events as he conjures up something new.

Alphabet Brewing thrives on community, and it loves to see a full taproom of happy beer drinkers. The picnic table style seating is spaced across a sheltered and heated outdoor beer yard. There are snacks behind the bar, but Alphabet also allows you to BYOF (or order your favourites on Deliveroo) to enjoy with your pint of Charlie Don't Surf (4%).  Open Fridays 5-10pm and Saturdays 12-10pm plus special ABC beer events. 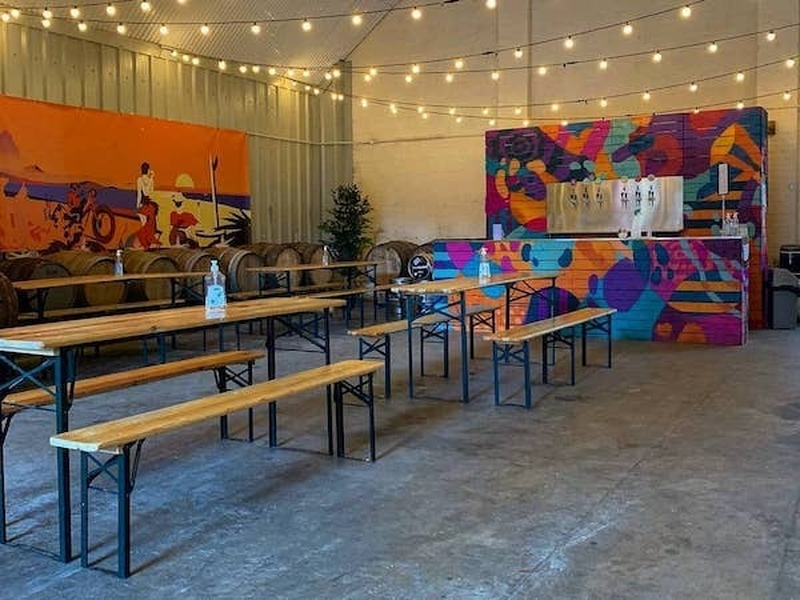 With award-winning craft beer, Beatnikz brewery's taproom offers six lines of the freshest Beatnikz kegged beer on draught, along with cans and mini-kegs to drink in or take away. There's no food on site but Grub and Sparrows are nearby and you are allowed to bring food from local neighbours in to enjoy with your beer. Open Friday 4-10pm and Saturday 1-10pm. Walk-ins only. There is also an excellent bar in the Northern Quarter with an extensive 14 keg and four cask lines. Half of these are their own beers and the other half is for guest beers. We recommend the tasty, spooneristic Sango Mour (Mango & Lime Sour, 4.2%) and the Tropic Fiesta Session IPA (4%). 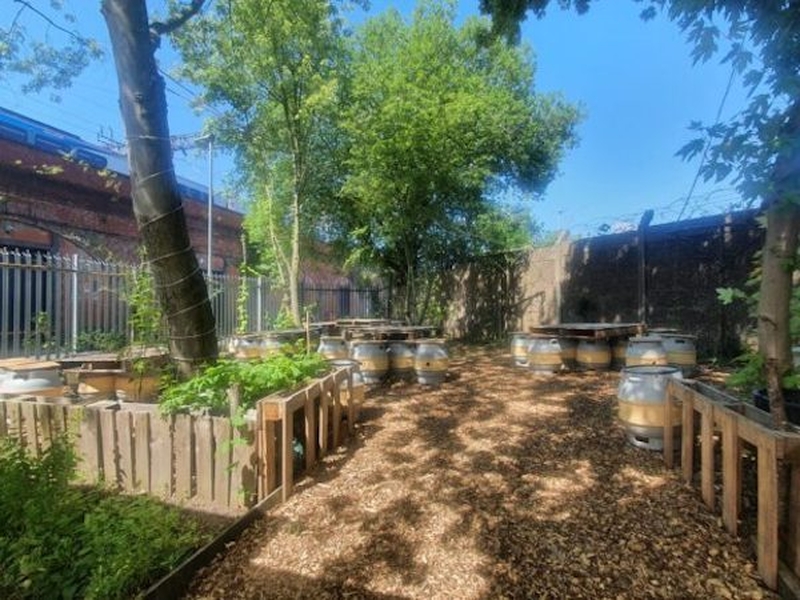 Just down the road from Alphabet, this brewery explores historical recipes and how they can give drinkers a refreshing blast from the past amid Manchester's modern-day craft beer scene. It's worth heading down to experience a taste of the "old days" with Beer Nouveau's "historic and heritage" beer range.

The only regularly brewed beer is Peterloo, a 4% light-bodied porter and the rest are subject to change as new ideas are being brewed up all the time. The heritage beers are barrel-aged to align with the ancient brewing tradition, with some recipes even dating back to Ancient Egypt and Viking times. Beer Nouveau has cask and keg beers on tap, bottles are available, and cider too for non-beer drinkers.

The outdoor space is bright and comfy with sofas and tables made from beer kegs. For the colder months, there's a fireplace to keep warm. Beer Nouveau is a good option if you want to have a crack at learning history whilst drinking. It's a niche. Oh and there's food from vegan junk food experts Wholesome Junkies and the Hong Kong style KC Chefs. Open Fri 4-9pm and Sat 12-9pm. 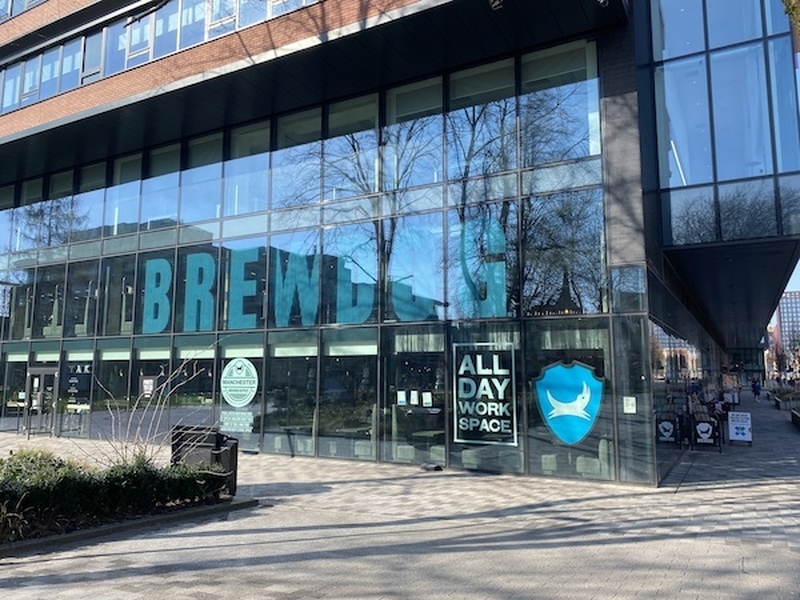 Brewdog is the biggest name on the list, taking the craft beer world by storm with 84 locations worldwide. It's not as independent as many other brew taps on this list but that's not to say that the outpost on Oxford road isn't worth checking out. There's a reason Brewdog is so popular. The brewpub on Oxford Rd near the university is a great spot to taste the BrewDog core range and you also have the opportunity to try exclusive creations from the on-site brewery.

BrewDog is a perfect start for people new to craft beer as well as being enjoyed by the more experienced as it provides a substantial range of beers, guest selections and incredible service. Try the classic Punk IPA (5.4%) or something a little more dark like the Jet Black Heart milk stout (4.7%). Brewdog also has its own extensive in house food menu with 10 different burgers as the main draw with salads, bowls and wings (unlimited on Wednesdays) in the supporting cast. Open daily 11am-11pm and until midnight on Fridays and Saturdays. 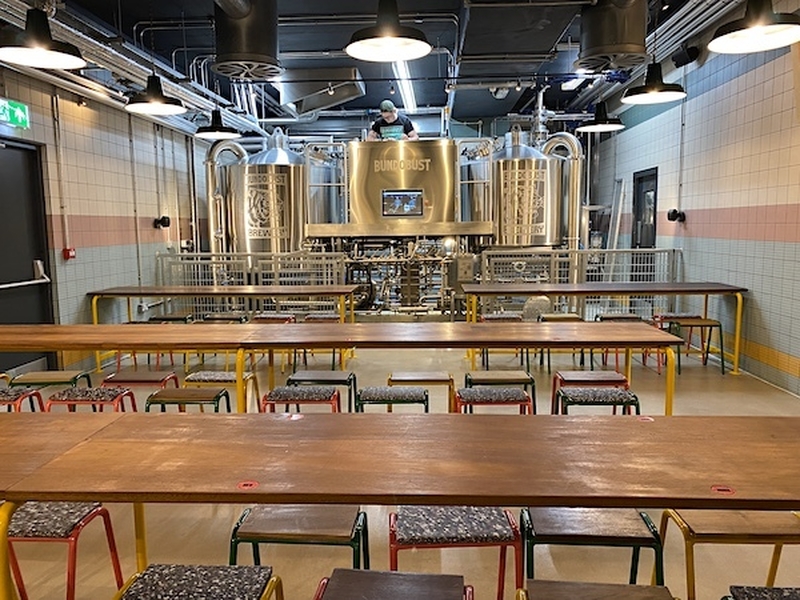 This taproom and bar from Bundobust was a long time coming but finally opened its doors in September 2021. Brewing a variety of styles inhouse such as the tropica, hazy pale Peela which is brewed with Azacca and Ekuanot hops, the crisp, coriander lager, Dhania, and Chattro, a nitro chai porter with all the good spices, Bundo also has seemingly endless collabs with other breweries on offer - current fave ais a salted lime sour with North Brewing Co. There are also cask ales and a multitude of cans behind the bar. No small mention should go to the food, it's crispy, snacky Gujarati and veggie and we defy you to find a better menu to go with beer. 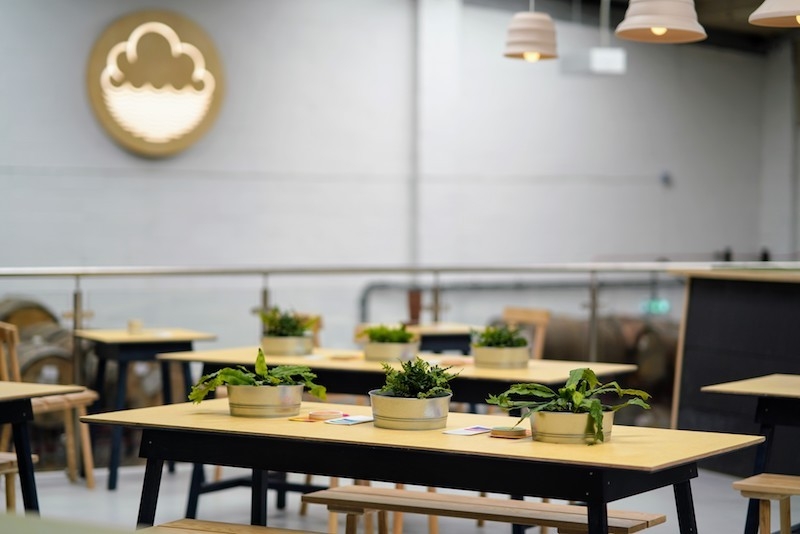 It wouldn't be much of a good brew tap list if Manchester-based legend Cloudwater wasn't mentioned, and rightfully so, as it's releasing some of the best craft beer in the country. Cloudwater is rated the second-best brewery globally. Cloudwater's Unit 9 taproom is right next to the brewery in New Islington, a short walk from the tram stop.

Unit 9 includes a bar with a massive 20 taps on draft - more than enough to get lost in - with the tap list changing regularly. Cloudwater is renowned for being very meticulous in how its beer is served so expect nothing less than a perfectly crisp pint as the draft lines draw from a 3ºC cold store.

There's a range of unique and stylish beers varying from IPAs to sours and even alcohol-free sodas on tap like Pineapple & Yuzu made w/ Motueka Hops, 0%. The taproom is a vibrant space with a light and bright Scandinavian aesthetic and lots of artwork on the walls that the brand has commissioned over the years - giving that brew tap zone a little more class than usual. It also welcomes children until 8pm. Opening hours are Mon-Weds: 3-10pm, Thurs-Sat: 12-10pm and Sun: 12-6pm. 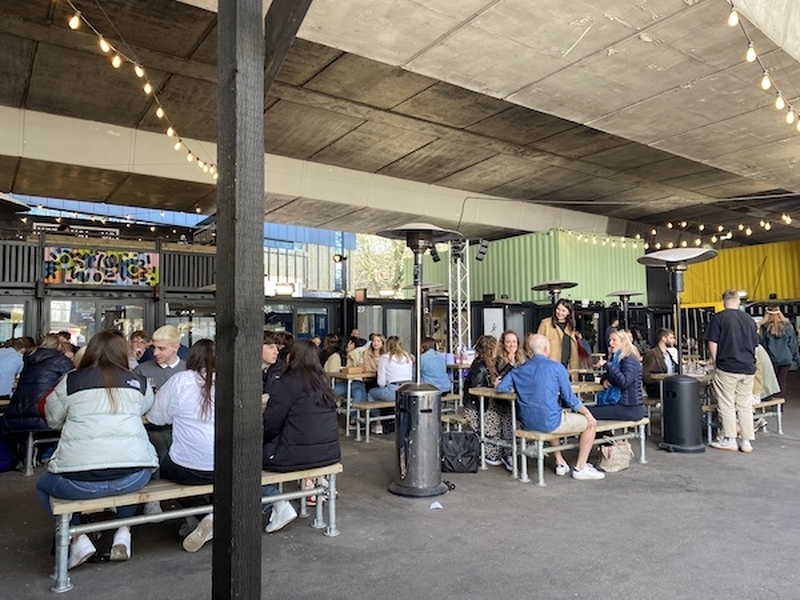 ÖL is a chic, nifty little award-winning nano-brewery from the people behind coffee shop TAKK located in shipping container food, drink and shopping spot Hatch on Oxford Road. There are eight taps serving an ever-changing range of different styles including lagers, hazy pales, fruit sours and more. There's also a vast selection of bottles and cans to drink in or take out, and for the non-beer-drinkers, a decent natural wine selection.

ÖL takes pride in hosting other breweries, so don't be surprised to see a few guest taps from all over the show when you visit. Staff are really knowledgeable and are happy to recommend something good to try - there's also a staff picks section on the good eats app currently in use. There are plenty of food options around Hatch to soak up the booze and live music and other artsy events are hosted regularly. It's tiny, so there's limited space for bookings but a few tables are kept aside for walk-ins and you can sit anywhere in the Hatch metropolis if you're happy for your tap to tongue journey to be a few feet further. Hatch is open every day from midday (9am on Saturdays) until 11pm, later at weekends. 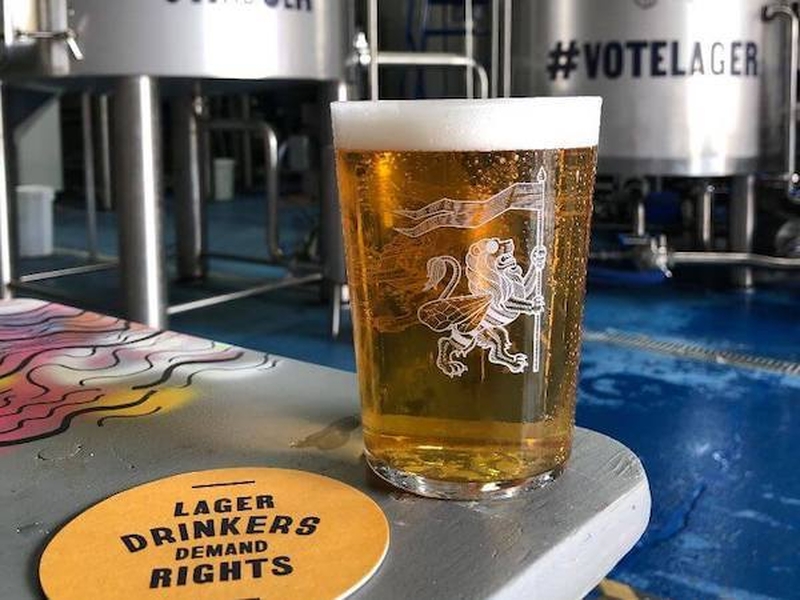 In craft beer, it's sometimes easy to forget about the classics. Drinkers can get swept away with too much choice, endlessly staring at the menu for the next hop-tastic beer to blow their minds. Consequently, lager often gets a bad reputation for not being exciting enough.

Well, Manchester Union is here to prove you wrong with Manchester's first and only dedicated craft lager brewery located in Ardwick. It has a 4.8% lager brewed using traditional central European methods down at their taproom and poured from its own hand-made side tap handles, imported from the Czech Republic. There is also the Manchester Union Black lager (4.5%) on offer if you want lager but different, and don't worry; there is a pale ale (4.5%) too for anyone that insists. The taproom is open on Saturdays from 12-8 pm for walk-ins only. 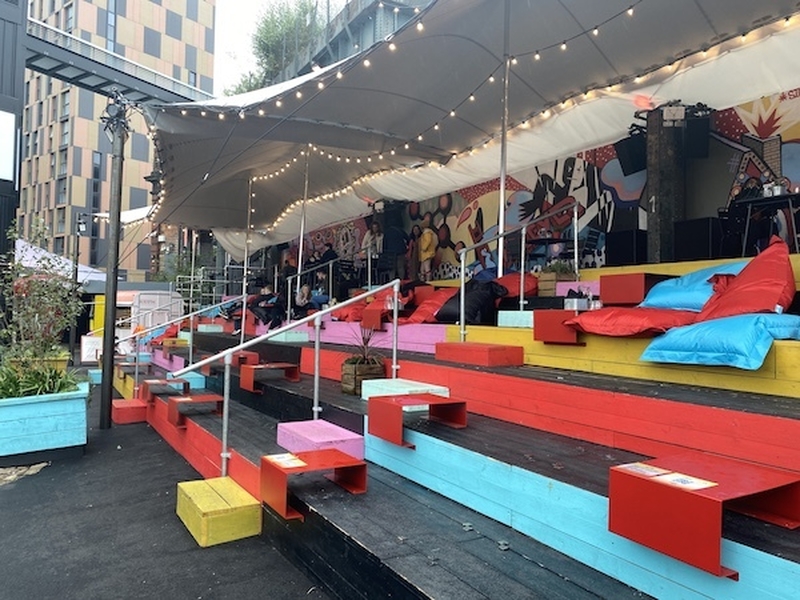 Salford-born Pomona Island has a new brew tap in the Engine Room at Freight Island in Mayfield Depot just a few minutes stumble from Piccadilly Station.

Only travelling a few miles from its Salford brewery, Pomona is pouring excellent beers at Freight including popular classic the soft and fruity 5.3% Phaedra pale ale. The new site is sheltered and heated, so it's a great place to check out some interesting craft beer alongside the dynamic street food vendors that Freight Island has to offer, including 22-inch pizzas from Voodoo Rays and authentic Vietnamese dishes from Mi & Pho. There are a wide range of styles to taste, including double-dry hopped IPA's and west coasts. Also, all of Pomona's beers are vegan. Bookings are available on Freight Island's website. Freight Island is open Mon and Tues 4-11pm, Weds-Fri 3pm-12am and Sat and Sun 12pm-12am. 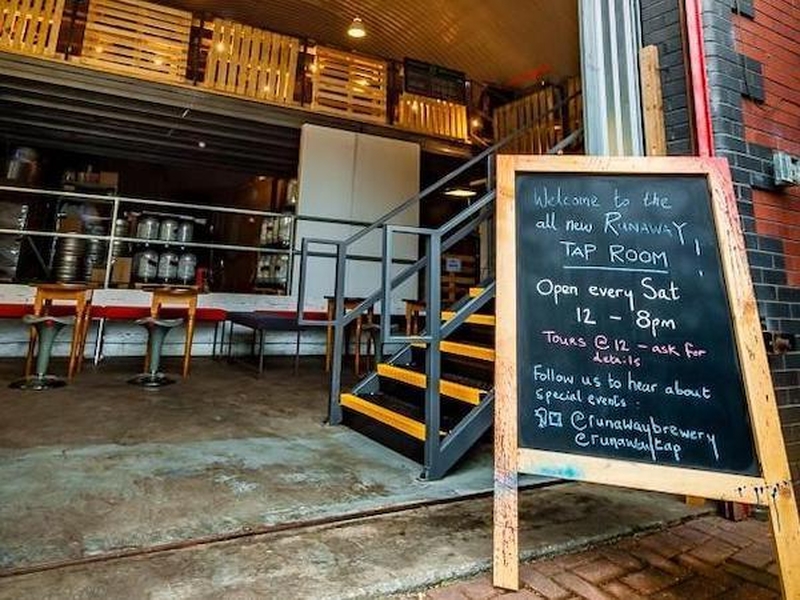 Runaway Brewery is an independently owned Manchester microbrewery that makes its beer by hand in small batches. It specialises in contemporary British beer, experimenting with hop-motivated pale ales and malty brown ales. There are three beers in Runaway's core range: a pale ale (4.7%), an IPA (5.5%) and an ESB (extra special bitter) beer (5.8%). There's also an assortment of specials and seasonal beers such as a seasonal gose and summer saison. At the time of writing Honest Crust pizza was providing the food - so expect something of an equally high standard if not them in future.

You can book a two-hour slot at a table in the beer garden. The taproom is currently open on Saturdays from 2pm-7:30pm. There's also an on-site bottle shop which is open 9-5 Monday-Friday. 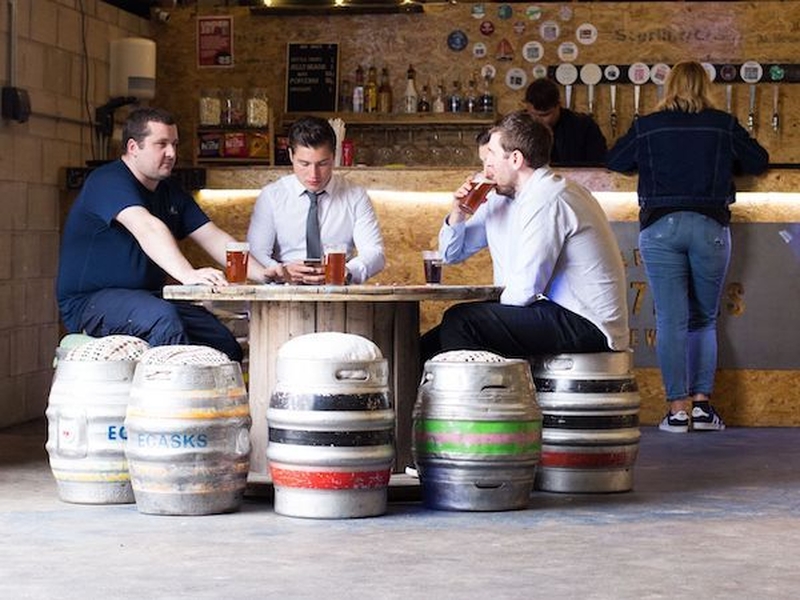 Salford's favourite septet of siblings Seven Bro7hers have several venues now, including a recently opened Media City bar, but it's the brewery tap that's the pick for those that want to be right at the source. The industrial-looking space has comfy (honest!) stools made from painted up old beer kegs as well as the almost standard chipboard bar area.

Read next: This charming can: Five of Manchester's best craft beers to drink at home

Read again: Bundobust 2 : 'We’ve always wanted to do some kind of brewery'

Fold, the bistro and bottle shop serving squid bolognese in Marple Bridge
What you say
Read Next
● / News & Comment