Sleuth: naked staff, clever graffiti and an interview with a road

Week 3: plus a man with a moustache sends a photo 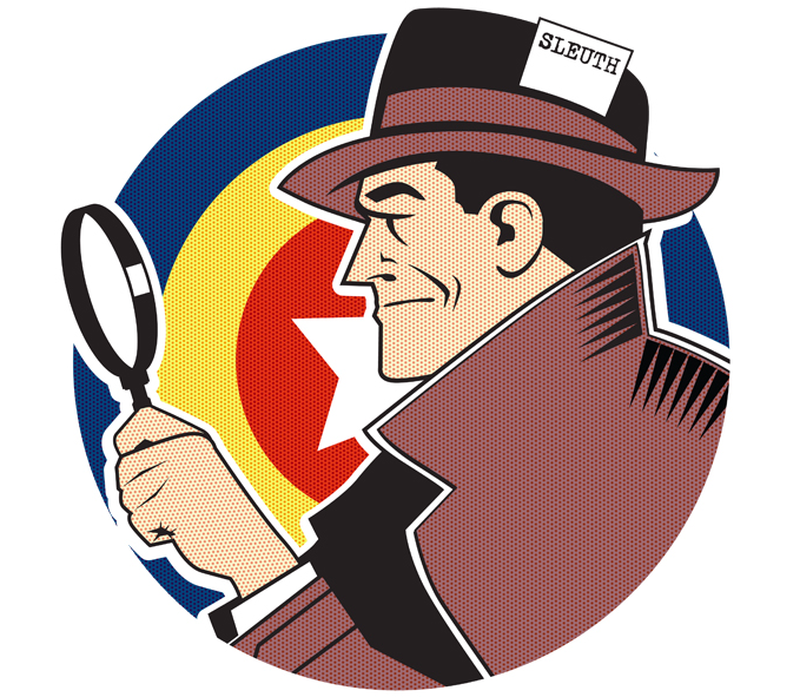 Posh up your caf' gaff

Sleuth is pleased to hear that Blackshaws Cafe is going well in Stockport marketplace since opening just before Christmas. The menu provides wonderful robust British food. The customer range is broad, including some of the older generation, one of whom recently asked the chef, James, “I love your grub but here’s some advice. Why don’t you put pictures of the food on the menu like they do in the posh restaurants in Blackpool?”

The bare cheek of it

There were some naked people outside Lush on Market Street on Friday. Apparently they were there to promote the store's new plastic-free packaging policy. According to Sleuth's colleague who attended the launch, all the naked people were real staff members who work in the shop.

"That's a serious level of commitment to the brand," said Sleuth's colleague, "and they must be bloody freezing."

"Well, at least they all had a good crack," said Sleuth, "but they've hit something of a bum note."

Sleuth sees plans for a 54-storey tower in the emerging St John's development has been scrapped. A spokesperson for developer Manchester Quays said the project "has unresolved development issues" including "interface issues between uses and sites that together have culminated in an uncertain programme"...

Sleuth reckons that might be property speak for "We ain't got enough bloody money."

This is such a clever piece of Manchester graffiti that Sleuth wants to make slogan t-shirts from it and become a sartorial millionaire, but in name only as he would give all the cash to charity for the research into one of the most pressing problems of our time: that devoted to relocating the sanity of MPs and the humility of Theresa May.

Sleuth was in Tatton Park Farm when he saw this food mountain. Fortunately he was with his best friends, Peter Rabbit, Bugs Bunny, The Velveteen Rabbit, Roger the Rabbit, Thumper, The White Rabbit and that frightening rabbit from Donnie Darko. It was really quite a party.

Sleuth was intrigued this week by the buffet breakfast offered by the new Motley bar and restaurant opening on Deansgate later this year. According to the menu on the website you can pick up a 'Morning Quickie' breakfast which involves grabbing a bag, filling it from the buffet, grabbing a tea or coffee and then heading off. Not a bad deal for £8 thinks Sleuth, especially if he's allowed to bring his own bag...

Sleuth’s sweet A-board of the week

Sleuth always smells of roses but this A-board on Oxford Street made him go and buy some. It sits outside the Principal Hotel advertising the Manchester Florist. Sadly it was back to real life after the purchase.

A man with a moustache and an absurdist take on life went to the launch party of Kai on Thursday. Sleuth couldn’t go because the editor-at-large, or whatever, Jonathan Schofield had written this review. Anyway the man with the moustache and an absurdist take on life likes to send Sleuth pictures of himself. He sent this with the caption, “I’ve got a new friend”. Sleuth, who as we all know is funnier than all the jokes Michael McIntyre has ever made and will ever make, responded with, “He looks shattered.”

Sleuth sees cocktail bar chain The Alchemist - which has sites in Spinningfields and MediaCityUk - is looking to add to their ranks and has posted a job advert this week for a 'Cocktail Development Jedi'.

Based in Manchester, the key responsibilities of the £27k to £32k position are to 'develop the cocktail menu', 'increase guest retention through offer and quality of experience' and 'bring peace and justice to the galaxy whilst increasing year-on-year cocktail sales by 2.5%'... they must also be able to bring force to the sauce.

Goes to this fella spotted on the CCTV of Northern Quarter barber RPB.

Here is another miraculous attempt by Sleuth to bring the oxygen of publicity to those without a voice, as he has with Beetham Tower, the statue of Friedrich Engels and a Gino D'Acampo bowl of pasta.

This week, following this article and this article, it’s time to ask punchy questions of Oxford Road's Traffic Regulation Fines.

Sleuth: How are feeling?

Sleuth: Do you think it’s ridiculous to have so many changes of designation on one stretch of road?

Sleuth: What do you think a person feels like when they are simply getting to hospital and they are hit by a fine?

Sleuth: Do the council care that they are hurting ill people financially who are just trying to get to hospital?

Sleuth: What do you earn?

Sleuth: That must make you the richest road in the UK. Are you happy with that?

Sleuth: What are your favourite songs?

Sleuth: And your favourite band?