Manchester to get biggest arena in Europe plus other property stories

Manchester property - The council approves huge arena, steps up on social housing while the battle of the arenas rumbles on. There's a predictable result with the Deansgate consultation, as well as new towers proposed and a weird decision over a cultural venue. It never stops.

Oak View's Arena in East Manchester given the OK

Council approval has been granted for a massive addition to Manchester's entertainment scene. This nod of the head for the controversial huge new arena with a capacity of 23,500, next to the Etihad stadium, seemed nailed on from the get-go. Every one who contemplated the proposal knew that was the direction of travel from the city council. The operator will be the US company Oak View Group. The city centre's AO Arena are appalled by the decision, see the story below.

For the record the new arena will have the largest capacity of any in Europe. It will cost around £350m to deliver.

This approval shows Manchester City Council has come out fighting after its singular lack of engagement with the BBC2 four-parter Manctopia (as noted in our review).

The council sent out the following message this week: ‘Proposals adding up to more than £1 billion of investment in Manchester are being considered'. These included the arena but also 634 new homes as part of the Northern Gateway on the northern edge of the city centre and 410 new homes in Varley Street in Miles Platting. After vague criticism in Manctopia and vicious attacks from local social media shouters about ‘gentrification’ the latter two schemes are all about putting down a marker.

Pictures of the new arena and how it might look

Here are three images of how the vast new entertainment complex could appear if the paradise called Planet CGI were real. The real question is what should we call the new arena? After this story here we think it should be called The Bradford Colliery Memorial Arena or 'The Pits' for short. Obviously. The Oak View Group's marketing team will love that.

We do social housing, see

Manchester City Council Leader Sir Richard Leese says this in regard to the potential investment: “The fact that these schemes are being brought forward represents a remarkable statement of confidence in Manchester at a time of major national economic uncertainty. That is important not just as a reassurance but as something which would translate into real jobs, real homes and real opportunities for Manchester people - helping to support the city’s economic recovery from the impacts of the Covid-19 pandemic.”

Apparently, and these are notional figures, the schemes could support ‘1,300 permanent jobs, 200 plus apprenticeships and thousands more construction industry and supply chain roles. Local labour agreements would ensure that many of these roles are specifically targeted at Manchester residents. Once completed it is anticipated that these schemes would generate more than £115m per year in extra spending within the local economy and add more than £6.5m a year in business rates and council tax income to help support services.’

More to the point the schemes include new affordable housing – ‘72 homes in the Miles Platting scheme (36 shared ownership and 36 affordable rent, to be managed by a registered social housing provider) and five per cent of properties within this phase of the Northern Gateway scheme. It should be noted that other parts of the Northern Gateway scheme have higher concentrations of affordable housing.’ Collyhurst Phase One has 130 out of 270 properties for social rent. It’s a start.

More about those Collyhurst houses

A consultation for the 270 properties proposed for Collyhurst ‘has begun with local people, businesses and groups before final plans for the first phase of new housing development in the neighbourhood are drawn up.’ Apparently local people have expressed a preference for a mix of ‘new homes, including accessible housing, family-friendly and age-friendly designs, alongside attractive residential streets, with a focus on safety and security.’ There will also be a new park. 28 homes will have to go under the scheme but nothing will be demolished until new places are available to move into. Let’s hope this scheme proceeds quickly, Collyhurst has been grotesquely underpopulated since slum clearances and industrial decline reduced the population by four-fifths.

As reported previously the newly named city centre AO Arena (née Manchester, MEN, NYNEX Arena) is furious about the prospect of an out of town rival in East Manchester from operator Oak View Group believing there is no business case for another massive Manchester venue and that the provision of one, away from a mainline rail link, cuts across all the city’s environmental policies. One of the AO Arena’s operating staff said to Place North West, “The existing arena is one of the most successful in the world. It is in the heart of the city and it is a huge institution in concerts worldwide and we need to protect its future.” The tide has turned against AO Arena though and the new East Manchester Arena, next to the Etihad, will go ahead - as confirmed above. Confidential is with the AO Arena in their concerns but believes that without the prospect of a powerful rival the refurbishment plans for the AO Arena might have been a long way off and the shabby welcome it presently delivers might have persisted. 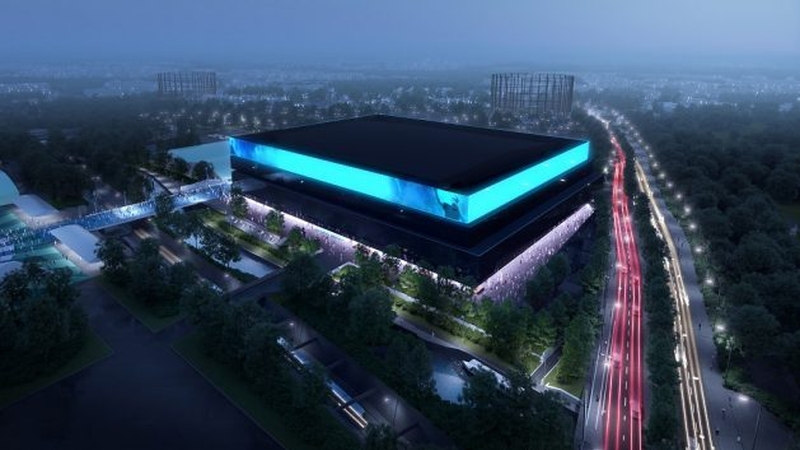 Ah the word ‘iconic’ on press releases…a go-to word meaning not so much iconic as familiar and probably quite big. The ‘iconic’ building of the week this week is The Midland Hotel, that fabulous architectural fantasia from 1903 designed by Charles Trubshaw for the Midland Railway Company. The £14m refurb affects all the bedrooms and public areas. The most obvious change will be in the hotel’s main foyer, which now features a new split-level bar built on a raised platform in the heart of the hotel’s lobby. The Midland’s food and beverage offering has also received a brand-new and the hotel will now be home to two new venues, Mount Street, is a modern British style brasserie, the Midland’s on-site restaurant, the Midland Lounge, where they will find an all-day menu serving classic dishes. Adam Reid’s The French stays thankfully. And thankfully the press release didn’t say those two most sickly of contact new wave phrases ‘reach out’.

Whenever Confidential mentions the Midland Hotel to anyone familiar with the city they know two facts. One is that Manchester-based Mr Rolls met London-based Mr Royce to form the Rolls Royce motor company there in 1904. That is true. The other fact is a total myth, namely that Hitler had ear-marked the Midland for Nazi use if the Germans had successfully invaded in WWII. However, the blitzing of Manchester was totally haphazard, hence the Free Trade Hall, presently the Edwardian Hotel, three doors down Peter Street, was destroyed. There’s no way German targeting was good enough to deliberately miss the Midland. I would personally like to ‘reach out’ and apologise to all those people who cherished that myth.

Proposed Skyscraper picture of the week

Hey, we couldn’t do a dip into property without a glossy tall residential tower image could we? It would be very wrong. This week it’s Far East Consortium’s proposals for the former Angelgate site on the other side of the railway from Angel Meadow Park on Dantzic Street. The scheme will be called Victoria Riverside because it’s close-ish to Victoria Station and stands close to the River Irk. There will be 634 residences (611 flats, 23 houses) across three towers, of 37, 26 and 18 storeys. The towers will be linked by podiums. Victoria Riverside is part of the Northern Gateway project which wants to bring on stream up to 15,000 homes in the next couple of decades.

Of course the Deansgate pedestrianisation will stay

In the least surprising news of the week the new Manchester City Centre Transport Strategy has decided the tidsy pedestrianisation scheme on Deansgate will stay – we said it would and we also suggested the Council might as well take it much further. Thus: ‘A key proposal is to formalise the current traffic-free trial along part of Deansgate, permanently making it a more attractive street for pedestrians, a move which would be subject to a separate consultation.’ We’ll probably look into the strategy in more detail in the next couple of weeks. Apparently, ‘The strategy’s central aim is for 90 per cent of all trips into the city centre to be made on foot, by cycle or using public transport before 2040.’ Ok, but access for businesses and for the disabled must be guaranteed too.

The courtroom drama on the Quays

Perhaps the strangest news about buildings for many a while came from Salford this week when it was announced the smaller theatre, the Quays, at the Lowry arts centre is to become a court. So, now in the mad Covid-19 world, a seat of culture will hear cases of a civil and criminal nature as well as hosting tribunals. Julia Fawcett, boss of the Lowry, thinks the ‘partnership will provide valuable funds’ to relaunch a cultural programme in the new year. Perhaps, but throughout much of British history courts sat in pubs across the country. Given the dire situation for these establishments maybe it would have been better to offer them a lifeline. A foolish thought maybe, but when we hear the lovable Salford Arms on Chapel Street has gone it just makes one sad. By the way, the Quays Theatre will be called the Nightingale Court, a sweet name which will belie its character and would have left the eponymous Florence very confused. 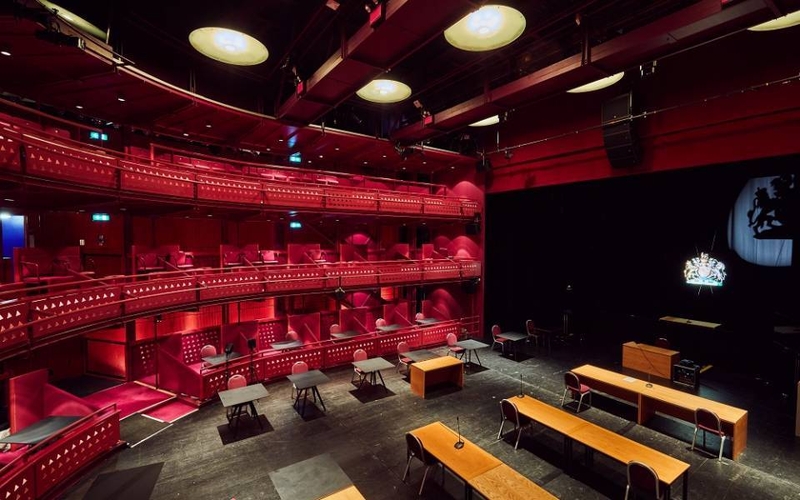 Dr Alice Roberts (biological anthropologist, television presenter) has been filming in Manchester this week for Britain’s Most Historic Cities on Channel 4. The main theme was radical Manchester and the progressive thought that flowed from the city particularly in the nineteenth century. One of the reasons for this, as Friedrich Engels (German communist, lived here for 22 years) noted, was a reaction to how substandard the accommodation for workers was and how the physical fabric of the city had been built too quickly. Many other observers noted this too. ‘Do you think we are getting it right this time?” said Roberts looking at the clusters of cranes over rising towers. Nobody had an answer. We won't have a clue for a long while.