A high line for Manchester? The Northern Gateway could make it happen

WE’VE dreamt it for years, but not many people expected it to land at the northern end of the city centre.

Bring on the trumpets, because Manchester is to get a high line at last: yes a proper high line, an elevated garden on a viaduct.

It’s more than a decade since Manchester Confidential first suggested the disused Castlefield viaduct as a good high line location. Now a much more viable viaduct has been found, although that’s not to say the Castlefield viaduct can’t get there in the end. The thing about the new location is that it might boost a plan to breathe life into a too frequently forgotten part of the city.

The viaduct in question is the Redbank viaduct of the Lancashire and Yorkshire Railway heading north out of Victoria Station. The initiative is part of a huge regeneration masterplan that will go to public consultation in August and September. This is called Northern Gateway and will cover 155 hectares (390 acres), the aim being to deliver ‘a mix of 15,000 new homes over the next fifteen years with 3,000 affordable homes.’

Northern Gateway covers the Irk Valley from the ridge at Cheetham Hill to the west and over Rochdale Road to the east, south to Angel Meadow and north almost to Queen’s Park. It takes in parts of Collyhurst, Miles Platting and other districts. For comparison, think of the whole area from the CIS Tower to Beetham Tower and from Deansgate to Portland Street.

The masterplan by Farrells looks very exciting. North of Victoria Station is much more interesting geographically than south of Deansgate Station. The Irk Valley has a proper topography, an up and down sweep of hill and vale. It is also ridiculously empty. Much of this area was laid to waste in the 1960s as the road to hell (Rochdale Road) was paved with the type of good intentions that look idiotic in hindsight.

The population of this part of the city was halved and then halved again as ill-advised slum clearances from doctrinaire town planners dreaming impossible dreams flattened whole areas. Of course the town planners never lived in the areas they had ruined.

The idea with Northern Gateway is to bring the people back and make the area function once more. This involves fronting up properties and activity onto Rochdale Road which presently is a deserted motorway-like strip bordered by pointless lawns. At the same time the infrastructure will be improved with a possible new Metrolink stop, new cycling routes and walkways, new housing and, best of all for the city generally, a new City River Park, knitting together existing green space and brownfield sites.

The latter will include a length of landscaped viaduct at the western edge of the site. That new high line will cover the distance from say the front of Marks & Spencer on Market Street to Victoria Station. When the viaduct garden ends it will link to a new park area on the site of the former St Catherine’s Church by the banks of the Irk and continue in a series of green leaps through a hugely improved Sandhills Park. The park will be enlivened by water, but thankfully not a fountain, with the re-exposing of the presently culverted stream that runs through it.

It’s a real opportunity to create something special almost from scratch.

One element of the green walk will then branch off towards a new Collyhurst Park while another will continue up the Irk Valley to Queens Park. It looks encouraging, although the green element could be bigger. Housing will occupy most of the former sidings of the Lancashire and Yorkshire Railway, an area that could, if there were the will and money, be turned into a really substantial park close to the city.

It also seems a shame that the presently green space up to Andrew McKeown’s Breaking the Mold sculpture will disappear under residential development. Those caveats aside the landscaping ideas are creative and clever and it’s good to see how the masterplan stresses the need for money to be in place to maintain the new green spaces.

The progress of higher rise buildings close to the city centre and lower rise as the distance up the valley increases is sensible and logical: although this is essentially what always traditionally took place naturally in towns and cities until those post-WWII experiments.

Northern Gateway isn’t all about the city council, the project has a partner, the property developer Far East Consortium (FEC). The whole shebang will begin with the latter’s MeadowSide development at Angel Meadow bringing 286 flats in the high rise developments of The Gate and The Stile followed by other towers delivering a total of 756 flats. The affordable homes, to quote, ‘will be kicked off by the delivery of 110 new homes for social rent subject to £10.25 million of Government funding.’

It’s good to see the excellent Manchester company HMG paints will remain, as a reminder of when this area was an industrial heartland, but for the high line to work it will be necessary to tackle some of the filth in the commercial shanty town immediately west in Cheetham Hill.

Councillor Suzanne Richards, Executive Member for Housing and Regeneration, said: “The Northern Gateway is central to the city’s strategy to build truly affordable new homes that meet local people’s needs. The city needs 25,000 homes over the next decade and this project aims to contribute to this target, delivering 15,000 homes in the next ten to twenty years. The area has so many advantages - it’s close to the City Centre and the work and leisure opportunities that brings and has great transport links to elsewhere in the city region.”

FEC Project Director Tom Fenton said: “With the Irk River Valley acting as the primary catalyst for change, Northern Gateway will unlock the development potential of 390 acres by creating vibrant communities of family homes, parks, schools, healthcare and other public facilities, all linked by new parks and public realm around a network of integrated public transport provision.”

Taking redevelopment north from the city centre in a coherent and cogent manner is necessary. Manchester for too long has been a lop-sided city with investment drawn to the south. This might start to correct that while at the same time opening up the attractive nature of the Irk Valley. It’s a real opportunity to create something special almost from scratch.

And then there’s the highline development. As with a big indoor Arena, a dockside development and a cat cafe it’s something which every credible city seems to require.

For the fascinating backstory of this part of the city read our 2014 story: The Impossible Bridge and the Improbable Hill: the Irk Valley tour.

The full report can be found in the Economy Scrutiny meetings on the city council's website here. You can see more of the plans below. 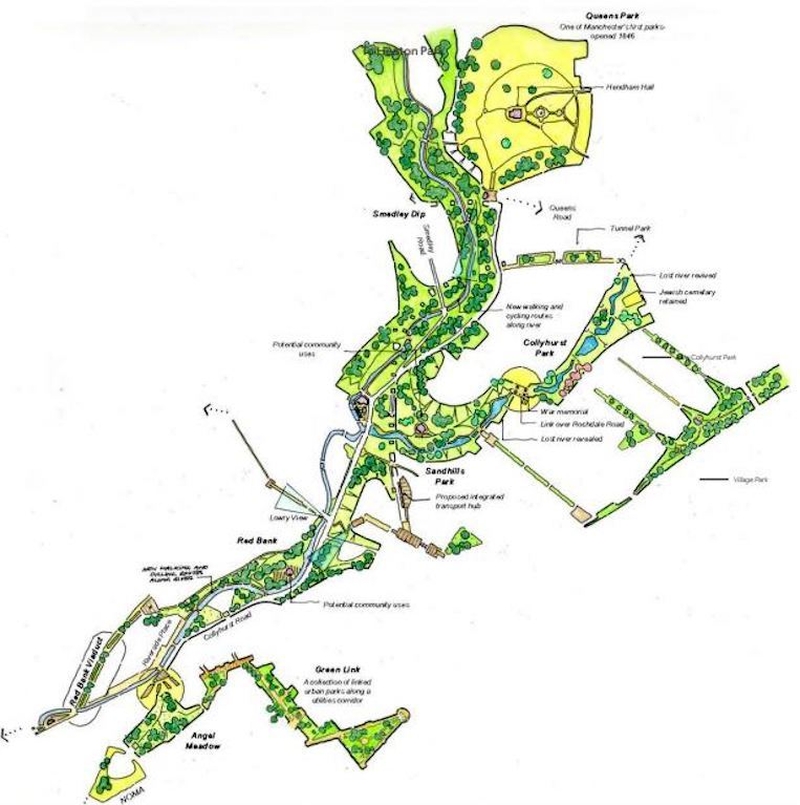 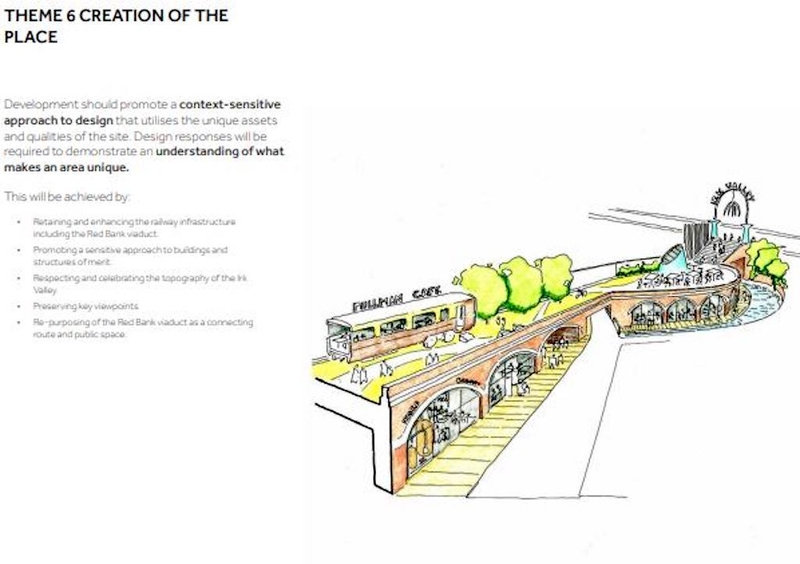 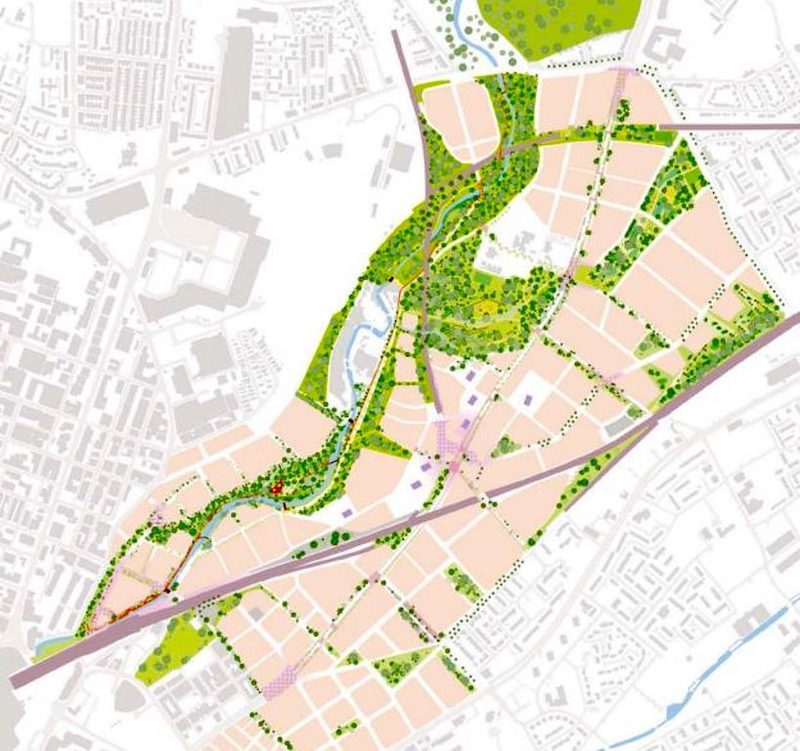 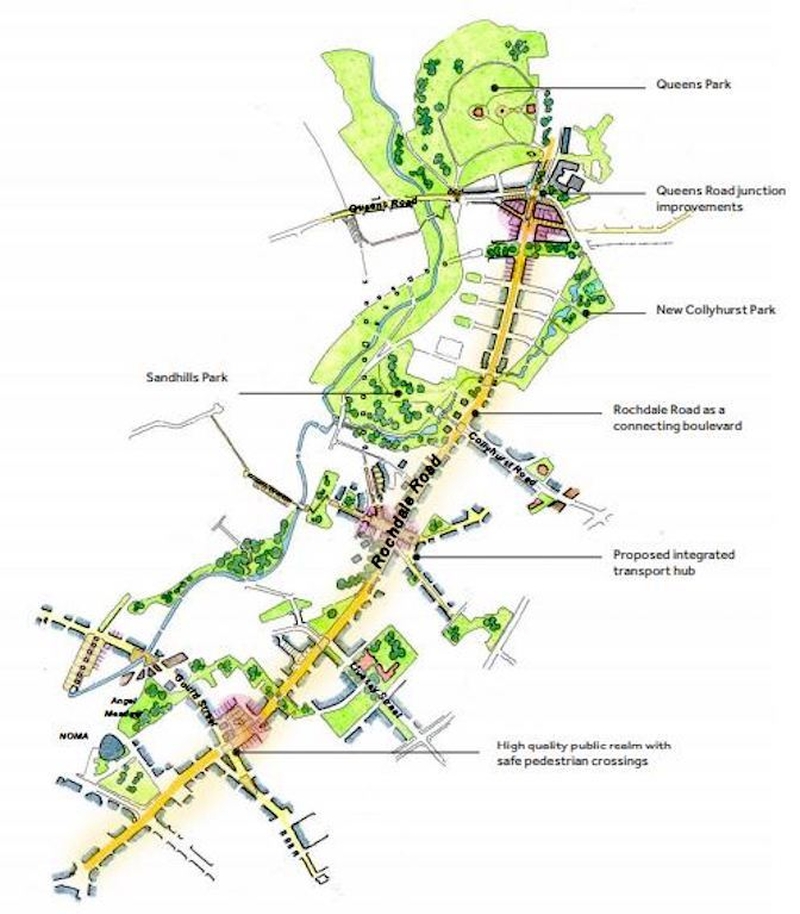 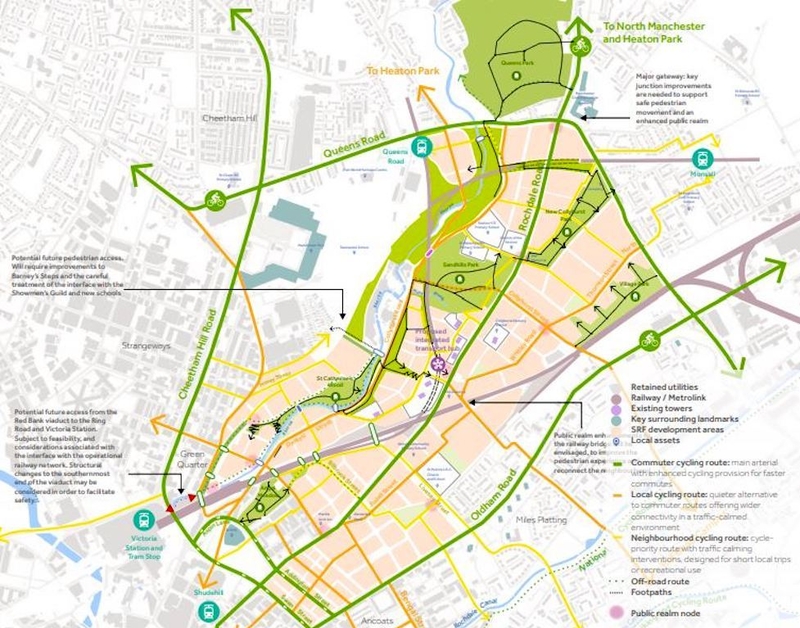 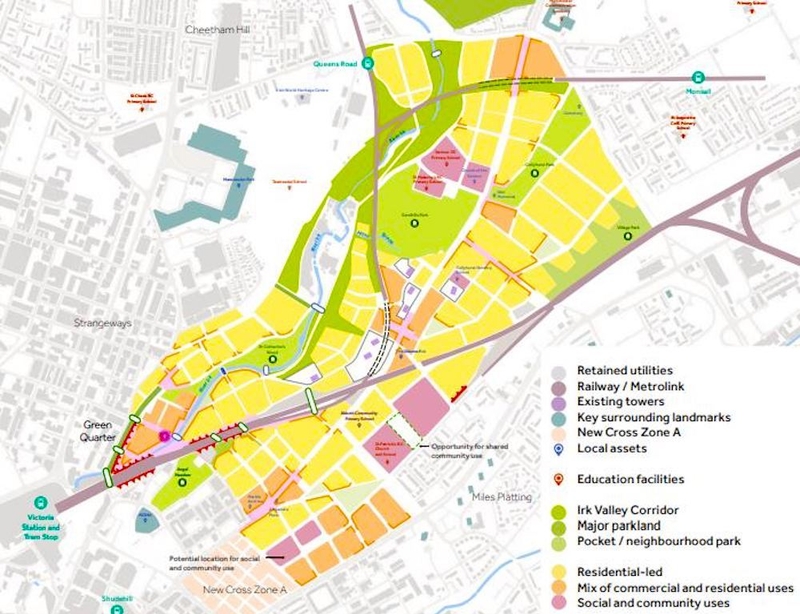