It’s been less than a month since our last new openings article and already we’ve been swamped with fresh additions to Manchester and the surrounding ‘burbs.

It's all very eclectic too. There are cricket-themed bars, vegan takeaways and self-described revolutionary dining experiences on the way, not to mention a cool Thai barbecue and more video games. All in time for June’s end-of-the-rainbow lift on indoor restrictions.

Here is our round-up of what's opening in Manchester's bar and restaurant scene in June and beyond.

The heads and shoulders behind 3 Hands Deli are adding a finger to another pie with a new dining room in the empty unit between Siam Smiles and Lions Den over on the burgeoning Deansgate Mews. Another Hand will champion “produce-driven, minimal intervention, grower-to-chef-to-plate” cooking by Chef Julian Pizer, formerly of Cottonopolis and The Edinburgh Castle in Ancoats which was one of our best restaurant reviews in Manchester in 2019.

At least one of the hands has been teasing us with images of produce from Cinderwood Market Garden in Cheshire which currently supplies a handful of Manchester’s favourite restaurants with its organic veg. 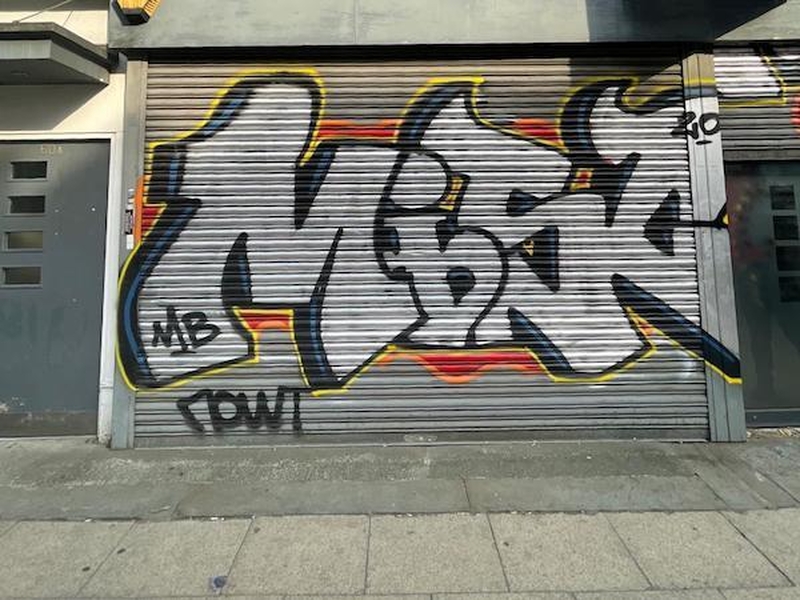 Be kind, rewind to the simpler times of the 90s with this VHS-inspired bar from the folks at Chakalaka. Currently starting to take shape behind the shutters of the former Toni & Guy academy on Oldham Street, Blockbuster will feature everything that you loved about the blue and yellow entertainment store. The decor, cocktails and even beer snacks will be themed around the much-missed vanguard of video rental. More details to be teased soon but this is one we’re setting our timers for.

Get your blowtorches out, a new-wave Thai restaurant and bar has arrived on Oldham Street. From the heads behind Tokyo Ramen, District will serve “progressive barbecue cookery” and “liquid intelligence” which to you and me means exciting futuristic Thai barbecue and drinks (or "liquids" as they’re referred to on the menu). Visitors can expect two set menus, all of which include ingredients that have “touched the barbecue”.

Head Chef Ben Humphreys is well travelled across the Manchester Pan-Asian scene with previous roles at Australasia, Tattu and Rabbit In The Moon. Upmarket experimental dishes reflect this, including local hogget belly with nam prik pao, shrimp floss and kale as well as pork coppa with tamarind jeaw. One to watch. 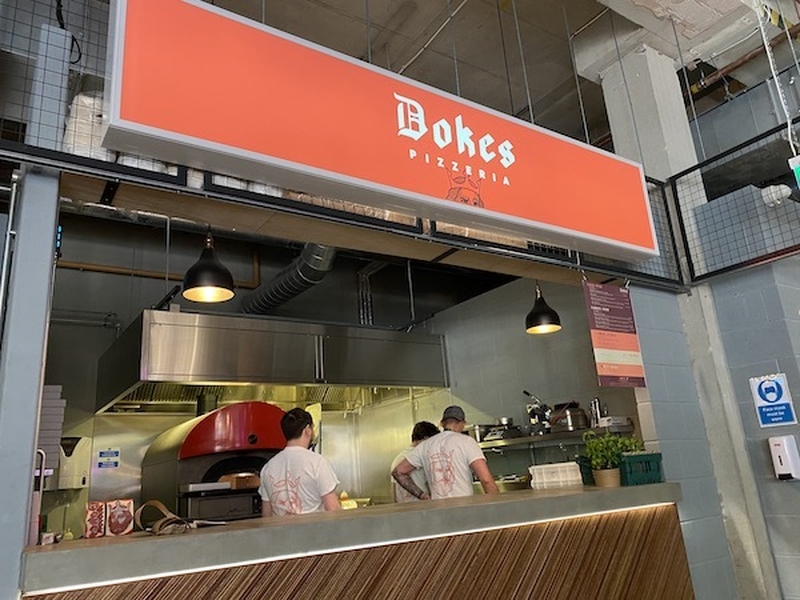 Michael Clay’s Elnecot was one of the first really good restaurants to take a chance on the almost-derelict Ancoats. We all know how well that gamble played out. Now Clay’s got himself a namesake oven and started doing pizza. More pizza? You might say? Yeah but we checked out Dokes over at Society near Bridgewater Hall and you can tell it’s made by the kind of chef who put disco cabbage, sexy greens and crab crumpets on Manchester's dining map.

Divided into white ones (with no tomato sauce) and red ones (with), these self-styled "Anglo-Saxon pizzas" are topped with locally sourced treats like Trealy Farm air-dried duck breast, British burrata and Owd Yonner cheese - we've tried them and they really are very good indeed. Dokes is now opening a standalone venue in what used to be Basil & Lily in Prestwich. 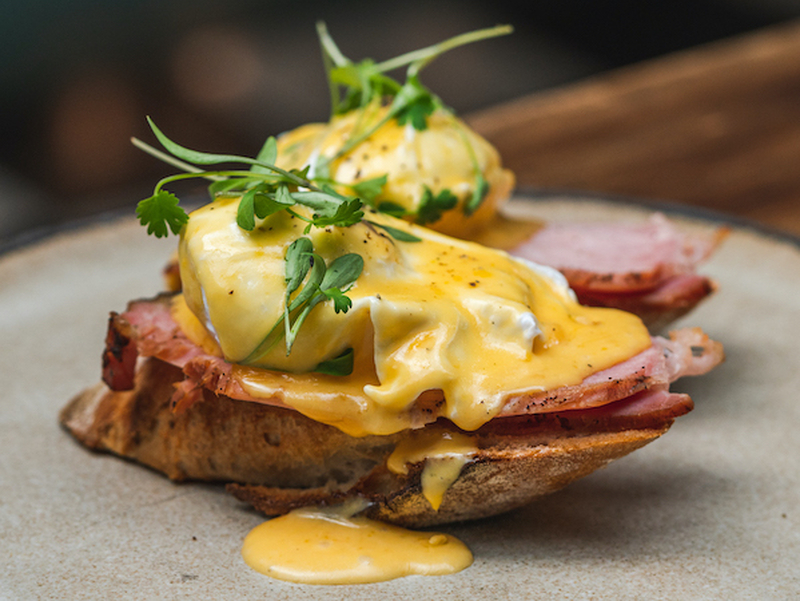 Taking up a sleek space at the bottom of futuristic high-rise living concept Moda, Barton Arcade coffee champ Pot Kettle Black launches its second location next month at Angel Gardens. In keeping with Moda’s "everything in one place", Insta-life aspirational mega-tower vibe, Pot Kettle Black will cater to the block and surrounding area’s coffee and brunch needs. An idea endlessly better than a Nespresso machine in each flat.

Also in keeping with Moda’s emphasis on social living, the new PKB will host events including book clubs, coffee workshops and a specially crafted cocktail menu. Favourites from the OG Barton Arcade menu include maple-cured eggs Benedict (pictured), brioche French toast and just basically all the pastries we can stuff in our faces.

Following in the footsteps of hands-on sports bars like Flight Club and Whistle Punks Axe Throwing, London-based Sixes will bring its gastropub complete with cricket nets to Manchester this month - the first location north of London (or King’s Cross if you want to be specific). The nets, bookable by the hour, will give customers of all abilities the chance to face off against Fastbat cricket simulators.

Food and drink will team a distinctly Home Counties gastropub (pavilion, even) menu - think prawn cocktail, cider-steamed mussels and hog roast - with signature cricket-themed cocktails like the Basil Smash and Silly Midoff Punch as well as non-alcoholic options so you can stay on top of your game. Sixes will be moving into the former Alston Bar & Beef site in the Corn Exchange.

Yet another newbie for Deansgate Mews, this one comes from Braddan Quayle, the man behind Alvarium in the Northern Quarter. In quite the departure from the NQ bar's vegan offering, The Mews is going to be a "bar and charcuterie" with cheese plates courtesy of The Crafty Cheese Man. There will be a seasonal selection of cocktails, beer and wine, with "British tapas" small plates in the pipeline too. 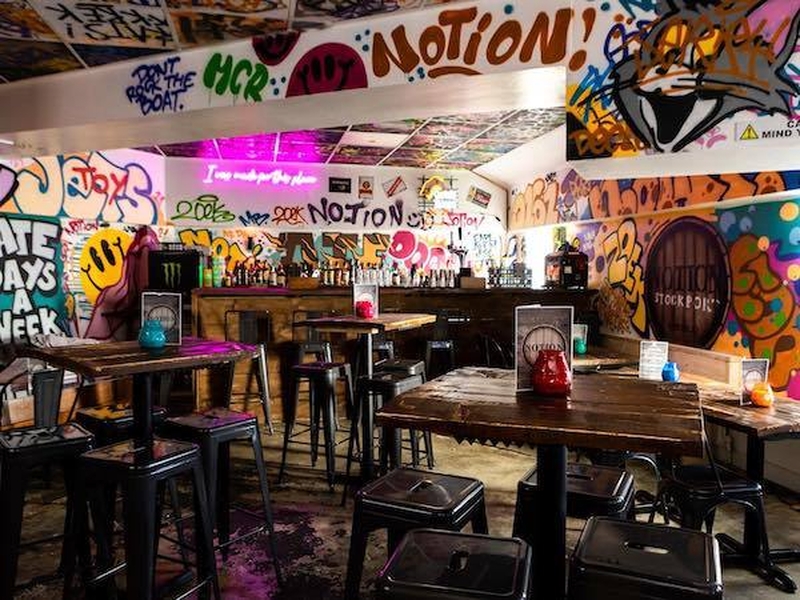 Notion is "Stockport's only dive bar" from the folk behind butty bar Ate Days A Week. With graffiti-covered walls and toilet doors adorned with images of the heads of Boris Johnson and Margaret Thatcher on spits, the desired demographic is pretty clear. In case of any doubt, see Notion's social media strapline: "no bookings, no influencers, no tories".

Open until 2am at the weekend and playing a mix of old-school pop, country rock bangers and stadium ballads, industry staff will welcome this new late-night addition - as will anyone who likes a colourful cocktail, a dirty burger or a 50p chicken wing. 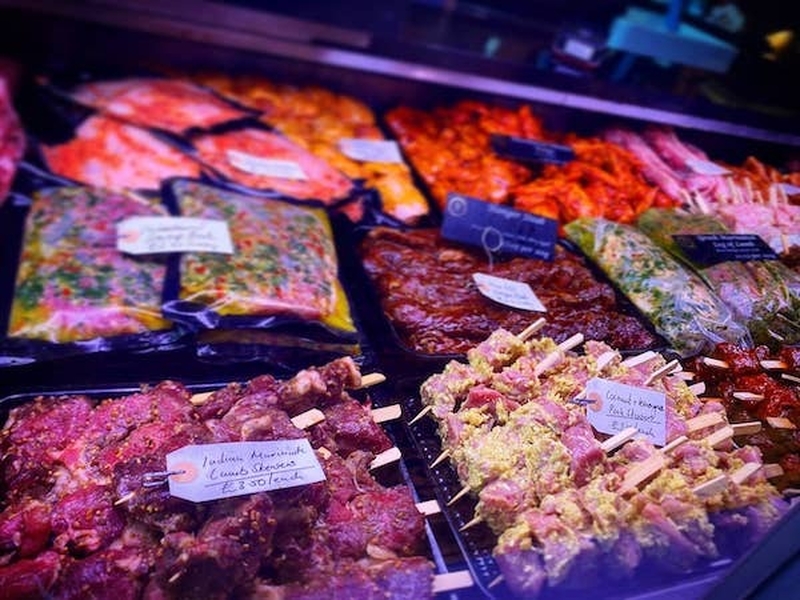 What: The Butcher’s Quarter

A second outpost of the beloved NQ butchers is coming to Deansgate Mews. Championing artisan suppliers, The Butcher’s Quarter deals in free-range grass-fed lamb and beef, supporting farms within a 20-mile radius in Cheshire and Lancashire as well as British suppliers further afield.

Wine is courtesy of Didsbury oenophiles Reserve, the on-site "tasting room" providing a relaxed space for customers to sample a glass or two while nibbling on a bit of charcuterie. It will also be a setting for tasting sessions and master classes. A handful of dainty tables on the terrace will be a good shout to soak up some sunshine. 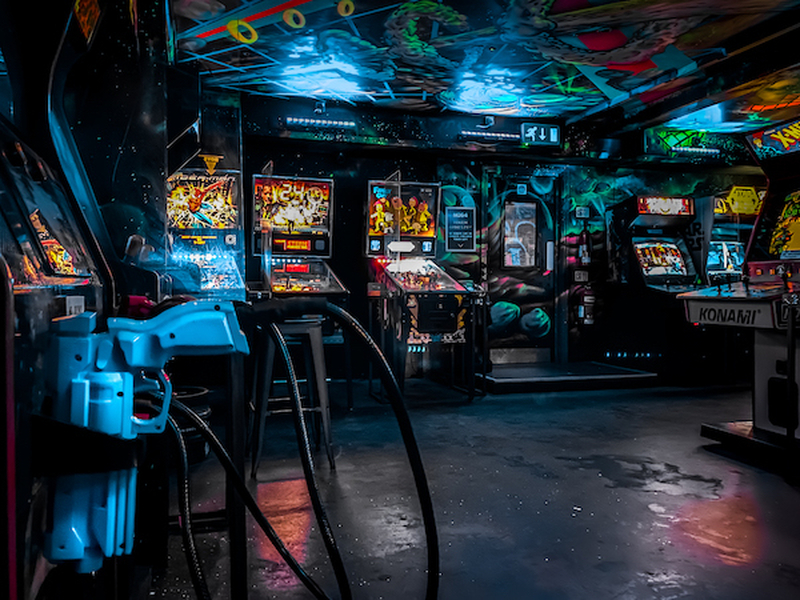 If you’ve yearned for simpler times whilst getting upstaged by Monster energy-fuelled teens playing Call of Duty online over the last year, get yourself down to the new NQ64 on Peter Street. The retro gaming bar’s second Manchester space will be packing more free to play Playstations, Game Cubes, N64s and Super Nintendos than the Argos catalogue, alongside trademark retro arcade machines like Pacman, Time Crisis 2 and new additions like Mario Cart and NBA Jam.

There’ll also be plenty of gaming fuel to consume (and by fuel we mean old-school crisps) and cocktails inspired by video game characters. Princess Peach, anyone? Get there early on launch night for the chance of free drinks and limited-edition merch. 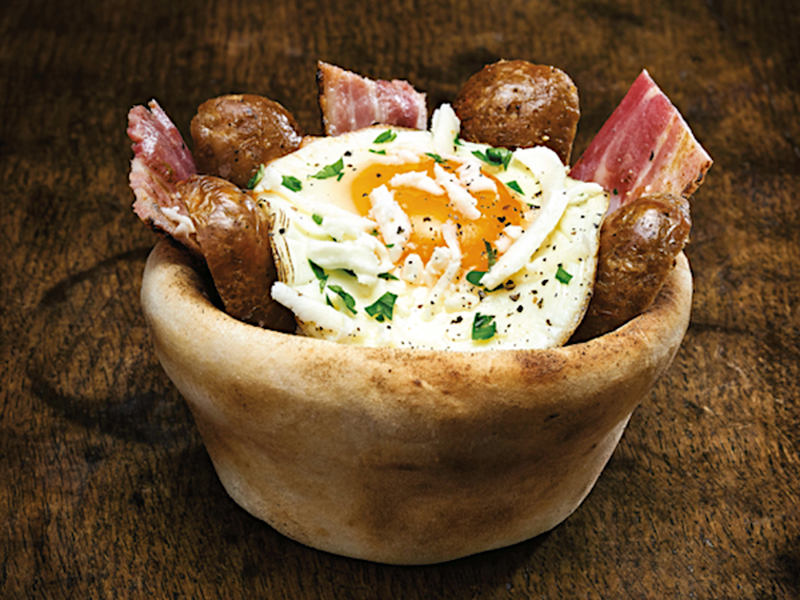 Do you know what Manchester needs? More pizza. With Ramona, Four Side, American Pies, the aforementioned Dokes, Purezza, Prato Neoclassical and more all recently opened and the city already home to everything from Croma to Pedros to Rudy's, Manchester is crusty AF. So any newcomers need a USP, which for Pizza Luxe is breakfast pizza. This gaff does a full English pizza and a choice of standard or veggie "breakfast bowls" which are created by smooshing pizza dough into a bowl shape and filled with your favourite brekkie ingredients. That should set you up for a day of shopping.

We’re just going to say it: there are mixed messages coming out of Rendition. On one hand, Deansgate’s latest “premium” modern British restaurant and bar is going to be overseen by executive chef Arthur Potts Dawson. A former head chef of London’s River Café, chef advocate at the World Food Programme, and all-round food waste and sustainable farming activist, he sounds like a good 'un.

On the other hand, the PR surrounding the place is a bingo card of hyperbole: “an aspirational restaurant the likes that Manchester has never seen before”, an "ingredient-focused" menu (is there any other kind?), Manchester's "newest and most exclusive". Over on their Insta, a chef is captioned as "smooth and indulgent yet punchily flavourful". We'll let you know what we make of the food when we visit for a review soon. Read more about Rendition Manchester here. 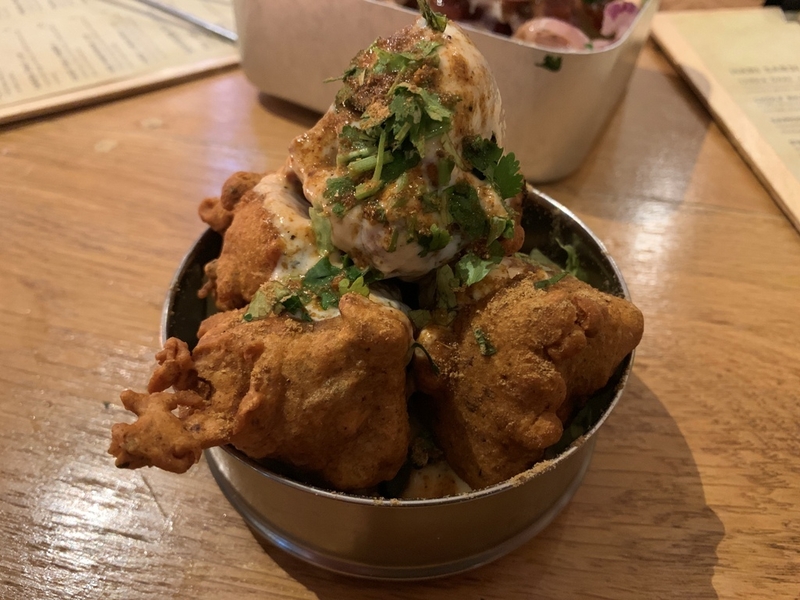 Home of Irn Bru cocktails and haggis samosas, Roti somehow blends elements of Scottish and Indian cuisines and actually makes it work. Having been going strong in Chorlton (which gained praise from our own reviewer Jonathan Schofield), the empire is now expanding to other happening suburbs with slightly cheaper house prices. Sale’s revamped Stanley Square is next on the hit list but the team has a few more irons in the fire too. We’ll have the full scoop on the new Sale restaurant soon. 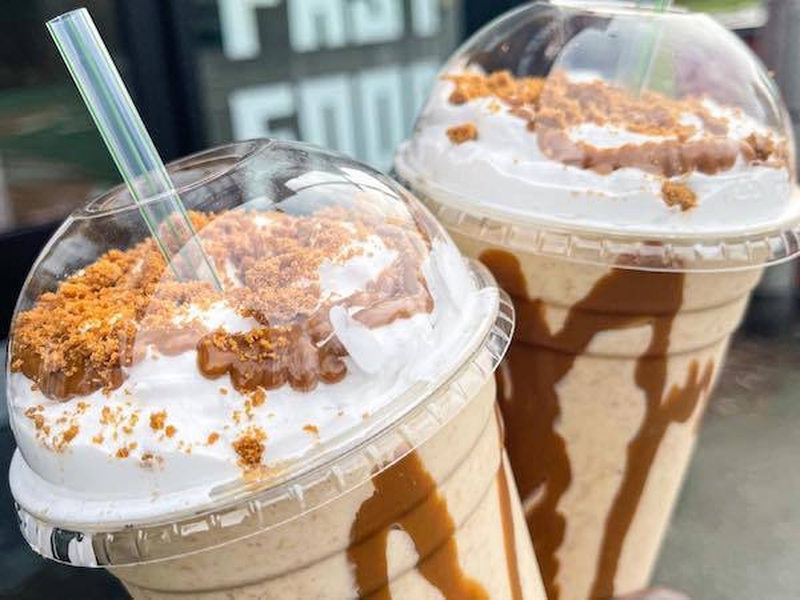 Like your fast food with a little less existential guilt? Vegan Shack is fast food made from 100% plants and a lot of it looks like your favourite guilt-laden high street faves. With its burger chain aesthetics and large vegan menu, the shack has been a hit since launching for delivery in Collyhurst in 2019. The new site in Piccadilly Gardens is coming for your commute cravings.

Ideally situated for a burger on the train or nugs on the bus (both of the chick’n variety), the site on the edges of Piccadilly Gardens will be a welcome spot to sit and veg out. Swap your Big Mac for the Big Shack and your Chicken Selects for Peri Tenders. You’ll feel better in no time.

From the team behind Club Liv comes a boujie new bar called Yours. Aimed squarely at the pouting selfie brigade, this high heels and haute couture hot spot features a graffitied corridor set to be a ‘gram sensation - in more ways than one? The sushi and sashimi on the menu is equally photogenic and there's a Faberge Egg roulette with sweet miso truffles and one hidden "chilli surprise" on the dessert menu. Drinks are firmly in the cocktails and champers camp.

Read again: New bars, restaurants and cafes opening May 2021 and beyond