In 2019 the juggernaut of clean eating shows no sign of abating. In this vein, Foodwell is a deeply Instagrammable, new multi-purpose space just over the river from the People’s History Museum (a certain sense of irony there) that is based around the wellness lifestyle.

I couldn’t call it unpleasant, because that would be assigning it more predicates than it actually merits

Apart from its good looks, there is something essentially confusing about Foodwell. As I’m waiting for my table I’m brought a menu for hot drinks, cocktails and wines, but no smoothie-type things, which is what I expected.

A matcha latte (£3) gets me in the mood (it tasted like creamy pond water and stains my lips green). I see people drinking pressed juices, but have no idea how they got them. All around us people are eating lovely looking breakfasts, but when I ask the waiter how they got hold of them he looks vague and says ‘the brunch menu must have finished’.

We get the Sunday lunch menu instead and notice that, for a clean-eating place there seems to be plenty of meat, including surely the least clean food on the planet, bacon. For balance, we order mains from the vegan ‘plannt’ menu instead, and have starters from the Sunday small plates menu.

Most of my ‘clean-eating’ friends don’t seem to have a problem with having a drink - despite alcohol being a demonstrable toxin that can actually kill you, unlike say, white flour. Foodwell’s drinks menu promises it will “align with my moral principles” so I order lychee mimosa (£6) and a build-your-own bloody Mary (£8.50). My morals stay intact and I don’t die, so we are doing pretty well for a Sunday.

Pulled ras el hanout lamb (£9) is a winner and the buffalo cauliflower (£6) similarly good. I don’t know if something deep-fried can technically count as ‘clean eating’ but it certainly improves the flavour. “I used to eat KFC,” confided our waitress, “but now I eat this instead.” I don’t blame her.

‘Plannt charcuterie’ (£16) is as mysterious as any encounter I’ve ever had with food. For once I wouldn’t have minded if our server had done that annoying thing where they explain everything on the plate, because this time I was genuinely baffled. With a copy of the menu to refer to and a CSI-level commitment to reconstruction, I now feel confident enough to name at least some of the offenders in this plant-based crime scene.

The orange blocks are harrisacheese (all one word) which is fine - if you like vegan cheese. The Ryvita-looking thing, snuggled between bowls of beetroot hummus and sweet tomato chutney, is a ‘linseed shard’. The worrying dark grey bread is toasted sourdough (actually very nice) while the stuff that looks like strips of woodchip wallpaper goes ominously unnamed. My dining partner declares it ‘the worst thing I’ve ever eaten’.

Two dried-out pellets arrive, presumably to make up for the lack of jackfruit meatballs and tomato and olive paté. Unless these two gelid blobs quivering timidly behind the bowls of dip are meant to be either of those things. It’s an enigma. An enigma that costs £16 and represents all your dad’s worst fears about veganism come true.

The Indian Balti burger (£15) is better – the dryness of the shitake mushroom patty balanced out by avocado – and comes served on a black bun that I presume has charcoal in it (though God knows what that is meant to achieve). The ‘balti’ flavouring is a bit lost. The artichoke chips are undercooked.

For pudding we decide to split the vegan cheesecake (£7) which looked pretty and came with a smashing mango sorbet and ‘honeycomb’ toffee. The cheesecake itself was two blocks of nothingness - a base layer and then a layer of vegan cheese. Texturally, there was no way to differentiate the two. I couldn’t call it unpleasant, because that would be assigning it more predicates than it actually merits.

I ask the waiter how they had achieved a ‘clean’ version of ‘honeycomb’ (the use of quotation marks starting to spiral out of control) but he looks vague and suggests it's just regular honeycomb toffee made from golden syrup. It seems a bit counterintuitive to go to the bother of making a ‘healthy’ cheesecake and then sprinkle it with the inside of a Crunchie.

The staff, who had been super-attentive and unfailingly lovely, suddenly seemed to lose interest in us. From being asked five times how the food was, it then took ages to get someone to remove our plates and give us the dessert menu. Getting the bill took a similarly long time.

When we finally do get the bill, I ask the waiter about the 99p add-on for carbon-free dining. There's absolutely no vagueness this time as he passionately informs us about planting trees in Tanzania. Well he certainly has me convinced. though I'm less sure about the 12.5% service charge (I’d rather give a cash tip).

The fact that the least ‘clean’ parts of Foodwell’s menu also happen to be the most tasty seems to indicate that we might not be having our superfood plant-based cake and eating it just yet, but I suppose there is hope for the future. 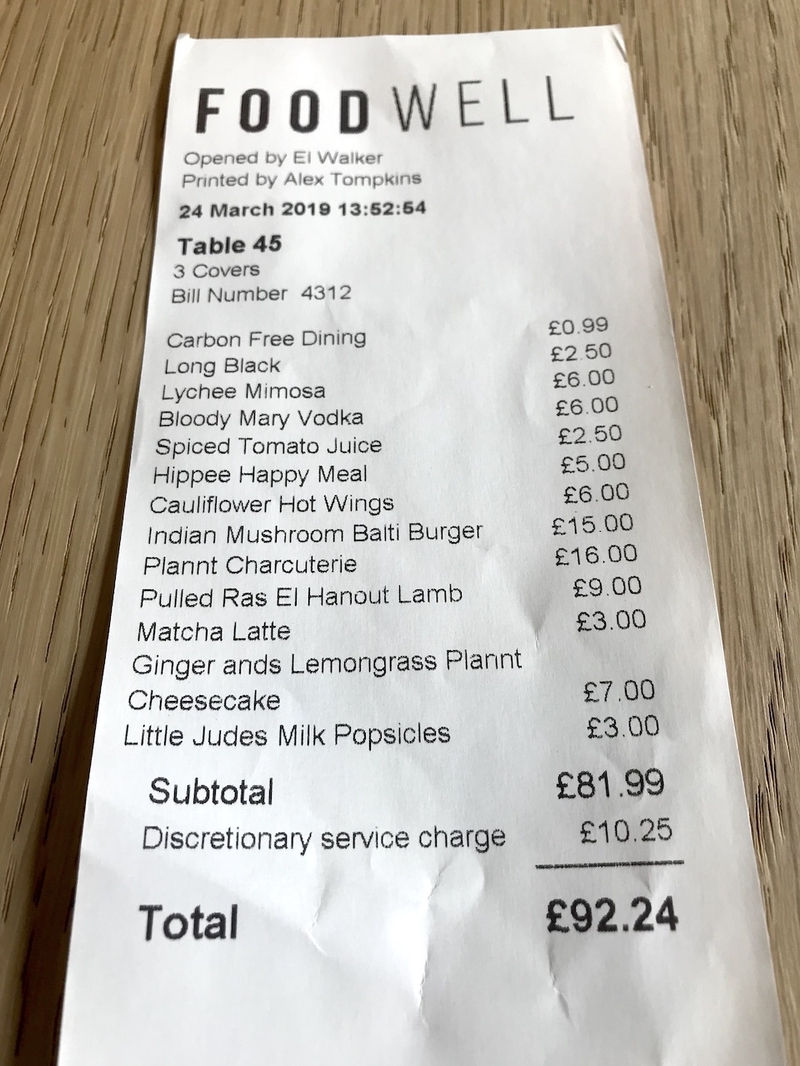