“Not just any pizzas. Exotica on a dough base” – Opium, Deansgate, reviewed

Jonathan Schofield has a remarkable meal, but not in that way

BY the end of the meal at Opium I felt drugged. This was a restaurant experience where Laurel and Hardy music seemed to be playing somewhere at a sub-conscious level. It was dining as slapstick and it gave me perverse enjoyment.

Opium is a pizzeria on Deansgate with a terrace in Great Northern Square. It is small with black fittings under a splendid brick arch. The online menu promised mains other than pizzas but not so in the actualité where it was just pizzas. But not just any pizzas, oh no; ostrich, wagyu, quail and camel pizzas. Exotica on a dough base although not much emphasis on ‘locally sourced’. Maybe the other mains come out at night.

First we ordered a bottle of the Orvieto wine, a perfect hot day summer white. The waitress brought it and battled to open it, then started to pour, at which point I started to pay attention saying, “That’s not an Orvieto, that’s the Verdicchio." “Is it? Oh it is,” said the young woman, “I’ll get the Orvieto, really sorry.” “Don’t worry about it,” I said. She returned and said, “We don’t have any Orvieto.” “In that case,” I said, “we’ll have that Verdicchio rather than you wasting it.” Generous to a fault. She poured some wine and then tried to put the cork back in the bottle as though a student party had finished and she wanted to keep the wine in the fridge for the following day.

Meanwhile to our side there was a tussle with a big terrace parasol. The manager and a member of staff were opening one for some new customers when it got stuck and suddenly a man on another table was wearing part of the parasol edge as a fringe. Eventually with the help of a pole they won the day.

The waitress came back and asked for our order. We went for the wagyu and the camel pizza. “We only serve them in the evening,” she said. “It’s a pizza topping, I don’t understand,” I said (breaking all reviewing rules simply because there was nothing as interesting on the menu.) “Truth is, I’m going to write about Opium and it’d be a shame to miss on the specials.” “I’ll ask,” she said and then presumably resigned and left the building, the city, the country, because we never saw her again.

After a while we asked the man in the tie, who was clearly the manager, whether we could have the speciality pizzas and he said yes without hesitation. Then the kitchen hesitated for around forty five minutes.

Still, there was plenty of entertainment. Trevor, the boss of a large group at Opium, started to give a speech to his assembled colleagues of around ten people (I’m not sure if his name was really Trevor but he looked like one). He started to thank his people for how hard they had worked when, just at that moment, the staff started to clear the table very loudly, picking up the plates and destroying Trevor’s moment forever, even pulling a plate from under his chin as he reached a crescendo of emotion over teamwork.

Our pizzas arrived. The camel (£18) had meat so over cooked that even if I ate camel every day I wouldn’t have been able to tell if this was the real deal. Meanwhile the wagyu steak (£18) on the other pizza was even more over cooked, more like chewy biltong from southern Africa, than light as butter wagyu. It was biltong smothered in balsamic as well.

On both pizzas the amount of beast, camel or steak, was insufficient by any measure to justify £18. Camels and moo-cows are big things. You can make a lot of Opium pizzas with one of them. That freezer in the kitchen will prove it's worth.

That’s not to say the bases and the cheese and tomato toppings weren’t very good. It’s also not to say there aren’t other pizzas. Under the ‘Traditional Pizzas’ there are old faves such as four seasons, and margheritas, but then the menu goes mad with ‘schwarma’, ‘Indian pollo’ and ‘Arabica’. I suspect this isn’t an Italian-owned pizzeria.

The place reminded me of the magnificently monikered Augustus Welby Northmore Pugin’s criticism of the confusing mix of styles at St Mary’s (The Hidden Gem) church not far away. He said of the architects of the 1848 building: “It shows to what depth of error even good men will fall when they go whoring after strange styles.” Quite.

I could beef more about the wagyu, get the hump over the camel and put my head in the sands over the ostrich, but that seems unnecessary. In fact I’m not really sure how to judge Opium at all, it seemed it was having the perfect storm of restaurant disasters in one afternoon. Mind you, I’m still worried about that first waitress. Where did she go?

I sat a little longer when my guest had left, proof-reading in the sun. I asked for a lovely chilled glass of Pinot Grigio. It came back at a temperature in which you’d soak soiled socks. “Have you got any real opium?” I asked. In my head. 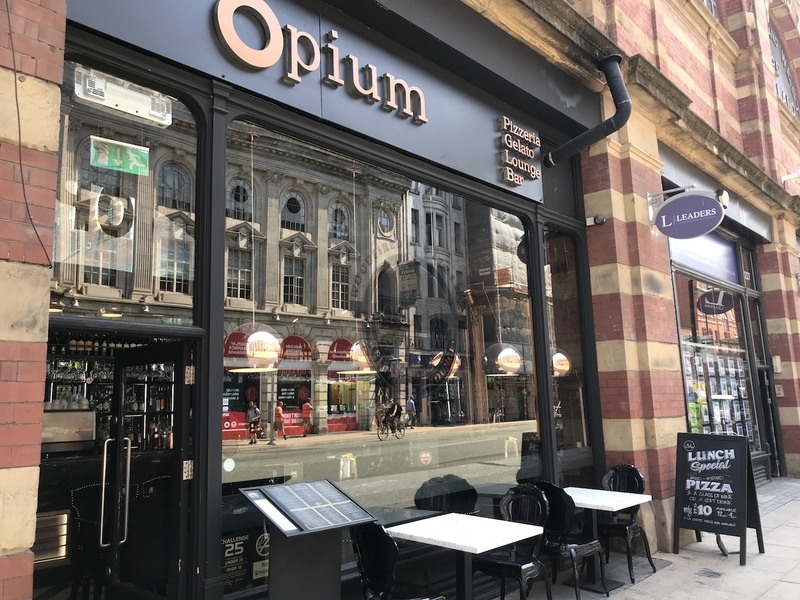