THE TIMES’ restaurant critic and scourge of Manchester, Giles Coren, recently suggested that instead of obsessing over ‘clean eating’, following diets invented ‘by morons for morons’ and lining the pockets of wealthy posh-girl bloggers, all we really need to stay healthy is to follow a few simple rules: ‘don’t eat anything out of a packet, don’t eat in front of a screen and don’t eat anything delivered to your door by a man on a bike’.

Well, because he works for a newspaper group which stiffs small bistro owners, we’re going to ignore old Gilesy and spend one-day eating only food delivered to the office via a man (or woman), as we stage the ultimate takeaway app face-off.

Following the very recent Manchester launch of UberEats from the world-conquering taxi giant, Deliveroo’s continued takeover of our roads, and, er, Jinn (that other one you see sometimes), we thought it about time we downloaded the apps and pit them against each other in a lunchtime game of delivery wars.

We had all three bring two dishes each - a burger and an Asian noodle soup - to our city centre office at Old Granada Studios. Our guidelines involved choosing similar types of food to be delivered and measuring them against each other in terms of how easy it was to place an order; presentation and temperature of food on arrival; price and how long the order took to arrive (compared with what they promised).

Here's how they fared:

Launched in the UK’s capital city last year, UberEATS operates in a similar way to Uber’s taxi service, allowing customers to place their order on an app and watch it arrive in real-time via a live map. UberEats launched over here last week choosing Manchester as its second UK city to deliver restaurant-standard dishes to homes and offices.

A fleet of bike couriers deliver meals across the city centre and suburbs, including Didsbury and Chorlton. They currently have 65 local restaurants listed on their app, with plans to expand further over the next few months. Couriers aim to get food to customers’ doors in 30 minutes for a flat delivery charge. There’s no minimum order value.

Launched in the UK’s capital city last year, UberEATS operates in a similar way to Uber’s taxi service, allowing customers to place their order on an app and watch it arrive in real-time via a live map. UberEats launched over here last week choosing Manchester as its second UK city to deliver restaurant-standard dishes to homes and offices.

A fleet of bike couriers deliver meals across the city centre and suburbs, including Didsbury and Chorlton. They currently have 65 local restaurants listed on their app, with plans to expand further over the next few months. Couriers aim to get food to customers’ doors in 30 minutes for a flat delivery charge. There’s no minimum order value. 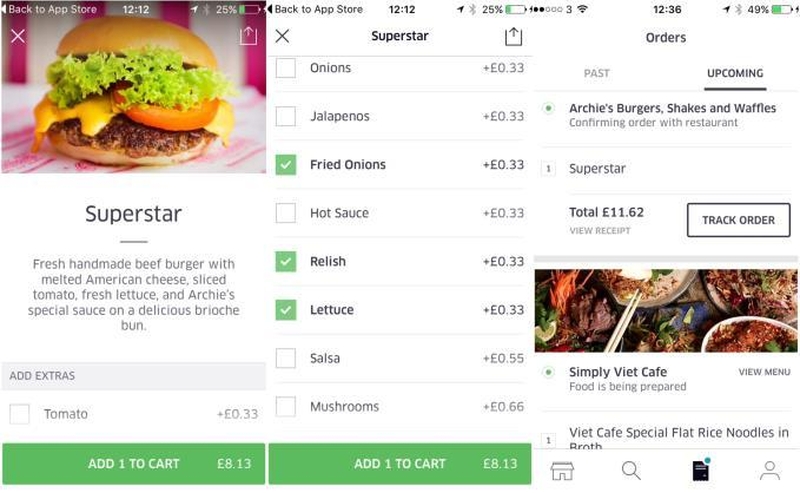 Condition: The food arrived intact and well stacked in three polystyrene trays. The broth was surprisingly hot, accompanied by two separate boxes; one containing noodles and meat plus another containing fresh herbs, beansprouts and chillies. The portion was large and good value for money, though the packaging was too small to act as a bowl, so we had to borrow one. No cutlery, chopsticks or napkin provided.

Condition: Arriving tightly wrapped in paper, the burger looked flat, unappetising and a bit sorry for itself. Archie's was the only outlet of the three to not include fries, which for £11.62 seems a bit of a rip-off. Particularly when almost half an hour late. Still, this ain't the deliverer's fault, he was as chipper as a squirrel in the KP Nut factory.

Pros: The app already had my card details because of my Uber taxi account, which saved any messing around manually entering bank details. I was surprised to see they already had so many outlets on board, despite launching only last week, as well as a few boozy drop-offs. As with Uber taxis, you can track the drivers progress on a visual map and receive notifications along the way. The whole experience is as slick as, well, ordering an Uber.

Cons: Despite the number of restaurants there were only 3 Asian (including Indian) options available at lunchtime, one of which went offline halfway through my order. You’re unable to add orders from different places into the same cart, meaning you have to go through the payment process twice (but this is the same with all three apps).

Arguably the most well-known food delivery app thanks to an aggressive rollout, much publicity about their questionable HR practices and the way Manchester’s citizens have learnt how not to get run over by Delivery youths on BMX’s. Deliveroo has the most Manchester restaurants listed at 114, with a wide range of cuisines and deliver to more suburbs than the other apps.

Condition: Very slick and well thought out packaging from the restaurant. Shoryu Ramen branded carrier bag and tub with soup base in the bottom and the pork, noodles, egg and other additions presented beautifully, packed in a plastic tub which fitted snugly into the top of it. All delicious, but soup not particularly hot.

Condition: Burger arrived in a box which had tipped over on its side during transportation, but the burger was intact and looked fine. Cooked medium. Came with decent chips in a separate box. Still hot.

Pros: easy to order, easy to pay – I just used touch ID on my iPhone. Driver phoned me when he arrived. All food ordered by Deliveroo was first past the post.

Cons: Soup not very hot on arrival. As with other apps, I had to make two separate orders for two separate restaurants and pay two delivery charges. You have to remember to allow push notifications. I accidentally had them turned off so had to check in to app to see where we were up to, but it did keep me up to date with my order. No driver’s names given.

The same-hour ‘shop on your behalf’ delivery app, Jinn doesn’t just limit itself to restaurant food delivery, it allows you to order and receive anything from supermarkets and high street retail stores including fresh fruit and vegetables, cosmetics, groceries, clothes and electronics, straight to your door. The startup is now apparently seeing 50,000 monthly orders via its app in Central London just two years after launch. Jinn is also available in Manchester, Birmingham, Leeds, Edinburgh, Glasgow, Madrid and Barcelona. They currently have 39 local restaurants listed on their app.

Condition: Very nicely presented. Three tubs in total; Pho branded tub of soup base with one. There was a generous portion, which was still hot on arrival. No different to restaurant quality. Came with chopsticks, napkin and fork.

Delivered: 13.28 (there was a 10 minute delay as no drivers were available)

Condition: Burger arrived flattened and unappetising. Bun soft yet squashed. Cooked medium to well done, the bacon was burned and hard, cheese and bbq sauce couldn’t salvage it (they noted on order that salad does not travel well). It arrived with mediocre, lukewarm chips which had a bendy cardboard texture. No way near value for money.

Pros:  App is easy to navigate and user-friendly. You can track your rider’s movements through the app. Driver’s names and numbers are given up front so you are able to contact them by text or call. All payments are handled safely through the site and secured by Stripe, so you can scan your card or enter your details manually.

Cons: No push notifications, you have to check into the app to see where your order is up to. You can only order from one restaurant at a time. There was a 10-minute delay with one of the orders, as no drivers were available. We subsequently discovered that you can’t order from the Jinn App again until you have rated the last delivery out of a possible 5 stars – but that only took seconds.

Deliveroo won this particular experiment because all the food arrived first and in tip top condition - although we liked the interactive map on the Uber App and think that Jinn’s more versatile delivery options are the way forward. (L'Oreal's already been clothes shopping on there - see here). All three delivery apps worked well with no major delays, mishaps or problems, but buying food this way works out pretty pricey – we’re saving it for emergency hangovers in future.

Who's still delivering food and booze in Greater Manchester?
● / Drink 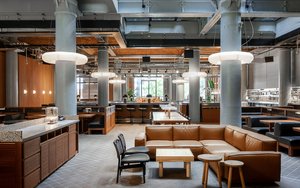 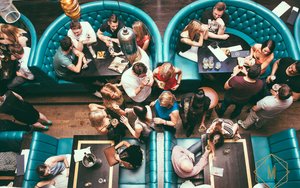 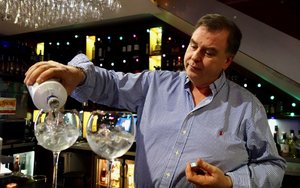