WELL, it’s nearly half way through the year. What that means is shortly, the nights are going to start drawing in, and pretty soon we’ll all be bombarded with Christmas.

It’s a great restaurant to walk into; the stairs into the basement make you feel like you are walking down the red carpet at Cannes; the whole place is light, airy, comfortable and special.

I'm sorry to bring it up but remember all the foodie fuss last autumn about whether or not Simon Rogan at the French was going to get a Michelin star? People also spoke about Aiden Byrne, at Manchester House - was he going to get one? A bit silly that, as he was far too late with his opening to feature.

Many a chef argued at the time that Michelin isn’t important, saying they aren’t really interested in Michelin glory and it’s all about pleasing the customers. 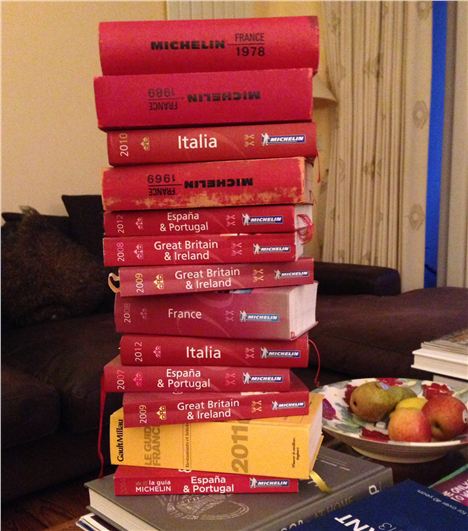 Michelin towering above the chef world

All you chefs, to a man, and a good few women these days, would offer your daughters to the devil for just one itsy-bitsy star. Grannie and the rest of the family would be packed off for three of the little buggers.

France, last year, had 28 three star establishments. Great Britain and Ireland had four. It seems the French, whose cuisine is currently out of favour here in the UK, are still way ahead of us.

The point is this. It’s only three months away until the guide is published again. Gordo doesn’t want to talk about the worthiness of either The French or Manchester House for a star. We all want it to happen.

It would be proper icing on the cake. Great for Manchester and the region. But Michelin got Gordo thinking having had meals at some of the Manchester bridesmaid restaurants.

We should remember that Australasia, 63 Degrees, Aumbry, Michael Caines at Abode and Grenache have all upped their game recently. So, it’s time to start looking at them. 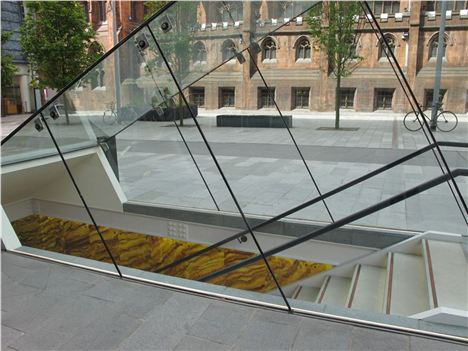 We’ll begin with Australasia, still one of Gordo’s favourite places to go for a ‘civilian’. That means, just for fun.

It never fired on all four cylinders after the first chef buggered off two weeks after opening, making Gordo look a bigger twat than normal for scoring it impossibly high in those first two weeks.

Dave Spanner moved in some months ago. This is a seriously good chef, worthy of stardom with the right place and backing. Gordo thought that this would be an interesting move for him.

The Fat One visited with Stephen Miles, GM of the Edwardian Radisson, for a catch up. It finished up with the booze catching up with both of them and after an historic 14-hour session, Gordo could remember little of the second half of the meal.

Back at Gordo Towers, Gordo did his usual trick of leaving his trousers in the lift. Don’t ask. 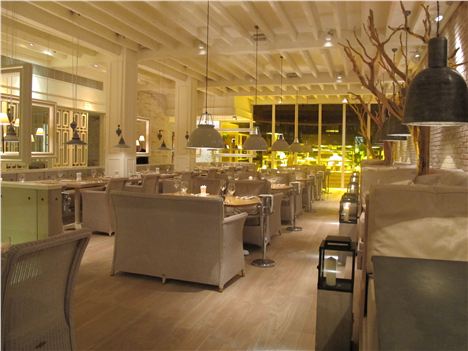 So, he went for a second try last week drinking cucumber water. This is good stuff if you want to stay off the sauce.

Gordo did this time but he knows the wine list off pat and to be honest, it needs a revamp. It’s all about a fiver too expensive and more choice is required, particularly with the whites.

The ‘Pan Asian Fusion’ food here has many sticky, sweet sauces. To match the food more French and German varieties of white wine needs are needed. These have more personality than the New World wines and would match the food better.

Chef Spanner has been doing some fine-tuning. The Japanese fishy stuff is now top drawer. Spanner is great with fish; he seems to be in his element. He is aided by the sheer numbers of diners giving him buying power; they probably get through more seafood than any other place in Manchester and turnover is key to fishy freshness and fishy freshness is key to quality on the plate. A virtuous circle that the brigade takes full advantage of, delivering ever better quality. And, so it goes. 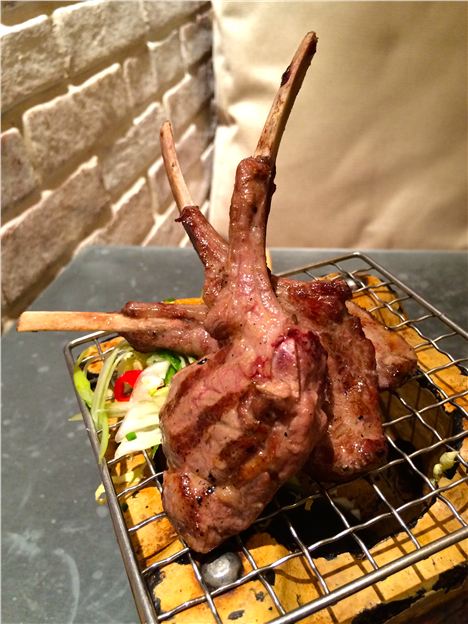 The smoked eel Nigiri sushi (£9.50) looked dynamite and was. They get the rice as near perfect as it can be here in the UK, and then marry it with the smoked eel, tied in a ribbon with a tiny dollop of mayo. May not be mayo, but it may as well be mayo. An utterly beautiful big fat mouthful it is. In the past sashimi has been wanting; but as said, recent lunches have delivered ever more pleasing plates of yellow fish tuna and Loch Duart salmon.

The menu, as ever, is mixed up between starters and small plates to share, along with some chunkier main courses. Everyone should choose a couple of dishes, then share; Gordo wouldn’t have tried the eel if he hadn’t done this and it’s now one of his all time favourites.

That infused water by the way is £3.50 for a great big jug of the stuff.

The selection of these Japanese staples is always good, prices are about right for the quality; never eat cheap with this stuff, it’s not worth it.

Squid and fresh lime tempura (£8.50) is outstanding. The tempura batter is light and crunchy, infused with fresh lime juice that lifts the squid itself to new heights. Clever stuff this and a great portion. Szechuan salt and pepper beef skewers (£9.00) are tender, juicy and highly spiced; both Gordo and Mr Miles were bowled over with these. 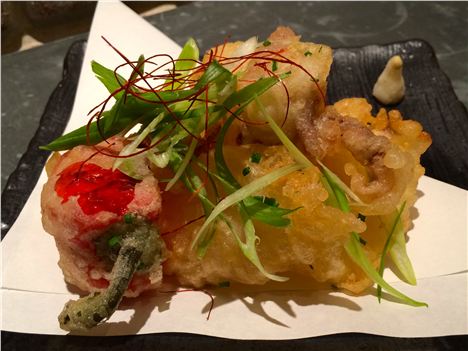 On the small plates, black cod roasted in hoba leaf (£22.50) is as good as Nobu. Pork wonton (£7.50) looked good but missed the mark; they were soft at the base and needed a bit more spicing to lift the ingredients. A visit a while ago included beetroot salad with goat’s cheese bonbons (£8.50) which was a knock out salad. 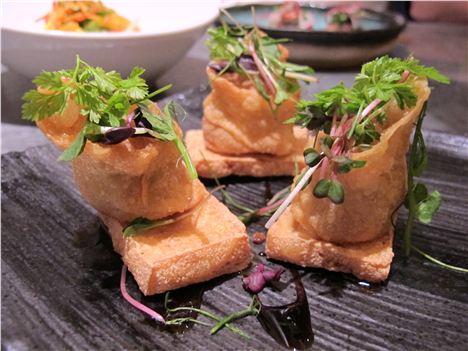 The lamb chops with soured cabbage (£13) are spectacular, brilliantly flavored in the Moroccan style.  Sliced beef fillet with sweet soy and spring onion didn’t need the dipping sauce; it was of such quality the beef sang on its own accord, with just the juices tickled by spring onion and masterful seasoning. 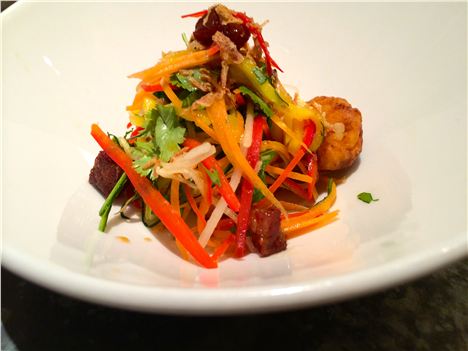 The ‘must have’ dessert was passion fruit soufflé with pistachio ice-cream and coconut sauce (£7.50). It’s a two star Michelin knockout.

From the big plates old favourite crispy suckling pork belly with a pineapple curry (£15.50) did its usual job of putting a smile on everyone’s face.

By the way, there are 27 dishes that are suitable for vegetarians.

Service is extremely good, if a little over the top sometimes. The old timers are the best, having realised that Gordo doesn’t need to be asked every five minutes if he is enjoying himself. Service also knows the product well and has balanced opinions on what they like, not just what Chef wants them to sell. 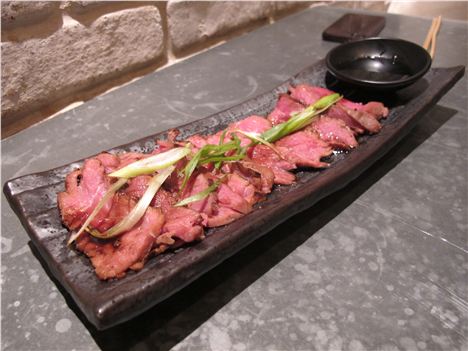 It’s a great restaurant to walk into; the stairs into the basement make you feel like you are walking down the red carpet at Cannes; the whole place is light, airy, comfortable and special. The lighting makes the place feel like its spring in Singapore all the time.

Michelin star? No, but this is definitely an occasion you will enjoy every bit as much as any current starred place in the North West, and it isn’t stuck firmly up it’s own arse.

Tim Bacon, the Australian gaffer of the Living Ventures which runs this operation, should be very proud of Australasia.

ALL SCORED CONFIDENTIAL REVIEWS ARE IMPARTIAL AND PAID FOR BY THE MAGAZINE. £1000 to the reader who can prove otherwise, and dismissal for the staff member who wrote a review scored out of twenty on a freebie from the restaurant.