Jonathan Schofield on the causes, the myths and the rebuilding

At 11.17am on Saturday 15th June 1996, the Provisional IRA detonated a red and white Ford Cargo truck between Marks & Spencer and the Arndale Centre on Corporation Street.

The truck had been abandoned by two men in hoods and given a parking ticket. At 9.40am in the morning, TV company Granada received a coded call saying there was a bomb at the corner of Corporation Street and Cannon Street. The informant, a man with an Irish accent, said the bomb would explode in an hour.

A bomb squad was scrambled from Liverpool and attempted to defuse the bomb with a remote-controlled machine. But there wasn’t enough time. Fortunately the police had managed to move up to 80,000 people, who were shopping or working in the area, away from the focus of the explosion.

What was the result?

The bomb injured 212 people but miraculously killed no one, although confusion and concern was aroused by numbers of mannequins blown from shop displays. Most of the windows within half a kilometre were blown out, although the way the blast moved around the tight street pattern created unpredictable paths of damage. The blast cloud rose 300m (1000ft) into the air.

The explosion caused around £700m of damage (equivalent to around £1.4bn today) across 100,000 sq m of commercial space. Part of the key retail area of city centre was put out of action for three years, an especially damaging time for the core of the region as it coincided with the Trafford Centre opening in 1998. Anchor store Marks & Spencer didn’t return to its old site until 1999. It was re-opened by Sam Hughes, aged three, who had been photographed as a seven-month-old baby being carried bleeding from the wreckage; cut by flying glass, he’d needed stitches on his hand and fingers.

This area of the city centre also lost great retail charm, with the failure of the Triangle Shopping Centre killing off the quirky bazaar of the Corn Exchange and the much-loved antiques market under the Royal Exchange disappearing.

Why did they target Manchester?

In December 1993 the British and Irish governments came together and issued the Downing Street Declaration. This handshake across a 70-year chasm since Irish independence in the south of the island of Ireland accepted the right of Sinn Fein to contribute to peace negotiations, as long as their military wing, the Provisional IRA, called a ceasefire. This duly followed in August 1994.

One theory behind previous bombings in 1996 and the one in Manchester is that pressure from British Prime Minister John Major on the IRA to disarm triggered the resumption of the IRA’s murderous campaign. In turn this was said to have come from his need to work with the Unionist parties at Westminster as his majority dwindled.

Another theory is that the IRA thought their side had conceded too much ground and the hawks among them wanted to hurt the UK by hitting economic centres. This reminder of their terrorist potency would be worth it, irrespective of casualties. So evil was resumed. First, London was attacked with the deadliest assault being the Docklands bombing in February 1996 which killed two innocents and injured 39 using a device in a Ford Cargo truck. The next major attack was Manchester using, again, a Ford Cargo truck.

What was the response?

The initial response was outrage from the UK government and disbelief from the Irish government. But immediately the city community (under the new leadership of Richard Leese) galvanised itself and, with the aid of a very supportive Conservative government (particularly Michael Heseltine, who guaranteed immediately the provision of £84m), made plans to rebuild the streets and buildings and radically improve what had been there before.

Incidentally, the day after the bomb, the Euro ’96 match between Germany and Russia took place at Old Trafford. It was taken as a symbol of defiance against the IRA. Five months after the bomb, a winner of an international competition to redesign the affected area was announced, although there were some raised eyebrows that this was announced on November 5th. Gun powder, treason and plot indeed.

The competition to rebuild

The brief for the re-design had been clear: ‘We want to see a development and investment framework established which creates an architecturally distinctive core, which is of urban character, and is responsive to the access needs of the young and old, people with disabilities, and which is physically and socially integrated with the rest of the City. Our objective is to maximise private investment and stimulate economic activity. The framework must promote the widest possible range of opportunities for people to live, shop, work and relax safely; and where activity can take place at most times of day and night.’

The winner of the bid to re-design was the consortium EDAW which included Manchester practice Ian Simpson Architects (now SimpsonHaugh.) Their plan included: a new square bordered by the Arndale Centre, the Corn Exchange and a new Marks & Spencer linked to St Ann’s Square by a new pedestrianised street; an extension of the Arndale Centre to the north including a Winter Garden; a cultural building and leisure development at Maxwell House (now the Printworks); and a new transport interchange. Their bid emphasised connectivity with the rest of the city.

Following another Provisional IRA ceasefire and the landmark Good Friday Agreement in 1998, the peace process was firmly back in place. A further Republican atrocity, in this case from the Real IRA, in Omagh in August 1998, killed 31. The backlash from all sides, including the Republican, led to the Real IRA and other groups to declare ceasefires.

Meanwhile the investigation into who had left the Manchester bomb had gained ground but action on evidence which uncovered the identities of the two bombers was parked, probably as part of the compromise taken in the Good Friday Agreement. In 1999 Manchester Evening News journalist, Steve Panter, was leaked information about the identity of one bomber. The paper released the name of a man, Declan McCann, who denied involvement. The leak contained a line about Greater Manchester Police (GMP) having enough evidence to charge McCann. Eventually DCI Mutch of Greater Manchester Police was arrested for misconduct in being the source of the leak and Panter was found in contempt of court for not revealing his source. Mutch was acquitted, although he had to pay £10,000 costs, Panter’s case was dropped because it wasn’t in the public interest.

Thus, the only arrests for a bomb which injured 212 and caused £700m of damage have been those of a policeman and a journalist.

Over two decades on...

Manchester city centre, especially around the bomb area, is a far better place to walk around, work and live within than it was in 1996. But then again, it was always going to be given the national economic surge of the late nineties and the early noughties.

Delivery of EDAW’s masterplan has been a complete success, however, in linking St Ann’s Square - via Exchange Square and Cathedral Gardens - to Victoria Station. This brings the medieval heart of Manchester around the Cathedral and Chetham’s Library and School actively into the life of the city. The first stretch of this ‘pedestrian boulevard’ is New Cathedral Street, which was an immediate retail success and encouraged Selfridges and Harvey Nichols to come to Manchester.

The various incarnations of Urbis have settled down into the popular National Football Museum. The Printworks, with its cinema and bars, has also proved a success; the transport interchange has been delivered on Shudehill; and the Arndale Centre’s northern end has been improved.

Yet, parts of the EDAW plans have never been fulfilled or attained the level anticipated. The concrete lump of Shambles West, incorporating the Renaissance Hotel, still spoils the frontage to the River Irwell, while other riverside improvements have been piecemeal and poor - on the Manchester side that is, Salford is making progress with Greengate Square. Perhaps the main disappointment has been the maintenance of the public realm that was installed: paving has been replaced with tarmac, the water features (as usual in Manchester) work sporadically and grassed areas within Cathedral Gardens have been replaced by astro-turf.

In November 1999, the Guardian wrote: ‘Rebuilding Manchester has so far cost £550m, with business providing the bulk of the cash following an initial injection of £84m from the government, the EU, and the millennium fund. But by early next century the bill could easily top £1bn, with big retailers, leisure companies, developers and house builders queuing up to invest in a city which has reinvented itself - and, significantly, turned the tide against big out of town shopping centres.’

This optimism within the area affected by the bomb has been met, but only in a limited way, largely down to lack of City Council upkeep with the public realm. Much remains to be done, although a new masterplan offers encouragement.

It’s become a cliché that on Saturday 15th June, 1996, at 11.17am, a city changed. Manchester went striding, as vigorously as a soldier in a Soviet propaganda poster, into the sunlit uplands of rejuvenation, regeneration, renaissance and every other word prefixed with ‘re’ you can sling a stick at.

This is wrong-headed. The bomb wasn't the beginning of a resurgent Manchester. It was a moment in the process of the ‘thinking big’ fight back.

The truth is the city had already intellectually changed by the time that big June boom-bang put things back rather than pushed them forward. Olympic bids, the council deciding to work in partnership with commerce rather than against it, the movement back to city centre living, the re-birth of an urban sensibility (this being the key) had already seen the Manchester mood swing upwards.

Of course, the media loves to turn history into a sound bite. In this case the bomb gave the media, and people who like to simplify the complex, their ‘foundation myth’ of modern Manchester.

Yet it’s a peculiarly nasty myth. How can a bomb that creates £700m of damage and injures 212 people ever be a positive? Maybe commentators need to ask those 212 people whether they feel glad to have been part of the event that 'changed Manchester.' It’s also condescending to say Manchester needed the 'leg-up' of a bomb so carelessly and callously placed by terrorists to free itself from economic torpor. Before the bomb and subsequently, Manchester has not needed explosives as a leg-up. Nobody ever does.

Of course the bomb accelerated change in a relatively small, if significant, corner of the city centre. Nor can there be anything but praise for how the city organised itself around the awful event, with the aid of Michael Heseltine and a Conservative Government.

But other British cities, in the 24 years after 1996, haven’t required massive bombs to improve their city centres, yet still they improved. So surely in the far more dynamic city of Manchester (as all true Mancunians will attest, evidence or no), those changes would have happened if not quite in the way forced upon the city by the bomb. 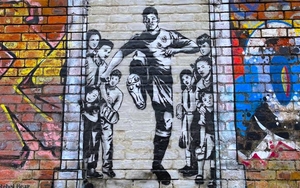 Not everyone likes Rebel Bear’s work