GORDO has been eating Harry Yeung's food at the Yang Sing for an astonishing thirty years. In three different locations too.

What Harry does is the traditional stir-fry with a lightness of touch that jiggles great flavour with bringing the best out of the ingredients.

A lot of dim sum has passed under the bridge since the seventies including a break up with Harry’s brother, Gerry - arguably the finest front of house in Manchester. Gordo was not alone in thinking that the restaurant would probably suffer with the two brothers not operating together, and that proved to be the case.

But, after half a decade in the doldrums, is there good news on the horizon? 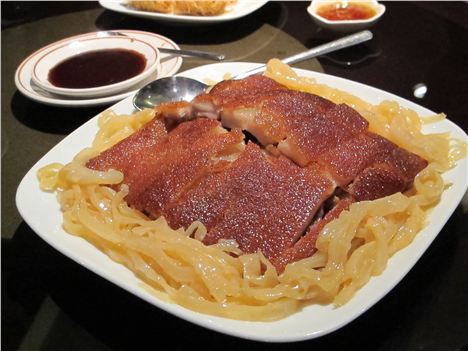 Thirty years ago, Harry was a great innovator with Chinese food; he brought real dim sum to Manchester, along with something that blew a young Gordo’s mind; spring rolls the size of half a fat cigar, tiny in comparison to those he got in the Chinese chippies in Salford. The latter were the size of toilet rolls and not much tastier, whilst Harry’s had duck and exotic mushrooms. Little flavour bombs, as crisp as a starched collar.

Oh, and soy sauce on the table. How cool was that? Lobster, whole Dover sole and wild sea bass were steamed with ginger and spring onion, a revelation, whilst in addition to fried rice that sang arias, noodles had fire in them. Singapore vermicelli. Oh God, how good were they?

We ate crispy belly pork and duck, which hung in the window, all mahogany skin and divine meat that had been basted in the process by its own fat, finishing up as lean and tasty as Jessica Ennis’s thighs. You could cut that duck with a blunt spoon.

Over the decades, the rest of the Chinese community cottoned on to the fact that the Gai Jin (us ‘foreign devils’) would pay a lot more for authentic dishes. Restaurants started to spring up around Faulkner Street and Chinatown began to take shape.

The reality is that Manchester’s Chinese community have a lot to thank Harry and Gerry Yeung for. 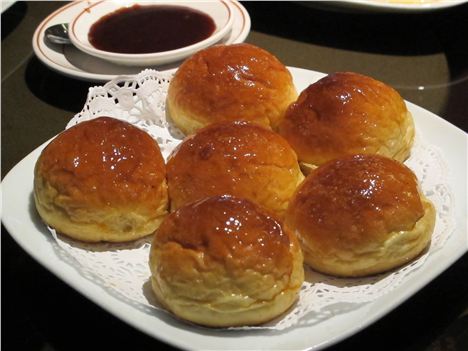 But what about today, food-wise?

Harry’s challenge is that he is in danger of being outsmarted by the new generation of Chinese restaurateurs, opening the likes of Red’n’Hot and the Red Chilli. Meanwhile Thai, Vietnamese and Japanese restaurants are giving all the Chinese restaurants, be they Cantonese, Szechuan or Hunan, a good run for their money.

Having had four separate dinners and lunches at Harry’s gaff over the past six months Gordo has come to a conclusion. As well as being able to do a little forward thinking.

Let’s talk about the ambience first. This is a restaurant, not a café. The only Chinese competitor in town that beats the place on comfort and feel is Wings. The Yang Sing is still a restaurant Gordo would use on special occasions; walking down those steps into the main room always gives the Fat One a buzz; it was no different this afternoon on a test walk-in. Big occasions, yes. Yet you can sit in there on a table for one and worry a few dim sum round the table in perfect peace and comfort, reading the paper. Or the iPad. 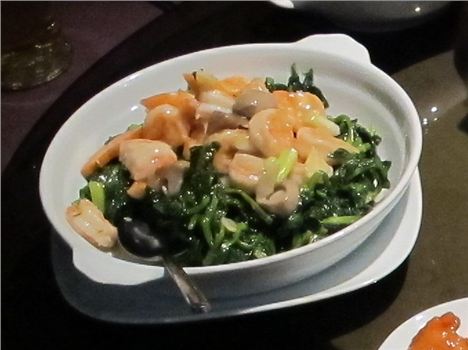 Service is only let down when dealing with the staff who are still learning English - as in mental Italian restaurants with the same problem and added Italian mentalism stoked up by too much testosterone and strong coffee. So do yourself a favour and understand, compensate and show a little humour. Spot the other four or five girls and guys who are ‘middle management’ on the floor and ask them for any help you need. They are brilliant.

At first glance you are looking at a pretty traditional Cantonese menu; Gordo is happy with that. Harry won’t do crispy duck with pancakes though. Just so you know. Get over it. 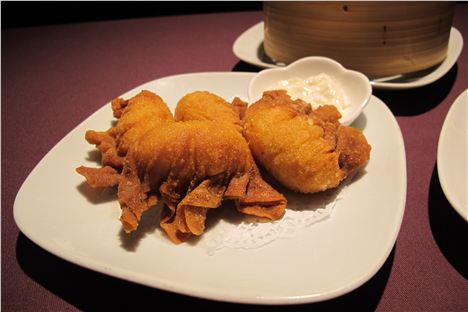 What Harry does is the traditional stir-fry with a lightness of touch that jiggles great flavour with bringing the best out of the ingredients. Gordo apologises in advance for moving away from his traditional listing of dish by dish and their pricing; he has eaten in excess of thirty dishes, so he is going to be a little different here. He also lost most of his notes along with his little black book on the piss last week.

Back to the food. Yes. At Gordo’s Xmas lunch for his daughter, his shiney new trainee son-in-law Mike and the Sharrocks, the plan was simple. Gordo grabbed hold of Harry and told him he was prepared to spend thirty-five English each and to just bring it on. Ruth Allan, Gordo’s pal, and fellow food writer was also on hand to adjudicate. Three months pregnant, with twins, she was eating for three.

Harry brought traditional dim sum first; what we call shredded-wheat prawns with a sharp, vinegary dipping sauce. Superb, crunchy with a firm meaty prawn filling, brimming with naughty prawny-ness. Char Sui pork buns were worth a Michelin star for the flawless execution of the dough mix and bake that rose in the oven having been brushed with something slightly sweet to glisten in the light on the table.

The shredded pork filling was what all the trendy ‘trash diners’ of the Northern Quarter and Brick Lane would shave their beards off for when trying to out-smart each other with their pulled-pork-this-that-and-the-other dishes. You, my friends, are pussies when it comes to handling pork compared with The Big H. Ultimate richness wrapped in the ultimate antidote. A truly lovely dish. 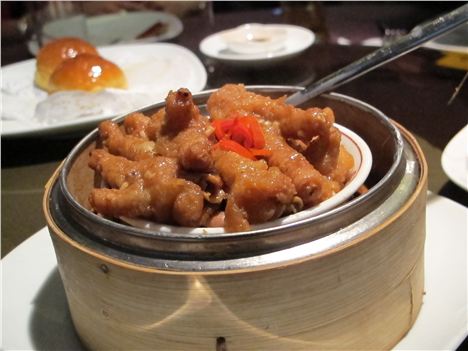 Sui Mai are incomparible, the minced pork and prawn stuffing semi wrapped in the Chinese take on pasta, and steamed. At the lunch today, fried prawn envelopes with mayonnaise dip shone, as did the spring rolls with shredded duck and bamboo shoots.

Peter, front of house boss who has got younger as the years roll on, apologised for the restricted choice in the dim sum menu. Gordo thought he was taking the mickey. He had counted eighty on the menu. A poor show apparently and will be rectified at the end of the month. Yes. Gordo was baffled as well. 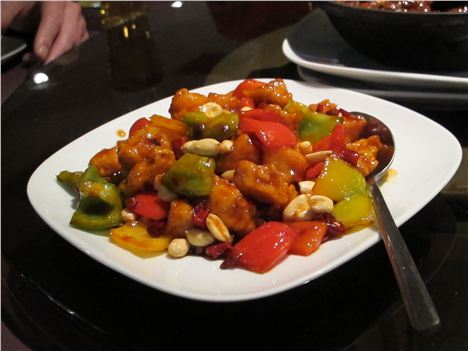 Moving on, crispy suckling pig with jellyfish was a hit with Howard Sharrock, who took a complete liking to the jellyfish; Gordo thinks it’s pointless. The Editor, Schofield loves it as well. Gordo was left happy, mind you, with the pig again. Brilliantly seasoned and crispy, with lots of creamy white fat underneath. 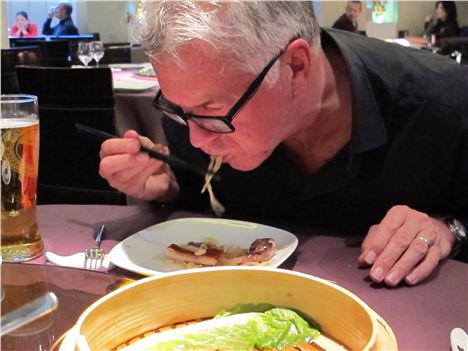 An old fashioned dish of sweet and sour fish was a misfire; the fish over cooked, probably monkfish, simply too solid for this cooking method. The batter was, well, not right. The sweet and sour sauce was, mind you, sharp with what tastes like a good sherry vinegar cutting through the stickiness. It’s probably Chinese rice wine for all Gordo knows, but, by The Lord, it works whatever it is. 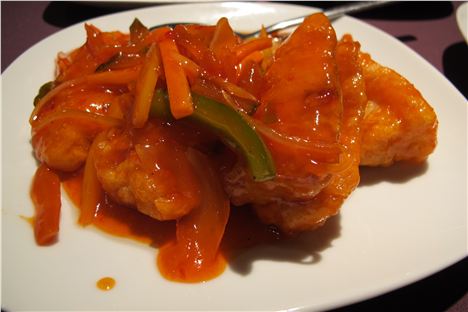 Crispy pork and duck with boiled rice came with broccoli, the pork a little better than the duck. It’s difficult to beat the Happy Seasons take on this great hangover cure, and unfortunately Harry’s team don’t quite make it.

Before we close on the food, Harry brought out a dish of lamb leg steaks, which were dark and mysterious. But fit. Gordo thinks that they were the ones with lemon grass sauce and a lot of cracked black pepper. Just on a plate, take a few slices off them. A major winner. 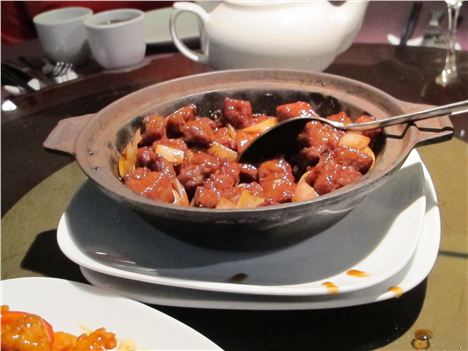 The prices are in line with all the comparable restaurants, you can count on dim sum as between £3.50 and £5.50, starters between £5 up to £11 for spare ribs and mains between £11 and £16. The set menus, by the way, are a great way of launching yourself into Harry’s collection.

The wine list, however, is a major problem. Too little under thirty quid. The house wines are twenty, the rest are, to Gordo’s mind, expensive. Mind you there is a Boizel Brut Reserve  NV (Champagne) on at £39.50 which is a good punt if you’re celebrating or diabetic.  We drank beer and a couple of bottles or three of Riesling Grand Cru ‘Rosaker’ – Sipp Mack. At £35 quid. It stands up well to highly spiced food.

Gordo was told he was diabetic when he was forty. The Nurse told him not to drink beer any more and stick to wine, preferably dry white. Gordo hadn’t drunk a pint of beer in his life. Perversely, he came out of the clinic, went into the Carter’s Arms and got rancid on the house bitter. And, he’s loved it ever since. Stupid, eh?

Now, the conclusion. Gordo loves Harry for many reasons, not just his cooking and encyclopaedic knowledge of Manchester United and the love of baiting the blues. But it has to be said that standards had slipped. The food over the past few months has seen huge improvements and some innovation. But it needs to be better. Simply because Harry is the best Cantonese chef in the North West. He can do it. And Gordo thinks it’s going to happen.

The three pains, as Harry calls them. Bonnie, Yinhen and Yinting Yeung. The second generation. 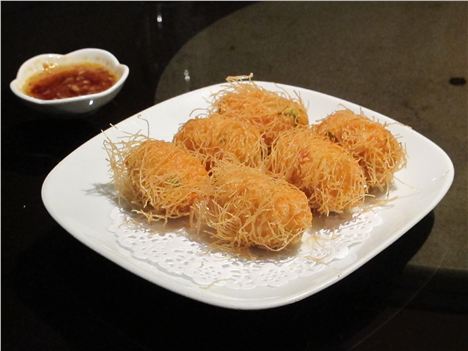 Bonnie has become a powerhouse of marketing and promotion for the brand, whilst the boys are charming the punters. Bonnie in particular is driving her father mad currently. I get the feeling that secretly Harry loves it. Gordo can see a second wind coming. (Is this in terms of prospects for the restaurant or because you’ve eaten too much. Ed.)

Currently the Yang Sing is, in Harry’s terms an Arsenal of a restaurant, good, great at times, but needs an influx of the new, an innovation that drove Harry thirty years ago. Wenger, the Arsenal manager, will sort his team out. I have a feeling that Harry will as well. Northern food and drink award winners for 2021
Read Next
● / News