My preconception from the media buzz was that Wilderness is a Nordic forest-nymph of a restaurant. Whining that I don’t have anything Scandi enough to wear in my charity shop wardrobe, my equally classy friend suggested adopting a royal blue and yellow palette. I passed, but we arrived to find the restaurant decked out in Mexican Cambaya. So whatever.

The upstairs cocktail bar is like everyone’s dream loft apartment. The ‘living, breathing cocktail menu’ dubbed Aperture is also an art project - of course it is. My choice, Edge-lands (£10), incorporated ‘hedgerow’ and ‘foraged mist’.

It could almost be satire - Portlandia in restaurant form. But part of me loves the innovative audacity. Pretentious or not, you can’t deny that a good deal of enthusiasm and creativity has gone into this.

While we admired the cocktail menu, we were given a liquid amuse bouche of rum and fresh strawberries - a juicy daiquiri in big girl pants. We were expecting more theatre from our main event cocktails though. Visually minimalist, mine is a zhuzhed-up and face meltingly strong Manhattan but the eccentric ingredients didn't jump out. Foraged mist? Scotch mist more like.

A Nebula (£9.50) was candy pink and fruitier but ‘clarified milk’ didn't bring anything to the table. They do some clever cocktails on tap downstairs that I hear are very good.

Grilled malt barley sourdough (£4.50) while a touch on the charred side was good as any other sourdough I’ve eaten. We slathered on the sweet onion butter as if we planned to build a house and were not sorry. When they brought us next door’s ten minutes later, we were reluctant to do the right thing.

Sticky, miso-basted lamb skewers (£5) are the meaty campfire marshmallows of your dreams. Layers of squishy fat provided sensuality and a sprinkling of nutritional yeast added that childhood satisfaction you get from a layer of crunched up crisps on a butty. The cruel irony of something normally employed to provide cheesy umami in vegan dishes moonlighting here crisped-up in lamb’s fat and adorning its unabashed flesh was not lost on me.

The entire wine list is natural, which is hotter than Lizzo wearing LG SPZL Adidas in the Amazon right now. My mind is open but I’m not evangelical yet.

It was more drinkable than some I've tried, with notes of vanilla and slightly bitter blackcurrant but not enough oomph for me. My friend’s Tutti I Giorni Sangiovese/Ciliegolo/Alicante had even less but she was happy and next door had ordered a bottle although theirs seemed to be going down slowly.

We were told that the dishes on the ‘food menu’ - as opposed to the ‘vegan menu’ - that don’t mention flesh are suitable for vegetarians but were sceptical about the parmesan in hispi cabbage, black garlic, aged Parmesan and hazelnut (£7).

My 20-year-strong veggie friend disclosed that it’s in her ‘blind spot’ anyway, along with prawn crackers (don’t tell PETA) so we gave the vegan version - where nutritional yeast returns to its day job - a miss.

You can’t move for hispi cabbages (aka sweetheart - 70p in Tesco) in modern bistros; ours arrived looking like a mouldy slipper but the flavours were a knockout and we locked forks to finish it. Using sleight of hand to elevate simple ingredients to ‘how did you do that?’ status is a sign of a great chef and this is a recurring theme at Wilderness.

“Birch sap!”, my friend exclaimed on reading the menu - it’s the new coconut water apparently - but the woodland mushroom, spätzle, Jerusalem artichoke and birch sap (£8) didn't quite live up to our anticipation.

She screwed her nose up.

I think it had a pleasant earthy complexity but wouldn’t order it again.

Equally, the vegetarian found roast cauliflower, pumpkin seed butter and puffed buckwheat (£7) 'challenging', but the bitterness she didn't like is actually what I did like. I wonder - do vegan dishes created by meat eaters have a different flavour profile to those devised by vegan chefs? A sprinkling of puffed buckwheat was like mini, flavourless sugar puffs.

Another vegan dish, heritage tomato tartare, elderflower and pickled green strawberry (£9) - priced the same on the main menu, but with added cured sea bass - was another case of disarming simplicity. Tiny morsels of what seemed to be black olive - but might have been liquorice seed or leprechaun tears or something - lit up our eyes. Our server didn't know what they are and never returned with an answer.

Roast monkfish, burnt lettuce, chive and brown shrimp was the priciest plate at £18 and although the fish was well cooked and meaty with a fine sauce and salty little shrimps, it just didn't wow me like some of the others.

However, fermented potatoes (£4) with long black pepper mayo were piquant perfection. We dreamed of having a bucket of these to munch in front of the TV all night.

Until recently, I didn’t think I was that bothered about peas. Then I ate something indecent at Restaurant MCR, followed by something jaw-dropping at WTLGI, it turns out I am now something of a 'peavert'. English peas, mint and fresh ricotta (£4) is outstanding.

As green as this Metro journalist, crunchy with pumpkins seeds, creamy with ricotta. It just works. I urge you to try this. Something tells me the vegan version with whipped tofu will be just as good.

We were in need of a break before dessert but our waitress informed us she was clocking off and the kitchen closing in 20 minutes. Next door’s treacle tart was delivered to us moments later and we handed it over apologetically. A quarter of an hour flew by and with no staff to be seen we panicked, but managed to order just in the nick of time.

At first, we couldn't put our fingers on what the lovage granita in grilled peach, Skyr yoghurt, almond and lovage granita (£6) reminded us of, so grassy, so fresh - oh lordy, it’s celery! I know I’m going to have a hard time convincing you that celery flavoured crushed ice on your dessert is the future but just trust me on this one. This dessert was absolute perfection. It keeps popping into my mind like a Superzoom story as I shed a little tear.

This kind of edgy experimentation is what you might expect from the much more expensive Mana in Ancoats, there are some parallels too with Where The Light Gets In. This is impressively ambitious cooking at an astonishingly accessible price. It's something fresh for the NQ.

A Wilderness I’d like to get lost in again and again. 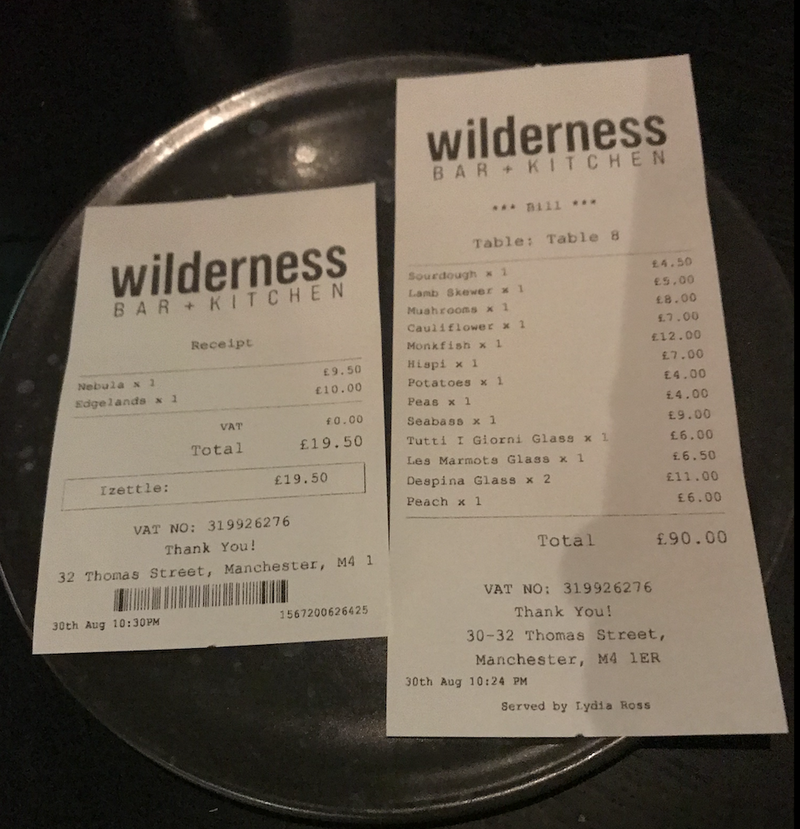 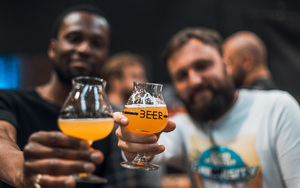 What to expect from the inaugural Manchester Craft Beer Festival - we talk to co-founder...