THAT old (Ian) Brown chestnut about Manchester having everything except a beach should really be segued into “…a beach where decent seafood can be landed and enjoyed”. Our fish restaurant record is woeful; the salty spectres of long-departed Livebait and fish! lie strewn across the city centre’s barren shore, where only newcomer Randall & Aubin is seriously trawling the oceans on our behalf (and even their new bar snack menu majors on chipolatas and devilled eggs).

Oh yes, and bobbing along bravely out in Heaton Moor there’s Easy Fish, a terrific ’monger that cooks the stuff, too, in its smart cafe. I gave it 14/20 back in 2015; earlier this year Lucy Tomlinson edged it up to 14.5/20. This is where Chorton’s The Oystercatcher sources its raw materials.

There’s a primal joy in tearing into crisp fish skin...

I’d expected their suppliers would be Out of the Blue down the road, where I’d purchased a brace of lemon sole, some monkfish and new season samphire en route. I was spoilt for choice, as usual.

I've just returned from America’s Eastern seaboard, where we had feasted on leviathan lobsters and soft shell steamer clams the size of small mammals. Saturday lunchtime in downtown Chorlton is hardly Nantucket or Cape Cod but the former Grey’s Larder, with lots of light planking, could pass muster as a seafood shack. On first impression, though, with a gaggle of babies and some breastfeeding underway, it might also have doubled as a creche. 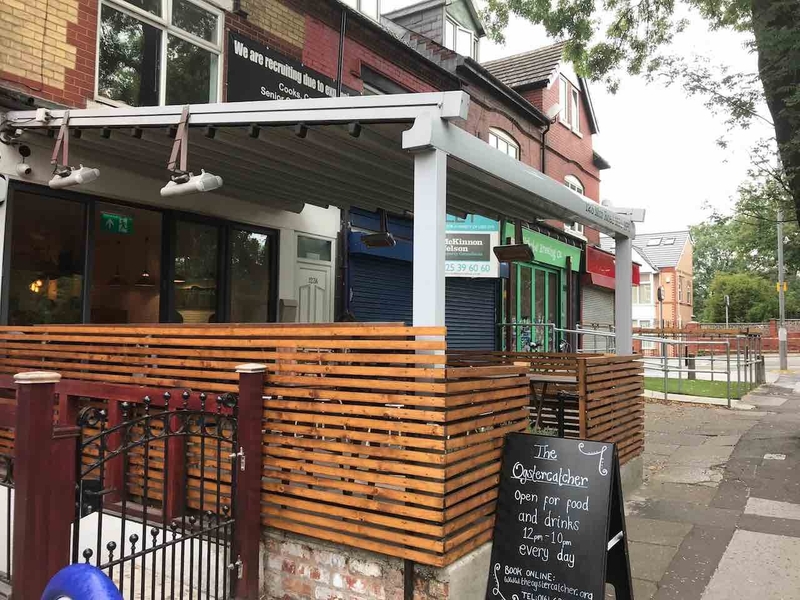 We concentrated on the – sensibly concise – menu while broaching the perfect daytime fish wine, a 11.5 % Quinta da Pousade Areal Vinho Verde (£26). A world away from most thin, prickly VVs, citrussy fresh but with surprising complexity.

After all those creamy New England clam chowders, The Oystercatcher’s tomato-based Manhattan version came as a culture shock, but for £6 it packed in a lot of prime fish and spice. My trio of dainty, deep-fried brown-meat crab cakes, for the same price, were gloriously crisp and crabby.

A delightful start, but then we waited a long while for three mains to arrive - by which time all the wee ones had been toted home for their afternoon nap. Denied any view of lapping waves or wheeling gulls, we fretted. Still eventually, thar she blows and it was all worth the wait.

Back across the Pond you find ‘scrod’ on the fish menus, from a now-obsolete Dutch word schrode, which means “a piece cut off.” Not necessarily cod, it betokens a fillet of the firmest white-fleshed fish of the catch.

The Oystercatcher’s uber-flaky cod loin (£15) was certainly ‘scrodworthy’, scattered with our own puny but satisfying clams. It came accompanied by al dente caramelised  cauliflower, which I suspect had been shown the Esse grill.

Our other two mains came from the ‘Charcoal Oven’ section, manned by Recep Canliisik, once of the Lead Station and a Turk with a passion for grilling; his co-owner Duncan Ranyard’s CV includes Hispi, which is always reassuring.

Tender charred squid (£14) was matched by a Romesco sauce better than any I’ve had in the city’s abundant Spanish joints. Even better was a whole sea bream (£15, main image) with its own vivid, minty salsa verde. There’s a primal joy in tearing into crisp fish skin, then prising firm fish off the bone and this was magnificently messy.

It would be hard next time to resist the £40 Thai-spiced, roasted monkfish tail to share, the most expensive dish on a reasonably priced menu, where our sides of triple chips and peas, pea shoots, little gem and lovage came in at only £3 apiece.

It’s early days and we suspect the fishy offering may become more ambitious (there is  a flat iron steak for the unrepentant carnivore). For the moment The Oystercatcher is doing lots of little things just right. A raspberry crème brûlée (£6) was richly fruity, ditto two plate-cleansing scoops of clementine and bergamot sorbet (£4.50) bought in from Ginger’s Comfort Emporium.

There’s a quiet sophistication and further affordability about the drinks menu with a Negroni at £7, a non-vintage Bolney bubbly from Sussex at £50 and, to kick off Manzanilla sherry at £4 a glass – and my own preferred timber-shivering option, a Bloody Mary oyster shot for £3.50.