'A star rising with the tide’ - The Fisherman’s Table, Marple, reviewed

IN those brief hours of slumber before he gets up every morning at 2am to make the four-hour round trip to Fleetwood Dock, does Jamie Barrett dream of fish?

They have certainly loomed large in his life. As a twelve-year-old he delivered seafood by bike to Oxford colleges from its Covered Market, later he cajoled trawlermen to let him learn their trade out at sea. Eventually he relocated to be closer to Fleetwood, which supplies his ‘Marple Fish’ fishmongers and in November he expanded into a standalone restaurant in the town, using the produce he so expertly sources.

Yet it was his fascination with a fish species he is never going to put on a plate that led to his masterstroke in creating ‘The Fisherman’s Table’, already on course to become the region’s best specialist fish restaurant (sorry Oystercatcher and Easy Fish Co.)

Some eight years ago Jamie struck up a friendship with a young chef, David Gadd, who shared his niche interest in freshwater stingrays. It’s all a matter of scale. David has a tank at home containing the one; Jamie breeds them in a custom-built pool that holds 200.

In those days Kentishman David, still not yet twenty, was working for Stephen Harris at the legendary Sportsman near Whitstable, regularly crowned the UK’s best food pub. After six years he moved as head chef to the Good Food Guide lauded Scot and Frog French bistro in Deal.

It’s a long way from Kent to a 270-year old building in Stockport Metropolitan Borough that until recently housed a car accessories store. But David has answered the call from his old mate and, on the evidence of our visit, he is cooking up a storm at sea in the smartly refurbished premises, all exposed beams and nautical nods.

A £9 starter of seared Shetland scallops (it’s not just about Fleetwood sourcing) echoes his time at the Sportsman’s with it’s dressing of sherry vinegar and capers. There’s samphire on the plate, too. We later shared a £4 side of the stuff with tomatoes and, for a £1.50 supplement, a whole shoal of tiny Morecambe Bay shrimp.

My Whitby crab risotto was just £7 and among the best dishes I’ve eaten in months. Freshness is the Barrett/Gadd mantra and this had it in spades, fresh white meat on top of a large bowl of rice that oozed rich crabby stock. The same shell stockpot fuelled the bisque that bore a tranche of baked wild Scottish halibut – a rebuff to all who decry the inevitable dryness of this doyen of right-eye flounders. It was meltingly flaky, draped with fennel, crab’s best buddy.  At £19 the most expensive dish on the menu, it felt huge value.

Dover Sole on the bone was on the menu at a couple of quid cheaper. I was hoping they might go through my favourite fish ceremony – lifting it off the bone at table (the last time I recall that was on The Lowry Hotel’s Riverside terrace; Baratxuri do the same for whole turbot). Alas, there’d been a run on it, so I settled for pan-fried Cornish sea bream (£16), its skin perfectly crisped, vibrant salsa verde and tiny roundels of seared squid making it sing of the Med.

For those not of a piscatorial persuasion, there is a 28-day aged rib eye (with a surf and turf option, naturally) but why bother? The red wines on the list seem a tad redundant. We settled for one of their most popular whites. Perhaps the name is a lure to the curious – Crego e Monaguillo (£24), which means ‘Priest and Altar Boy’, both of whom feature on the label of this blend of Godello and Treixadura from Monterrei in North West Spain. It’s a perfect seafood accompaniment, citrus and blossom on the nose and a streak of acidity in its rich, floral fruit.

Puddings at seafood restaurants are often an afterthought. Not here, with an array, all at just a fiver. They even do a trio of sweets for that price. My poached pear and almond tart was caramelised and juicy with a blob of vanilla ice cream. A pistachio creme brulée was even better. Gadd’s French bistro skills are apparent.

Still you’ll make the voyage to inland Marple for the fish. In recent months I’ve tackled Mitch Tonks’ The Seahorse in Dartmouth and whole turbot at The Oyster Shack in Devon neighbour Bigbury. I’ve made pilgrimages to waterfront lobster meccas around Cape Cod and investigated a whole raft of places in the Basque Country. The Fisherman’s Table is equally satisfying in its devotion to seafood. A star is rising with the tide. 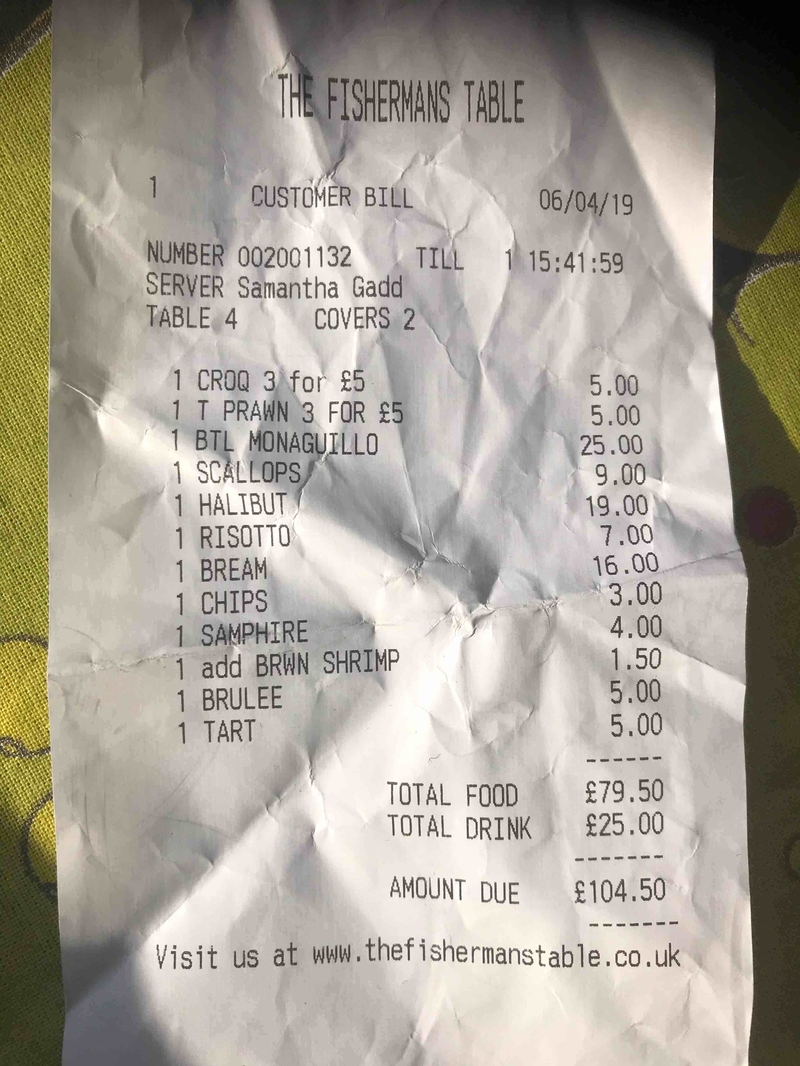