Life, as saintly old Cilla used to warble on a weekend, is full, full of surprises. But despite such sage advice, I would never have expected that a former MOT centre on a main road in Manchester would provide the setting for my favourite meal of the year so far.

Yep, lunch at Firehouse was quite the surprise.

Eye-rolling cynics may dismiss this as simply a nice bit of bird, but that would be to do the kitchen at Firehouse a grave disservice.

It’s a vast room but never feels empty or soulless. Quite the opposite. We might be the first in, keen as Colman’s, but before long a sizeable crowd starts to congregate beneath the disco balls, knocking back tequila to an uplifting soundtrack emanating from the DJ booth next to the bogs. It’s only just gone lunchtime.

Original floor markings hark back to the building’s former usage, and garage shutters adorn the broad walls, but the old mechanics have kindly left behind their pretty hanging baskets of foliage that spruce the space up a little. So far, so Insta-friendly party palace, I know. But you can park any concerns that the food at Firehouse may be a piddling afterthought.

Coming from the same gang that’s behind Ramona, the Detroit pizza joint next door, I’m aware of their knack for keeping things to the point. The format continues here, with the “Slow Fires Kitchen” putting bronzed hunks of peri chicken front and centre, to which you can add other good things.

And in these hard-up times, the seven quid I cough up for a chunky chicken leg, bisected into drum and thigh, feels like quite the bargain. The meat is plump, the skin crisp, and the whole lot salt-and-peppered exuberantly. Praise be. Those less attuned to the sacred act of ripping charred flesh from bone may prefer the stout breast portion, which comes in at £12.50. Do not forget to squeeze your lemon.

Eye-rolling cynics may dismiss this as simply a nice bit of bird, but that would be to do the kitchen at Firehouse a grave disservice.

Take the bowl of greens that we order, because we’re adults who feel that we should. I’ve never before come away from a table with such fond recollections of something that might loosely be classed as healthy. It’s an elegant tangle of courgette, rocket and broad bean, enlivened with mint and crumbled ricotta, that we scarf by the fistful. (£6)

Or the creamy, curdy, stracciatella, (known to you and me as the best bit of a burrata), which comes anointed with sweet, dainty tomatoes, twangy vinegar and more of those stimulating herbs (£6 including one pita).

Aye, Firehouse certainly does flavour. An intravenous drip of pure, uncut umami would be on the feeble side compared to our potent plate of fingerling potatoes, flattened and roasted hard until just catching. A double dousing of both rich, yeasty mayonnaise and sharp, grated parmesan will have that effect (£4).

A word here for the workhorse of the meal: the homemade pita bread (£2.50 each). It’s both billowy and crisp, soft and chewy, and will maintain its structural integrity no matter how much of the above you load it up with. A hot honey dip (£2) is simple but supremely effective while cooling swigs of frothy Ramona Pilsner (£5.50) temper its heat.

I’m contractually obliged to order dessert, for which there are just two choices: ice cream, or ice cream with baked chocolate pudding. I’m not an idiot. There’s a fifteen-minute wait for the latter but we’re in no rush to leave, and it eventually arrives to wide-eyed gawps from surrounding tables. Rightly so. Hot, melting chocolate and soft, cold ice cream can forever be relied upon. (£6.50)

As a sombre Yorkshireman, renowned for keeping pointless chitchat to the politest minimum, the matey service at Firehouse is the opposite of what I usually go in for. But here it feels convivial, natural, and the team out front look to be enjoying themselves almost as much as the punters. Even dreary old me is tempted to hang one on and get lashed on the good-looking Margaritas postprandial. And I’ve never even had a Margarita.

Eating here will do that to you. Firehouse is far more than a fancy Nando’s. 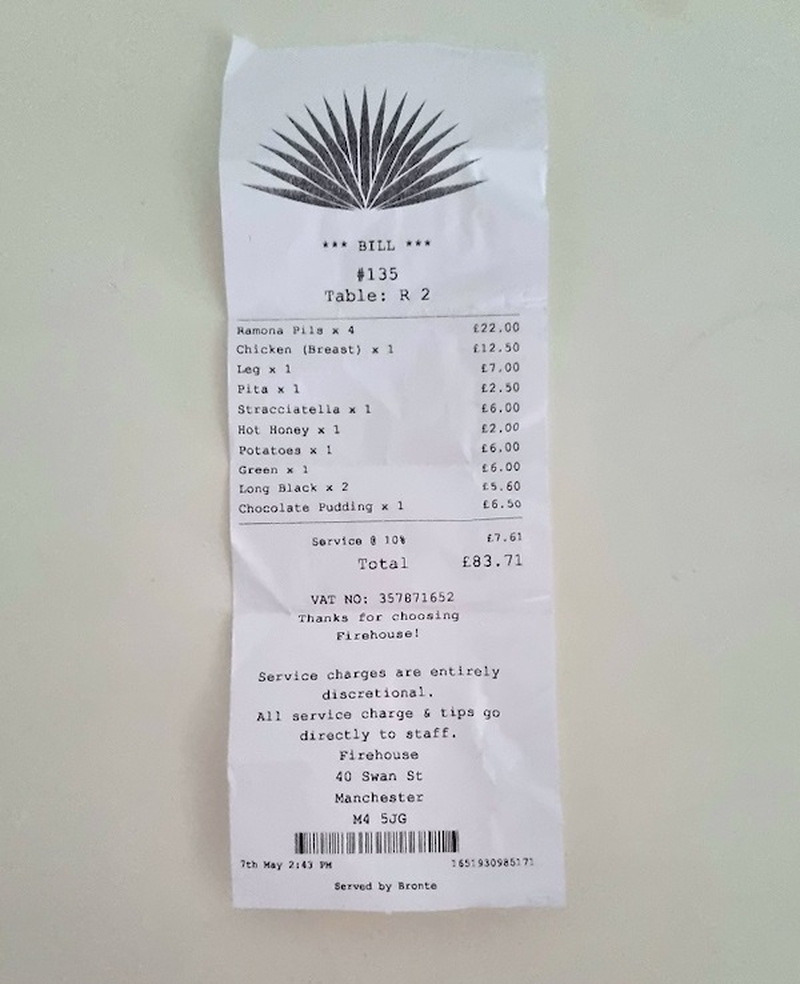