THE ALCHEMIST part two has opened on New York Street. This follows on from The Alchemist part one which opened a couple of years ago in Spinningfields.

The giant profiterole looked like a rat had been run over by a tractor and squashed flat in a cowpat. It cost £4.95 and two of us couldn't finish it. The Belgian waffles at £3.95 were better.

The new one has scale.

The original is a tight squeeze, wrapped around a building corner. This is a much more comfy affair, a huge double-room, with plenty of space to spread and show off.

There’s a very large bar area too so maybe cocktail congestion will ease – a problem with the Spinningfields operation. 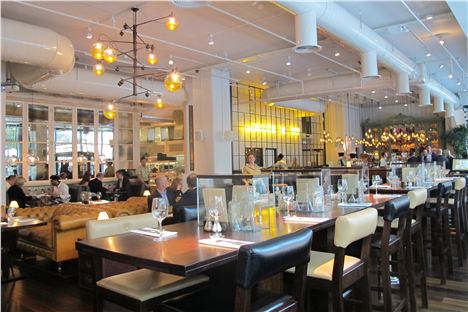 The new outlet wears its theme of Alchemy on its ample sleeve with aplomb. There’s a fabulous cabinet of curiosities as well as the usual and splendid graphic design from Trevor Johnson.

Alchemy, by the way, is the medieval notion that base metals, for example iron, could be turned into gold through various magical methods.* 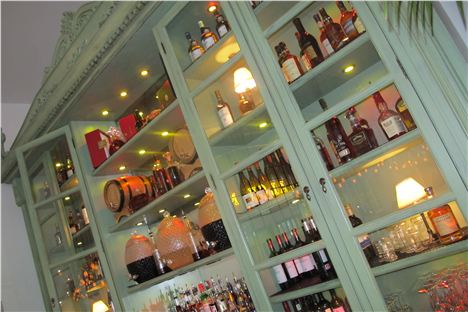 Here base materials in the form of money, are turned into food and alcohol. If you do enough converting with the latter then the results can be magical.

On the Friday lunchtime of our visit the mood was upbeat verging on the enchanted and the place was packed.

East of Spring Gardens, Manchester lacks anything like this City of London, cocktail bar-cum-restaurant, and my oh my, how the office girls and boys seemed to love it.

Foodwise there’s nothing new in terms of what’s on offer with the menu. In fact its identical to the original, a round the world snatch and grab of nachos, patatas bravas, tagine, Thai red curry, Sunday roast and Yorkshire pudding, fajitas, koftas and fried chicken in a basket.

The latter for the sum of £9.95 came all spiced and heated and smeared in such a dark coat it looked like an incinerated version of KFC.

The flesh was fine but overall it was a poor dish. There should be a couple more pieces of chicken for the price in place of the mountain of fries and another mountain of mundane coleslaw. 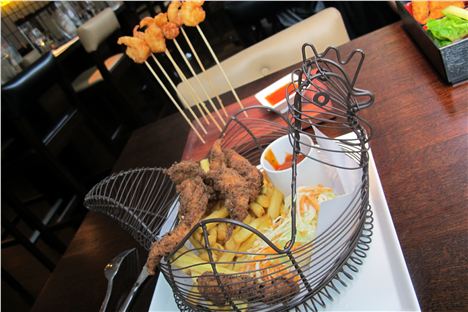 Chicken in an awkward basket

The basket the dish comes in is shaped like a big hen. Cute but trying to get at the coleslaw needs the gymnastic qualities of Beth Tweddle.

The beer battered prawn lollipops at £4.95 were as good as ever, fabulously juicy - good on their own or dipped in a sweet chilli lip-fizzing sauce. 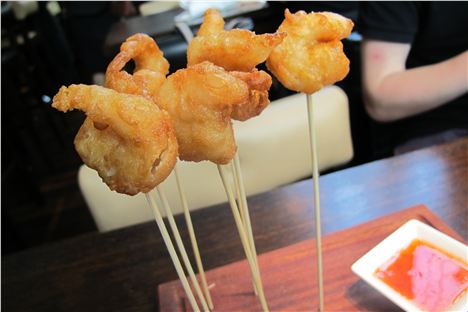 A steak sandwich was much loved at £9.50, and came with decent gravy, mushrooms and onions. There was another overfacing mountain of fries though.

The bento box of scampi (£9.95) was a picture and the star of the show in terms of presentation. The greens were welcome in a fried food heavy meal. Inevitably there were fries. 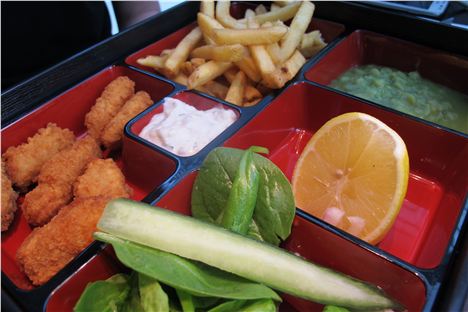 The giant profiterole looked like a rat had been run over by a tractor and then squashed flat in a cowpat (see below). It cost £4.95 and two of us couldn't finish it. The Belgian waffles at £3.95 were better, all cinnamon, sugar and vanilla ice cream. 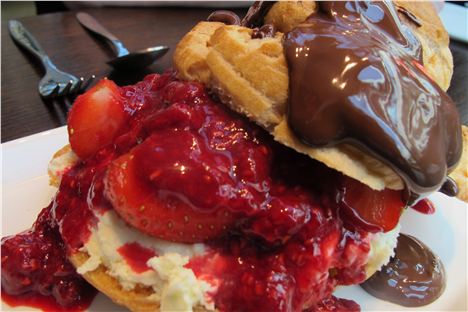 In fact they were the perfect encapsulation of what The Alchemists are all about. No surprises, but utterly competent. The new place is as smoothly efficient and as slickly cunning, as the original.

But with more elbow room and more fries.

A special mention should be made of our waitress on two visits - Kat. She was absolutely exemplary. Indeed as with any Living Ventures operation the whole team was superbly trained and selected.

The Alchemist needs to work on one or two things though, that chicken in a basket for instance. It should ditch it from the menu and use all those chicken shaped baskets as exotic moulds for Ladies Day hats.

Rather than the chicken maybe I should have gone for the 30 grams of Beluga Caviar at £80 or the £7.50 fish finger sandwich. Something a bit more distinctive. 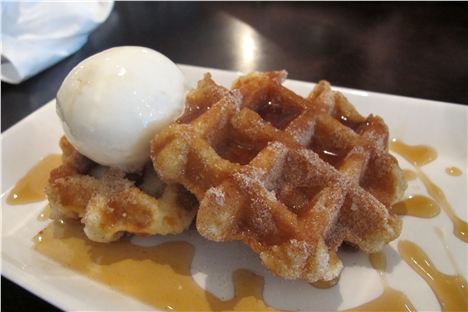 Speaking of Ladies Day, therein lies the cunning of The Alchemist. Indeed of Living Ventures.

For booze I had a Palena Sauvignin Blanc at £6.50 and a Tarquino Malbec at £6.75. But really the whole drinks selection is about flirting massively with the females.

It overflows with ‘artisan’ cocktails, flowering teas, prosecco and champagne. There is no real ale in sight.

This is an old-fashioned tactic but works every time. Get the girls in suits in, and the boys in suits will follow.

The Alchemist part two will be another Living Ventures success. You can see versions opening in Liverpool and Leeds - maybe even in the place's spiritual home of the City of Sin, London's Square Mile.

The place is ripe for replication.

But The Alchemist is an asset for the area rather than a destination. It’s neighbourhood rather than necessity. The office locals will love it.

Indeed, one of its advantages is that a weary and thirsty commuter from Sale and Timperley can probably wait until his tram is actually stopping at the nearby Mosley Street platform, before downing his lager and bounding aboard. It easily wins the closest bar to a tram stop award. 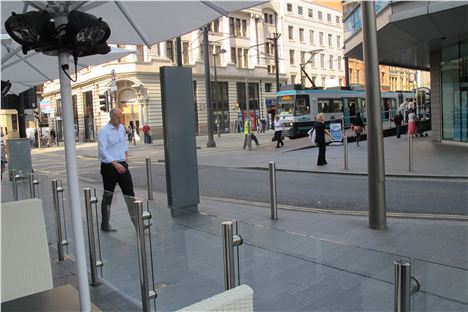 "I'll just knock this back and still make that tram."

*Manchester for several years hosted perhaps the most celebrated British alchemist, John Dee, who remains a regular feature on guided tours of the city. He was the central character in Dr Dee, An English Opera, from Damon Albarn, premiered at last year’s Manchester International Festival. Prospero in Shakespeare’s Tempest is said to have been based on him too. He failed with turning iron into gold - instead he managed to conjure up vast loads of fries.