Tenancy by Quarantine: 'a theatre project like no other I’ve ever encountered'

No rebellious squat set-up, Lucy Tomlinson has a profound experience in this unconventional Salford arts project

The sun is setting. The sky is streaked with pink as I cross the bridge over the River Irwell. As I’m walking I realise I haven’t been down this way in ages, despite being only five minutes from Victoria Station. It certainly looks a lot different to how I remember it. My destination, nestling in the seam between Manchester and Salford is a development of dozens of grey-panelled, wipe-clean houses. I turn a corner and a small paper sign in the window of a house – asking ominously: 'Must We Suffer? Who Should We Trust? Is There Ever a Right Thing To Do?' – lets me know I’m at the right place.

While it might feel like it, I’m not caught up in the plot of a New Wave film, but taking part in a theatre project like no other I’ve ever encountered. For one week philosopher Michael Brady is doing a real-life ask me anything, willing to give any question – no matter how obscure – a go. While usually he is more likely to be found at the University of Glasgow, this week he is heading up Thought Club, one of the events hosted by the Tenancy project.

Tenancy is an exercise in living from Quarantine, the Manchester-based theatrical company that specialises in a dramatic methodology that is hard to pin down but leaves a lasting impression. 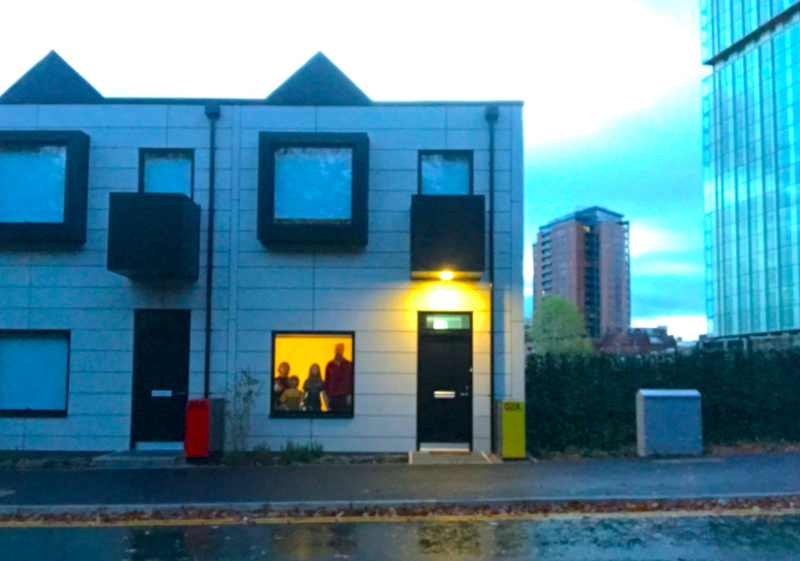 Director Richard Gregory told me: “Twenty years ago we started Quarantine from the spare bedroom of our council flat in what’s now called the Northern Quarter. Back then, there were around 2,000 people living in the city centre. Now there are, apparently, around 54,000, with projections of a city centre population of over 100,000 within ten years. As anyone can see, through the legs of the cranes, growth continues at a phenomenal rate. I learned to drive in Manchester and knew the centre like a taxi driver. I don’t recognise it. I see the positive aspects of change and I also have some questions about it.

“We decided to make Tenancy - to rent a brand new house for twelve months, to invite artists and others to live in it, get to know their neighbours, to organise a series of events and discussions - because we’re interested in what impact this rapid change is having on the cities of Manchester and Salford and the people who live there. Who’s behind it, who’s benefitting, who’s left out? What does neighbourliness look like in the shiny new city?”

Roughly six months into the project, the house has been home to visual artists, performance makers, photographer, a choreographer, each visiting for around a week and opening up to anyone who simply wants to talk. There have been one-off events too, such as Sing For Your Supper, where each guest had to prepare a song to sing a cappella during a meal, or Is Neighbourliness a Virtue? another meal, this time live streamed on Facebook, where three speakers presented ‘provocations’ on neighbourliness in between courses. In a nice corollary, one of the Facebook commenters lived across the road. 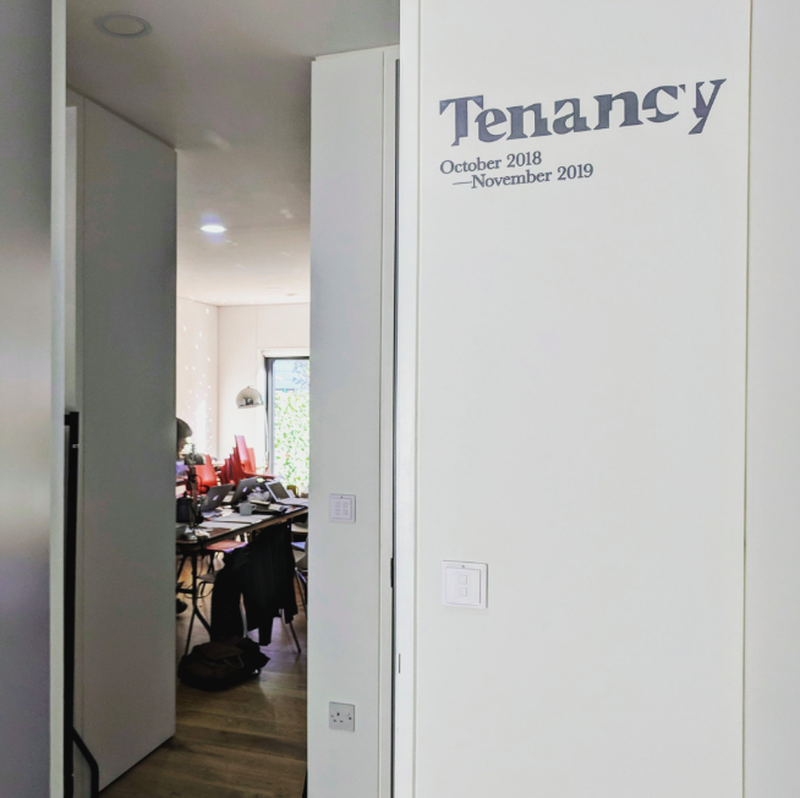 At first I’m nervous. The room is plain but stylishly furnished, like an office in a design agency. I feel like I’m here for an interview. But conversation soon starts to flow. Professor Brady does speak about some philosophical topics – pleasure and pain are recurring themes - but we also manage to talk about the development of Manchester, babies, novels, mental health and, always a favourite topic, where are good places to eat nearby.

Conversation is one of Quarantine’s great themes, as is exchange. Quarantine is a theatre company, but not quite as we know it. It was established by directors Richard Gregory and Renny O’Shea along with designer Simon Banaham over twenty years ago. In this time they’ve staged more than thirty pieces, in which ‘real’ people feature often, as does ‘real’ life.

If the idea of blurring the line between city and stage, performer and audience sounds familiar, you might recognise the themes from director Richard’s work in the last Manchester International Festival. The opening event, What is the City but The People, saw (extra)ordinary Mancunians, from refugees to aestheticians, take to an outsized catwalk in Piccadilly Gardens. While the concept was dreamed up with artist Jeremy Deller, the execution had Quarantine’s fingerprints all over it. You can see the ripples of the event in this year’s MIF: take Yoko Ono’s Bells for Peace or Rimini Protokoll’s Utopolis Manchester, which takes place in multiple locations across the city

Or perhaps you caught an instalment of the seven-hour quartet of works, Summer, Autumn, Winter, Spring which featured table tennis, clairvoyance, a woman with a terminal illness and nine expectant mothers. Just as in What Is The City, none of the cast members were trained actors. Maybe if you’ve been along to No Such Thing, a long-term work that involves free curry and conversation (Confidentials’ own Vicky Smith was a fan of the project). Of that particular project Gregory said, “It obeys all the rules of art. We’ve defined a place, what is going to happen and how we’re going to do it. It’s an exploration, an exchange.”

But what of the place that defines the project for Tenancy? Located on a former industrial brownfield site nest to the River Irwell, the Urban Splash HoUSe development has been credited with rejuvenating this part of Salford. However, it has also been criticised for sidestepping affordable housing requirements and claiming that council fees would make the project ‘unviable’.

For some there is an inherent contradiction at the heart of the project. The point of Tenancy is to question, and even criticise, the rapid change we see all around us: can new housing thrown up at speed ever let the slower organic growth of community catch up, and if it cannot, then what? In this way the project echoes the questions of many people: how easy will it be to forge relationships, meet neighbours, make friends?

There is a delicious artistic irony involved. Regeneration is often kick-started by the move of artists into areas that are not considered very desirable. As an area’s reputation for being hip and youthful grows, the developers move in and the artists move on, taking, some people say, their vibrancy with them. Tenancy presents an inversion of this model – the artists occupying (in both the sense of living in and taking over) an otherwise ready-for-sale house in order to inject some sense of community into this plot of ready-mades.

But Tenancy is no rebellious squat set-up. It is all with permission of Urban Splash, the owner of the house and indeed one of the sponsors of the project (it should be noted that Quarantine are paying rent for the property). Is the property developing giant just trying to buy in a bit of that elusive cool factor that its potential costumers are looking for? Or would it be more accurate to see this as an attempt by Quarantine to deliver an inoculation of creativity to this area, against the creeping soullessness that can plague mass housing projects?

Not far from the hoUSe development is the Paradise Works artists’ studio, set up in response to the lack of affordable space in this area. Again, Tom Bloxham is a major supporter of the project and, again, Urban Splash owns the Paradise Works building. Giving back to the arts is clearly a trend - other examples include Castlefield Gallery’s New Art Spaces project, which teams up artists with empty offices and retail units, and Bruntwood’s partnership with the Manchester School of Art.

Is big business finally being sensitive to some of the less tangible aspects of community development or is this a case of art-washing? Either way, considering the creative industry’s impact on Manchester’s economy (£4.4bn according to the council’s own report) these live-in creative projects look like a pretty sweet ROI.

Art’s relationship to the community is hardly new, but the concept seems to have been brought into sharper focus recently, with new Whitworth director Alastair Hudson proclaiming that the gallery’s mission statement is: "Art should address what matters in people's lives, respond to current urgencies and propose solutions to the issues around us." The Royal Exchange decided to tackle loneliness with a project set on top of a high-rise building.

While some may see the benefits the project brings to the area as intangible at best, others can attest to its direct impact. Jude, a creative producer and participant in the project, told me: “I signed up for a conversation with artist Steve Slater, not having a clue what that would entail but intrigued to find out more. It turned out to be part therapy, part careers advice, part networking, part just a lovely chat with a stranger (and all with a free brew, biscuits and a satsuma).

"I came out inspired and refreshed, with practical advice on how to market myself to new clients and added confidence on how to talk about my work as a creative producer. It’s made me much more open to the idea of trying some of their other events and reaffirmed my belief that it is good to talk in real life to other humans.”

Later, I contacted Michael Brady to find out what he thought of the project. He told me: “The conversations were, in terms of structure and often content, very different from the kinds of conversations I have with philosophers as part of my professional life. That was one of the things that attracted me to the project, and it seems to me that Quarantine have done something entirely original in putting on this form of engagement. But the conversations at Tenancy House together shared the important features of philosophical discussions wherever they occur: they were difficult, stimulating, awkward, enjoyable, tiring, exasperating, inspiring. Every conversation was a reminder that philosophy is something that we all do, in our every day thinking and reflection."

As for my own conversation with a philosopher, I’m not sure if the tensions in the housing situation were resolved, or if my own sense of neighbourliness was increased, but I felt like I had had a profound experience. This fairly conventional set of new-build houses turn out to be one of the most unorthodox theatres I’d ever entered. I came out with a new perspective on things that had been tangling up my brain for a while, but with more questions than ever before. That sounds like it fulfils Quarantine’s remit.

What’s next for the Tenancy project?