Last year, a battalion of ‘soldiers’ appeared in Manchester Piccadilly. Stock-still and silent, they handed out a card when approached: a name, age, regiment and the hashtag #wearehere. Unbeknownst to many at the time, this was an art installation by conceptual artist Jeremy Deller, commemorating the Battle of the Somme. Each person represented a man who lost their life on the first day of the fight.

It was simple yet profound, ordinary yet extraordinary, a stirring reminder that - despite being reduced to numbers in history books - each was a person just like ourselves.

What is the City but the People had a similar premise. Launching the 2017 edition of Manchester International Festival (MIF) last night, the free event saw 150 Mancunians take to a 100m catwalk in Piccadilly Gardens. Familiar faces abounded, from lead city centre councillor Pat Karney to punk journalist John Robb and Carl Austin-Behan; Manchester’s first openly gay Lord Mayor. Large screens at either end displayed captions, putting each in context: from acclaimed poet Lemn Sissay, who overcame a childhood in care to become Manchester University Chancellor, to performer Kate O’Donnell, who we learned was born Andrew.

Then there was Happy Mondays’ Mark Berry, who just did a silly dance. Good old Bez. 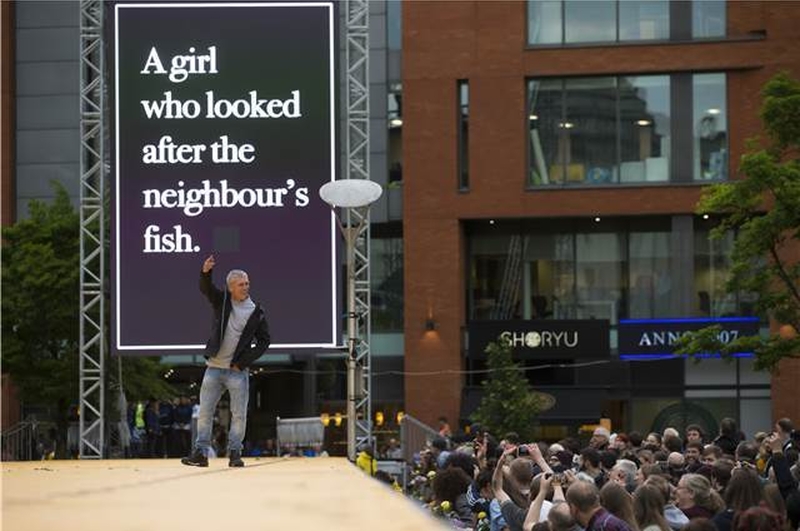 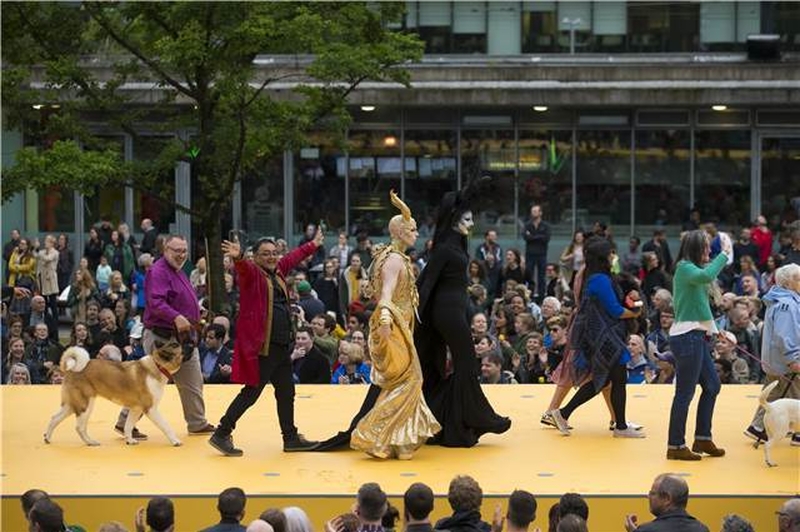 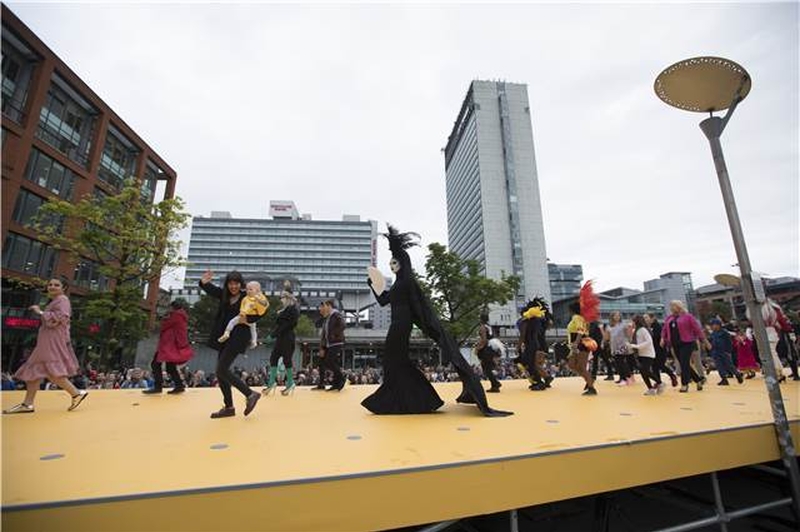 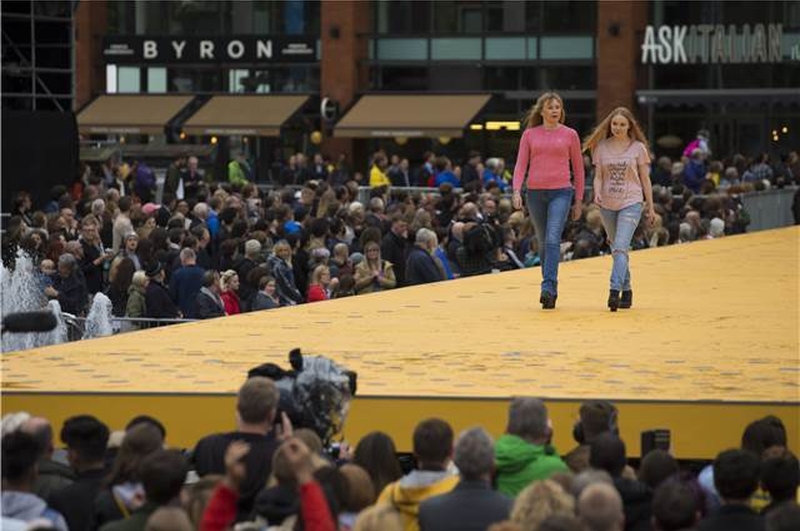 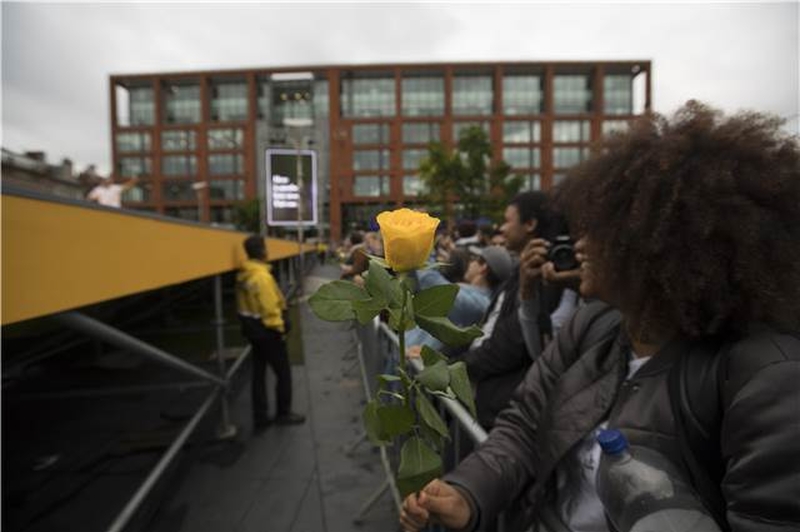 But it was far from just ‘celebs’ that took to the yellow runway for Deller’s ‘portrait of the city.’ From five-day old James, cradled in his mother’s arms, to 99-year-old Mickie (who once drove trucks through the likes of Palestine in the army), a diverse range of Manchester citizens strutted their stuff. Again, compelling captions revealed some incredible stories. Homeless Chris was unjustly imprisoned in Strangeways, Andy was raped and infected with HIV, Jehona’s mother was shot in front of her and she was left for dead herself.

Despite such harrowing tales, a sense of optimism and solidarity pervaded. Having ‘been through hell’ and overcome it, Andy now punched the air triumphantly - striding along with dog Buster to the cheers of the thousands-strong crowd - while Chris beamed his half-toothless grin throughout.

Not everyone had such a profound tale to tell, but they didn’t need to: it’s the everyday moments that glue life together after all, from Big Issue seller Stefan awaking at 6am each morning for his day’s work at Victoria Station to Bruce looking for love (his ‘blind date’ Frankie later walked down the catwalk much to everyone’s delight). Light-hearted, humorous moments like this were peppered throughout: brothers break danced, French florist David threw blooms into the crowds and Slattery’s bakers walked along loaded with sweet confections. 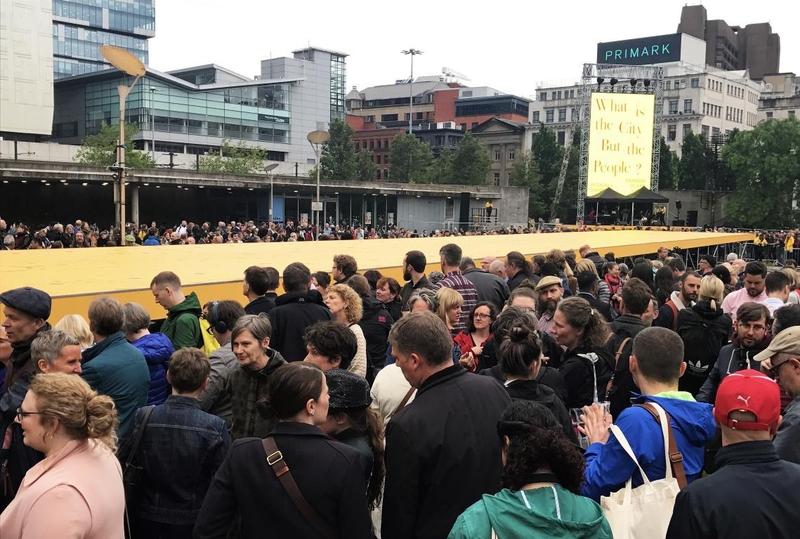 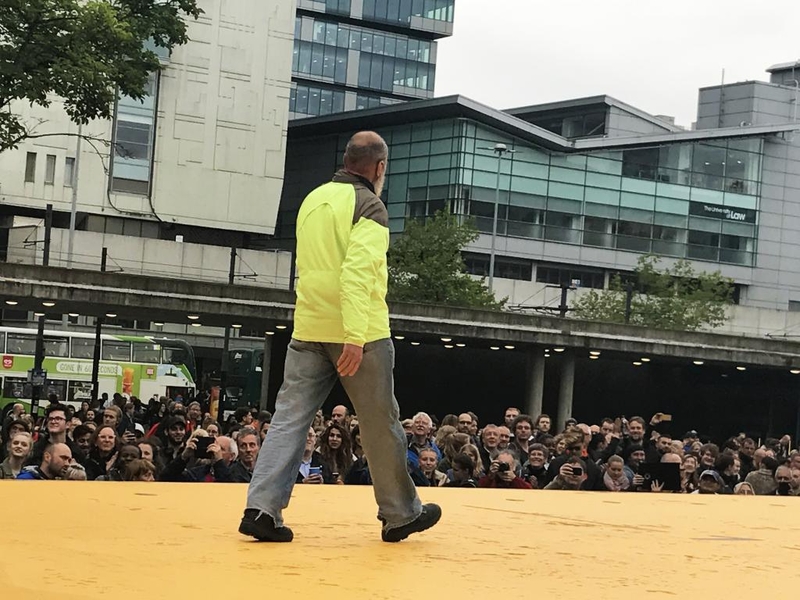 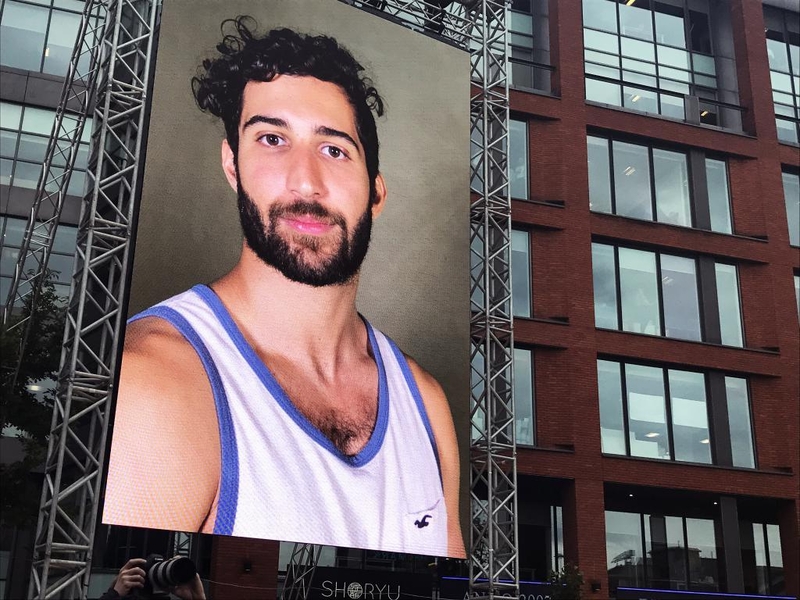 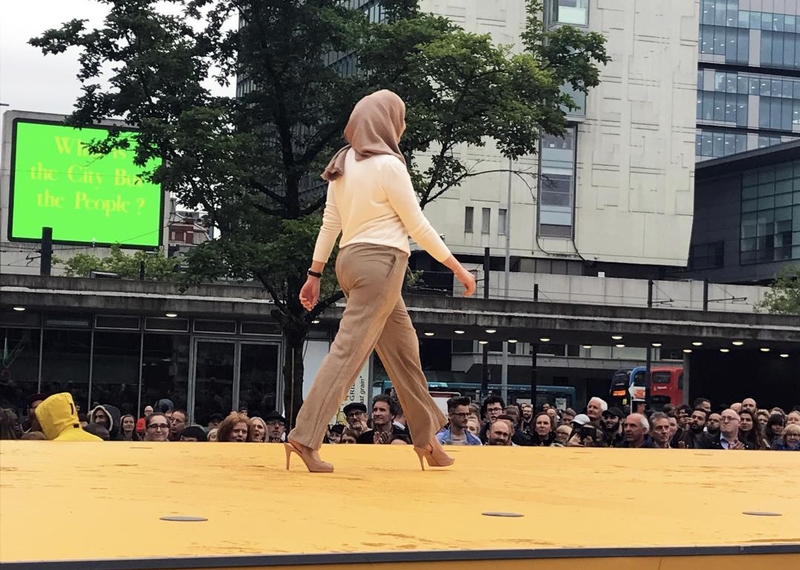 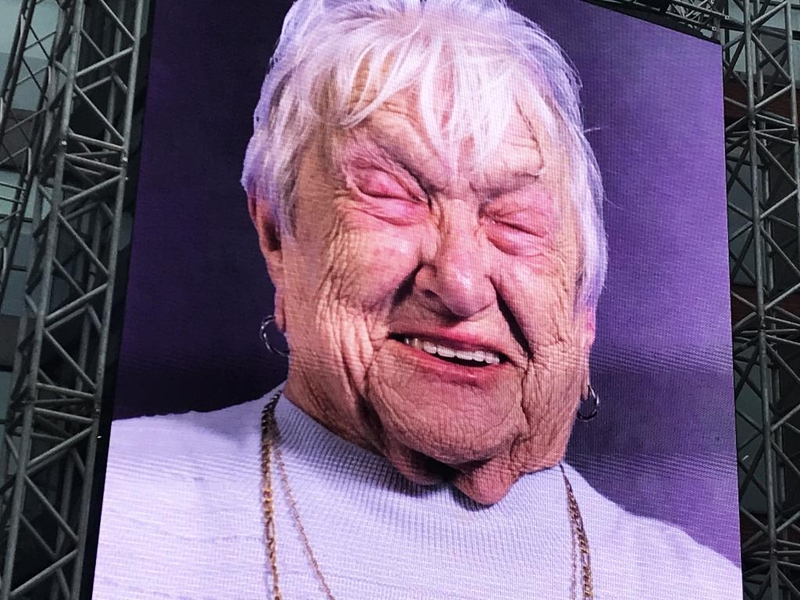 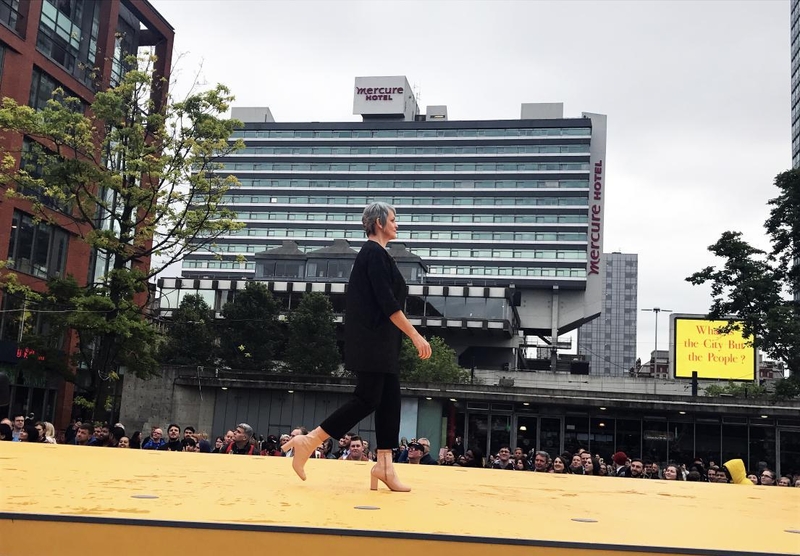 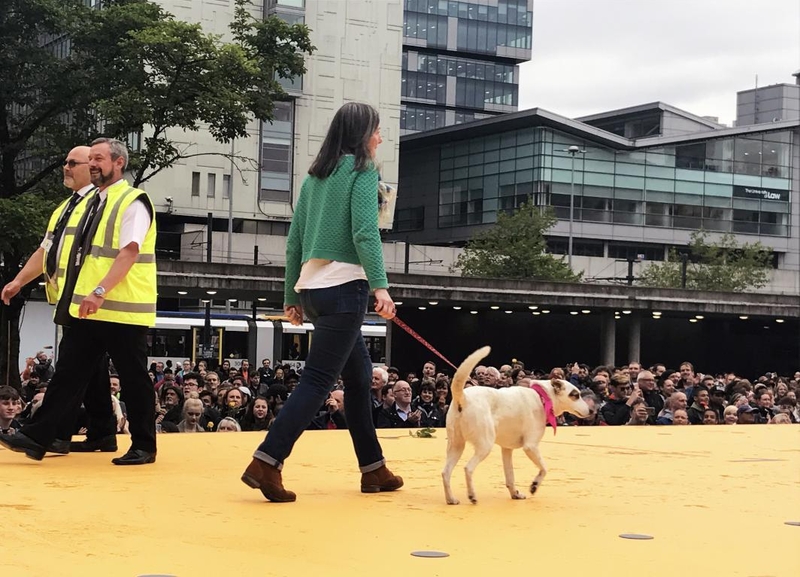 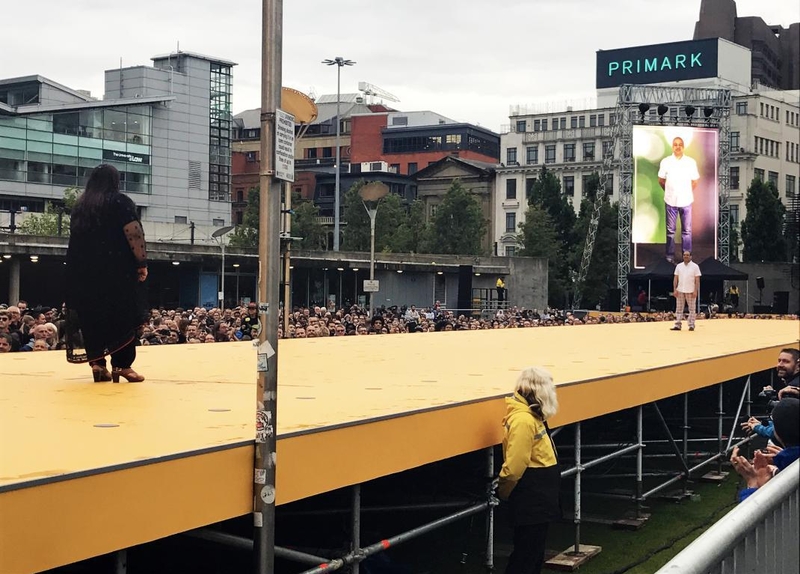 Captions were often tongue-in-cheek, too. ‘With one phone call, Nick can make all the traffic lights go green’ while one man’s love story - ‘to be continued’ - was later resumed, with his prospective partner cooking him up ‘the best chicken kebabs.’ Three kids, twenty years later, they’re still together.

Drag queens, dogs, beekeepers, children, protestors, preachers, wannabe Prime Ministers…all congregated together as the event came to a close, propelled along by an alternately ethereal-energetic soundtrack by 808 State’s Graham Massey. Cameras panned around the crowd, intimate portraits displayed on the big screens changing to reflect audience members in a clever reflection of Manchester oneness.

As Festival Director John McGrath said, ‘Manchester is a city that comes together….and loves its people. This piece feels like a celebration of that.’ Hear hear.

Watch the full event here, find out more about Manchester International Festival on the website or visit Confidential for festival reviews and updates. 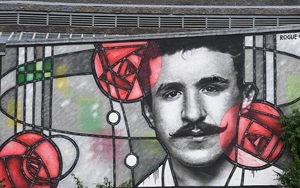