FISH restaurants excite me. Glad to have been the first to review Oystercatcher Chorlton and The Fisherman’s Table Marple, both absolute gems, yet still I yearn for a mackerel mecca, a brill idea, in the city centre.

The fish offering is matched by some clever meat takes

Livebait and fish! of yore? Both floundered. Randall and Aubin then? Never quite the catch it promised to be.

So Street Urchin, can you make a splash with your fish specials board and counter tray full of bright-eyed denizens of the deep? Ordering oysters, I was told they were rock, from Colchester and fresh in that morning. There’d been a rush on them over the weekend and chef Kevin Choudhary had headed over at dawn to restock from suppliers. 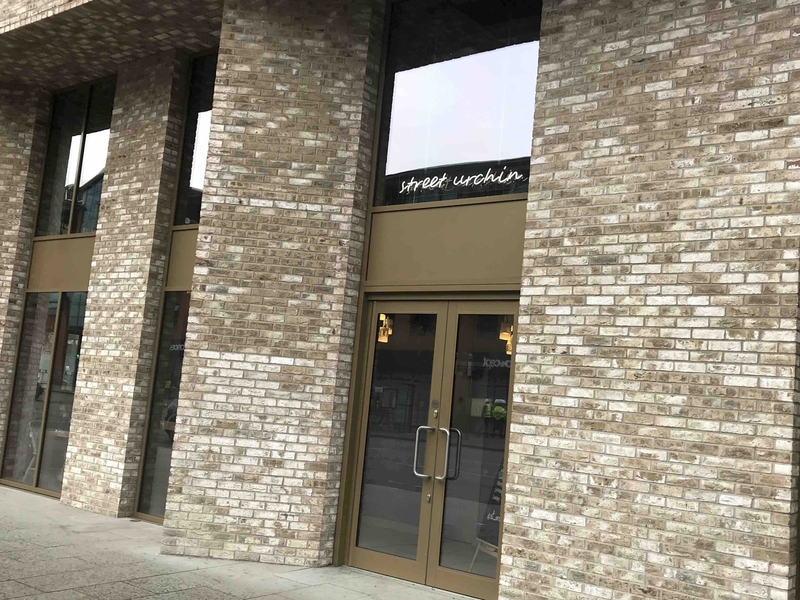 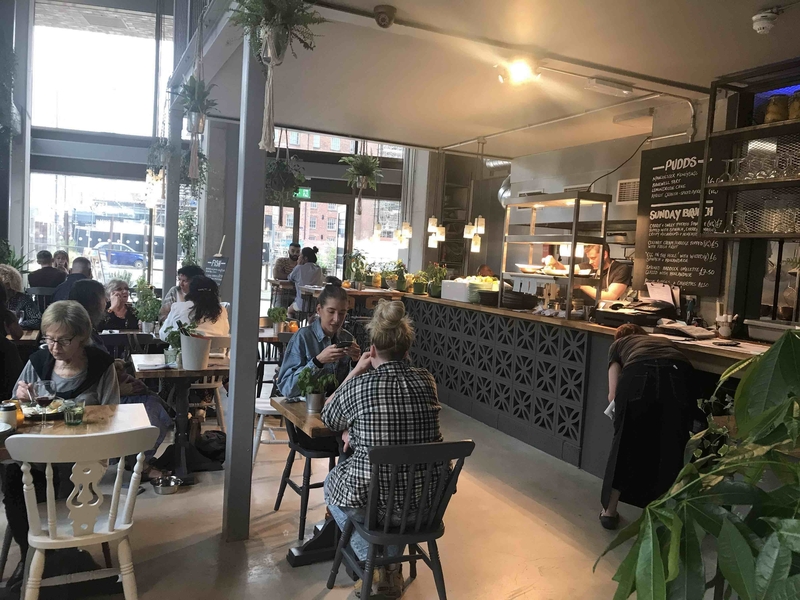 I’d no reason to disbelieve his wife Rachel, running front of house in this airy diner on the corner of Great Ancoats Street and Port Street, which opened with minimal fanfare a couple of weeks before.

Their original target had been the site now occupied by Nam in Cutting Room Square. That’s where the hyped action is. Perched on the edge of the Northern Quarter, family-run Street Urchin seems a step back from all this – to its benefit. There are one or two places in ‘new’ Ancoats feeling the competitive pinch as that cool ’hood develops so swiftly.

We’d made our way in via our local fave, Elnecot (chef/patron Michael Clay had been in Street Urchin that lunchtime, checking it out), Mana, (I was delivering some lemon verbena I’d promised them) and erst (biodynamic wine tasting from Austria’s Burgenland). Ancoats is such a village. I imagined down at Cotton Field Wharf, Pollen Bakery’s sourdough ‘mother’ pulsing purposefully in the July humidity.

By the time we crossed Great Ancoats Street I’d got it into my head I was going to Sea Urchin. Shades of Squid Ink opposite that failed to leave an indelible mark, vacating the premises for Viet Shack. This Urchin, though, looks smart enough to get on in life.

The Astley Building apartment block with its wan, freckly brickwork stands out from the crowd. The ground floor restaurant’s name is scrawled discreetly in neon on one of the double height windows. Inside there’s a riot of greenery, ferns dangling from buckets, herbs on every table, bowls of lemons, jars of home-made preserves. Table tops are made from sustainable woods, lampshades are mix and match retro. And, woo, barely a hipster in sight.

It’s crowded, though, most of its 35 covers taken. The Choudharys built up a loyal fan base while running The Victoria pub in Altrincham and you sense they are all piling in on the Metrolink to support the new venture.

Consequently Kevin and a miniscule team, minus a sous chef on the night, are working at full throttle, while Rachel is holding the service together with adroit charm.

Both the main menu and the fish menu are chalked up on boards, proper bistro style. Ambitiously the aim is to be a market-led diner with constantly changing menus. Even the wine offering will alter. The oysters prompted a bottle of Riesling from Marlborough New Zealand (home of that inferior grape, Sauvignon Blanc). At £43 the most expensive on the list, it offered lime, honey plus a hint of classic petrol on the nose. An absolute belter.

The rock oysters were £3 each (compared with Randall and Aubin £14 for 6) but worth the expense, while meltingly crustaceous crab cakes with sharp lemon and parsley mayo (£7.50) put to shame the usual breadcrumbed pucks.

It is soon obvious that the fish offering is matched by some clever meat takes – on the board you’ll find ox cheek poutine and curried goat pasties among the small plates plus a combo I’ve never come across before. And, yes, lamb belly spring rolls are well matched with gooseberry chutney (£7), but perhaps better paired with one of the beers they stock from Brightside of Radcliffe.

Already Kevin’s menu looks a marriage of two big influences – his fisherman father and legendary meat and game chef Robert Owen Brown, for whom he worked at Mr Thomas’s Chop House and at The Bridge. The Choudharys promise game will be on the menu in season. For the moment their hanger steak (£12.50), simply done with roasted tomatoes and garlic butter, makes a fine alternative to all that fish.

Though good, it is eclipsed by its two companion dishes, each served with Street Urchin’s homemade white bread – mussels in a creamy cider sauce (£7/£13.50) and, what we expect will become a signature dish, seafood bisque (£15).

The price should have given the game away. What arrives is not just concentrated shellfish broth, though that was there as an intense base. This dish threw the works in – mussels, squid, white fish, some of it battered. A pescatarian wet dream.

Perfection is a little way off, though. A whole sea bass (£12.50) doused in appealing parsley and pickled ginger butter, has spent too long on the busy pass and is overcooked, while a side of caper-dressed cauliflower is soggy rather than crispy as promised.

Minor quibbles both. The plan is for Street Urchin to expand into the mezzanine, nearly doubling capacity. This may well be needed sooner rather than later if this standard is maintained. 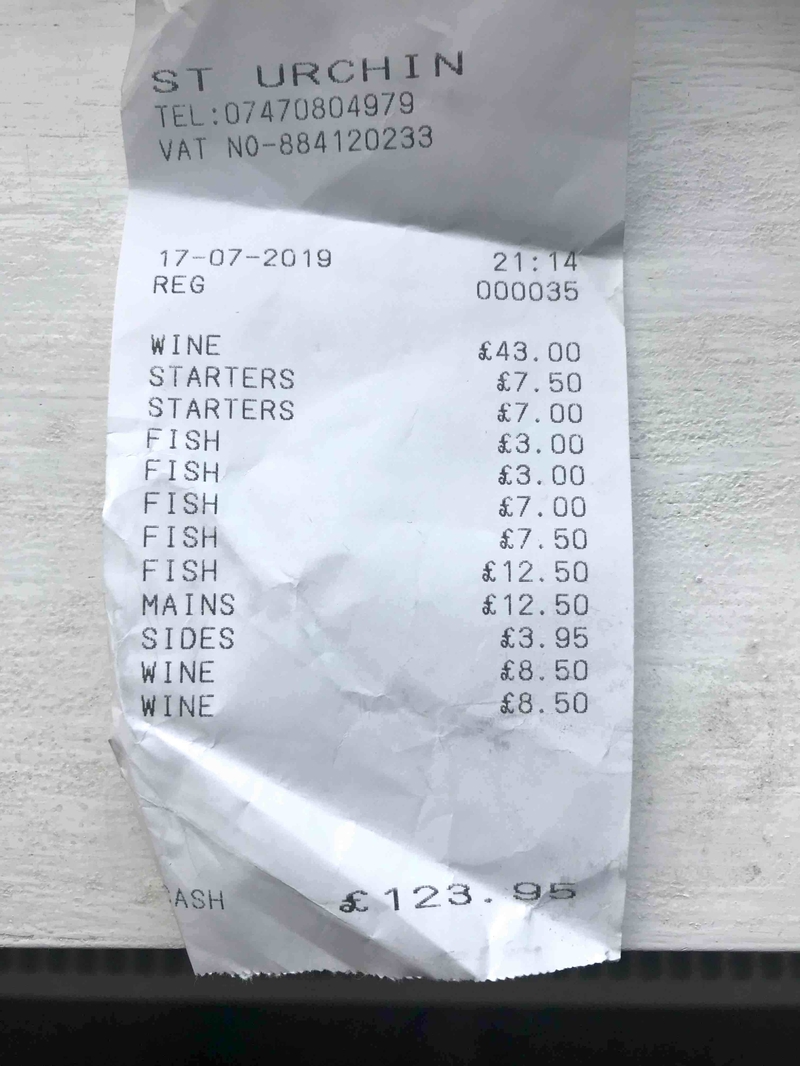