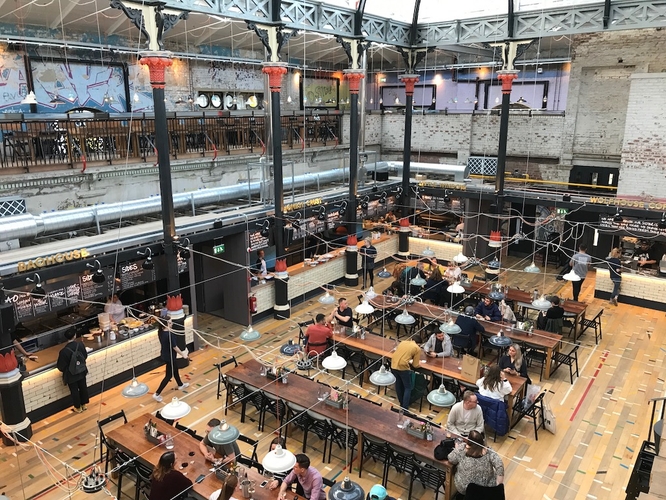 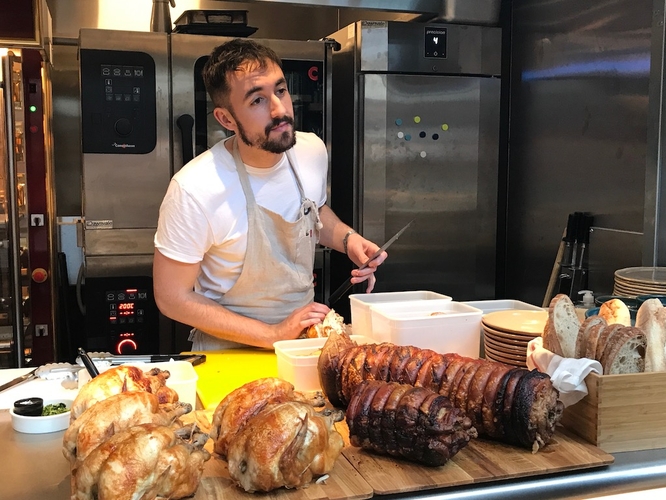 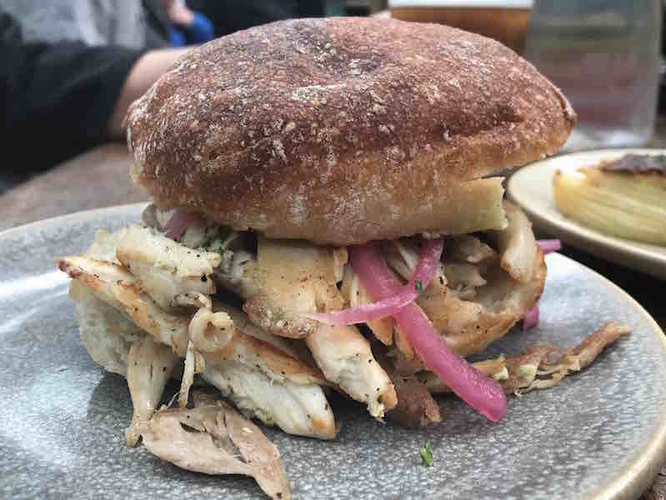 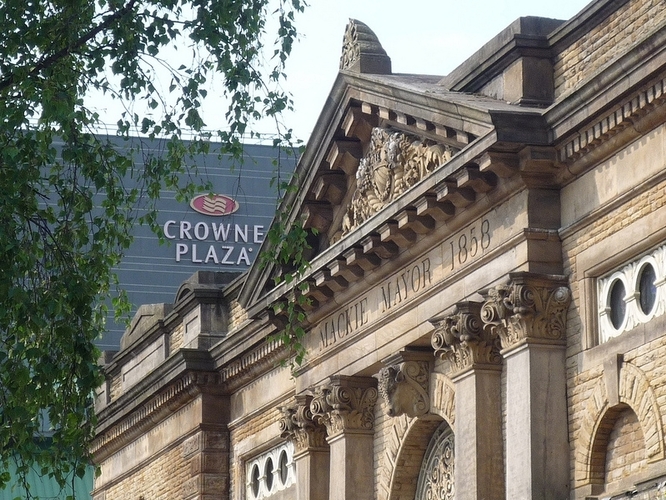 My favourite market in the world? Barcelona’s Boqueria. If I were one of those 450,000 Catalans who took to the streets this weekend to shake a fist at the harsh Madrid hegemony I’d surely have slipped away for half an hour to nibble and sip at one of the bars in this awesome food hub just off La Rambla.

Jammed full of amazing produce, it makes Bury Market look like a one-stop; fair enough, Barca is a major European city with a strong regional food identity. The whole sensory experience is overwhelming for anyone whose shopping instincts have been numbed by anodyne supermarkets.

And which would I prefer? Grabbing a quick chicken tikka and a cuppa at Morrison’s in-store cafe or a leisurely Pan Catalan and plate of boquerones with proper cava at El Quim de la Boqueria?

I was introduced to this legendary market cafe by Gerry Dawes, Hispanophile American food writer who first alerted the world beyond Spain to a certain El Bulli. So perhaps we got special treatment from his Boqueria buddies during a long, revelatory afternoon working our way through the menu and the wine list. Extra special because the raw materials were all around us in a working market.

That’s a plus, too, at Altrincham Market Hall on a smaller scale. Retail stalls outside sell fish, meat, veg and cheese to cart away. It all feels in context. Which brings us to Mackie Mayor, its new Northern Quarter offshoot, by a strange twist haunted by the ghosts of wholesale market men of yore.

The Mackie repeats the food hall formula of canteen-style, communal dining – place an order and it will be brought to your long table – but step outside here and you’re straight onto the charmless Swan Street pavement. Which was particularly squally the post-Brian Sunday lunchtime we dropped by.

Perfect timing, though. There for noon, post-breakfast, mid-brunch, when the proper lunch menu was coming on stream. It was busy but not manic for a newly unveiled project.

The clientele was a younger demographic than the (much smaller) mothership market, more beardy boys, as you’d expect but, as at Alty, families with toddlers and buggies, a significant canine presence. All relishing the buzz of this spectacular new destination. 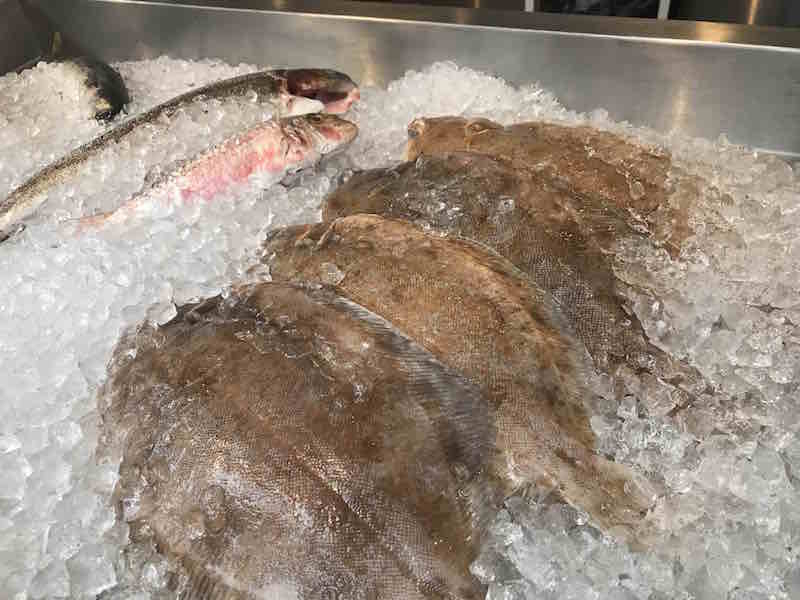 Our table neighbours, a gay couple in the restaurant trade, weren’t relishing paying £18 plus for a couple of mini-steamed buns – one filled with avocado, the other with belly pork – plus a tiny tub of kimchi from the Bao House, behind us. Mackie Mayor doesn’t come cheap in comparison with its street food competitors.

Still we are talking a roof over our heads and some fine food. On the opening night Bao House’s cornmeal-fried hake bao with pickled jalapenos, fermented red pepper, miso and aioli had been a playful, fusion treat, though barely a snack for £7.50.

Price caveats aside, it’s a marvellous addition to the city, a glorious space rescued and well utilised

The Bao House ‘brand’ was new to us. Turns out it’s a side-project of Alty stalwart  Wolfhouse Kitchen, which has made the leap across to the Mackie, along with Tender Cow, which has now begotten grilled fish dish newcomer Fin. So a certain amount of incest among the traders gathered by operators Nick Johnson and Jenny Thompson. Pizza aces Honest Crust have brought Market Hall sibling Little Window with them and doubled their pizza oven count. Reserve and Jack In The Box are again the respective wine and beer bars.

Bao House’s neighbours, Nationale 7, were ‘outsiders’ at Altrincham, serving up their French-style, free range rotisserie food in New Market Square. They well deserve their elevation at Mackie Mayor on the evidence of a pulled chicken sandwich; great, crusty bread, tarragon mayo, pickled red onions (£8.50) and - evidence of co-owners Emy Brémond and Amaury De Neury’s Gallic roots – a wodge of gratin dauphinois (£5.50), a mite dry for my liking but tasty.

I was excited about Fin, solely on account of its blackboard list of fresh, day boat caught whole fish, available to grill. Alas, it being Sunday perhaps and after a busy three days since opening, most had been chalked off; so from a choice of three in the ice tray, mackerel, red mullet and lemon sole, I went for the latter, accompanying it with some charred al dente broccoli. Levering the firm flesh off the bone, it didn’t disappoint, but at £21 was on the minnowy side.

Expecting it to take longer to arrive, we had also ordered a Panzanella (Tuscan bread salad) from Little Window – with burrata (£13.50 for a large plate) on the express orders of my editor. Yes, David, the burrata was a wobbly sphere of creaminess. The salad itself was juicy, dominated by sharp little heritage tomatoes and nutty extra virgin oil, but I tired of the surfeit of soggy bread cubes.

Price caveats aside, it’s all a marvellous addition to the city, a glorious space rescued and well utilised – a giant step up foodwise from the Arndale Market down the road with its mixed bag of lunch bite options and scattering of desultory fresh produce stalls.

Weekends are not the test of the Mackie Mayor’s success. It’s always going to be rammed then – and at evenings because the booze offering is good. The acid test will be how, on the Northern Quarter fringe, it attracts trade up Shudehill from 8am every Tuesday to Friday.

Meanwhile, and it’s only a pipe dream, wouldn’t it be wonderful if Manchester city centre could spawn more specialist food outlets – a quality cheese shop, a fishmonger’s, delis beyond (the rather excellent) Lunya and Harvey Nichols? Only then can we start to demand independence from the rest of the UK. Let’s call it Manxit.