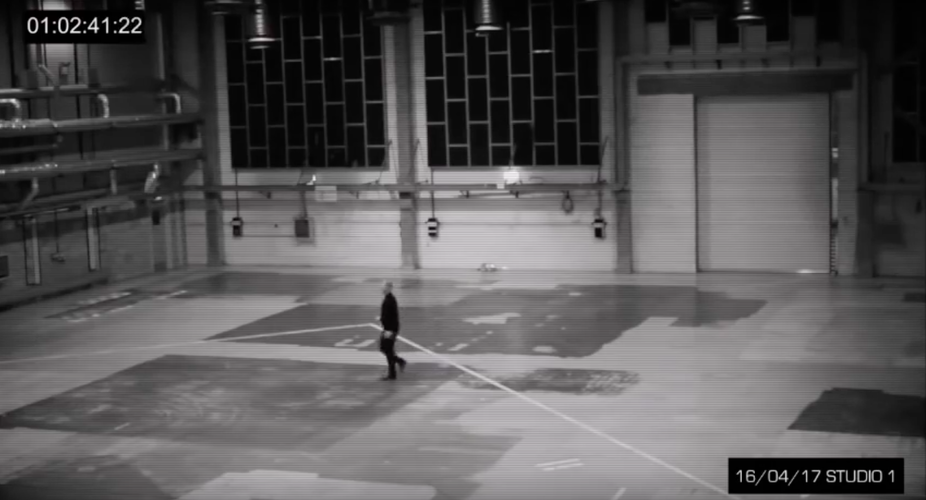 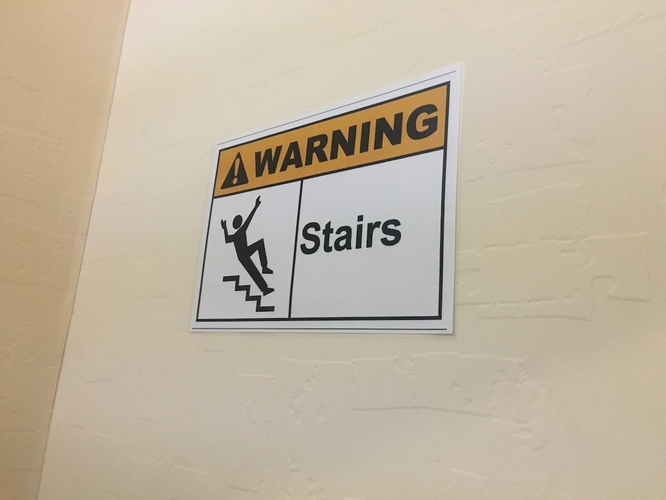 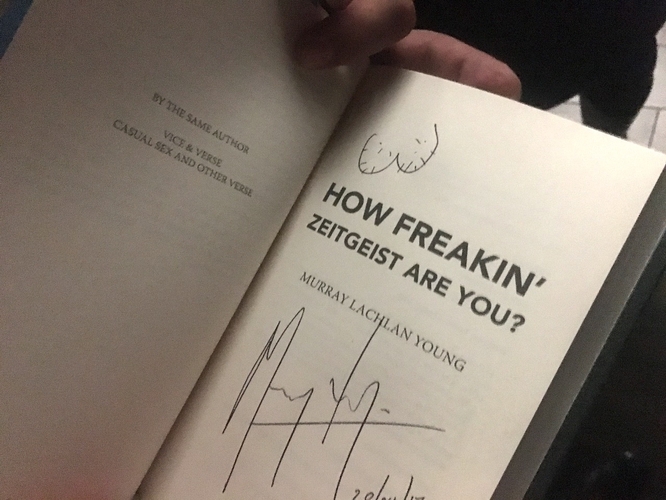 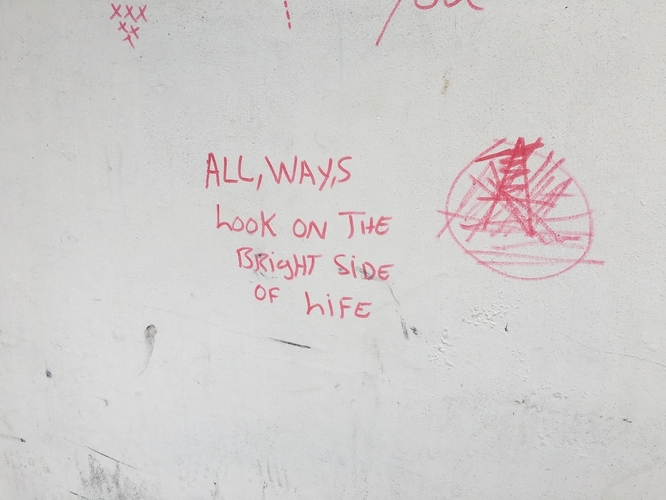 Week 16: in which Sleuth encounters a heavily bearded man... twice

Sleuth was at bijou but sweetly proportioned bar Wood & Co on Thursday. He was there to see a performance by the hilarious Murray Lachlan Young and then a signing of his collected poems How Freakin’ Zeitgeist Are You? At one point Young asked for requests and Sleuth was alarmed to hear the woman next to him bellow a single and unlikely word for a poetry reading: “Scrotum!” The lady turned out to one of the best Instagramers in the North, Susan Ferguson, ‘Scrotum’ turned out to be a poem by Young delivered in an entertaining Rabbie Burns style.

After the poetry, Sleuth bought one of Young’s books, he likes to encourage the arts. Susan Ferguson was buying a book at the same time. “Do you want a dedication?” asked Young. “Yes, just sign it and then draw me a scrotum,” said Ferguson. So he did. “Ooh, could you draw me a scrotum as well, when you sign my book,” said arts mover and shaker Catharine Braithwaite. So he did. “And you?” asked Young of Sleuth. “Just the name, thank you,” said Sleuth.

SLEUTH & THE TALLEST (BUT NOT THAT TALL) VIOLIST IN THE WORLD

Sleuth had an interesting chat with a PR person last week, who had called to promote the homecoming leg of violist Gregory Scott's tour at the Dancehouse Theatre (6 May). Scott, she said, was a former pupil of Altrincham Grammar School who began his career with the BBC Philharmonic, going on to bag a no.1 album in the UK classical chart and perform as a soloist with the Hong Kong Philharmonic.

“Not only that,” said the PR person, her voice perking up, “he’s also the tallest violist in the world.” “Oh right, well how tall is he?” asked Sleuth, caught off-guard by this odd deviation from Scott’s marketable talent. “Erm… it says here six foot five inches,” replied the PR. “Six foot five inches!” said Sleuth, “that might make him very tall in Hong Kong, but back here in Manchester that makes him only three inches taller than me, only two if you include my hat.” “Well I suppose violists must be small in general,” said the PR. “Well, has this been verified by the Guinness World Book of Records?” asked Sleuth. “No idea,” said the PR, who may or may not have been the PR-iest PR ever ever. Fact.

Sleuth received another interesting communication this week, this time from Radioactive PR, who wanted to tell Sleuth about some unusual paranormal activity going on beneath Man Con’s offices in Old Granada Studios. According to the email, organisers of the upcoming Granadaland wrap party had been forced to call in an exorcist after a tribute act refused to play unless something was done about alleged supernatural happenings. And, apparently, instead of saying, ‘Look mate, you’re only a bloody tribute act, either you do the gig or we book one of the other 473 Oasis tribute acts,’ bosses folded and brought in a priest (or a bloke from the office dressed in black) to pace around one the studios seemingly feeding a gaggle of ghost ducks. Which Sleuth reckons is just about the weirdest attempt to sell gig tickets he’s ever come across.

Oh, apparently one of the Granadaland tribute acts is Take That, so it could just be magic now, now, now (ah Sleuth had to, didn't he?).

Sleuth loves the Labour MP for Blackley and Broughton, Graham Stringer, who this week penned a piece for Confidential explaining why he was one of only thirteen MPs to vote against Theresa May’s call for a snap election (522 MPs voted in favour). Stringer has produced a number of engaging and often controversial columns for Confidential, ranging from the war in Afghanistan, to racism and the ‘myth’ of dyslexia (which made it onto Newsnight no less). But despite his lively copy, even Sleuth was surprised to see Stringer compare Labour’s current impotence to telling your partner they didn't have a fat arse. Telling a ‘white lie’, Stringer argues - in this case Labour's assurance that they're ready for government – should not let you 'lose touch of reality'.

Labour are currently 20 points behind in the polls… and yes your arse does look big in that, dear.

SLEUTH'S SAFETY ADVICE OF THE WEEK

Sleuth was in touch with the Yang Sing this week to hear more about plans for their upcoming 40th anniversary. Bonnie Yeung told Sleuth about her father’s new health and safety policy to prevent a repeat of the fires that have plagued them twice over the years. Harry has apparently consulted a Feng Shui master who has moved furniture around and strategically placed mirrors, vases and general nick-knackery around in an effort to stave off any embers. Yes, Sleuth thinks that should do it, as long as the Feng Shui master also moves all stoves into the alleyway out back and recommends they use a microwave instead.

SLEUTH’S HOTEL CONVERSATION OF THE WEEK

Sleuth loves to go into the hapless Britannia on Portland Street to gaze with longing at its utterly gorgeous iron staircase from the 1850s. Then it was a textile warehouse and now it is a shoddy hotel. As people were eyeing him peculiarly for videoing the staircase he overheard a snatch of conversation at reception. “My bedroom smells really bad, it’s awful,” said a customer. “Do you know what it is?” asked the receptionist. “I thought you might tell me,” said the customer, acidly.

Beautiful stairs from 1850 in the hapless Britannia on Portland Street from Manchester Confidential on Vimeo.

SLEUTH AND THE ORIGIN OF THE SMELL

Sleuth knows what that smell is. It’s the rotten corpse of London Road Fire Station which the Britannia Hotels group let moulder for almost thirty years and only now has a chance of an afterlife since they were forced to sell to Allied London.

SLEUTH’S HEALTH AND SAFETY NOTICE OF THE WEEK

This again in the Britannia Hotel. Sleuth wants to say 'it's health and safety gone mad', but now reckons those surprising stair-things have caused a lot of accidents as people run screaming from the awful smell in their rooms.

SLEUTH AND THE POWER OF POSITIVITY

Sleuth found this ungrammatical graffiti on the side of the Betfred bookies in Chinatown. He wonders if it’s a sign of success on the machines or a desperate attempt at optimism following a disaster. 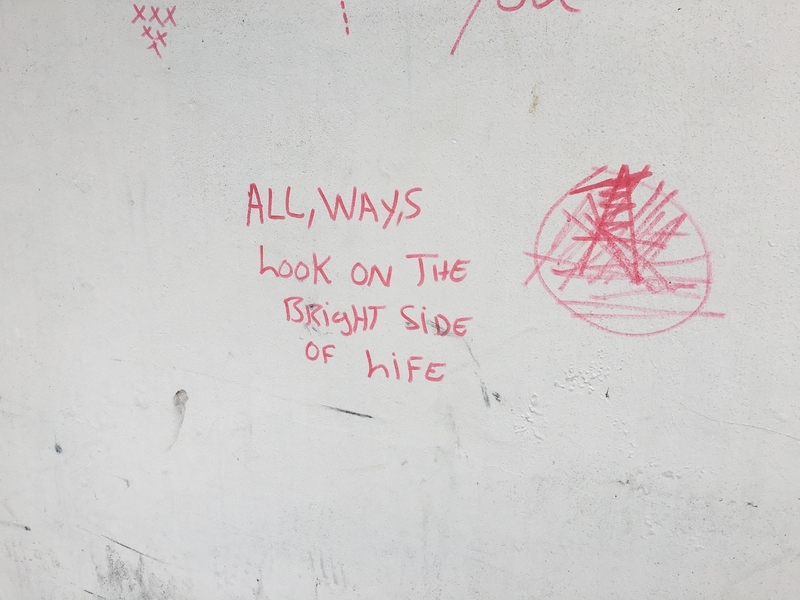 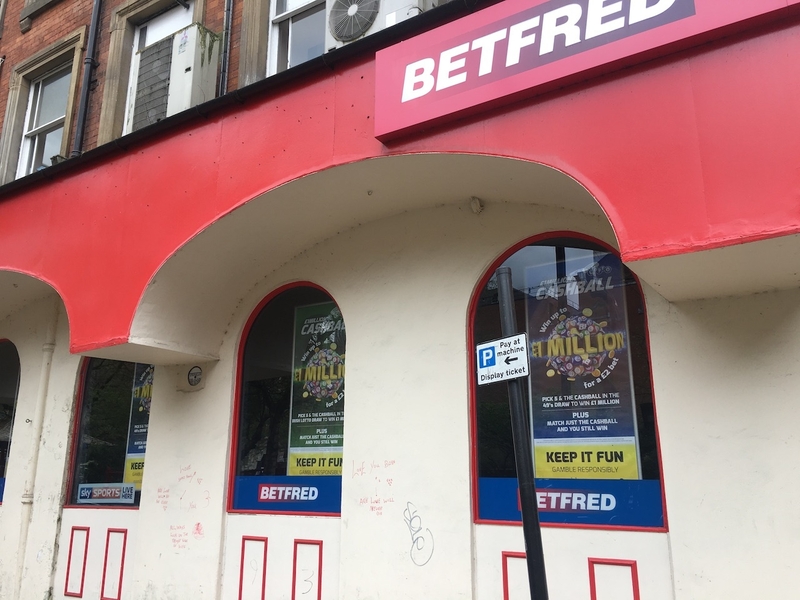