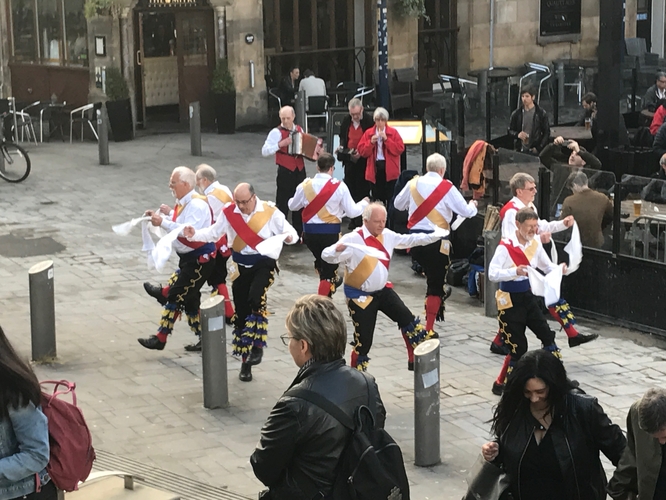 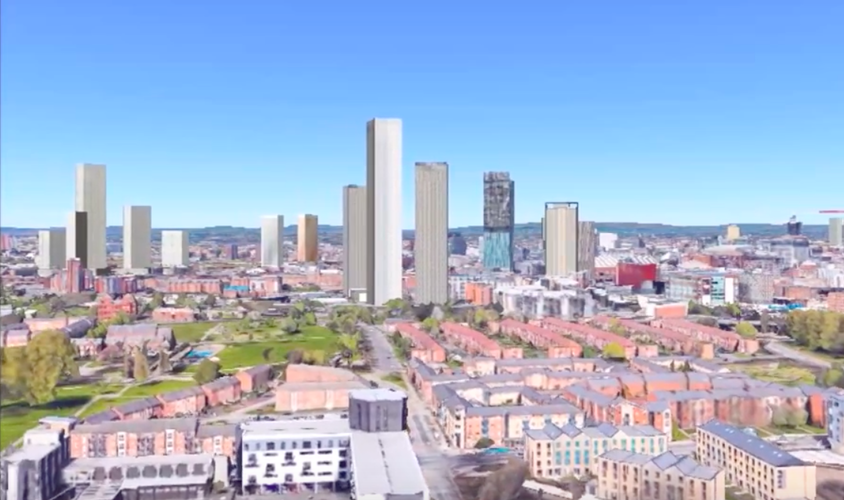 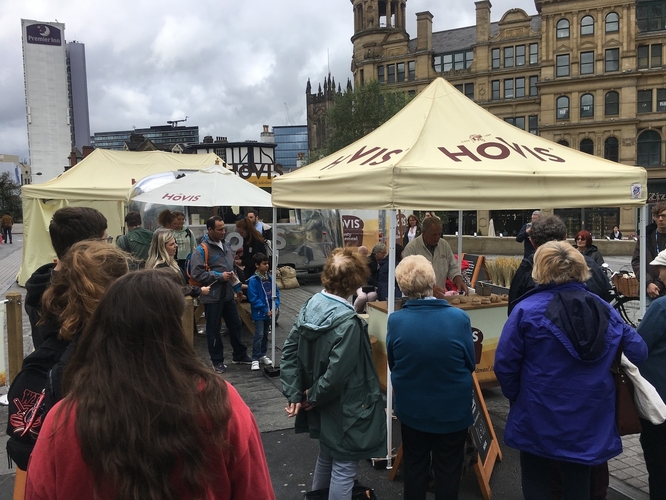 Week 23: in which Sleuth is visited by a bee

After a shock exit poll predicted healthy Labour gains, Sleuth found the jubilant Jeremy Corbyn, having sunk a few pints of £2 Taddys lager with his pals in Sinclairs Oyster Bar, celebrating on the Shambles alongside seven grey bearded replicants.

(This was actually the Manchester Morris Dancers doing a very noble thing indeed. Seeking to raise funds for the Manchester bomb emergency fund, these dashing chaps had taken to the streets to perform for donations. If you see this weekend 'em drop a few coins in.)

Further into Exchange Square, Sleuth saw this and thought 'oh no'. A bunch of crusties have taken over Exchange Square. Then he realized it was more sinister. It was the JeHovis Witnesses handing out the bread of heaven, the holygrain.

Sleuth hears Russian entrepreneur Mikhail Zelman is gearing up to bring his steakhouse brand, Zelman Meats, to Manchester. Sleuth thinks this is good timing. Manchester-Russian relations recently took a nosedive following a homophobic article by columnist Alisa Titsko (Titsko? Teehee) in Russia’s most popular tabloid, Komsomolskaya Pravda. Titsko (teehee) described the sight of Manchester’s gay people openly expressing their sexuality in the city's Gay Village as ‘disgusting’. So Sleuth is pleased that with the arrival of Zelman, at least one Russian man is still happy to flash his meat in public.

SLEUTH’S FLY-THROUGH OF THE WEEK

Sleuth enjoys a hypothetical fly through as much as the next person. This one of the rapidly growing Manchester skyline from Ed Howe on Place North West is very entertaining. Though Sleuth can't help but notice the missing Neville Towers on Albert's Square? Wishful thinking perhaps, though it has gone suspiciously quiet over there hasn't it?

Sleuth was rushing between jobs and grabbed a sandwich in Pret-a-manger. He was sat near the door when an antique beggar came in and pocketed from the self-dispensary all the sachet-packed seasoning and condiments he could grab. Sleuth watched as he strolled past the terrace table and chairs outside. A couple of mucky-pup groups had left all their rubbish on the table. Sleuth watched as the beggar came back and very precisely and neatly gathered all the rubbish from the Pret tables and put it in the nearby bin. Sugar for litter clearing, thought Sleuth, seemed a fair swap.

Sleuth was in the fabulous King’s Arms in Salford. Looking through the bar into the staff area, he saw an enigmatic sign chalked up on a board. It read: ‘Don’t trust men with curly hair.’ Sleuth asked why. The barmaid said, “I don’t know. It was there when I came in, maybe somebody did a runner with a perm.”

SLEUTH’S OVERHEARD CONVERSATION OF THE WEEK

This took place in the Town Hall Tavern. There were two men in the bay at the front of the pub. One said, “Look there’s a beer delivery van there advertising JW Lees beers on the side. It gives the Drinkaware campaign’s website.” “So what?” said his mate. The other man sighed and give his beer a long hard look. “I’m very drink aware,” he said, “I make myself aware of it every day.”

Stretford is not renowned for its food and drink offering because it simply doesn’t have one. There’s an Aldi and a Costa, and a vast Tesco but…er…that’s it. Oh, forgot, there’s the excellent Sip Club on Barton. This has now opened a sister place on Chester Road to eat and drink; Bistro 1116. There are a series of pop-ups and this month it’s Dr Sid’s Speakeasy called ‘Once upon a time in Stretford’. This runs until 2 July with prohibition era bar food and cocktails such as ‘the very dry’ martini, an Aviation and a Corpse Reviver. Of course there’ll be ‘a great soundtrack to enjoy’. Opening times are 6-11pm Wed-Sat and 12-4pm on Sunday with a cash bar. ‘Corpse reviver cocktail’, thinks Sleuth, that sounds about right for poor Stretford.

THE BEE WHO SAID HELLO

Sleuth was at a garden party this week, discussing the tragic attack on Manchester Arena last month and the remarkable reactions of Mancunians in the wake of the tragedy. Just at that moment, as the suns broke through the clouds, a little bee landed on Sleuth’s arm and rested there for awhile, grooming itself. Now Sleuth has never been one for divine providence, but for that moment at least, he felt calm. 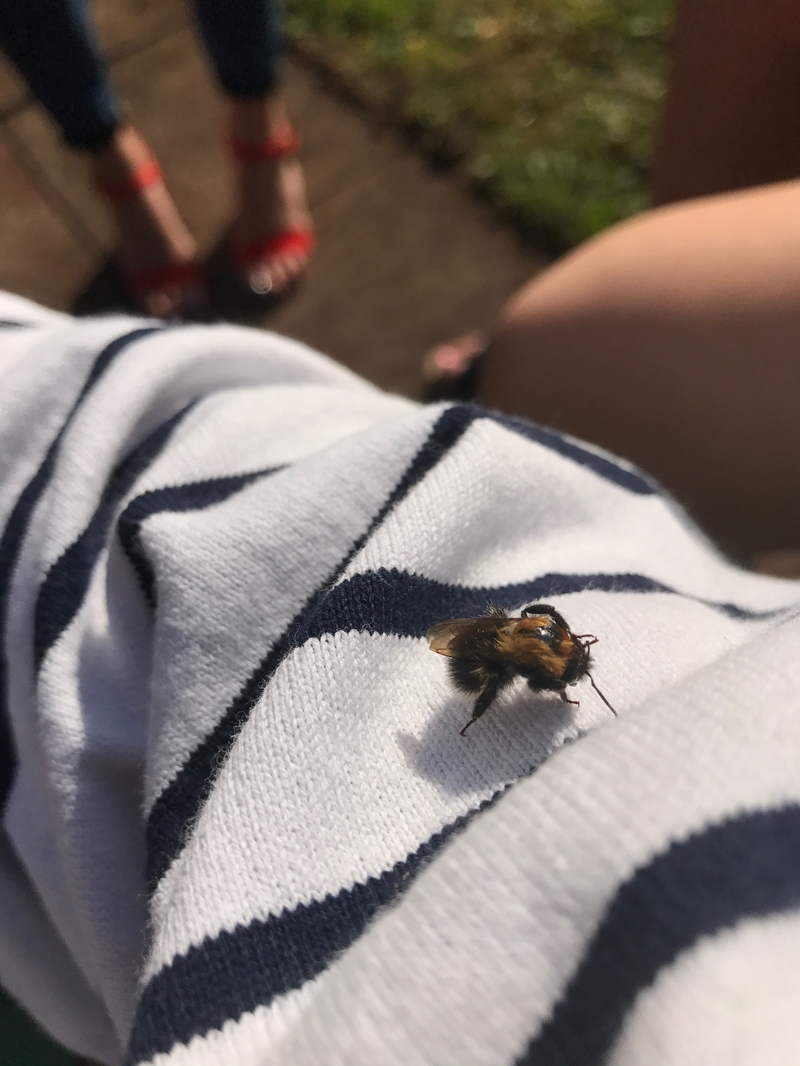