Week 17: In which Sleuth climbs on an empty bus and speaks in tongues

Sleuth was concerned this week that despite the French interest in Manchester there appeared to be nobody on the hop-on/hop-off new tourist bus. Then he saw the bus number which he believes refers to Manchester Tour 1 but simply says MT1. Oh dear. 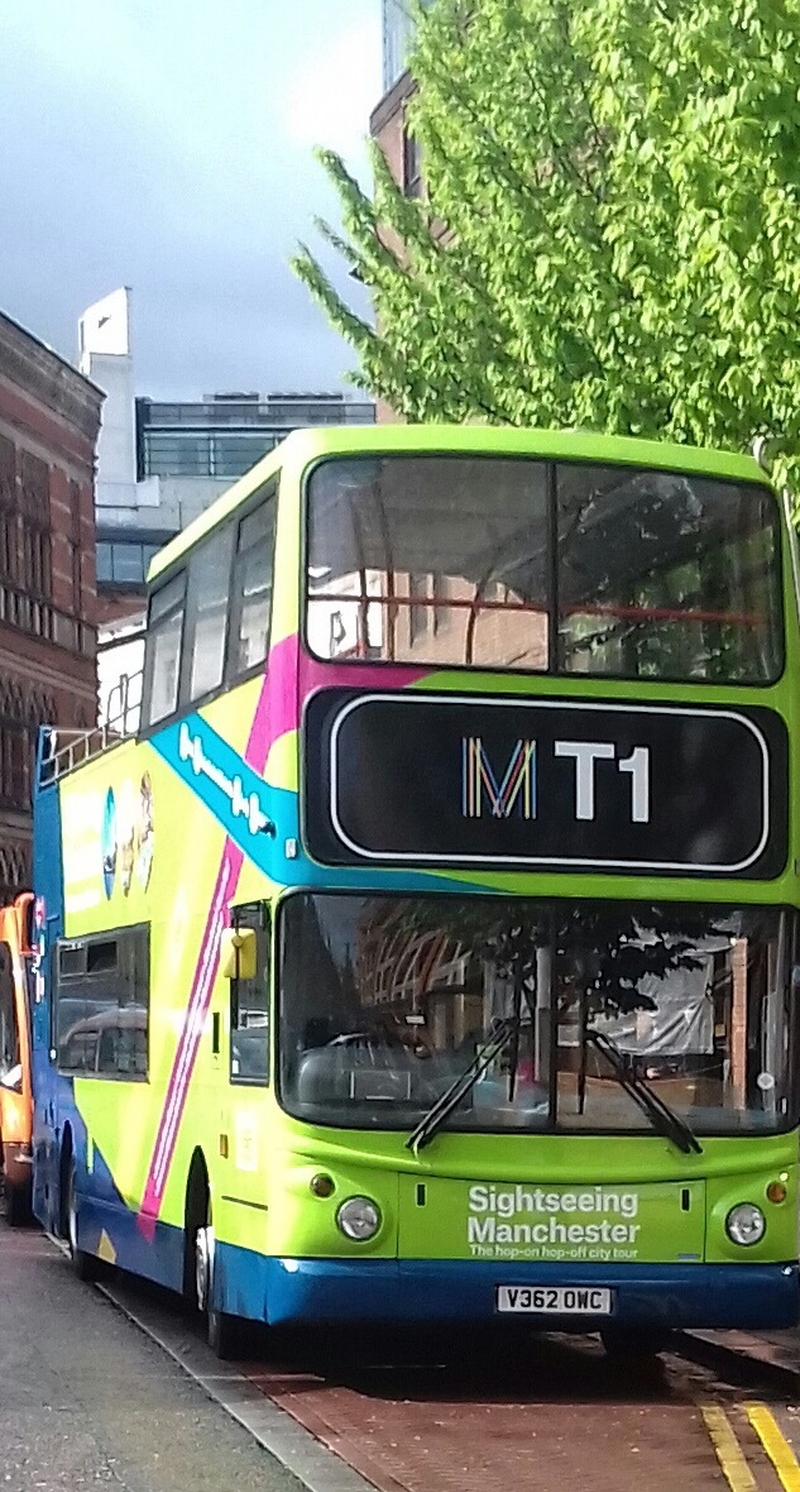 SLEUTH'S POLITE GRAFFITISTS OF THE WEEK

Sleuth has noticed that many people are repelled by the way Conservative cuts are hitting Northern and Midland cities such as Manchester and have decided to express their views on city landmarks. Here's some graffiti on that lovely work Touchstones by Kam Yasuda outside the Bridgewater Hall. It's graffiti politely applied in lipstick so it can be easily washed off. Clearly, these are reluctant vandals. They're gentle defacers. They're probably from Chorlton.

SLEUTH AND HOW TRINITY MIRROR THINK OF THEIR REGIONALS

Sleuth has a contact in the Liverpool Echo which is owned by the Trinity Mirror Group who also own the Manchester Evening News. Apparently in a recent meeting it was all about digital platforms and the print newspapers were referred to as 'legacy projects'. It's the poor trees Sleuth feels sorry for; how will they fulfil a role when all we have are a series of websites that continually freeze as we try to navigate around those juicy crime and celebrity stories?

SLEUTH AND THE MISUNDERSTANDING OF THE WEEK

Sleuth was walking around Chetham's Library and Medieval Buildings this week when a visitor rushed up to him. "Why did ex-students die for King and Coventry in World War 1?" she said. Sleuth investigated. "Ah," he said, "that memorial uses the old Latin 'v' for a 'u' and the inscription really says 'died for King and Country.'" "I wondered why Manchester boys had laid down their lives for a small Midlands city," the visitor said, "it just didn't make sense." Sleuth agreed it made no sense. He would never lay down his life for Coventry, even if he was sent there.

It was all going so well for Randall & Aubin. Like the spaghetti marinara and seafood platters, the huge old mirror ball has been a fixture in their Soho premises for two decades, so what better way of saying ‘Hello Manchester!’ when they open here on 23 May than a twinkly replica? Apparently we like shiny things up here and Randall & Aubin thought it perfect for their new site on Bridge Street, off Deansgate. Alas, the ceiling was a bit lower than expected and at over a metre in diameter, the heavy ball would have interfered with the heads of tall people. Thing is, they had to take out the window to get it in and have to take out the window to get it back out. They still want a mirror ball but it’s going to be smaller. Either way Sleuth thinks the idea reflects well on the restaurant and will reflect well on customers in a hundred different ways. 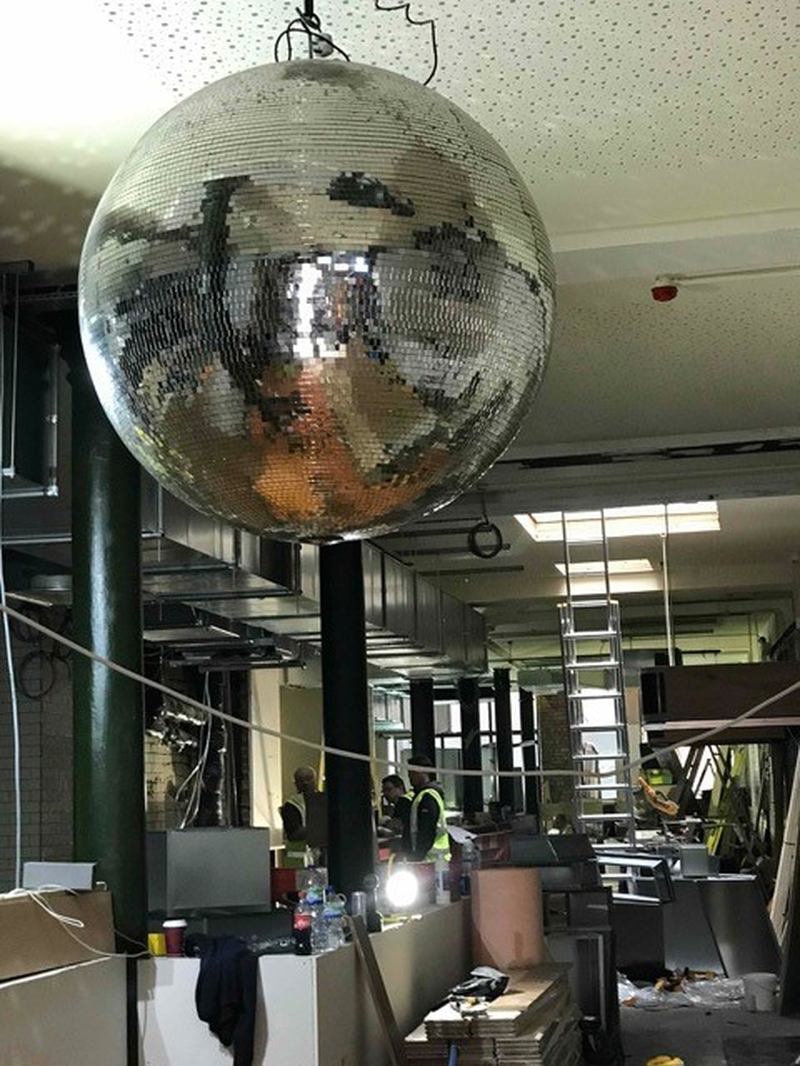 Sleuth is pleased to hear of yet another craft beer collaboration taking place in Manchester in order to tackle the city's worrying lack of craft beer options. Marble will team up with Invisible Man Brewery of Piccadilly archway No.473. The Invisible Man boss told Sleuth: "This collaboration has been on the cards for some time, though encountered a few setbacks when we arranged to meet and they couldn't find me.

"At first the guys from Marble were hesitant to collaborate, as they couldn't be 100% sure that I had a beard," he continued. "But when I showed them my tub of beard wax, collection of distressed grey t-shirts and all-year round ripped three-quarter shorts, they couldn't have been more keen."

SLEUTH'S COMEBACK OF THE WEEK

Sleuth found himself in London's Euston Station on Sunday, amongst hundreds of beaten but jolly Man City fans. The fans - having just watched their team beaten in extra time of an FA Cup semi-final at Wembley - were entertaining themselves with poetic renditions of 'London's a shit hole, I want to go home', when one proud, flustered Londoner bellowed, "Fuck off back up North and enjoy your benefits." He was stood next to the Burger King counter munching a Whopper which didn’t fit with his words somehow.

The train back to Manchester was filled with a caravan of intoxicated fans stomping up and down the aisles looking for beer (Sleuth didn't have the heart to tell them the train had earlier been announced 'dry'). Sleuth's favourite chap was a 6ft 7in man called Wally, who fell into the laps of no less than three people in Sleuth's carriage. Turning to Sleuth from across the aisle, one City fan said: "That's my mate Wally, I'm keeping a low profile because if he sees me he'll want one of these beers I’ve hidden under the seat.” “Big lad isn't he?" said Sleuth, "but is he really called Wally?" "Nah," said the fan, "we just call him that because of his size and because he tends to get lost. Fortunately, he’s so tall we always find him. He gets his name because it’s not Where’s Wally but There's Wally."