Shock as Manchester has some weather + Is this the worst artwork ever?

Sleuth week 9: 'Beast from the East' is actually just Wednesday

Sleuth was with a group of foreign guests on Wednesday. He remarked how the weather here was being called 'The Beast From The East'. “In Sweden we call it The Snow Cannon,” said the Swede. “In France it’s Siberian Freeze,” said the French woman. The Finnish man looked up and said, “In Finland we call it Wednesday.”

Beetham Tower has officially been named the UK’s ‘most annoying building to walk past in high winds’ following the arrival of the ‘Beast from the East’.

The storm, which hit the city on Tuesday, has so far claimed 47 woolly hats, seven small dogs and three baffled Chinese tourists who had been on their way to the MOSI but were scooped up by the wind and later found in Marple.

An architect told Sleuth that during the design process it was made clear that “nobody should be able to walk past the building in any wind above 20km without being in some way irritated and then putting their irritation on social media.”

“We have worked really hard to make sure that conditions are as windy as possible,” he said, “we have done this by harnessing the downdraught effect. Our aim is make conditions so unbearable outside the building that people are forced to escape inside and buy an overpriced cocktail in Cloud 23. Being in Cloud 23 is also the only way to ensure you can't hear the building's top fin groaning very very loudly.”

Sleuth hears new restaurant 20 Stories has stored a specially commissioned artwork in a locked room and thrown away the key. No wonder. The painting shows a Christ-like Aidan Byrne, head chef at the new Spinningfields venue, surrounded by nineteen famous people associated with Manchester.

We asked professional art critic, the late Brian Sewell, what he thought of it. “Quintessentially, it’s shit,” he said.

Sleuth heard that the usually fine art collective, Nomad Clan, couldn’t find the real individuals involved to sit for it so they hired some of those look-a-like models and painted them instead. As always is the case, none of them looked remotely like who they were supposed to.

Sleuth wonders who the hell most of these people are. Is that really Andy Burnham to the left of St Byrne? Or is it George Lazenby as Bond in the movie On Her Majesty’s Secret Service? Could that be Noel... and Liam... what's wrong with his face?

Worse though is the tokenism. Only three women including Maxine Peake, looking as though she’s had a terrible cosmetic surgery disaster and as though she's never seen a bald Scouser before. Then there’s Corrie's Michelle Keegan - bless, but why? And then there’s that famous Mancunian, Arianna Grande. How shameless is that? Forget all the other incredibly important Manchester women.

Worse again is the black chap on the extreme right hand side. Who is he and why is he the only person of colour included? Oh and finally, why isn’t Sleuth in there?

Come back Ray, all is forgiven

The painting brought to Sleuth's mind that peculiar mural painted on the wall of Brasserie Blanc, now Grafene restaurant, some years back. The painting depicted the great chef surrounded by a number of renowned Mancunians, including JFK, Marilyn Monroe and The Beatles.

Sleuth spoke to Raymond Blanc. He said: "I know ours was bad, but at least we were taking ze piss." 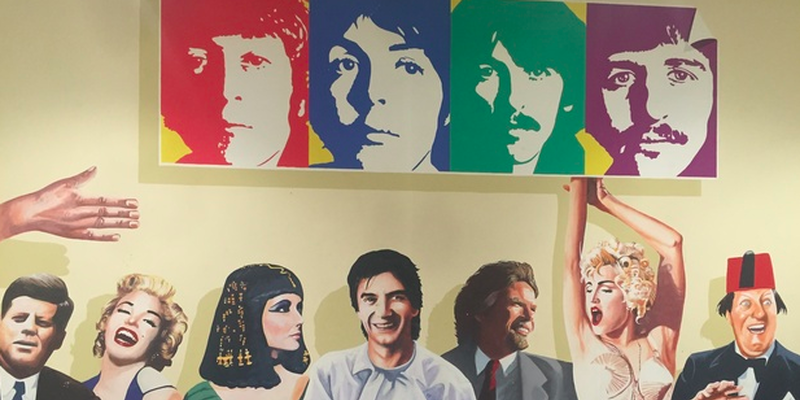 Sleuth was at the Boutinot wine event at Lancashire Cricket Club this week. He loves wine, and he loves drinking it. But sometimes he can’t do the serious wine critiquing. Or for that matter, spitting the wine out. But he had his wine notes book and he had his pen. He decided he needed to show he was busy. Justify his presence. So after one particular slurp he wrote something down.

“Ooh,” said a woman from one of the city restaurants, “Let’s see what you’ve written.” “Er,” said Sleuth, “I’m not sure I want to show you.” “Oh, go on,” she said. Sleuth showed her what he'd written: ‘As vicious as a cornered stoat.’ “What?” exclaimed the woman, but Sleuth was gone, shouting as he went. “I just can’t find as many adjectives as you lot.” He found a pub, had Holt’s bitter and calmed down.

US goth rocker Marilyn Manson has given up his music career in the states to begin a cobbling apprenticeship at Barton Arcade’s bespoke men’s footwear store, Jeffrey West.

Speaking to Sleuth, Manson said he’d “had it up to here with all that perverted hardcore rock” and would instead spend the rest of his days “sipping sherry and mending leopard print wrinkle pickers”. 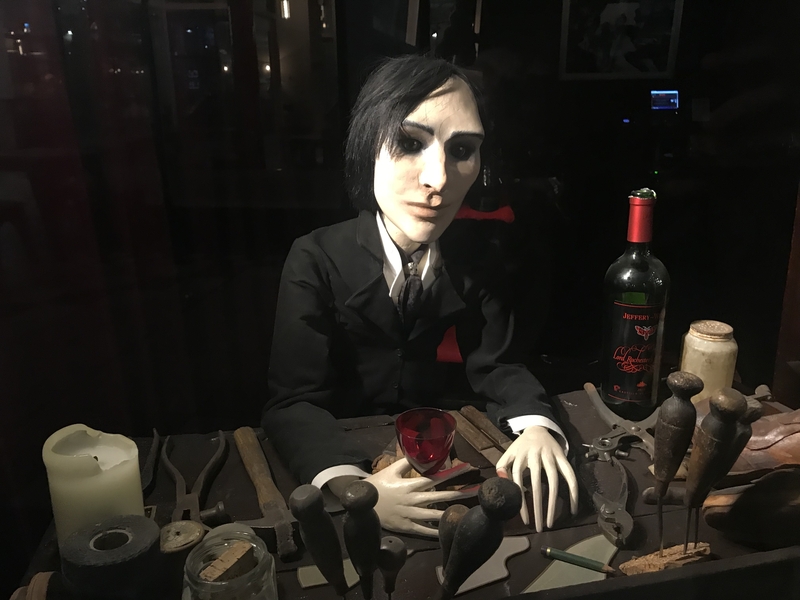