IF YOU haven’t been reading Gordo recently, you may have missed his current obsession with asking for authenticity in cuisines. Like the Editor, Gordo has a dislike of ‘twists’ on things.

Pintxos are the snacks found in bars across San Sebastian amongst other places, normally small slices of bread loaded with tuck. It’s a bit like those Swedish open sandwiches, but these have flavour.

The number of chefs in the UK who are capable of taking an original classic recipe and put a successful ‘twist’ on it is tiny. They are as rare as hen’s teeth.

Last night Gordo took a recipe from the 1800's, ‘a port and claret grayve for a fat ducke’, replicated it faithfully and was rewarded with a strong, beautiful, sexy mouth experience. No 'twist' was needed and it would be a top seller in any restaurant today. It took eight minutes. Mind you, that’s not counting the time it took to make Heston Blumenthal’s brown chicken stock (three days and four hours, not counting the wait for a full moon so it could bathe in moonbeams for half an hour).

Another Gordo gripe is a new restaurant that hasn’t reined in the half-wit marketing department who, for example, stamp all their paperwork with bold statements like 'THE BEST STEAK IN MANCHESTER’. No it’s fucking not and Gordo for one will crucify you for it. 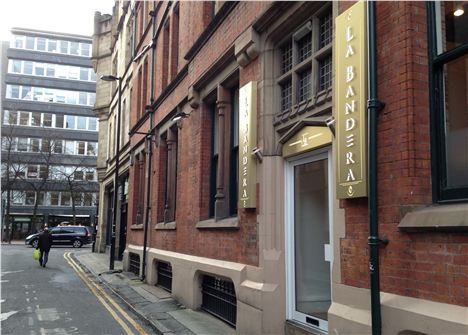 The Fat One was asked by the Assistant Editor to take a look at a new arrival that landed just before Xmas, La Bandera. It’s on the former site of Harpers and later the woeful 2 Kozy restaurant, just off Deansgate on Ridgefield.

Gordo could tell a fabulous tale about a meeting held at Harpers in the early 70s between his Dad, Shady, Kenny ‘Mad Man’ Pilkington and three gentlemen from South London, with a much fitter, younger and bored Gordo sitting on the table behind.

The boredom disappeared when someone got hit with the blunt end of an axe, ‘to calm him down a bit’, as Shady put it. Gordo, fresh out of a very nice Grammar School, nearly passed out with shock, but he will save that story for the book.

All the villains used to use Harpers as a meeting place, unless they were looking for ‘straight readies’ (i.e. normal bank notes untainted with explosives residue), in which case they'd head to Sam’s Chop House on Friday afternoon where the local banking senior management could be found bladdered at four o’clock. 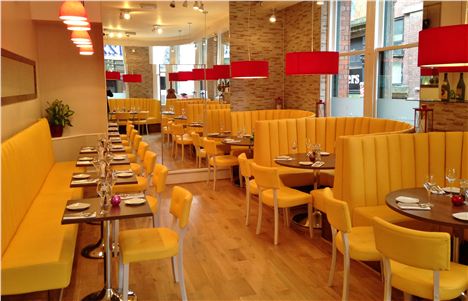 So, it was with a sense of déjà vu that Gordo walked up the steps to La Bandera, and not a few twitches.

The place today is very different. To the left is a cocktail bar with tall tables designed for standing the way you do in the pintxo bars in San Sebastian. To the right, the restaurant proper. It’s very yellow. It looks like it’s been designed by someone on a tight budget with a banana fetish. The whole restaurant has a wipe clean feel to it, not unlike the many restaurants on the strip behind Gordo’s favourite hotel in Bilbao, The Carlton. It’s not necessarily a bad thing.

The front of house is, however, is very easy on the eyes and an utterly delightful young Spanish woman welcoming diners on arrival. Gordo picks a booth and is joined by editor Jonathan Schofield. Having lived in Madrid he is useful in these matters.

The tapas and pintxos look good. Pintxos, which you probably know, are the snacks found in bars across San Sebastian amongst other places, normally small slices of bread loaded with tuck. It’s a bit like those Swedish open sandwiches, but these have flavour.

The menu is very Spanish (odd for a Spanish restaurant - Ed.). There are seventeen ‘Entrantes’, Tortilla Española (£4.75) is a dish that demonstrates ability in the kitchen. Both Schofield and Gordo consider themselves experts in the dish; normally they disagree. They need to be fresh, just cooked, warm, not hot, never cold and NEVER MICROWAVED. Egg and milk and potato, maybe a touch of garlic. Light but substantial. Both agreed; these were very good. 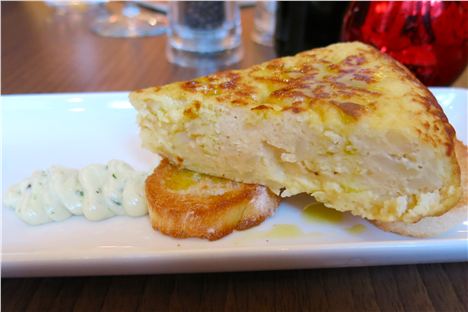 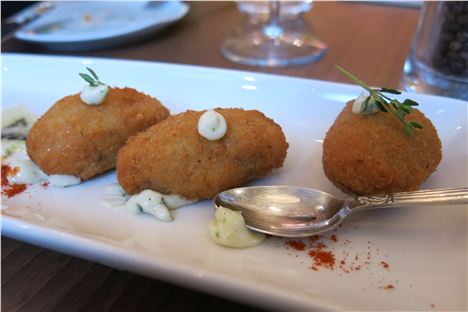 Croquetas de Mejillón (mussels, £5.95) came on the half shell and looked like they weren’t until you bite in and find out. These would be perfect but were a touch too light on seasoning; maybe a squeeze of lemon into the bechamal, though far from traditional, would liven things up. Rabas de Calamar (deep fried squid, £6.50) were bang on the money, these guys hadn’t seen a freezer and were judged just right to give bite with flavour.

Gambas al Ajillo (King prawns with garlic and parsley £7.95) again showed great class, the prawns tender and interesting. Too much garlic for Gordo, but that’s a matter of taste. Great bread dipping stuff though. 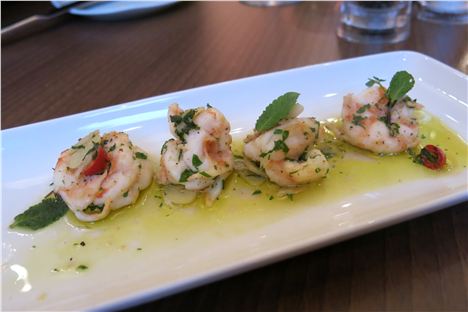 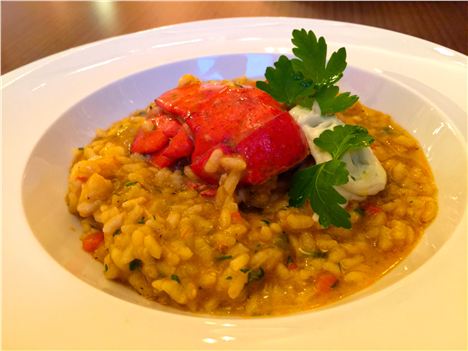 Arros Caldoso de Bogavante (rice with lobster cooked in a seafood broth £19.95) needs a little more work, being a tad too wet. Three or four more minutes on the stove would have seen the rice plump up a little more to mellow the broth. The thinking here is more risotto (yes yes, calm down) than soup. Quality of ingredients again were high, which shined through all the food.

Finally, a let down. The suckling pig (£20.95, minimum 2 people) wasn’t right. Dry, underwhelmingly seasoned, it had been reheated and it showed. The skin was patchy, it should be crisp with a layer of creamy fat beneath, the meat tender and succulent. It wasn’t. It looked bloody good though.

A side of Patatas salteadas (sautee potatoes with parsley garlic and onions £3.50), worked too, and the house salad (£2.95) - like Gordo - came well dressed. 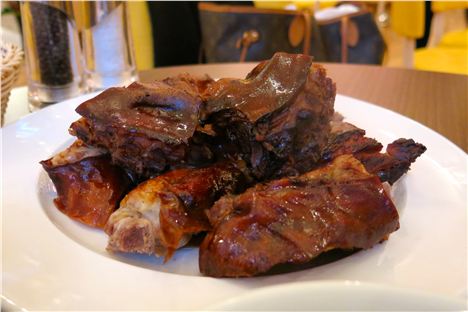 The wine list is Spanish and short. Vallemayor Rioja Crianza (£32.95) was described as ‘floral aromas with balsamic notes’; these descriptions baffle the Fat One, he noted ‘nice all round typical Tempranillo velvet, good finish’. The Viña Real Rioja Reserva was a tad overpriced at £53 but was nice to follow after the crianza, the step up is noticeable on the palette. If white is your game, there's a cracking value Raimat Abadia on at £18, which is also sold by the glass.

This restaurant is a welcome addition to the city. With Spanish two heavyweights soon arriving in Manchester like a steam train (El Gato Negro and Iberica) these guys need to concentrate hard for the next two months, winning punters before the others arrive. The wine list is not as good as Evuna, but the food is a couple of levels above in the main. It gives the two nearby Spanish chains on Deansgate a severe thrashing.

Gordo recommends: The lunch offer, any three starters (exc. Pulpo and Solomillo) for £12.95 or a starter and main course for £19.95.