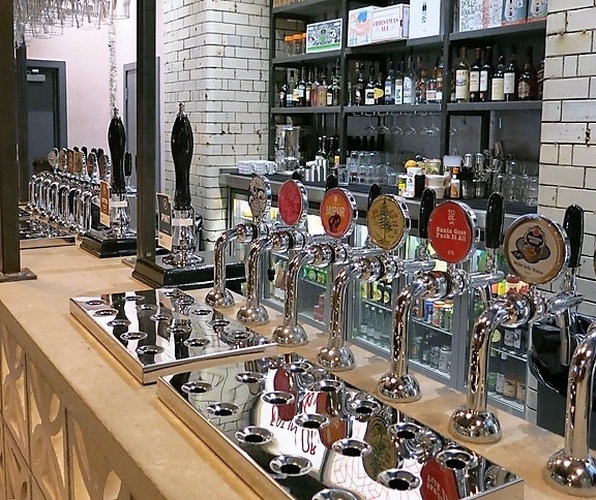 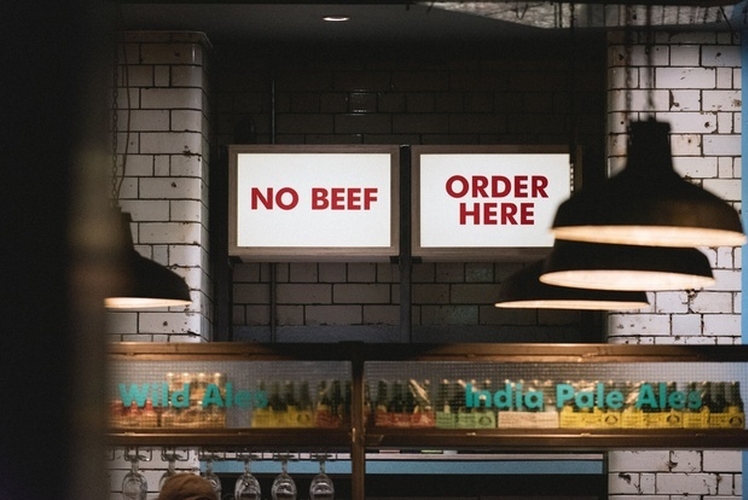 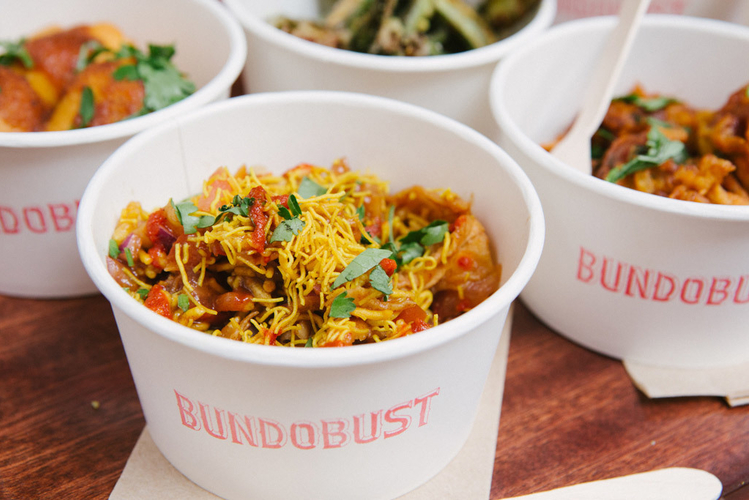 BUNDOBUST always had the ring of a Bollywood blockbuster about it as we patiently awaited its Manchester launch.

Now it’s here. Starring Bundo Chaat, Vada Pav and introducing Chole Bhatura. All of them real dishes and no beefcake in sight. On the evidence of a spicy ‘trailer’ at its pre-Christmas premiere the Big Bust was going to run and run. “Gujarati veggie meets craft beer in a real thriller” – The Daily Bhaji.

Not that this canteenlike newcomer from Leeds in a basement off Piccadilly Gardens is sprinkled with the stardust of Asha’s restaurant up on Peter Street, trumpeting its global association with Indian film royalty Asha Bhosle.

Bundobust’s vintage Bollywood posters are there just to glitz up a white tiled, industrial, underground setting, once a purgatorial Chinese buffet, now a colourful space under a towering glass atrium skylight. Alas, the name doesn’t mean Kapow! or Warlord! It’s merely a tidy Hindi phrase for “arrangements” or “organisation”.

Inspiration would be a better translation to sum up the serene marriage of Street and Hop created by Bradford buddies Marko Husak and Mayur Patel, its groundbreaking courtship on Mill Hill, Leeds, now to be fully consummated across the Pennines. Well that’s the plan.

The emphasis on the food in the Manchester offshoot – you can’t just buy a beer on its own, there are menu greeters as you arrive – may perhaps be down to licensing necessity but it’s a daring shift. I know it, you know it, the Metrosexual food-faddists and anti-Manc Michelin killjoys all know it, this city loves a bar first and foremost. And that glorious counter shimmering at the end of the room yells Bar, Drink Beer Here or Exotic Indian Cocktail, Come and Sip Me.

It’s no hardship, though, to grab yourself a token tub of okra fries (£3.50) or a £4.50 Bundo chaat (one of my Desert Island dishes) and then rampage through the enticing beer range on the blackboard. Compared with cramped Leeds there’s far more space for keg lines and even a couple of handpumps dedicated to Manchester breweries, Blackjack on the night we were there, offering its Black Maria black IPA and Deerhunter pale coffee saison.

Beer is Marko’s sphere of expertise, honed at his Sparrow bar in Bradford. On the back of my early enthusiastic review, but probably not because of it, a whole stretch of that blighted city regenerated into hopster heaven. Nowadays in Manchester, post-Port Street, Beermoth, Indy Man Beer Con and all, we’ve gone a bit blasé, but I remember the queues at the latter’s festival food village for a snack/beer combo from the the Bundo stall. So there is a market.

Count me in for the food alone, Mayur Patel’s small plate interpretations of veggie dishes from Prashad, his family’s famous Bradford (now Drighlington) restaurant, lauded by Gordon Ramsay. All the dishes arrive in coolly branded little tubs, costing £4 to £6 (£66 will buy you the entire menu range, to feed six).

Our plan was to celebrate – without succumbing to Dry January, obviously – the joys of Veganuary. Unable to resist the dairy-led charms of paneer and mushroom tikka, I fell at the first vegan hurdle. Ultimately, of the eight dishes consumed, only three were vegan as we kept missing the tiny 'vs' on the menu – and the abundant 'gf's.

I presume the only way the Vada Pav (£5) failed to be vegan was the brioche bun receptacle for this Mumbai take on the burger. It’s a real star as I hinted at the outset, a spicy, mashed potato ball, coated in besan flour and deep-fried, chutneys and hot chillies adding fiery relish.

There is a vegan take on South Indian staple Massala Dosa (£6), presumably involving the rice pancake mix, but we didn’t request the alternative. In truth, I prefer my dosa to be a vast lacy potato-filled parcel, not the two less than crisp mini-ones here, preferably with the chilli-flecked sambhar (lentil sauce) spicier and the fresh coconut chutney more intense.

Dogs are welcome, but unlikely to appreciate the Bombay Dazzler

The yoghurt-marinated, barbecued Paneer and Mushroom Tikka (£6), in contrast, was a meaty (sic) delight, powered by a red pepper ketchup and spinach chutney, while the steamed rice dumplings called idli were perfect fluffy cushions atop their thick sambhar of lentils and aubergine (£5). Years ago I bought an idli steamer in Rusholme, as you do, which I intermittently use at home, but not with the same light results, alas.

It’s best to order in small batches and go back for more. We’d preceded these ‘mains’ with a trio of lighter bites plus an Indian side we’d never encountered before – a sharp salad of bitter leaves, cucumber and shredded red cabbage in a lemon and mustard seed dressing called Kachumber Sambharo (£3 and definitely vegan-friendly).

Recommended as a counterpoint to the likes of the Bundo Chaat, that divine cold confection of torn samosa pastry, spuds, onion, turmeric noodles, yoghurt and tamarind chutney (£4.50).

Another favourite, kala namak and amchoor coated okra (£3.50) failed to impress this time round, fried to within an inch of its life, but another fry-up, the charmingly titled Onion Gobi Bhaji Bhaji, combining onion, cauliflower and spinach in its battered shell was spot-on (£4).

The beers I can recall drinking all were a perfect fit. The pick their floral wheat beer, Bombay Dazzler, tailor-made for them by great Leeds brewery Northern Monk (£4.40 a pint) and our own Chorlton Brewing Co’s Mosaic Citra Double Sour, headily fruity hops just relieving the Gose-style astringency that so stood up to the spice and chilli. Ouch at £3.60 a half, but it is 8.5 per cent and quite remarkable.

Food aside, Bundobust is still all about beer, far more than all those random newcomer bars springing up to cash in on our craft ale and beer hall cravings. This is proved by the hiring of Alex Parkinson, a fine indie brewer, as beer sommelier. I love this attention to detail, proof if needed that Bundobust 2 – The Sequel is not one of those “rolling out the concept” things, but a star in its own right.