LONG AGO, a Summer holiday meant ten days at the English seaside where it always rained and the sandwiches contained real sand. Then the airlines started to ferry us out to foreign parts and we ended up fighting off grizzly hangovers on Spanish beaches by day and then reinstalling them by night.

Spanish ham seems outlandishly expensive until the moment you taste it

Until recently we never paid much heed to tapas and never gave much thought to Spanish food in general. The idea that a modest plate of thinly cut, dried, ham could have a price tag of £20 was a real puzzle. Now Spanish restaurants are found across Britain and the idea of a succession of small courses is par for course (you can always tell when a particular cuisine is making an impact because it ends up in the supermarket chiller as a ready meal).

London is home to a great number of tapas operations from the very trendy and very crowded, like the Hart Brothers’ Barrafina; to dimly lit old-stagers like the Rueda chain. Meanwhile the Ibérica group has quietly been going about its business and has just added a fourth branch tucked away behind Farringdon Station.

The latest link in Ibérica’s lengthening chain will be Ibérica on The Avenue in Spinningfields. 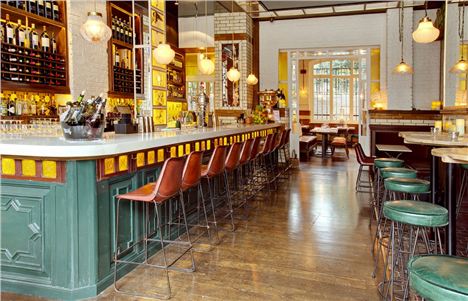 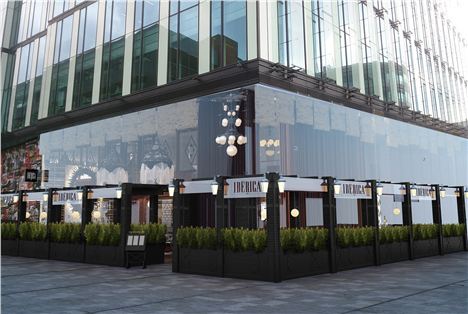 There is an underlying honesty about good tapas – you want ham, you get ham… no garnish, no miniature salads, quality counts. On Turnmill Street the designer has done a very good job on Farringdon Iberica, high ceilings, wooden floors, large rooms reduced to a manageable size by tall screens. As you walk in four different hams are lined up on the counter awaiting the carver’s knife. There’s a long bar with a Mahon beer font (a rather good, well-hopped lager), all seems cool and comfortable.  The drinks list flits from seven “Speciality Gin and Tonics”; to ten different sherries; half a dozen Sangrias; several cocktails; and a decent wine list with several steadily priced bottles – if you like white, lean towards the Albarino.

Spanish ham seems outlandishly expensive until the moment you taste it – Ibérica offer three Ibérico Jamon all priced as a half (30g) or a full portion (60g) and ranging from £8/£16 to £10/£20. They are all very sweet and deliver a great Umami hit. The perfect nibble with a glass of sherry. Or try the “Jamon Serrano Teruel” this comes from a large white Spanish pig, cured for sixteen months, and is particularly mild and low in salt (£9). 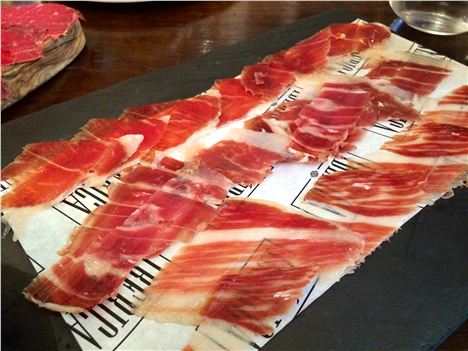 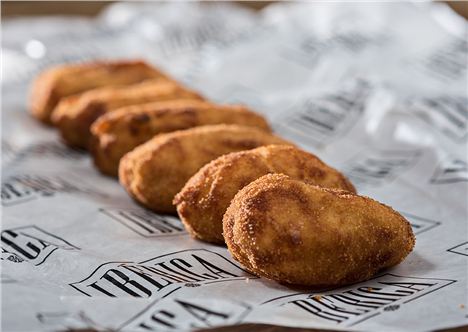 Then you pick some dishes – three or four per person depending on your greed factor. Patatas brava (£5) come with aioli sauce and while these spuds are not very brava, they’re good ballast. Then there are the Padrón peppers (£6), these are small green chilli peppers and one in twenty is very hot indeed – piquant roulette. Another staple is the croquettas (£6/£10) deep fried to give a crisp outside and a melting béchamel and ham goo inside. Or perhaps fried squid with aioli appeals (£9)? Good and crisp.  Underpin everything with Pan Tomate (£2) tomatoes on toast, impressive ripe tomatoes. 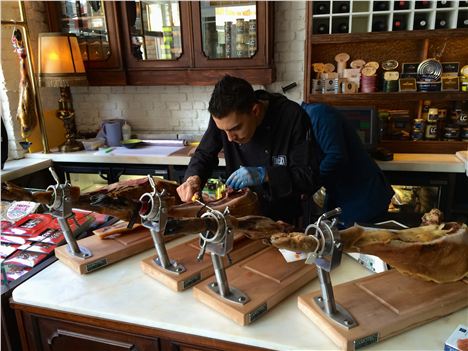 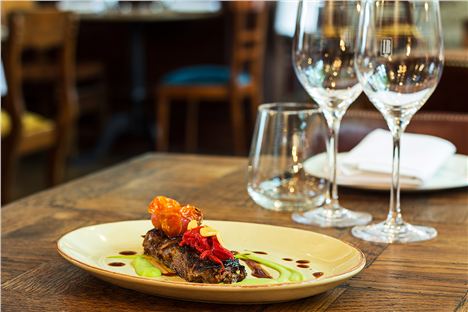 The menu leads you on to some more elaborate dishes, such as lamb sweetbreads, two way egg and roast red peppers (£6) – a well cooked dish, the sweetbreads delicate and plenty of rich flavours. If you’re pushing the boat out there’s the 'crisp confit of Segovian suckling pig, apple purée and frisée salad' (£15/£24). And there are plenty of fishy options. The Spanish cheeses are worth investigating.

The menu is long enough, and diverse enough, to offer something for everyone. Service is slick and helpful, the prices are well-judged. Start with a handful of dishes, remembering that you can always order more. The menu is devised by renowned chef Nacho Manzano, who has a two star Michelin restaurant in Asturias, Spain.

Ibérica Spinningfields will open on The Avenue in early-2015.