'Not a jar of Dolmio in sight' - Ornella’s Kitchen, Denton, reviewed

When discussing death row meals around the dinner table (my favourite ice-breaker), my main course will always be some sort of creamy, silky pasta dish with enough parmesan and black pepper to sink a gondola. Dessert is always my Mum’s crumble.

So, when I heard that a little slice of Italian indulgence was coming to Denton, I hit that follow button on Insta faster than I could devour a ricotta cannoli.

Ornella’s is a deli-come-restaurant right on the main road, and when we arrived for dinner at the last available table, the whole place was filled with gals catching up about their summer hols and the latest episode of Made in Chelsea. The restaurant feels like you’re sitting in someone’s front room, in a good way, with vintage posters and shelves stacked with biscotti, risotto rice and Baiocchi cookies. Bliss.

There’s a deli counter with pastries, porchetta and pecorino, and two chalkboards with a filled focaccia menu and the coffee list. You forget that you’re in Tameside as soon as you walk through the door, and the little wooden tables give off that intimate, European vibe that makes you want to order an espresso and wear cat eye sunnies.

We ordered two Aperol Spritz (£7.50), because when in Denton, and the orange glow encouraged us to sit back and manifest that we were actually in Capri. A thick slice of orange enhanced the flavour of the apéritif. We opted for fried ravioli (£4.50) and nduja and mozzarella arancini (£3.90) to start. Bring on the carbs, Ornella.

The arancini had a crisp, shell-like coating and oozed with cheese when I sliced it down the middle. The accompanying hot honey dip is the kind of condiment you could drizzle over a whole loaf of ciabatta and then eat like you’re feral, but we dipped delicately because we were in public. The nduja flavour is nowhere to be seen though, the filling lacking that fiery kick of spreadable sausage.

We had chosen fried ravioli out of sheer curiosity, but it was dry and mealy, and, in my mate's words, “taste like a weird Italian gyoza”. The odd morsel of sun-dried tomato added substance to the ricotta filling, but the pesto dip could’ve done with more parmesan for a salty kick to cut through the garlic. Note to self, always boil your ravioli.

Attempting to fulfil my death row meal dreams, I had creamy pork sausage pappardelle with crispy shallots (£8.90) and my friend had rigatoni amatriciana with crispy guanciale (£7.90). A side of truffle and parmesan chips (£3.90) was also added in an “eyes bigger than our bellies” moment after seeing them arrive on the table next to us.

This place has nailed the perfect pasta portion size, avoiding that uncomfortable carb coma, and the crockery is lush. The pappardelle was subtly creamy with hints of sage and plenty of well-seasoned meat to weave your ribbons of pasta around. However, after a few minutes, the oil in the sauce separated, making the last few mouthfuls greasy and heavy. Bonus points for crispy shallots, but the sauce could do with being a bit thicker.

The rigatoni was rich in tomato, chilli and onion, with a balsamic sweetness and smoky hunks of guanciale fat on top. Not a jar of Dolmio in sight. However, the pasta itself was way too al-dente, with the shapes becoming tough to get through despite the liberal helping of tomato sauce. Just four more minutes would've made the world of difference.

Chips were skin-on, crisp and obviously homemade with a fluffy centre and that perfectly imperfect appearance. The truffle and parmesan should be distributed more evenly though, as we’d run out of the good stuff after the first few fries - put 'em in a bigger bowl and give it a quick shake.

The staff are a bit too eager when attempting to clear the table, with both of our plates still half full when they offered to take them away during both courses. They were friendly and polite, but a bit rushed, and we explained that we’d just come up for some air and a sip of Aperol.

For pud, we asked for the pistachio and raspberry profiteroles (£4.90), but they’d run out. Gutted. They’d also run out of the burrata with zucchini, cucumber, hazelnuts and honey vinaigrette (£5.90) earlier in the evening, but there are plenty of other Italian goodies to sub in instead.

With our dreams of profiteroles dashed, we ordered a Sicilian bun with pistachio gelato (£4.90) to share, and neither of us said a word for a good 15 minutes. The smooth, sage green gelato was all wrapped up in a fluffy little bed of glazed brioche with a garnish of crushed nuts, and my reaction was very similar to the time I tried Rachel Stockley’s ube ice cream. Absolute pudding heaven in Pantone shade 13-0116.

The bill for the two of us came to £49, which is cracking value for money for a weeknight dinner for two. You’re not in the centre of Manchester here - or the centre of Tuscany for that matter - and that’s reflected in the price and the quality of the food. I nabbed the very last table on a Wednesday night when I called the day before, so it's clear to see that Ornella's is a local fave. Along with The Orange Tree tapas and the Thai restaurant on Ashton Road, this place is supporting Denton's dining scene one portion of pappardelle at a time. There are tweaks to be made, but I drove back to Castlefield full of cheesy, carby, creaminess. 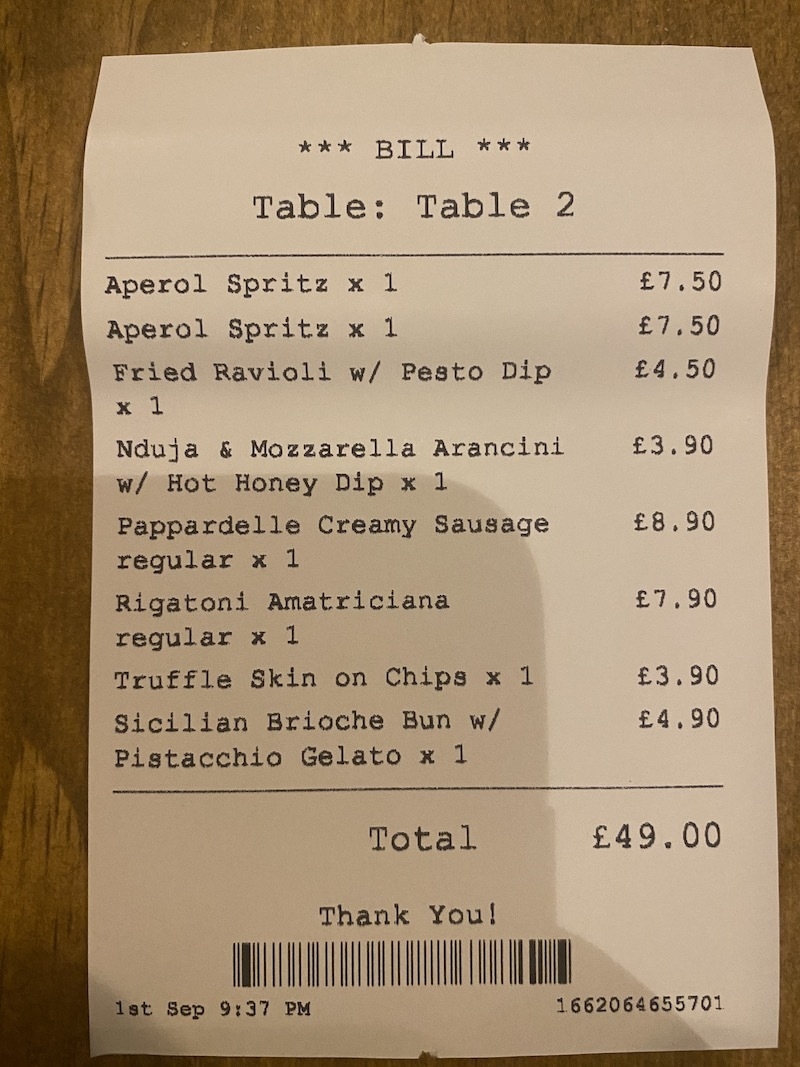