It would get a bit tedious to review all the pizza places in Manchester but Nell’s new standalone in “garden neighbourhood” Kampus demands a visit. This New York-inspired pizza brand made its name over at Northern Quarter old-timer Common - see “substantial meal gate” - and still operates the kitchen there and in The Beagle, Chorlton. It’s also had a bash at frozen pizza.

All concepts of portion control go straight out of the window

Nell's new home, Kampus, is one of the many property pies currently being, er, fingered by Capital & Centric of Manctopia TV show fame. An overhaul of a once-grubby patch at the top of Canal Street. Little David Street has been revived providing a charming fairy-lit cobbled path to Kampus from Chorlton Street which has Sheena Simon music college and the National Express bus station as its other claims to fame. It’s good for the area, Canal Street has many charms but quality dining options has never been one of them.

Kampus is still developing, with Cloudwater, Great North Pie Co, Pollen and The Beeswing arriving there later this year. Its security cabin on stilts has been home to pop-ups from Higher Ground, Tine, Banh Vi and current resident Breadflower. It’s not buzzing with people just yet - a lone picnic table of cider guzzling young goths (perhaps migrated from Urbis) illustrates the point. The developers clearly expect this to change. Nell’s unit is suitably massive for a place known for the magnitude of its pizzas.

The space is bright and airy with Brutalist concrete pillars lifted by pops of colour, orange is a big one. Very Manchester. It feels like a restaurant but you have to order at the bar. The staff we talk to are smiley, helpful and hip but we miss the opportunity to have a natter that proper table service brings. It also means we wait quite some time for someone to ask if we want desserts or our leftovers boxing up before realising we need to go back to the bar for that.

It’s Monday so a couple of Low-gronis and a Peach Tea Spritz (all £6) satisfy half the team while others get stuck into a pint of Schofferhoffer (£4.50) and a can of Flensburger (£3). These are “low” rather than “no” and both are somewhere on the Shandy Bass flavour spectrum. I’m partial to a lager top so no complaints from me but you might prefer something drier.

I’m taking the editorial team out for dinner so all concepts of portion control go straight out of the window. You can choose from 22” or 14” whole pies (cue wisecracks from my lot about how many inches they can handle) or grab a few daily changing slices.

A minor grumble is the lack of lighter side dishes or starters - a salad or slaw would be welcome. A charcuterie platter (£8) is merely serviceable but its accompanying quick pickle brings some of the zingy vitamins we crave.

Nevermind that though, Nells is pizza Nirvana. In that, it takes familiar ideas and makes them edgy in a way that gets a whole new generation excited.

Take the greens pizza (£14 per 22” half - see receipt below for convoluted pricing structure). I love that bitterness you find in things like chicory, kale and Campari and these leaves deliver that in trowels. Mix this up with creamy garlic, smoked Lancashire cheese and a bit of chilli and you’ve got a top ten disc on your hands - smells like green spirit?

A pepperoni based Do You Roni Honey? (£16 per 22” half) and an upside-down margherita (£12 per 22” half) are both fine cover versions that improve on the originals - unlike those awful twee advert ones. The latter is a good choice if you don’t like too much tomato sauce as it’s spiralled on top of the cheese rather than lurking beneath, this makes for a less soggy slice. Fresh basil adds perfumed class. The former would be fine without that ubiquitous hot honey.

Hawaiian (£16 per half) is a bit divisive. None of us balks at pineapple on a pizza, you may be surprised to learn, but half the team feel it has too much topping, particularly the (very nice) ham, making it a bit heavy and hard to eat more than a slice, the other half are all, “the more the better”. The green chilli could have been a bit louder for me.

A 14” vegan friarielli (£15) doesn’t look as appetising as its udder-bothering big brothers. The thicker base raises concerns that the wafer crunch appeal of the 22s might be lost. Let’s skip the vegan cheese chat. This pizza hits us like a Dave Grohl drum fill. Friarelli ticking that bitter green box again, balanced with a sweet pepper sauce and chunks of very convincing “sausage”. We agreed it was the best vegan pizza we have ever tried.

By the time we get to the ‘Chovy (£4 a slice) - basically puttanesca on a pizza base - it’s gone cold and soggy and whatever the rules around fish and cheese, we all agree cheese would have improved things. The lesson here (yet again Kelly, yet again) is that you do not need more than two 22” pizzas for five people.

Surely there’s room for an ice cream factory or two here but dessert in the form of ice cream sandwiches (£5 apiece) look a bit mass-produced wrapped in paper with nutrition stickers on the back - a style choice I’m sure. The discrepancy in size between red velvet and salted caramel iterations almost causes a quarrel but they aren’t too over-facing after all that pizza and work as a very on-theme palate cleanser.

All in all, it’s a yes from team Confidentials. This is a pizza bar designed for socialising. It’s not cheap, but the ingredients are excellent quality and I’m very much of the belief that you get what you pay for. Nell’s will be even more of a destination once Kampus is fully in bloom. 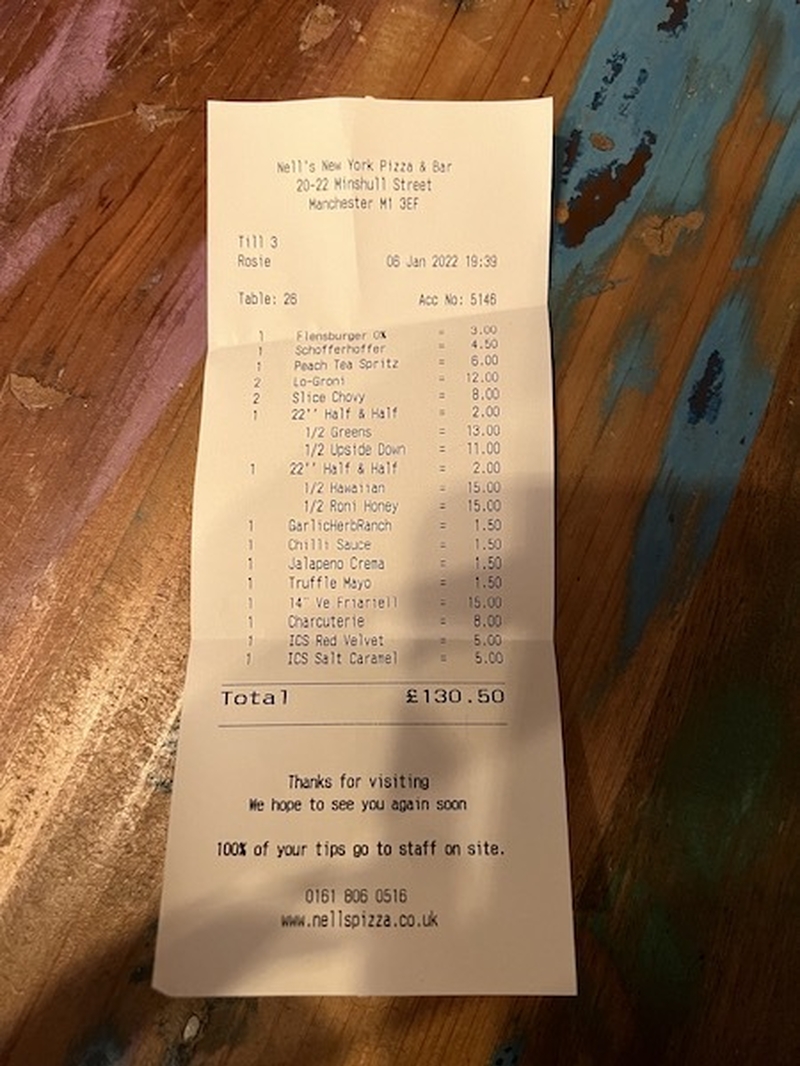