More new restaurants and bars to open as Manchester blossoms

Gary Neville's new gaff, craft beer and 'the most authentic tacos this side of the Atlantic'

It seems like mere minutes since we wrote our most recent feature on new restaurant and bar openings in Manchester and beyond. In fact its been three whole months since we spilled the tea on the latest bougie bars and indie outfits so it's time to top up your must-try list with some more secret and not-so-secret goodies.

As Manchester bedecks itself in spring blossom, new bars and restaurants are peeping out, budding in the most unexpected places. From a glamorous rooftops to a restored railway station house, party bars to eco-friendly cocktails, rude waitresses to brewing physicists, this quarter's new openings are anything but humdrum.

Read on for some new bar and restaurant openings you might not have heard about.

What: Bird of Prey

With the recent hype around one of Escape to Freight Island’s newest arrivals, Lucky Foot chicken shop, the owners of Bird of Prey really have their work cut out to rule the roost. So-called “chicken freaks” the Bird of Prey offering will include everything from chicken wings and milkshakes to chicken and waffles and homemade sauces. All from a cosy shop tucked underneath the Vita Living student accommodation on Charles Street - right on the edge of Circle Square (can square circles have edges?). We look forward to seeing how its “secret method” for dredging and frying chicken stacks up against some of Manchester’s fried chicken legends.

Liverpool coffee shop Bold Street Coffee is spreading out further into Manchester with a second spot at University Green. Following on from the launch of its first outpost beyond Scouse soil on Manchester’s Cross Street, outpost number two will touch down on Oxford Road in September bringing with it a trademark mixture of speciality coffee, pastries, BSC fries, boxes, bowls and of course, the infamous buoy brunch sandwiches. They’ve just ran a competition giving away free coffee for life. Expect more of that too.

If you’re always sippin’ on an espresso martini and wishing everything was a bit more eco-friendly, Blinker will soon be your new go-to. Opening up in Spring Gardens right by Black Sheep, Blinker is set to feature up-cycled furniture, sustainable fittings, and a seasonal cocktail menu that focuses on great British produce. Set up by Dan Berger (the former bar manager of London’s The Ned hotel) and Gordon Ramsay’s restaurant group, the name Blinker is inspired by the classic cocktail of rye whiskey, grapefruit juice and raspberry syrup. The menu is mainly centred around classic cocktails done well, but twists on four tipples per month will be inspired by whatever ingredients are in season.

Oh goody, another London brand heads to Manchester. It's been announced that Chotto Matte will open on the enormous rooftop at Gary Neville's St Michael's complex. The glamourous restaurant specialises in a unique marriage of Japanese and Peruvian food known as Nikkei. The word Nikkei is used to describe Japanese people living outside of Japan but is also the cuisine developed by Japanese migrants combining indigenous ingredients with Japanese techniques. It's most famously the basis for Nobu's menu (indeed, head honcho Kurt Zdesar used to be a director there) but the short-lived Shoku in Salford tried to bring this concept here a couple of years back. In terms of the restaurant aesthetic, think conspicuous consumption along the lines of Tattu or Ivy Asia and you'll get the idea. We'll leave you to decide whether that's a yay or a nay.

“The craft beer bar that craft beer drinkers deserve”, Joule is named after James Prescott Joule, the Salford-born physicist who invented the thermometer. Turns out Jimmy was a bit of a brewer too, and in the process of fermenting his beer found just the heat source he needed to revolutionise science and industry. Nestled at the foot of Halogen House on Chapel Street, this craft beer shop and tasting room will bring the indie beer scene to Salford. And with a natty geometric logo featuring hops and lightning bolts, Joule will surely get sparks flying across the River Irwell. Not to be confused with the physics labs at the University of Salford, which bear the same name.

Good service can really make or break a restaurant. So a restaurant with the sole premise of having extremely rude staff is an interesting approach. Karen's is a pop up coming to Prestwich with servers acting the role of nonchalant, bad-mannered staff in order to "bring out your inner Karen". The food seems to be a bit of an afterthought, average-looking burgers and shakes but that's because this one is all about the experience, man. We'll let you know what we think when we check out a preview soon. Keep an eye on our socials for that.

The barest glimmer of spring sun calls for beer and tacos, stat. We reported back in March that Liverpool's Madre would be wending its way to Kampus just in time for the rain to clear and rays to poke through the clouds. Once they open their doors you'll be able stock up on all the birria, cerveza, crab tostadas and (hopefully) Vitamin D your heart desires. This funshine taqueria is a collaboration between the people behind Belzan and the folk behind Breddos Tacos and currently has a main site at Liverpool's Albert Dock - our reviewer called it "dangerously good".

Ru Paul released his new album Mamaru in Jan this year, and Deansgate is welcoming Mama Roux’s in the summer, coincidence? Probably, yes. Due to open up right next door to Point Blank Shooting on Deansgate, Mama Roux’s is a proper party bar with the usual bottomless brunch offerings, disco-themed roasts and a migraine-inducing aesthetic. The kitchen will be run by the team behind Birmingham-based bbq specialists Broken Bone BBQ, and the cocktail list includes crazy combos of tequila, sprinkles and whipped cream. The Mama Roux’s happy hour also means that you can bag two cocktails for a tenner. If you’ve got something silver and sparkly shoved at the back of your wardrobe, dig it out in time for this Deansgate disco bar opening. Tunes are also a central theme with disco and house dominating the Mama Roux’s setlist. 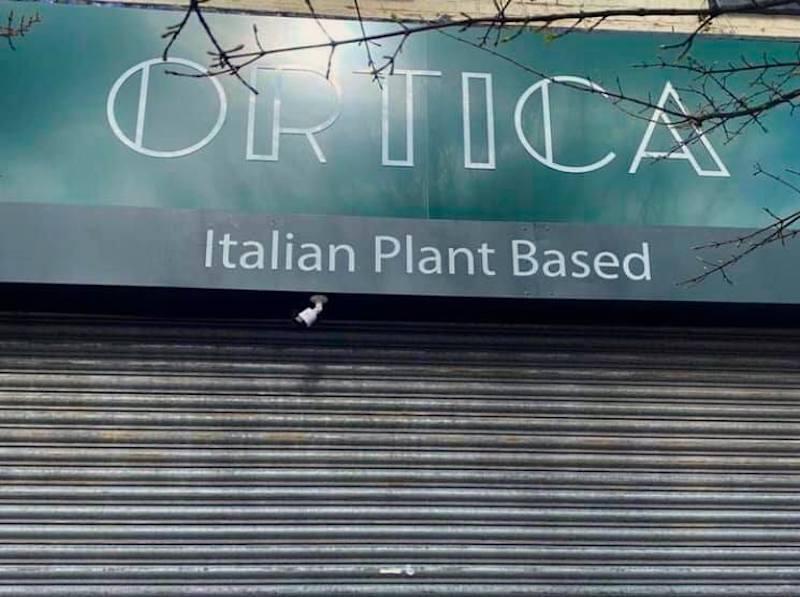 There's not much information on this one yet, the restaurant has recently unveiled its sign but doesn't have a social media presence at all. Ortica means stinging nettle, which is not the most appetising name for a restaurant, even though nettles are actually delicious and we hope they make it onto the menu. We're expecting this vegan Italian restaurant to take full advantage of the magical ways that Italians have with vegetables, herbs and copious amounts of olive oil.

On one of your countless walks through town during lockdown I/II/III you might have noticed a little red door peeping out around the back of Peru Perdu on Princess Street. It wasn’t heavily publicised, but from there you could purchase takeaway pizzas and a few select groceries. A little chink of happiness in the otherwise joyless monotony of day-to-night. From the looks of a new-ish Instagram page, it seems that the little red pizza door could be back on, with the addition of panzerotti (deep-fried Southern-Italian mini calzoni) and gelato. Leading in its bio with “Casual dining & to go”, it means we might have a new restaurant on the cards - the question is, will it replace or sit alongside Peru Perdu? A parilla asado is described as a big social event - akin to a traditional Sunday roast - cooked over a parrilla grill heated with wood or coals. An interesting way of cooking pizza, but one that we could easily get on board with.

Romance and coffee. What’s not to like? Chapel Street’s newest coffee shop is a very much a labour of love. Founders Daniel Haralmbous and Ilaria Criscuolo fell in love with each other whilst travelling Italy and Amsterdam together and also fell head over heels for speciality coffee along the way. Spotting a notable hole in the market for a quality coffee shop with indoor seating on Salford’s Chapel Street, they decided to launch Procaffienated. Inside its all above simple, airy interiors, plenty of seating and the smell of fresh bread which they bake in-house. Expect Mediterranean-inspired brunch, acai bowls, speciality coffee and sweet treats.

A true labour of love from the people of Levenshulme, Station South has opened up after nearly five years of crowd funders, construction and local fundraising. Having opened up at the end of March, the spot is everything from a cycle cafe to a bar and an urban garden to a restaurant. Restoring the former railway station house that sits on the Fallowfield Loop cycle path, the project now functions as a break spot for cyclists and locals walking the scenic seven-mile route. It also has the potential to become somewhat of a community hub for Levy thanks to its airy interiors, smoked mackerel kedgeree and music-filled events calendar.

If you want to show your Stretford cred, tell people you used to bob along to Stretford Canteen back when it was at Pines Pantry, reinventing wipe-clean menus into chic bistro white table cloths. Along with the Sip Club and Bistro 116, Stretford Canteen sowed the seeds for the culinary reinvention of Stretford, which, while still a work in progress five years later, is starting to bear fruit. So it's fitting that this Europhile outfit has found a home in the Mall, which will be the site of the next phase of transformation, courtesy of Brentwood. As for the Canteen, expect classic French cooking with a relaxed feel and the best of local produce that featured in its original iteration. Welcome back Canteeners.

What: That Burger Place

By the time Salford burger David, That Burger Place, has faced the burger Goliaths at The National Burger Awards it could well be opening a new location that comes with the tagline "the UK’s best burger". Even if That Burger Place doesn’t win, we’re still proud of the Salford lot for flying the Manc flag at the burger Olympics. We’re excited to check out the new spot too. First and foremost a burger bar, the newest of three locations will fit 30 people with the added bonus of a video game machine. The current TBP menu will continue but owner Ryan has teased that burgers and sides inspired by the burger chain’s Youtube channel could well appear. Keep your eyes peeled for a watermelon ketchup from a certain man famed for music and Mondays.