Where is it? What does it look like on the inside? And how much does it cost to live there?

Manchester is in the midst of a construction boom. But then, you already knew that. You've seen the cranes, you've read the press, and you've almost definitely been stuck behind a digger at some point.

According to recent figures, there are 125 sites now under construction across the city. In which case, you'd be forgiven for losing track of what's going up and where.

For that reason (and because we've just upped our video budget), we've decided to go behind the scenes of some of the city's major developments, talk to the people behind the projects, get a sense of what's going on and where, and just generally stick our noses in and have a good neb around.

For our first crack at it we wanted to go BIG, so booked in to meet Nicola Wallis, sales and marketing director of the Scarborough Group, which is in the process of building a whopping great new neighbourhood called Middlewood Locks on a 25 acre plot just west of the city centre.

You can watch the full video tour above and see a few questions answered below.

Middlewood Locks is a brand new neighbourhood on the edge of the city centre comprised of a dozen or so blocks offering apartments, townhouses, gardens, offices, a hotel, restaurants, bars, shops, a gym, a car park... oh and there's a canal running right through the middle of it.

It's located just off Trinity Way on Middlewood Street and East Ordsall Lane, right on the Manchester, Bolton & Bury Canal.

It's being developed by the Scarborough Group, which is also behind the Hat Box in Ancoats. Scarborough - who own half of Sheffield United Football Club - have 50%, while Metro Holdings of Singapore and the Hualing Group of China each have 25%.

How big is it?

Big. Really big. 25 acres to be exact, with 2,215 new homes and 900,000 square feet of commercial space, which makes it the largest residential development in the city (they say).

When will it be finished?

Phase one (570 apartments) is now complete and the first residents have just moved in. Phase two is currently under way. Phase three and four and expected to complete in the mid-2020s. So there's some way to go yet.

How much does it cost to live there?

How big are the flats?

Popular Salford brewers Seven Bro7hers have announced plans to open their second craft beer bar in Middlewood Locks, following the success of their debut bar on Ancoat's Cutting Room Square. There's also going to be a Sainsbury's, you know, for milk and that.

Oh, and train nerds will love the view of the newly opened £320m Ordsall Chord bridge - the world’s first asymmetrical rail bridge (whatever one of those is).

Restaurant no shows – What can we do about it?
● / Property 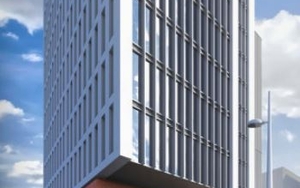 Deansgate Manhattan: Another tower to hit the skies

Jonathan Schofield on the rise and rise of SimpsonHaughville

Deansgate Manhattan: Another tower to hit the skies
● / News