It’s that time of year again when the flogging of tyres goes turbo in the name of restaurants. That’s right. The stars, bibs, awards and guide have been decided by Michelin for 2022 and the scene for Manchester, Liverpool and Leeds looks rather similar to last year.

With the new bibs swerving the north of England completely this year (Norfolk was the most northerly they got outside of Scotland) and the closest specialist award to Manchester popping up in Aberystwyth (Opening of the Year - SY23), it always looked as if there was going to be minimal movement in the North West's main cities.

There were additions nearby however, as Simon Rogan's L'Enclume scooped an unprecedented third Michelin star as it celebrates 20 years in business, whilst The Barn at Moor Hall - the informal sibling of the two-starred Mark Birchall restaurant - received its first star. Moor Hall itself scooped a brand new green star. Not far from Moor Hall in Aughton, Sōlō by Tim Allen that only opened late last November was added to the guide - read Gordos' review of Sōlō to see what he made of it.

The Dog and Gun Inn in Skelton and Pine in Northumberland (recently fawned over by Marina O'Loughlin), the latter also receiving a green star, were the only other northern new additions to the six new English Michelin stars outside of London. A total of 19 stars were announced in the UK and Ireland.

16 Greater Manchester restaurants are in this year’s guide including the likes of city centre restaurants Erst, Simon Shaw’s trio of El Gato Negro, Canto and Habas as well as places further afield like Osma in Prestwich and Perfect Match in Sale. District was a new addition whilst 20 Stories dropped out.

In Manchester, all eyes were on Simon Martin’s Mana, the only restaurant in the city currently boasting a Michelin star.

After allegations of staff abuse and fabricated CVs were made in an article by The Mill (The Times, Telegraph and Daily Mail all followed up the story), some questioned whether Mana would be stripped of its star, but it remains intact.

In a statement to Confidentials, a Mana spokesperson said, "Mana categorically refutes all of these false allegations.

"Since we opened in 2018, Mana has become a world-class restaurant of which Manchester can be extremely proud. We would also hope that Mana's customers judge us on our incredible food, not groundless speculation about the earlier career of a highly talented member of our team.

"If this speculation is a genuine concern for our customers, we would be happy to set the record straight on this topic with them, before, during or after their meals at our restaurant."

With a number of high-profile chefs across the UK accused of poor treatment of staff, it seems appropriate that staff welfare should be a factor that Michelin takes into consideration when awarding stars.

Despite strong rumours that this could be the year for The Art School Restaurant, Chef Patron Paul Askew was once again left disappointed. Liverpool does not currently have any Michelin star restaurants and in fact, the famous red guidebook has never deemed any of the city’s restaurants worthy of a coveted star.

The Art School's Paul Askew recently celebrated his 40th anniversary in food and drink, and can take some consolation with 18th place in the recent announcement of Harden’s Best UK Restaurants 2022.

Fraiche in Oxton has retained its long-standing gold entry in the big red book and remains the only Michelin-starred restaurant in the Wirral and Merseyside area.

Cheshire is no longer home to a Michelin star restaurant for the first time in more than 30 years. Simon Radley at the Chester Grosvenor has been removed from the Michelin guide - Radley announced his departure last year and the Grosvenor is relaunching as Arkle under chef Elliot Hill.

The removal of the Chester Grosvenor leaves Le Gavroche in London as the longest standing consecutive holder of a one Michelin star accolade.

No change in Leeds

A similar story played out in Leeds as no new stars were awarded. Michael O'Hare's The Man Behind The Curtain remains the city's only Michelin-starred restaurant whilst a total of seven restaurants make up this year's guide including the likes of HanaMatsuri, HOME, Hank's Oyster Bar and Dakota Grill.

Undoubtedly the story of the day remains Simon Rogan's third star which is an unprecedented achievement outside of London and the home counties - the first in the UK Michelin guide's 49-year history.

Elsewhere Moor Hall's green star is a welcome addition to a northern cohort that includes the likes of Stockport's Where The Light Gets In, Chester's HYPHA, L'Enclume in Cartmel and Tommy Banks's Black Swan at Oldstead. The Green Stars were introduced in 2020 for restaurants with a particular emphasis on sustainability.

Kanpai! A guide to the sake scene In Manchester
● / News

Manchester’s top eating out offers, deals and discounts: February 2023
What you say
Read Next
● / Food & Drink 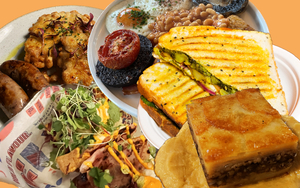 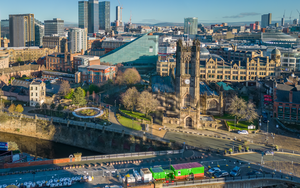 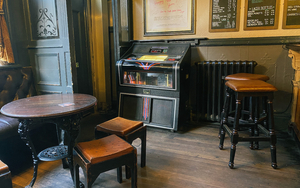